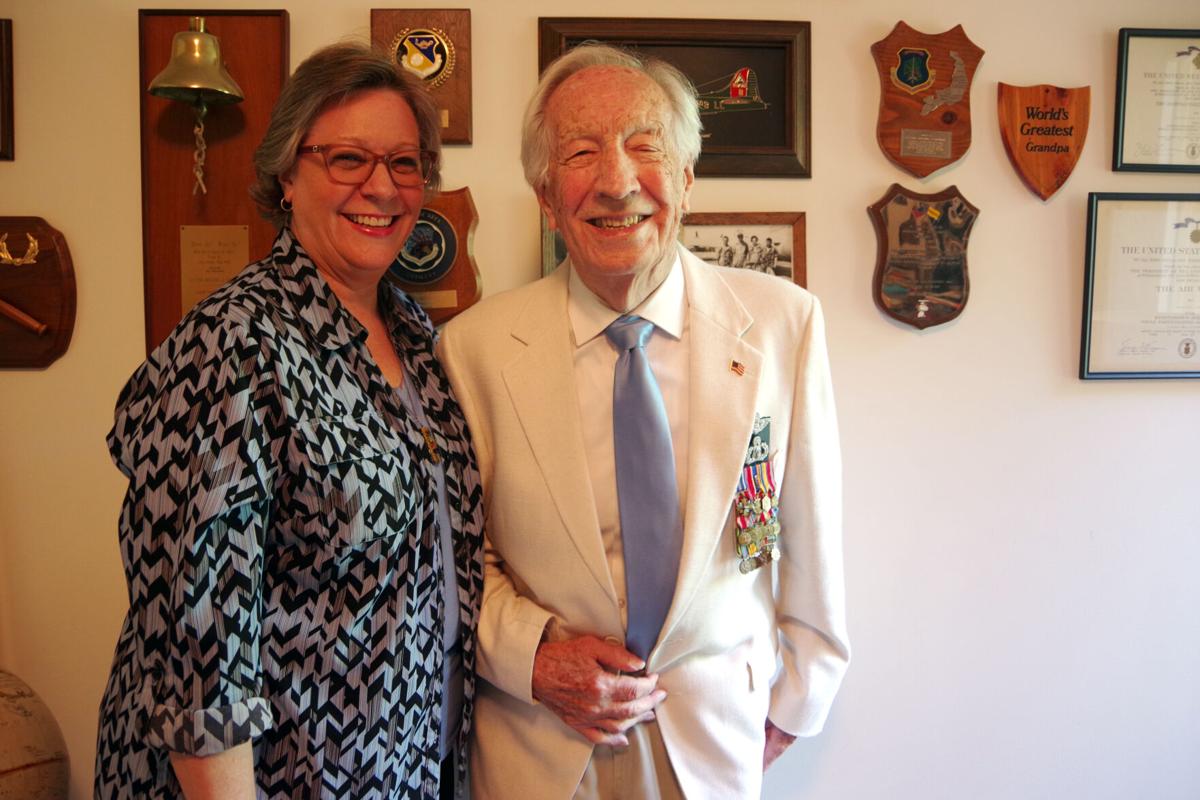 Rocky Gannon poses with daughter Patricia Balazs in his “Rocky Room” at his Darlington home. 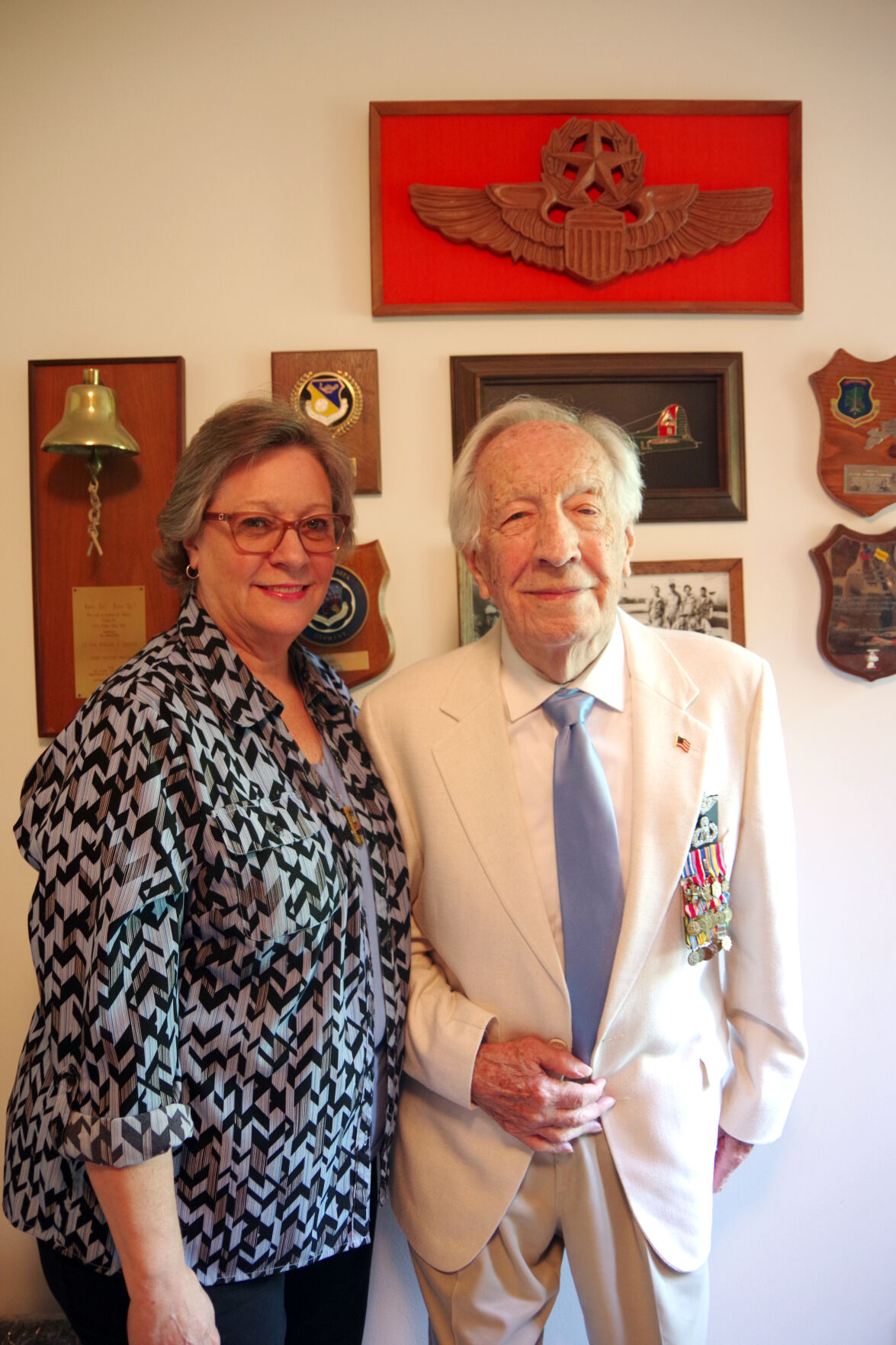 Rocky Gannon poses with daughter, Patricia Balazs, in his "Rocky Room" at his Darlington home. 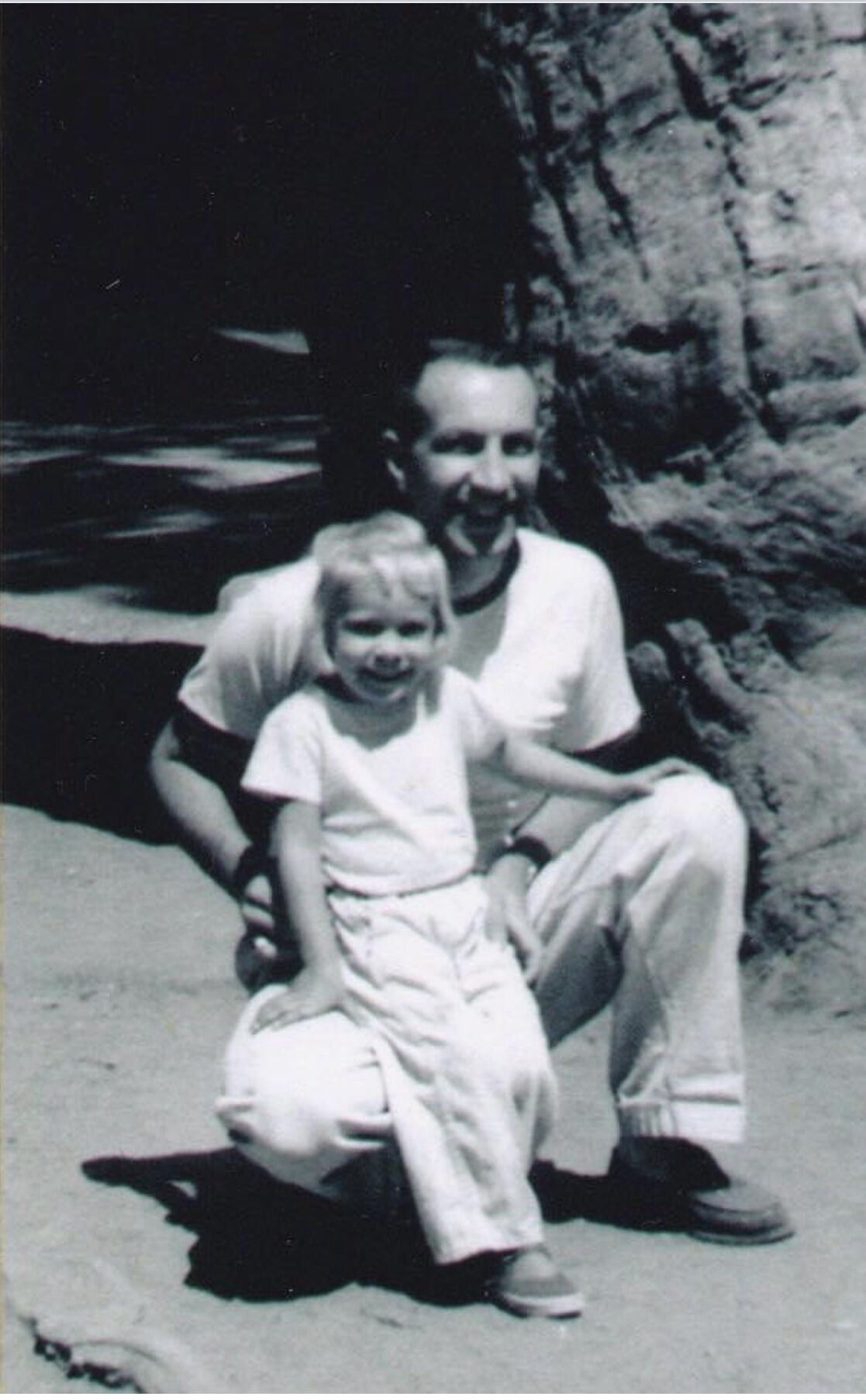 Rocky Gannon poses with his daughter Patricia in 1957 in Yosemite National Park. 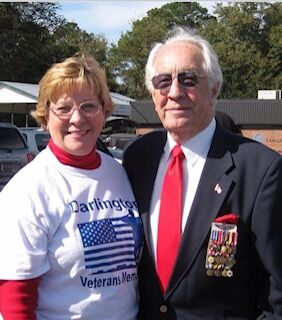 Patricia Gannon Balazs poses with her father, Rocky Gannon, in 2013 at the dedication of the Darlington Veterans Memorial.

DARLINGTON, S.C. – I am a brat! More specifically an Air Force Brat.

I was born on James Connelly Air Force Base in Waco, Texas. I carried a military dependent’s I.D. until I was 23 years old. I still have a set of my own government-issued dog tags.

I am the middle child of three. I have an older brother and a younger sister. Our parents are retired USAF Lt. Col. Rocky Gannon and Bert Gannon.

So, you may ask, what was it like growing up as the daughter of a career Air Force pilot?

We moved A LOT! Have I mentioned how much I hate the process of moving? I was 10 days old, and my brother had just turned 1 year old when Dad was sent to Korea. Our amazing mom flew with us to visit Dad’s family in Baltimore. Imagine that trip! After the visit, she loaded us into the car and drove us to Sumter to be closer to her family. Sumter is where she and Dad had met and married while he was stationed at Shaw Air Force Base.

Fifteen months later Dad returned from Korea. He likes to tell the story of the day he came home. He says I reached my arms out to him and called him “Daddy.” My brother, by then 2½ years old, walked up to Dad with a glass of milk in his hands, poured the glass of milk on Dad’s shiny military shoes, turned and walked away. For the next few weeks my brother called him “that man.”

These 15 months were my first Permanent Change of Station, known in the military as a PCS. Between then and my graduation from high school, there were eight more PCSs. Have I mentioned I hate moving? After my brother and I were in college in California, Dad, Mom and our baby sister made four more PCSs before Dad retired.

Despite hating to move, there was an up side to all of these moves. We lived in a lot of historically fascinating and beautiful places. After Sumter, we moved back and forth between California and Europe until I graduated from high school. Being a military pilot, Dad was away from the family most of the time.

When he was home, it was “family time.” He didn’t spend weekends playing golf, hunting or fishing with his buddies. Wherever we lived, he’d find someplace historical for us to go, because he was such a history buff.

This entailed a lot of camping. Every time we lived in California, we loved to camp in Yosemite National Park. I remember visiting Sutter’s Fort and Jack London’s home. During the summer, if Dad had an assignment in a western state, the whole family went. We visited both rims of the Grand Canyon, Donner’s Pass, the Petrified Forest and Buffalo Bill’s Museum.

Our first PCS overseas was the Normandy region of France (1959-1962). Dad was stationed at two different bases, and you know how I hate moving! Both bases were close to Paris. I remember camping at Normandy Beach, closest to Omaha Beach. We were young and got to climb around in the German pillboxes. Some pillboxes still had the artillery guns in them. I remember the beach was littered with tank traps and parts of military vehicles half buried in the sand.

We visited all of the American military cemeteries around Europe. We also visited castles and beautiful churches.

Our second PCS overseas was to Wiesbaden, Germany (1965-1968). As a family we revisited all of our favorite places from our previous tour. We revisited all of the sights in Paris, adding the Louvre. We were a little older, so Dad also took us to Verdun, Bastogne, Waterloo, Anne Frank’s home in Amsterdam, Brussels, Hitler’s Eagle’s Nest, East and West Berlin and cities in Spain and Italy.

Dad taught us to ski in Garmish, Germany. After that we had a ski trip somewhere every Christmas. I was lucky that Dad and Mom had another PCS in Germany after I finished college. I was able to go visit them, tour around with Mom and take some ski trips with Dad.

In 1968, I was in the ninth grade. We left Wiesbaden, Germany, and returned to California while Dad went to Vietnam. We wrote letters and sent cassette tapes back and forth, because there was no internet, social media or Face Time in 1968.

Dad had been gone nine months when we went to meet him for his rest and recuperation break, R & R, in Hawaii. The military gathered all the families together where we awaited the bus carrying the military personnel. I watched for my dad. When I saw him step off the bus it hit me! I realized that this week together might be the last time I ever see my dad. Over the years I’d had friends who had lost their dads in plane crashes. My dad had flown every week of my life and had always returned home. The reality of war had become real to me.

As an adult I can look back at the values Dad instilled in us. We say “Yes, Sir/Ma’am” or “No, Sir/Ma’am” to everyone. We were taught to show respect to everyone, no matter what gender, race, religion or rank. He shared his love of history, our country and its flag with us.

I feel at home in the company of anyone in a military uniform. I feel at home when jets or helicopters are flying overhead. My heart swells with pride when I see our flag or hear our national anthem.

Third in a series

The Morning News is seeking “Stories of Honor.” Readers are invited to nominate a veteran with a good story to tell.

Select stories will be featured each Sunday in the Morning News and at scnow.com through July 11.

The series will be followed with a commemorative special section on Sunday, July 18.

Nominations can be emailed to news@scnow.com (write Stories of Honor in the subject line) or mailed to: Morning News Stories of Honor, 310 S. Dargan St., Florence, SC 29506. Please include your name, email address, daytime phone number, the nominee’s name and branch of service. Also, please share the nominee’s story in at least 200 words.

FLORENCE, S.C. – For the first time in several years, flue-cured tobacco official variety trials (OVTs) are being grown in South Carolina this season.

FLORENCE, S.C. – Environmental concerns and insect resistance to pesticide use led to the adoption of a new approach to pest control – Integrated Pest Management (IPM) – in the 1970s.

CHARLESTON, S.C. – Lowcountry growers can learn the newest ideas and recommendations for successfully growing vegetables during the 2021 Field Day at Clemson Coastal Research and Education (REC) slated for June 17.

TONY MELTON: Feeding us and the world

Sixty years ago, I began working in horticulture. I assure you I did not know what horticulture was or how to pronounce it but, I was old enough to pick vegetables and, I quickly learned if a tomato, cucumber, bean or pea was ready to harvest.

Rocky Gannon poses with daughter Patricia Balazs in his “Rocky Room” at his Darlington home.

Rocky Gannon poses with daughter, Patricia Balazs, in his "Rocky Room" at his Darlington home.

Rocky Gannon poses with his daughter Patricia in 1957 in Yosemite National Park.

Patricia Gannon Balazs poses with her father, Rocky Gannon, in 2013 at the dedication of the Darlington Veterans Memorial.