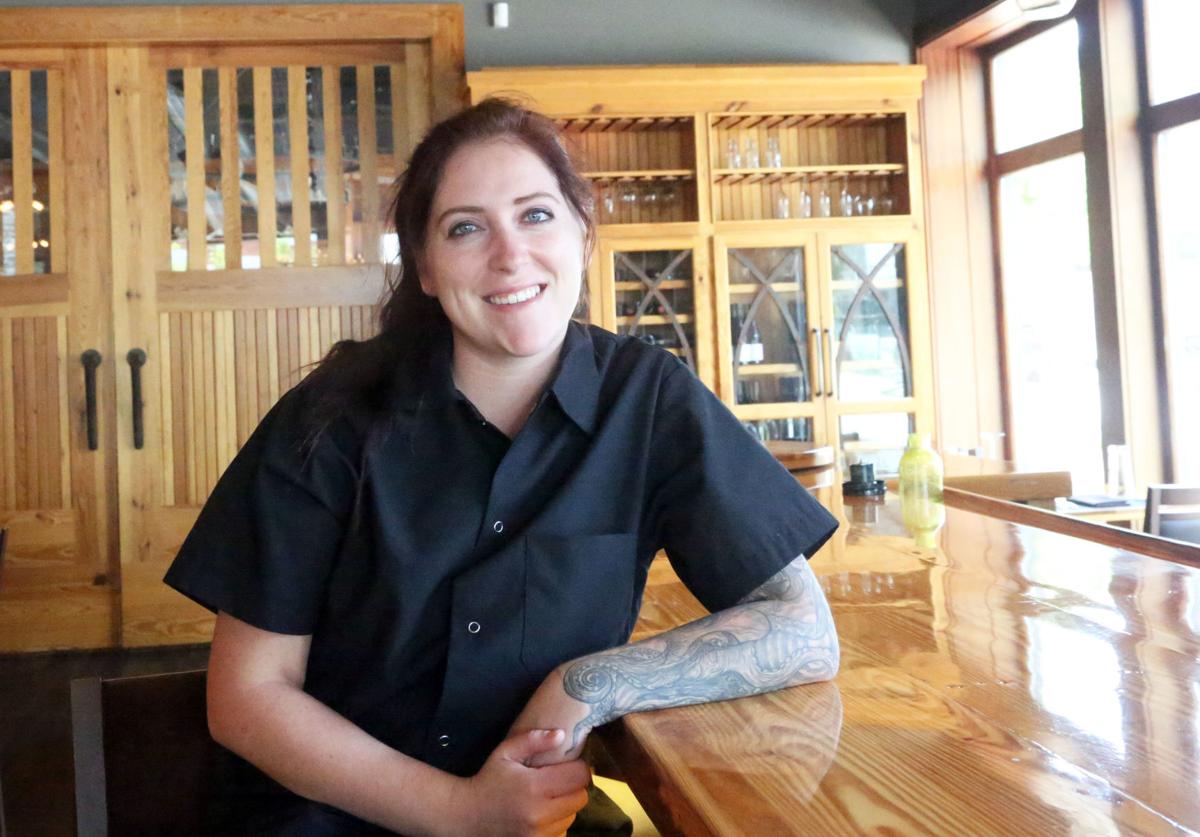 Kelly Vogelheim poses inside of Town Hall in downtown Florence. 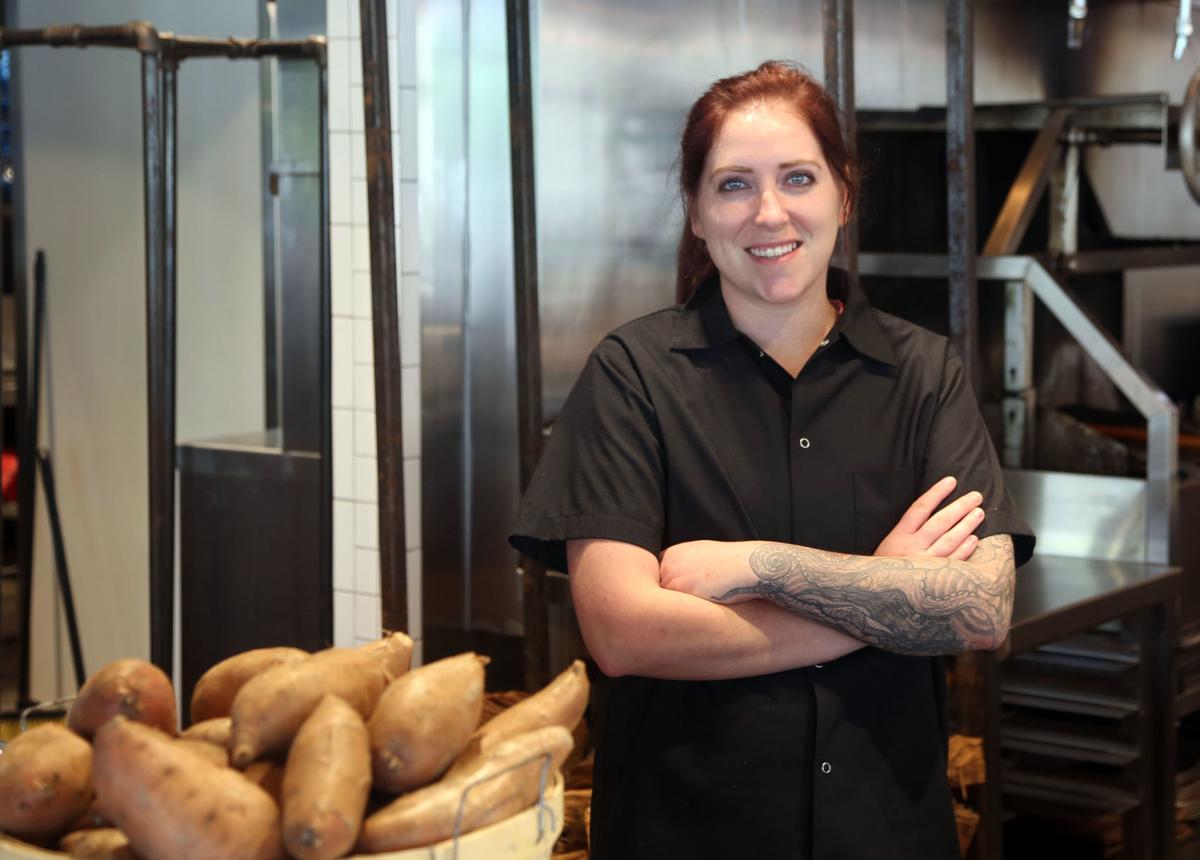 Kelly Vogelheim has had a passion for cooking for as long as she can remember.

FLORENCE, S.C. — Kelly Vogelheim has had a passion for cooking for as long as she can remember.

Vogelheim, a native of northern Michigan, was named the new executive chef at Town Hall roughly a month ago.

Vogelheim said she got her start in cooking with her mother and grandmother in the kitchen when she was a child.

“They were both excellent cooks,” Vogelheim said. “I always cooked with them when I was younger and helped them out in the kitchen. It was something we all could do together, and we shared recipes and such. It was just kind of a special thing, and I loved it so much, I decided to make a career out of it.”

Vogelheim graduated from the Great Lakes Culinary Institute at Northwestern Michigan College and began working as a chef for the Interlake Steam Ship Company. She said the company had a fleet of nine ships for which she would cook three meals a day.

“We also had passengers come on board to see what we did for the economy, and they would stay about five days,” Vogelheim said. “My job was to kind of impress them and make sure they had really nice food and a really nice experience, so that was fun.”

After working there for quite some time, Vogelheim said, she was ready to get back on land and looked to move down south. She moved to Charleston and worked at Low Country Bistro for approximately 1½ years before the position of executive chef came open at Town Hall in Florence.

“It’s been great,” Vogelheim said. “It’s a lot hotter down here than it is in Michigan, but I like it. It’s nice to move around, meet new people and see new things. Southern-influenced food is fantastic, and it’s been great to learn about it and master it.”

When asked about a special dish to try, Vogelheim said she couldn’t pick just one. She recommended the dry-aged ribeye, house-made sausage, scallops, pork belly and the new Prosciutto salad, which is a trial item on the menu.

“Everything’s good. You can’t go wrong with anything on the menu,” Vogelheim said. “We as a team put a lot of love and effort into it. It kind of allows everyone on this staff to put their personal touch into the menu.”

Outside of work, Vogelheim said, she enjoys spending time with her dog, Copper. She said she also likes to spend time outdoors and hopes to get back into hunting and fishing soon.

Vogelheim said the best part of cooking is getting to meet new people and personalizing her work.

“I love the people and the artistry behind it,” Vogelheim said. “You can learn so much from anyone. Everyone has different backgrounds, and when you come together, have ideas and create something that is eye-catching, beautiful and super tasty. That’s probably my favorite part.”

What you should ask if retirement is just around the corner

What you should ask if retirement is just around the corner

The most important things about building credit

The most important things about building credit

How to be a savvy shopper amid Cyber Monday hype

Besides recognizing FOMO, here are other ways to be a savvy shopper on Cyber Monday, which is the Monday after Thanksgiving. Also, check out more of the week's best money tips from experts.

Black Friday is rapidly morphing into “Hallothanksmas.” Still, some people like to shop on the day itself. Here are the details on store hours during Black Friday 2021.

Ladies on a Mission joins chamber

FLORENCE, S.C. – Ladies on a Mission joined the Greater Florence Chamber of Commerce and celebrated with a ribbon cutting on Wednesday morning…

NEW YORK (AP) — Stocks sank Friday, with the Dow Jones Industrial Average briefly falling more than 1,000 points, as a new coronavirus variant first detected in South Africa appeared to be spreading across the globe. Investors were uncertain whether the variant could potentially reverse months of progress at getting the COVID-19 pandemic under control.

LETTER TO THE EDITOR: Old Guy on a GREAT GUY!

In 1970-71 Mack Dixon was my P.E. teacher in Middle School at Gibbs Middle School in 8th grade. In high school he was assistant principal and bus supervisor.

Many people don’t have much choice about when they retire. Illness, job loss or caretaking responsibilities push them out of the labor force, ready or not. But some people have…

FLORENCE, S.C. – The Studio, A Salon, located at 1381 Celebration Blvd. in Florence, has rebranded and expanded to a new location.

On the road again: Travelers emerge in time for Thanksgiving

DALLAS (AP) — Determined to reclaim Thanksgiving traditions that were put on pause last year by the pandemic, millions of Americans will be loading up their cars or piling onto planes to gather again with friends and family.

BUDAPEST, Hungary (AP) — From appliance stores in the United States to food markets in Hungary and gas stations in Poland, rising consumer prices fueled by high energy costs and supply chain disruptions are putting a pinch on households and businesses worldwide.

Kelly Vogelheim poses inside of Town Hall in downtown Florence.

Kelly Vogelheim has had a passion for cooking for as long as she can remember.