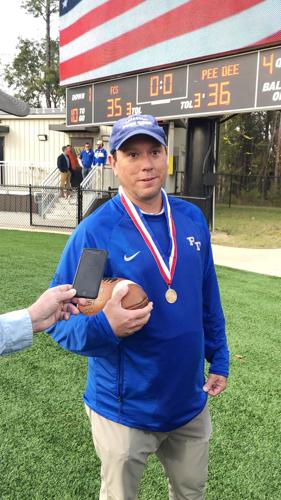 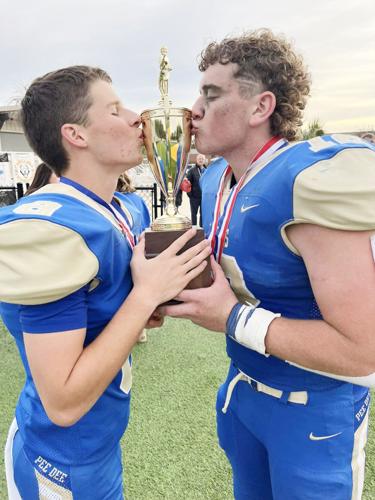 MARION, S.C. — For 27 years, Jonathan King has poured his heart into coaching Pee Dee Academy football. It took every ounce of that and more for the Golden Eagles to dispatch Florence Christian and win the SCISA 3A state championship Saturday.

Senior quarterback Hudson Spivey led the way, along with the solid running of Coleby Sinclair and a defense that made the timely plays in the 36-35 overtime victory.

The Golden Eagles took the ball first and did what it has done all season, driving methodically downfield. The seven-play drive was highlighted by a 35-yard pitch and catch to Colby Richardson. Spivey found Richard Smith open on fourth down to give the Golden Eagles the early 7-0 lead. Florence Christian replied in kind with a 12-play drive that culminated with a four-yard scoring run.

The tie lasted one play. Following the kick return to the 35, Spivey scrambled in the backfield before firing high in the middle. Sophomore Miles Trussell went up for the grab, shed a tackle and was gone for a 65 yard score to lead 14-7 in the first quarter.

The Eagles of Florence Christian responded again, converting a fourth down and 1, then running it in from three yards out on another fourth down to get within one after the failed PAT.

Florence Christian took the opening possession of the second half and took their first lead of the game to make it 19-14.

Florence Christian took the ball first in overtime and needed six plays to punch it in on fourth down from the one. The PAT was good, making it 35-28.

PDA took their turn and Spivey punched it in on fourth down to make it 35-34. Coach King called time and the players and coach decided to go for the win.

“We all got together and they decided they wanted to go for it right there,” King said after the game. “I have great coaches and these kids are always believing they can get it done.”

Spivey took the high snap and he walked into the end zone, touching off a wild celebration giving the Golden Eagles the 36-35 win and the 2022 State championship.

“He is smart and he is big,” King said of his quarterback. “He has been a great leader for years.”

Spivey was ready to make a play.

“We wanted to go for it,” Spivey said. “The line has been great all year. The backs and receivers are great. I just knew we were going to get it done. Give coach Minton and that team over their credit. They are very good and are very well coached.”

It is the school’s first 11 man state title, the first in football in 27 years and was completed by multiple players whose dads played on the championship teams of the 90s for coach Lon Spivey.

“Look at the crowd and the support we have and you can see the tradition,” King said.

Pee Dee finishes the season with a school record 12 wins.

MULLINS, S.C. – Head coach Kyle Drew and the Pee Dee Academy boys are 16-4 on the season and 5-1 in region play. The squad hosted Williamsburg…