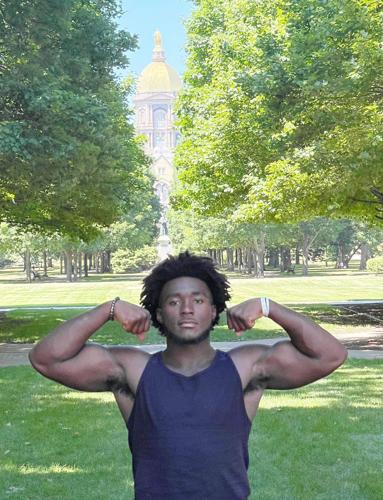 Marion Swamp Foxes junior running back and linebacker Rodrick McRae has been muscling his way through several camp visits including a stop at Notre Dame in preparation for the upcoming high school football season. 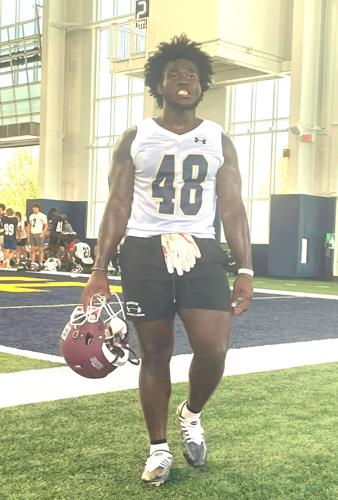 Marion’s Rodrick McRae gets some reps working out on the Notre Dame Fighting Irish campus during football camp in June. 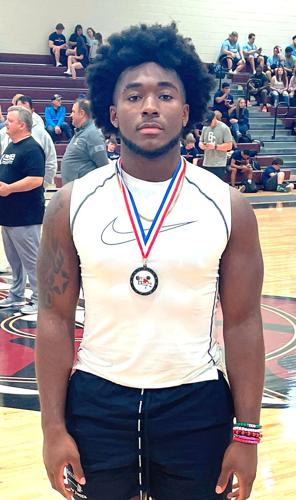 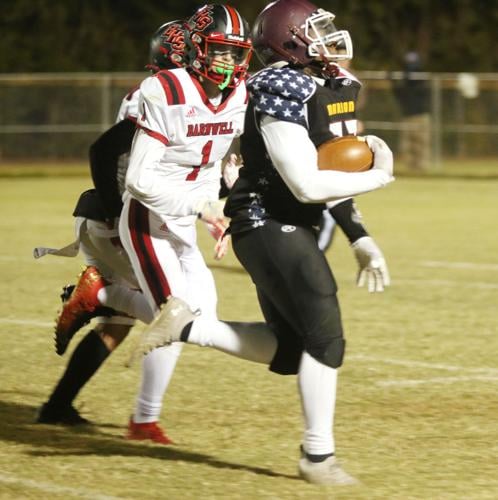 Marion’s Rodrick McRae (32) breaks for a touchdown run during Class 2A playoff action against Barnwell on November 5, 2021. 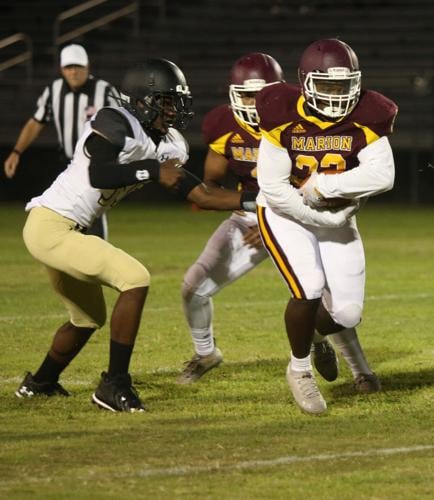 MARION, S.C. – Marion Swamp Foxes junior running back and linebacker Rodrick McRae is taking a strong approach to the game while training during the offseason. Besides adding bulk to his 215-pound frame, “Dino” McRae is putting up weight-plates and numbers ahead of the 2022 season.

McRae competed in the in the state weightlifting competition in March, placing second overall in his weight-class. He placed first in the state with a 360-pound bench press and second in the squat at 535 pounds.

“We also had to do the broad jump,” McRae said. “It felt good to be recognized with all the kids in the state.”

McRae said lifting weights has been part of his training regimen since middle school. The competition also helps with his explosiveness, shedding blocks and tackling, he said.

“I workout every day,” he said. “It’s really exciting getting ready for the season. I just workout and work on different football drills.”

“I learned a lot and got in shape a lot,” McRae said. “I’ve been working with him for two years and it feels like my body changed.”

McRae said he works hard to be the best he can be and let his efforts transition onto the field. He attended multiple camps during the summer including the VTO Sports Camp, Palmetto Combine Series and Football University Top Gun. He has also made campus visits for camp events at Notre Dame, Georgia State University, Georgia Southern University, University of South Carolina, Wake Forest University, Coastal Carolina University and North Carolina Central University.

Off the field, he is putting up more impressive numbers with a 4.9 GPA. His goals include playing college football and becoming a medical doctor.

“He understands that at his position he has to be physically strong,” Hennecy said. “He has to have enough strength and endurance to play on both sides of the ball.”

“He’s a pretty good player for us and hopefully will have another successful year,” he said.

Swamp Foxes assistant coach Travis Lewis said it was reassuring to have a player put in the extra work.

“I’m so proud of him,” Lewis said. “I push him as hard as he can get pushed physically and mentally. He has to learn how to handle adversity.”

McRae has been gaining the experience playing varsity football since eighth grade.

Hennecy said he is working on schemes as hard as he can and expects McRae to have a productive season.

HARTSVILLE, S.C. – There is a saying that lightning doesn’t strike twice in the same place. It would seem about as unlikely for someone to hav…

MARION, S.C. – Amazing Grace Park was the site of giving Saturday as the public was invited to take home free boxes of food provided by Harvest Hope Food Bank and take advantage of free healthcare screenings services through one of the largest health fair events in Marion County Saturday.

HARTSVILLE, S.C. – This is Richard A. “Dick” Puffer’s last week as executive director of The Byerly Foundation in Hartsville.

MULLINS, S.C. – Marion’s Saniyah Howard scored the match-winning ace in a 29-27 thriller in the third game of a sweep at rival Mullins last week

MARION, S.C. – Marion County was spared little damage as clean-up crews worked through Saturday morning in Mullins and Marion. Most power outages were restored within 24 hours.

Marion Swamp Foxes junior running back and linebacker Rodrick McRae has been muscling his way through several camp visits including a stop at Notre Dame in preparation for the upcoming high school football season.

Marion’s Rodrick McRae gets some reps working out on the Notre Dame Fighting Irish campus during football camp in June.

Marion’s Rodrick McRae (32) breaks for a touchdown run during Class 2A playoff action against Barnwell on November 5, 2021.