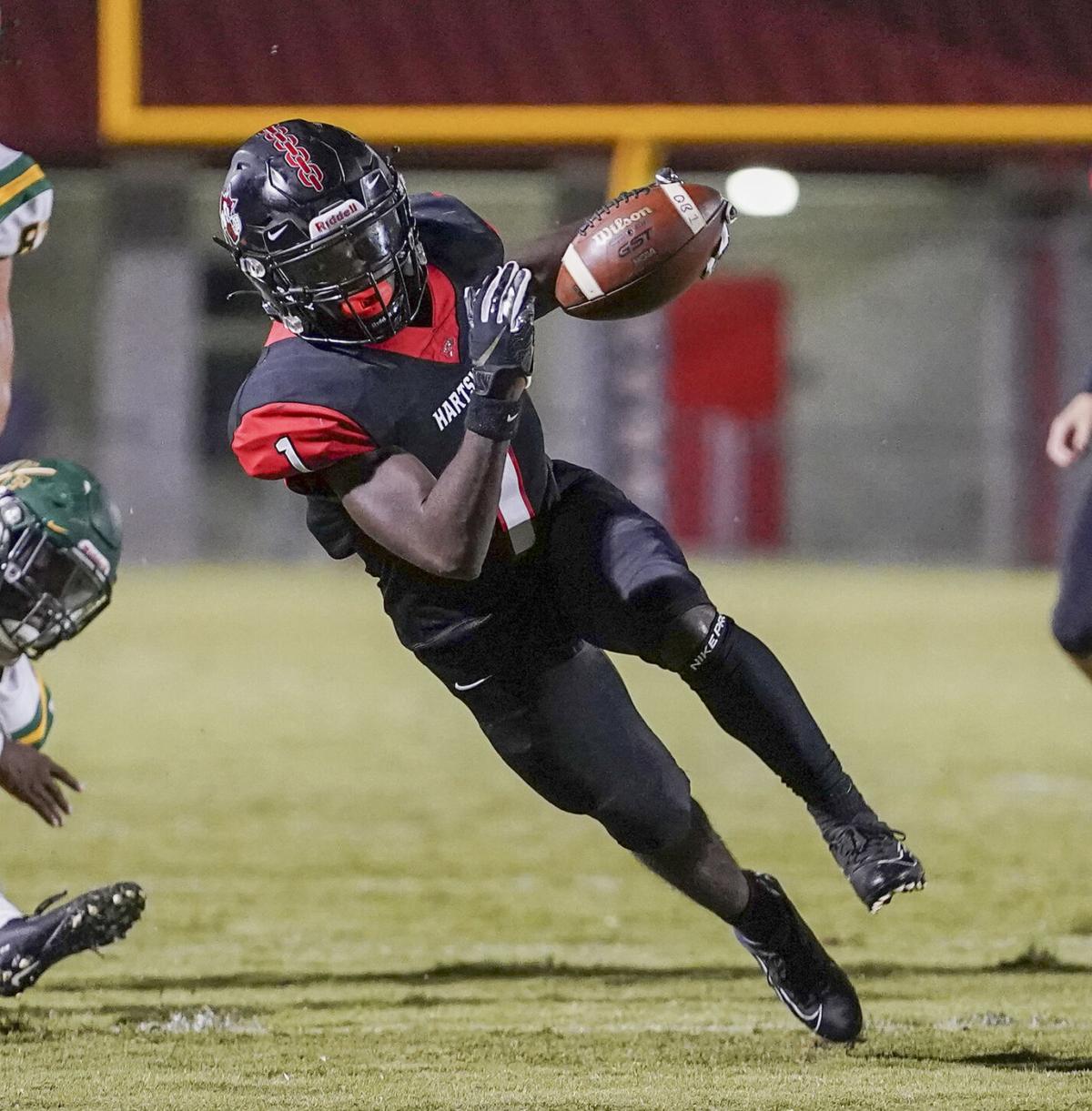 Hartsville’s Carmello McDaniel rushed for more than 200 yards and also scored a touchdown Fr4iday during the Red Foxes’ victory over West Florence. 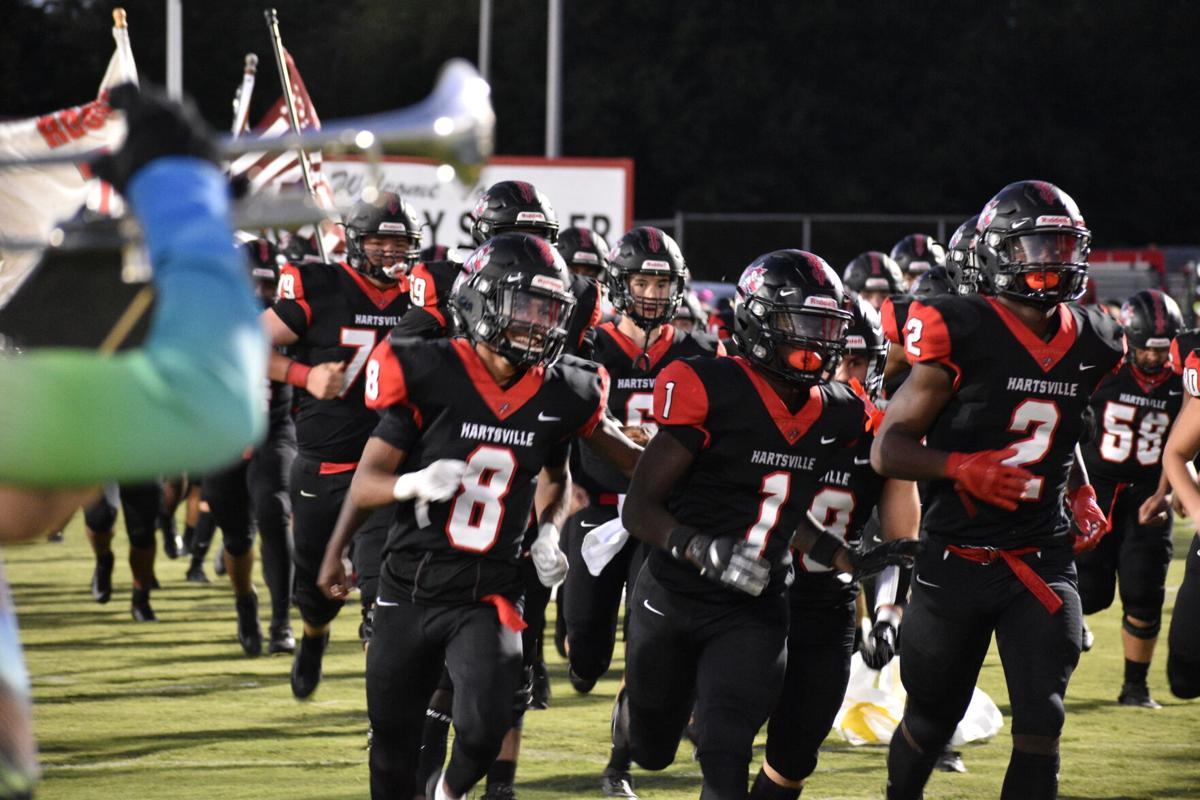 Hartsville races onto the field Friday before the start of a game against West Florence. 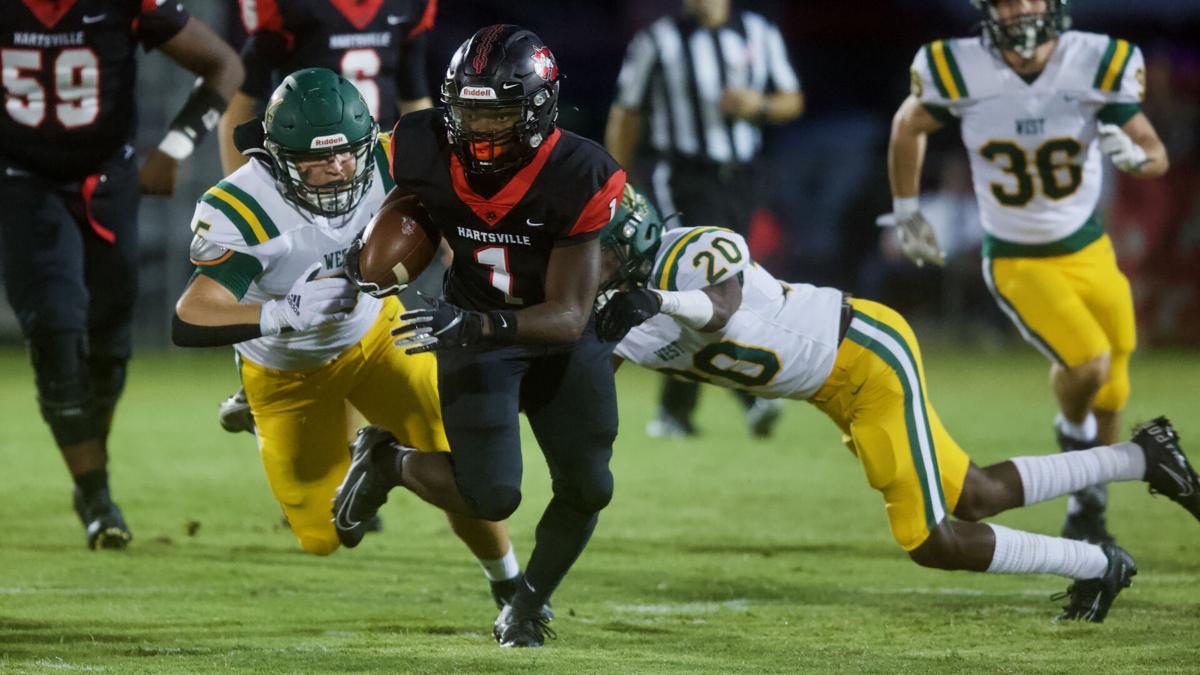 Hartsville's Carmello McDaniel (1) breaks through the West Florence defense during a victory Friday.

HARTSVILLE, S.C. − The moment was near, and there was little time to talk. But Hartsville running backs Carmello McDaniel and J’Shawn Anderson squeezed in a few words before the Red Foxes took the field Friday against West Florence.

“It’s like a bond we have,” Anderson said of the two, who are cousins. “(McDaniel) was like, ‘Come out here and play hard. We know what to do, just play our game.”

From there, the two Red Foxes did their talking on the field. McDaniel rushed for 201 yards and a touchdown, and Anderson rushed for 124 and a score of his own while the Red Foxes won 33-13 at Kellytown Stadium.

“It’s just that cousin chemistry,” said McDaniel, who scored on a 19-yard run in the second quarter. “It’s just deep in the blood. We went out there and did what we do and made our family happy. We just got it done.”

After the Red Foxes started the season 0-3, they are not only on a two-game winning streak, they are off to a 2-0 start in the most important part of their schedule – that of Region 6-4A.

“The kids have just been playing so hard; they’re laying it on the line. They’re practicing hard; they want to get better, and it shows,” Hartsville coach Jeff Calabrese said. “When you put so much into something, and you start to see results, I’m just so proud of them.”

Hartsville’s offense has been formidable all season, but the Red Foxes’ youth on defense had struggled to catch up – that was, until last week’s 42-20 win at North Myrtle Beach.

And on Friday, when West Florence brought star running back Terry McKithen, who had rushed for 654 yards and 13 touchdowns during the Knights’ first four games, that presented another test.

The Red Foxes responded by keeping McKithen out of the end zone and holding him to 92 yards.

“It’s about putting your kids in a position to be successful. (Defensive coaches Carlisle Koonts, Michael Ross Collins, Jason Earle and Tony Moore) do a great job as a defensive staff,” Calabrese said. “I think we found the right combination of what our kids are comfortable with, and they’ve been doing that the past couple of weeks.”

Meanwhile, Friday, Hartsville’s offense was gathering steam after a 68-yard touchdown by McKithen was called back. On the Red Foxes’ first possession, quarterback McKendrie Douglas scrambled before finding Roddi Morris for a 14-yard touchdown pass and 7-0 lead.

West Florence’s two touchdowns were scored in the second quarter: A 10-yard run by Steven Smalls, and a 20-yard pass from quarterback Deuce Hudson to Quantrell Pickens. The latter happened with 53.8 seconds left before halftime to move West within 14-13. The ensuing point-after kick, however, was blocked by Alex Hunt, and Hartsville had enough time to direct another scoring drive — in the nick of time.

Starting at its own 40, Hartsville got to the West Florence 38 with 6.7 seconds left. Douglas then aired a high, deep pass that Treion McFarland bobbled amid coverage before pulling it in while in the end zone as the first half expired. Douglas finished with 126 passing yards.

“(Douglas) is extremely calm,” Calabrese said of the sophomore. “He can get our offense in and out of a huddle, and he can execute very fast. A lot of that stuff is something people don’t see. But it takes a quarterback to take control of what you’re doing and managing the clock, and this young man is really special. We basically had one play, and gave Treion an opportunity to make a catch. And, McKendrie gave him a shot to do it, so it worked out tonight.”

All West coach Jody Jenerette could do was give Hartsville credit.

“Big play by them,” Jenerette said. “And that’s Kellytown. That’s going to happen in Kellytown if you aren’t ready to go. I thought we played it OK. Their kids just made a great throw and a great catch. That’s high school football. That’s what I told the guys at halftime: That’s the joy and the curse of high school football. Kids are going to make plays like that. It was just a huge momentum swing.”

Douglas scored from the 1, and Anderson from the 15 in the fourth quarter to put the Knights away.

It was the Knights’ first loss of the season, but Jenerette knows there is a lot of regular-season football to be played.

“We played poorly up front, poorer than we thought we could play,” Jenerette said. “But (Hartsville) had a great scheme and played their tails off, and they deserve every bit of the credit. As I told the guys, the way this region is, we’ll probably play them again in about a month or month and a half. So, let’s keep our heads up and keep fighting.”

Hartsville’s Carmello McDaniel rushed for more than 200 yards and also scored a touchdown Fr4iday during the Red Foxes’ victory over West Florence.

Hartsville races onto the field Friday before the start of a game against West Florence.

Hartsville's Carmello McDaniel (1) breaks through the West Florence defense during a victory Friday.