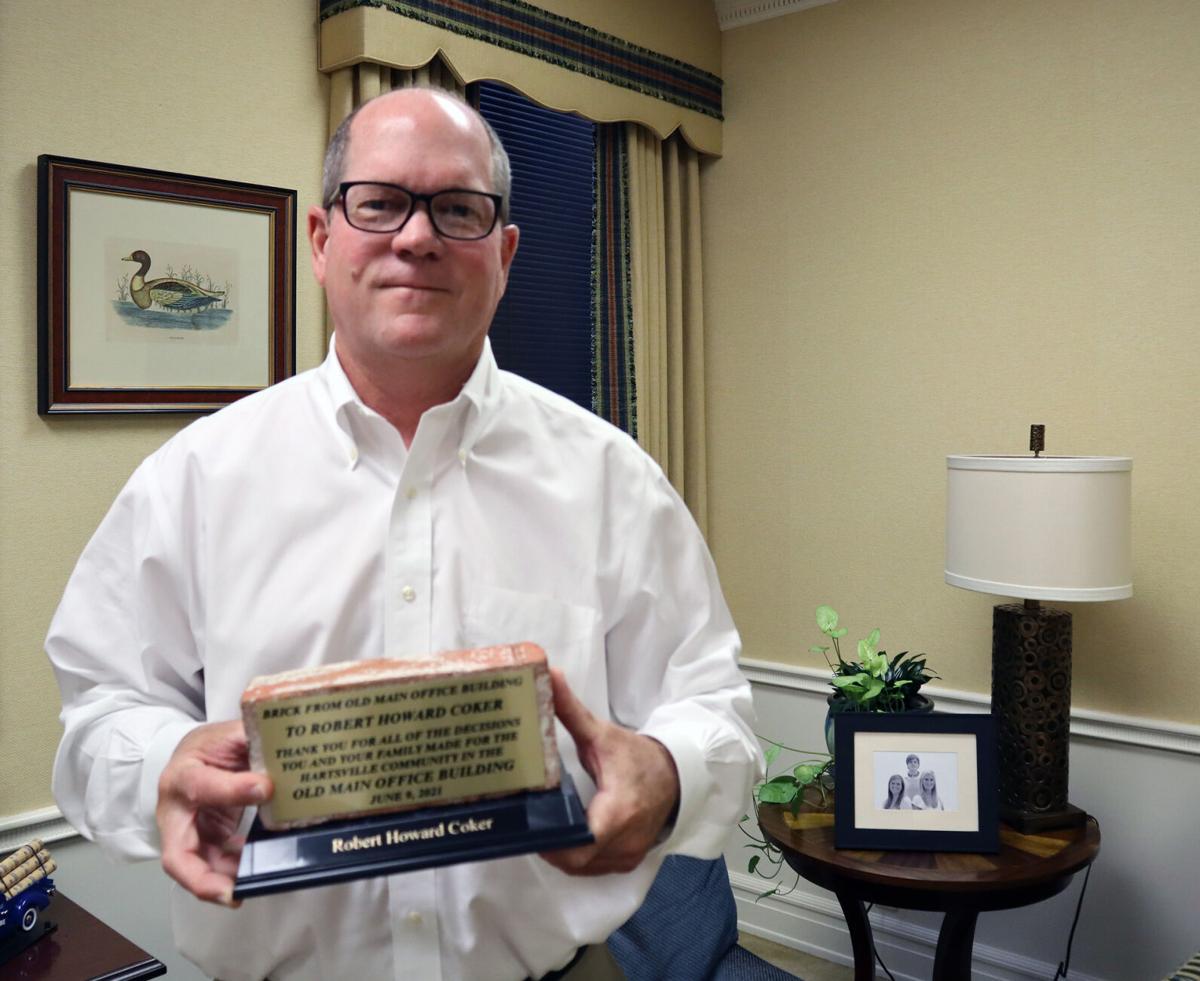 Howard Coker, the president and chief executive officer of Sonoco, holds a brick from the Old Main Office Building at Sonoco in Hartsville that was recently torn down to make way for Project Horizon. The plaque thanks him and the Coker family for all of the decisions made for Hartsville in that building. It was a gift from Drew Case. 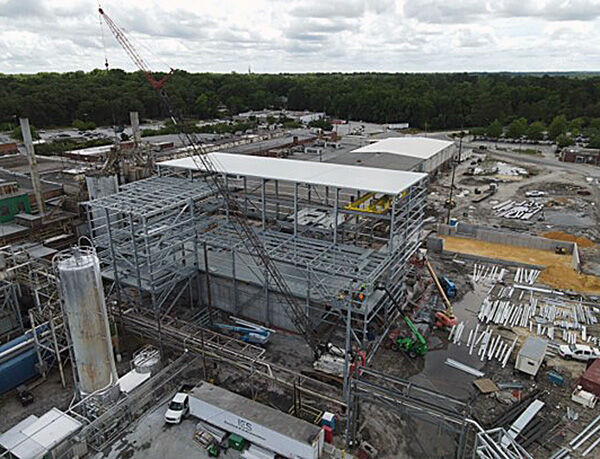 Sonoco has embarked on a $115 million Project Horizon, an investment to transform the corrugated medium machine into a state-of-art uncoated recycled paperboard URB operation with annual production of approximately 180,000 tons. 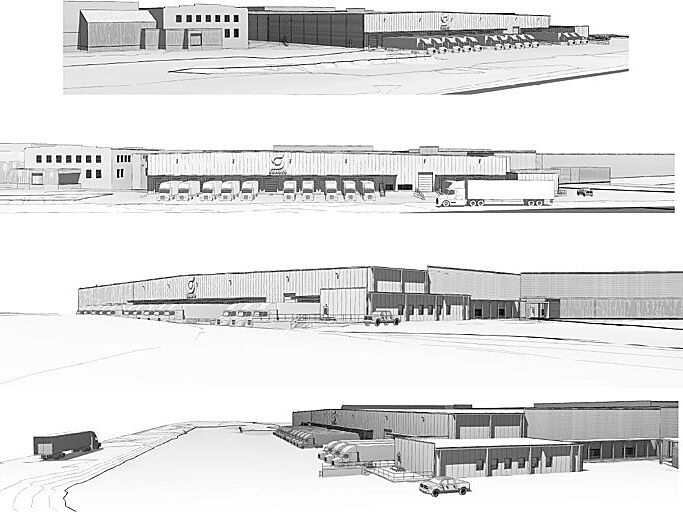 Sonoco is investing $115 million in Project Horizon. The project is expected to be operational by the end of second quarter of 2022.

HARTSVILLE – Howard Coker, the president and chief executive officer of Sonoco, has received the South Carolina Chamber of Commerce 2021 Business Leader of the Year Award.

The South Carolina Chamber’s Business Leader of the Year is chosen based on leadership in South Carolina and the embodiment of personal success. Other criteria include a business record based on ethical conduct and corporate responsibility, public service, contributions to the preservation of South Carolina’s government and commitment to creating a positive business climate to improve the state’s economy.

“Howard Coker, in his role as CEO of Sonoco, heads the largest publicly traded company headquartered in South Carolina,” said Bob Morgan, the president and chief executive officer of the South Carolina Chamber of Commerce, in a chamber release. “We are thrilled to recognize him as this year’s Business Leader of the Year.”

One reason cited for his recognition this year was the current expansion at Sonoco’s headquarters in Hartsville.

“We are investing $115 million in Project Horizon, an investment to transform our Hartsville, S.C., corrugated medium machine into a state-of-art uncoated recycled paperboard URB operation with annual production of approximately 180,000 tons,” Coker said. “This project is designed with the goal of being the lowest cost producer of URB in the world.”

The project is expected to be operational by the end of second quarter of 2022, Coker said.

“There are a number of significant construction projects currently underway that will modernize the infrastructure of the entire Hartsville mill complex and allow for the efficient and safe handling of raw materials and finished goods,” Coker said.

Sonoco is committed to creating sustainable products, services and programs their customers, employees and communities that support their corporate purpose of Better Packaging. Better Life.

“If we create better packaging, we create a better life for our staff, suppliers, community and stakeholders,” Coker said.

He said businesses are built and grow by doing the right thing,

He said his decisions for the company are based on “Is it the right, ethical thing to do?”

Sometimes the best thing to do is not necessarily the best economically but ethically, he said.

When the company announced its latest expansion project, Coker said some people questioned why in the middle of COVID they would start a multimillion dollar project to modernize the entire Hartsville complex.

“This is one of our largest complexes and where the company was founded,” Coker said.

He said the company made a commitment to make it new and better.

He said Hartsville is his hometown and that decision was an easy one for him.

Coker said during the pandemic, people were staying home to eat; the demand for their packaging products skyrocketed. The company saw an unprecedented demand.

Sonoco is a global provider of consumer, industrial, health care and protective packaging.

Everyone knows what happened with toilet paper during COVID.

“The demand was great,” he said.

“We had to hunker down and prepare,” he said.

At the same time, Coker said their industrial side was reaching record lows. Between the two, he said they ended up in a good place.

He said the time was right to expand and update the Hartsville facility.

The first question is always what is right for the shareholders, he said.

“It was the right decision,” Coker said.

The old headquarters building, which was built in the 1940s, came down. Coker said it was not easy to see that happen because of the building’s historical significance to the town and to Sonoco, but it was from the standpoint of moving the company into the future.

He said one of Sonoco’s former employees, Drew Case, presented him with a brick from the old building with an inscription on it. That is something he plans to do for others on special occasions.

While he has 36 years of experience with Sonoco, Coker has only been in the CEO role since February 2020.

“The next month COVID hit,” he said.

Coker said COVID provided a great opportunity to unify their teams around the globe.

Everyone vowed to get ahead of this thing, he said. He said they did a tremendous job making sure everyone was safe – from employees to suppliers to customers.

“I wouldn’t say we are back to normal,” he said.

But he said things are going in the right direction.

Sonoco, like many other companies, is experiencing a shortage of available workers. He said they are about 10% shy of the number of workers across the country.

Coker said the stimulus package provided by the federal government has enabled people to stay at home longer and motivated some people to bow out of the workforce, which has contributed to the worker shortage.

“We are competing with everyone else for the same workers,” he said.

He said employees are working longer hours to make up for the shortage of workers.

“We are very fortunate to be in Hartsville where we have a strong workforce,” he said.

Coker gives credit to all of Sonoco’s employees for the Chamber’s Business Leader of the Year award.

Coker said not being able to travel, to see everyone, during COVID was very frustrating.

He said he worked his way up, starting in high school in the mill, to supervisor, plant manager and other leadership roles. He likes to stay in contact with employees – face-to-face when possible.

He has traveled the globe working in and visiting Sonoco plants and has a deep understanding of this business.

Coker describes his style of leadership as approachable. He likes to involve others in decision-making processes, getting opinions of others before making the final decision.

Sonoco has been recognized over the past several years as one of Barron’s 100 Most Sustainable Companies, by Newsweek as one of America’s Most Responsible Companies and as one of Fortune’s World’s Most Admired Companies.

“I am extremely humble by this award. I never imagined I’d be getting this recognition,” Coker said. “I can’t say enough about our team. I am happy to accept this award on behalf of Sonoco.”

He said there is a long list of amazing and highly successful people deserving of this award.

Coker and his wife, Rhonda, have three grown children. He currently serves on the board of directors of Wofford College, the American Forest & Paper Association and on the board of trustees for the Manufacturers Alliance for Productivity and Innovation (MAPI). He resides in Hartsville.

Coker will be honored at the 42nd South Carolina Chamber of Commerce Annual Summit at The Sanctuary at Kiawah on Nov. 1-3.

HARTSVILLE – Acai Express has joined the Greater Hartsville Chamber of Commerce and celebrated last week with a ribbon-cutting ceremony.

The Byerly Foundation donated $900,000 in grants this fiscal year

HARTSVILLE – The Byerly Foundation, a private foundation in Hartsville with a mission of helping many organizations in the community help make…

HARTSVILLE, S.C. – A long line circled the new Dunkin’ in Hartsville on Fourth Street on Sept. 8 morning in anticipation of the opening. The f…

DARLINGTON, S.C. – The Darlington County road maintenance fee may soon be no more.

HARTSVILLE, S.C. – The smell of fresh paint greeted guests Sunday as they entered the Gymatorium at the Butler Community Center.

HARTSVILLE – The Butler Heritage Foundation will host a public open house to celebrate the renovations to the Gymatorium.

Howard Coker, the president and chief executive officer of Sonoco, holds a brick from the Old Main Office Building at Sonoco in Hartsville that was recently torn down to make way for Project Horizon. The plaque thanks him and the Coker family for all of the decisions made for Hartsville in that building. It was a gift from Drew Case.

Sonoco has embarked on a $115 million Project Horizon, an investment to transform the corrugated medium machine into a state-of-art uncoated recycled paperboard URB operation with annual production of approximately 180,000 tons.

Sonoco is investing $115 million in Project Horizon. The project is expected to be operational by the end of second quarter of 2022.