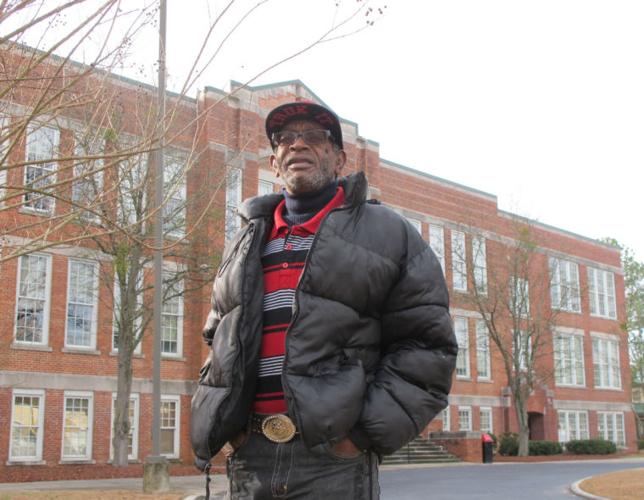 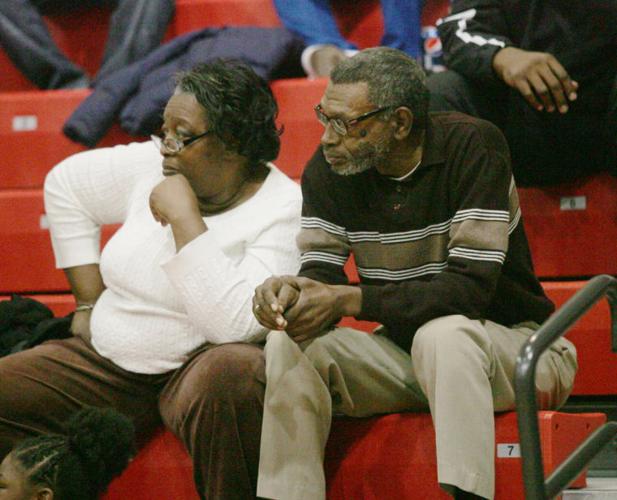 BOB SLOAN/HARTSVILLE MESSENGER Nathaniel Rogers, right, watches the state champion Hartsville Red Foxes basketball team play from the stands at the school's new $4 million arena. Its a far cry from the "crackerbox" gym the school used when he played for the Red Foxes during his junior and senior years.

Part one of a four-part series:

HARTSVILLE _ As 67-year old Nathaniel Rogers sat in the stands of Hartsville High School’s $4 million arena in mid-December, one can only wonder what thoughts ran through his mind.

Leaning forward, elbows planted on his knees and hands cupped around his bearded chin, Rogers appeared transfixed by the Red Foxes’ defending AAA state champion boys’ basketball team as it played visiting Marion. With its high-scoring, fast-paced offense, Hartsville’s team cruised to another win in impressive fashion. What may have interested Rogers more than the final score that night was the fact that of the 17 players wearing Red Fox uniforms that night, 15 were African-American.

It was Rogers’ first trip back to his alma mater in more than 40 years. Things had certainly changed since the last time he saw the high school’s team step onto the basketball court.

In 1964, six years before Darlington County schools were officially integrated, Rogers became the first African-American to attend Hartsville High School. During his junior and senior years, he was the first black man to wear a Red Fox basketball uniform.

Now an electrical engineer with a degree from S.C. State University, Rogers recently returned to Hartsville after nearly four decades. The primary reason for his return is to help his aging parents, Napoleon and Fannie Rogers. Napoleon, 84, is the owner and operator of Roger’s Barber Shop on South Sixth Street. Fannie, also 84, is a retired seamstress.

As one might expect, many of the memories Rogers has of his high school days in Hartsville are not pleasant. Some are downright mean. Still, Rogers said he can recall some good times as well.

In fact, when asked if he had a chance to do it all over again, his answer was short, quick and most emphatic.

By his own admission, Rogers was not among the best of students at Butler High School. His grades, he said, were “adequate.” His mother confirmed her son’s memory, saying he “had to work extra hard at his studies.” While about average when it came to schoolwork, put a set of drumsticks in his hands and Rogers would move to the head of the class. From the sixth grade through the ninth, he played drums in the senior band at Butler. The rhythm of playing percussions came easily to Rogers, far easier it seems than opening a textbook.

Outside of school, Rogers had his share of fun. He would hang out with the other kids and sometimes they would cause mischief or get in trouble, but nothing really serious.

“I really wasn’t that different than any of the other kids,” he said. “I got in my share of trouble, but really no more than you might expect.”

Even at the age of 15, Rogers said he was very much aware of the stranglehold segregation had on society.

“It was two very different worlds,” Rogers recalls. “Everything was still separate. We still had to go through the back door at the Center Theater and through the side door on white businesses on Carolina Avenue.”

Early In the summer of 1964, Rogers made spending money working as curb boy at Baron’s Drive Inn on Fifth Street. He can remember bringing food to car windows and meeting some of the white students his age who attended Hartsville High School. Little did he know at the time they would soon be his classmates.

“Baron’s and Ruth’s Drive Inn were the two hangouts for high school kids back then,” said Rogers.

Some time in late June or early July, Rogers said a group of visitors from local chapter of the NAACP stopped by his home to talk with him and his parents about the possibility of transferring to Hartsville High School. He’s pretty sure there were representatives from the regional office of the NAACP with them as well.

“They were canvassing the area to see who all might be interested in transferring to from Butler Hartsville High,” Rogers said. “As I recall, they talked to a number of families in the area. We listened to what they had to say and that was it. We didn’t have to make a decision right then, but we told them we would talk it over and get back to them.”

Surprisingly, Rogers said he was not completely opposed to the idea of being the only African-American at an all-white high school. He said he was torn at first, seeing it as a good opportunity while at the same time weighing it against the connection he had with his friends and his activities at Butler High School.

He also admits the thought of transferring did scare him.

“I knew it would be like being separated completely from the world I knew and placed in an environment that I knew nothing about,” Rogers said. “I had worked so hard over the last few years on grades and raising money for new band uniforms, it was hard to just walk away from that.”

He said he and his parents discussed the idea at great length.

“I wasn’t pressured or pushed or anything like that,” he said. “They urged me to think about it very seriously. They talked to me about the benefits it could have and what it could mean in terms of my education. I thought about it and it seemed like a good opportunity. I would be exposed to things that I would not be exposed to attending Butler. In the end, I just really figured, why not?”

In the end, Rogers and his parents decided to make the move from Butler to Hartsville.

Asked why he though he might have been chosen by NAACP officials to become the first African-American to attend Hartsville High, Rogers said he is not sure. Could it have been because they saw something in his character? Did they see him as someone who could withstand the name-calling and bullying?

“I can’t say,” Rogers reiterated. “That was a dialogue that was really between them and my parents.”

“I met with them a couple of times,” Fannie said. “I did not go along with some things they said and neither did Napoleon. I figured Nathaniel was our child and we were responsible for him. At that time he was at an age that he could decide with us whether he wanted to go, and he decided to go.”

In early August, Rogers packed his bags and headed north to stay with family members in New York City. It was his first trip to the Big Apple and it coincided with the holding of the World’s Fair at Central Park, Flushing Meadows, Shea Stadium and other venues. The theme of the fair was "Peace Through Understanding,”

Rogers remembers the excitement he felt being around the huge crowds of people in the big city.

“Never seen anything like that,” he recalls. “I was just an old country boy. It was my first time in New York City and I was awestruck to say the least.”

In mid-August, Rogers got a call from his dad saying he needed to come home to register for school. He quickly packed his bags and made the trip home.

At home, Rogers and his father registered for class in the office of Darlington County School Superintendent Dr. T.H. Ulmer. He would be taking college prep courses with an emphasis on the sciences. Once his classes were in order, the superintendent then spoke with them about what likely would await him when he arrived at school.

“It was about what you might expect,” said Rogers. “They said I should be prepared to be harassed and to expect name calling. They said there were some things I would just have to accept and go on about my business. That was pretty much it. No special training or preparation, but then again, I didn’t really expect any.”

BOB SLOAN/HARTSVILLE MESSENGER Nathaniel Rogers, right, watches the state champion Hartsville Red Foxes basketball team play from the stands at the school's new $4 million arena. Its a far cry from the "crackerbox" gym the school used when he played for the Red Foxes during his junior and senior years.