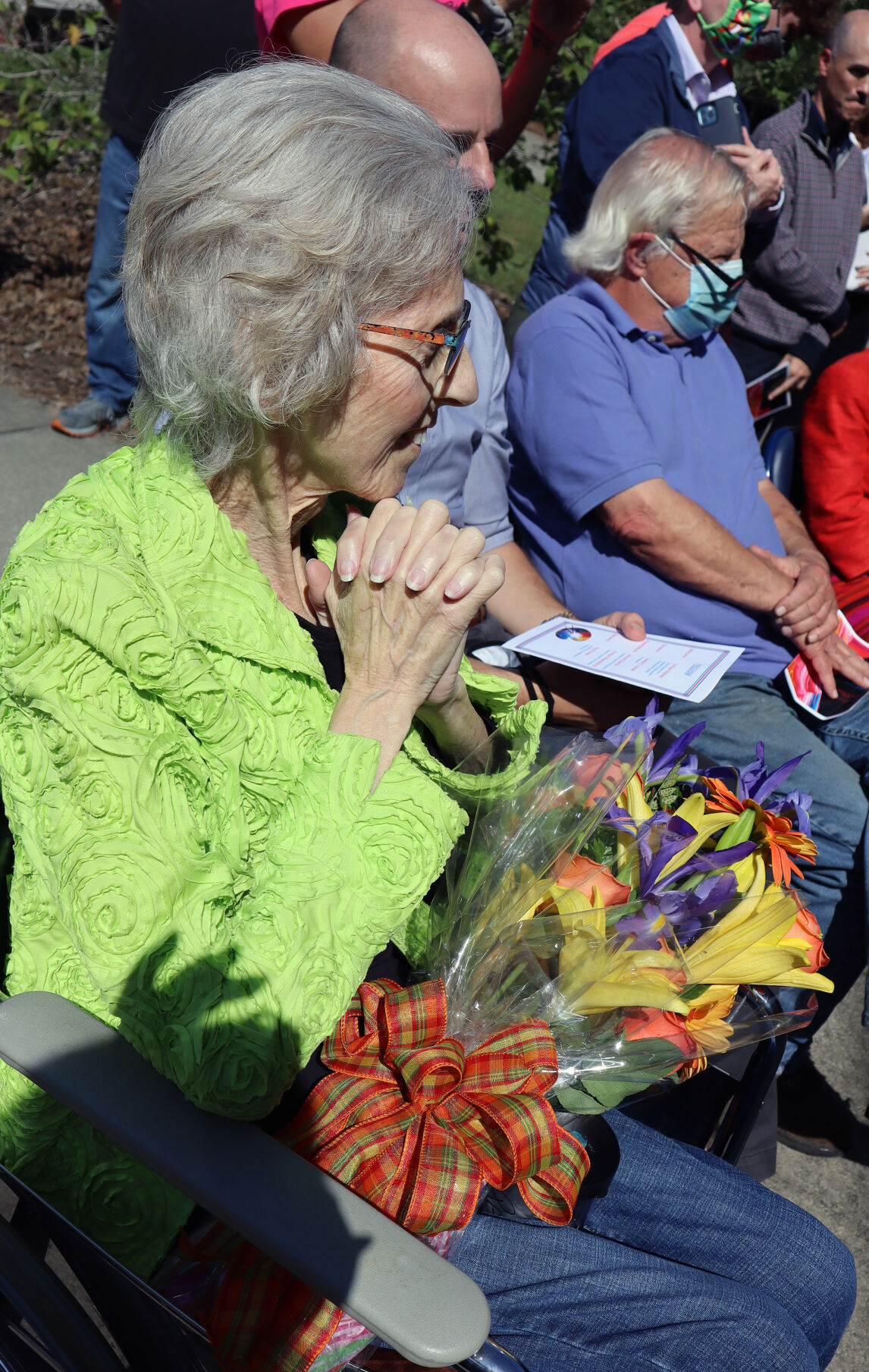 Patz Fowle was praised for her artistic contributions to the South Carolina Governor’s School for Science and Mathematics on Oct. 13 during the dedication of the their arts studio as the Patz Fowle Visual Arts Studio. 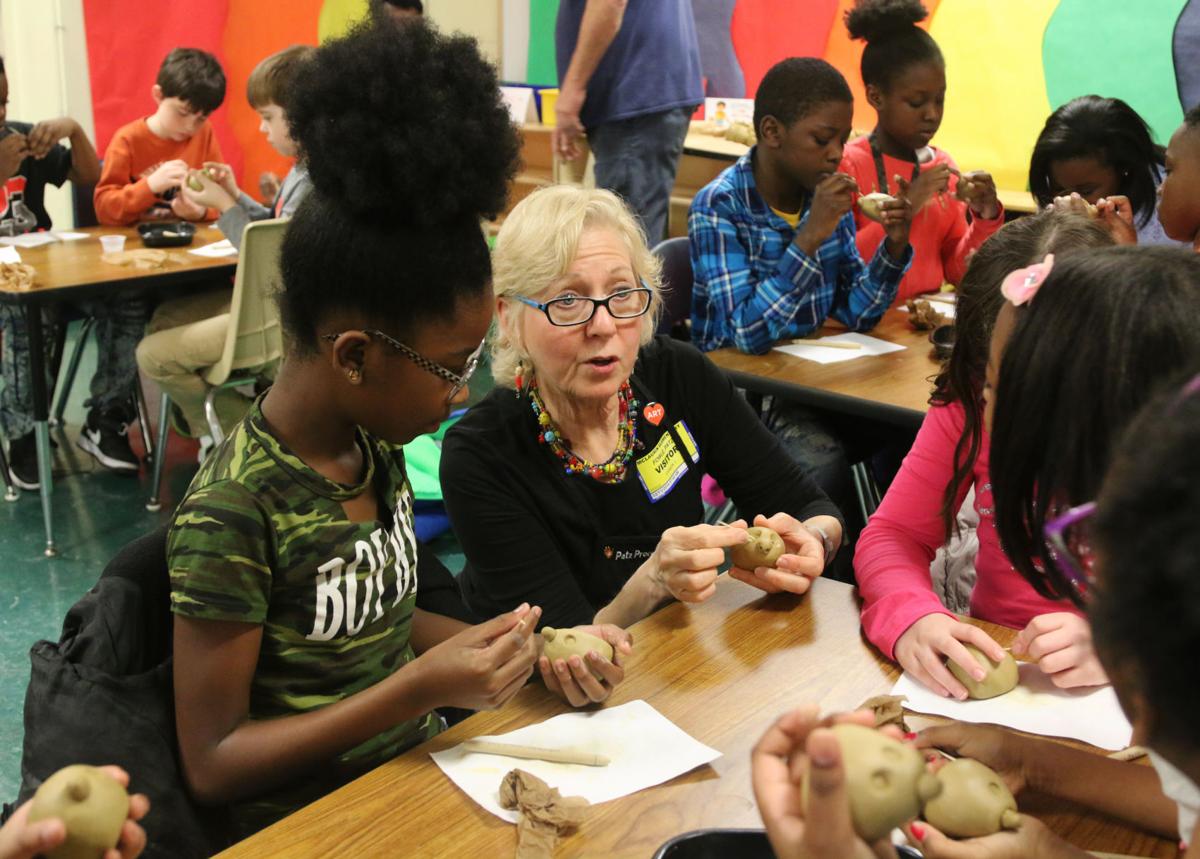 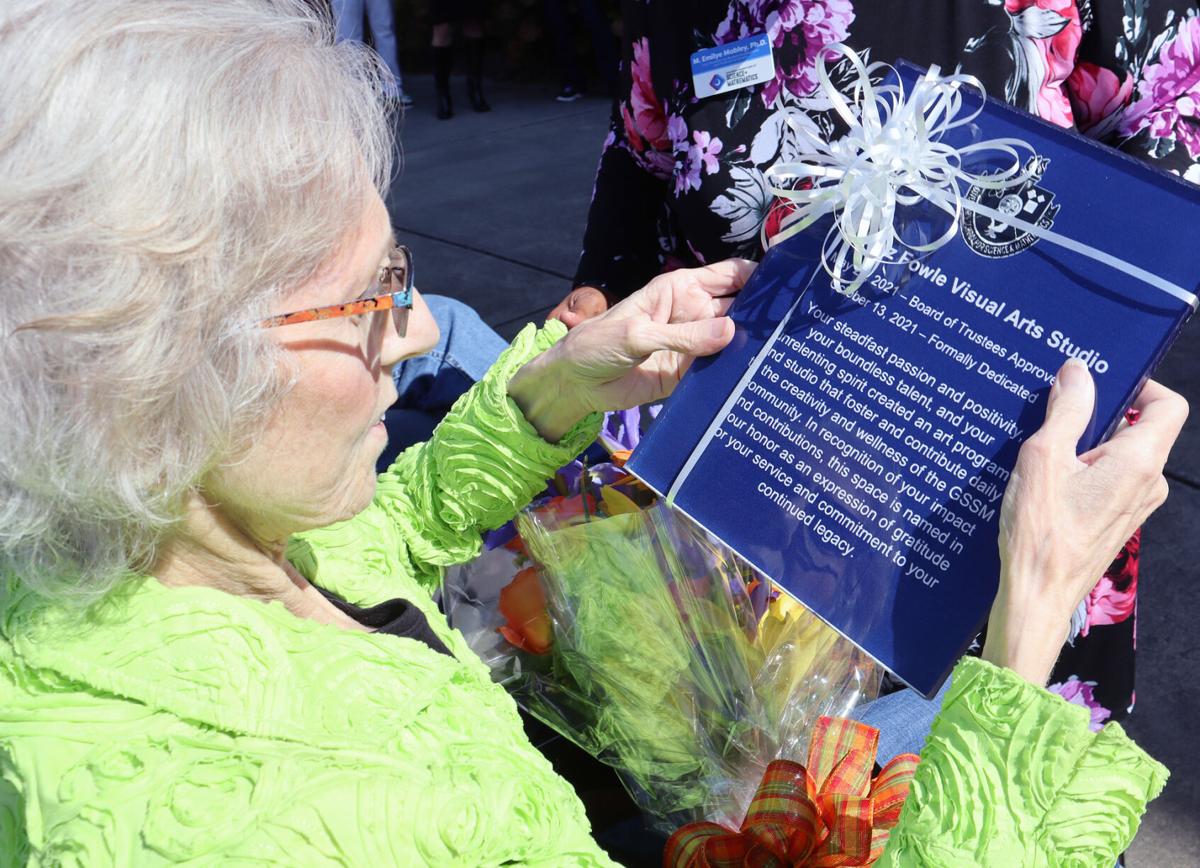 Patz Fowle was presented a plaque during the dedication ceremony of the SC Governor’s School for Science and Mathematics’ arts studio as the Patz Fowle Visual Arts Studio. The words are also placed at the studio wall.

HARTSVILLE – In a final act to honor the creativity and service to the arts and the school by Patricia A. “Patz” Fowle, the South Carolina Governor’s School for Science and Mathematics held a formal dedication ceremony on Oct. 13 to rename its arts studio the Patz Fowle Visual Arts Studio. She celebrated with family, friends, colleagues and students at GSSM.

The next day, Hartsville mourned the loss of one of its most creative resident artists.

Fowle brought humor, intrigue, creativity, a quirkiness and an enormous amount of talent to each piece of artwork she created, especially the animals that she created out of clay.

The plaque she received read:

“Your steadfast passion and positivity, your boundless talent and unrelenting spirit created an art program and studio that foster and contribute daily to the creativity and wellness of the GSSM community. In recognition of your impact and contributions, this space is named in your honor as an expression gratitude for your service and commitment to your continued legacy.”

Fowle has shared her artistic talent and knowledge with the students at GSSM since 1999 when she first taught Art in the Interim, eventually becoming the visual arts coordinator and art instructor.

In 2013, she joined the Student Development Division as the Governor’s School’s visual arts coordinator.

She and her husband, Mike Fowle, designed an innovative “Open Art Studio” out of an empty former foreign languages lab accessible to all students attending the school.

On May 22, GSSM and its board officially approved the naming of the on-campus art studio in her honor.

An award-winning, professional artist, Fowle worked in a variety of media from ceramics to large-scale, public art sculptures. She developed her own original method for hand-building clay known as the Patz Process Ceramic Technique, which is recognized by the American Ceramic Society and taught to educators and students, nationally and internationally.

Her sculptural work in this medium is part of a permanent collection in the American Museum of Ceramic Art.

GSSM President Daniel S. Dorsel, in speaking about Fowle at the dedication, read from her teaching statement: “My passion as an art instructor and advocate is to nurture appreciation for visual arts and to guide students to develop their full creative potential. I strongly believe that a life enhanced by the arts is a life well-lived. It is with great pleasure that I share artistic knowledge, traditional practices and innovative processes with students at the South Carolina Governor’s School for Science and Mathematics.”

Dorsel also shared some of the student feedback after taking a course under Fowle.

“I really love the free-flowing-ness of the class,” wrote one student about her class. “Everyone can work at their own pace, where they feel comfortable, and I love that! I’m never scared to ask you about anything, and I really love your vibes!’’

“This course truly helped me to re-center and be at peace with who I am by allowing me to express myself creatively,” wrote another student.

“Mrs. Patz brings light to my day,” wrote a student after taking her class. “She radiates a positive attitude that is hard to reject even after a long day of other school work. She’s definitely one of a kind.”

“Because of Fowle’s commitment to wellness and student expression, the space she created continues to contribute to the overall well-being of the school community,” stated a release. “She partnered regularly with colleagues across disciplines to provide interdisciplinary opportunities. Through her passion and leadership, GSSM students are recognized throughout the state not only for their academic and athletic achievements, but also their art accolades.”

During the 2018-2019 academic year, GSSM made the decision to make visual arts and music courses a part of the regular academic curriculum. Fowle taught four art courses through the humanities department, while maintaining the non-academic art offerings, setting up exhibits featuring student artwork and managing the studio.

“Her efforts have shown the public that the GSSM student is not one dimensional, but multi-talented and multi-faceted,” the release stated. “This has broadened the public’s perspective of the school for prospective students and their families. Our art program’s accomplishments can also be celebrated in the promotion of the school to all constituencies.”

In 2018, she and her husband and creative partner created “Onward and Upward” for the Dr. Ronald E. McNair Life History Center in Lake City. They collaborated on many other works in the Lake City ArtFields competition and were the 2015 People’s Choice 3D Award winners.

She was an artist in residence, a guest artist and lecturer and instructor.

Her artwork has been displayed in solo exhibitions, locally and throughout the United States.

Fowle was born in Ringgold, Georgia.

Fowle was encouraged as a young student by her teachers to explore her creative abilities. In high school she realized a “genuine passion for working with clay.”

As a young adult, she began her career working in the field of graphic arts.

In the summer of 2008 and 2009, she studied at the Teacher Institute in Contemporary Art at the School of the Art Institute of Chicago, and also at The Kansas City Art Institute/Educators Art lab summer program in Kansas City, Missouri. Her focus of study was metal sculpture and fabrication (focus: oil painting). She also studied under master potter Yosuke Haruta.

Patz is survived by her husband, Michael Ray Fowle of Hartsville, and daughter, Michelle Rae Morris of Hartsville.

Patz Fowle was praised for her artistic contributions to the South Carolina Governor’s School for Science and Mathematics on Oct. 13 during the dedication of the their arts studio as the Patz Fowle Visual Arts Studio.

Patz Fowle was presented a plaque during the dedication ceremony of the SC Governor’s School for Science and Mathematics’ arts studio as the Patz Fowle Visual Arts Studio. The words are also placed at the studio wall.