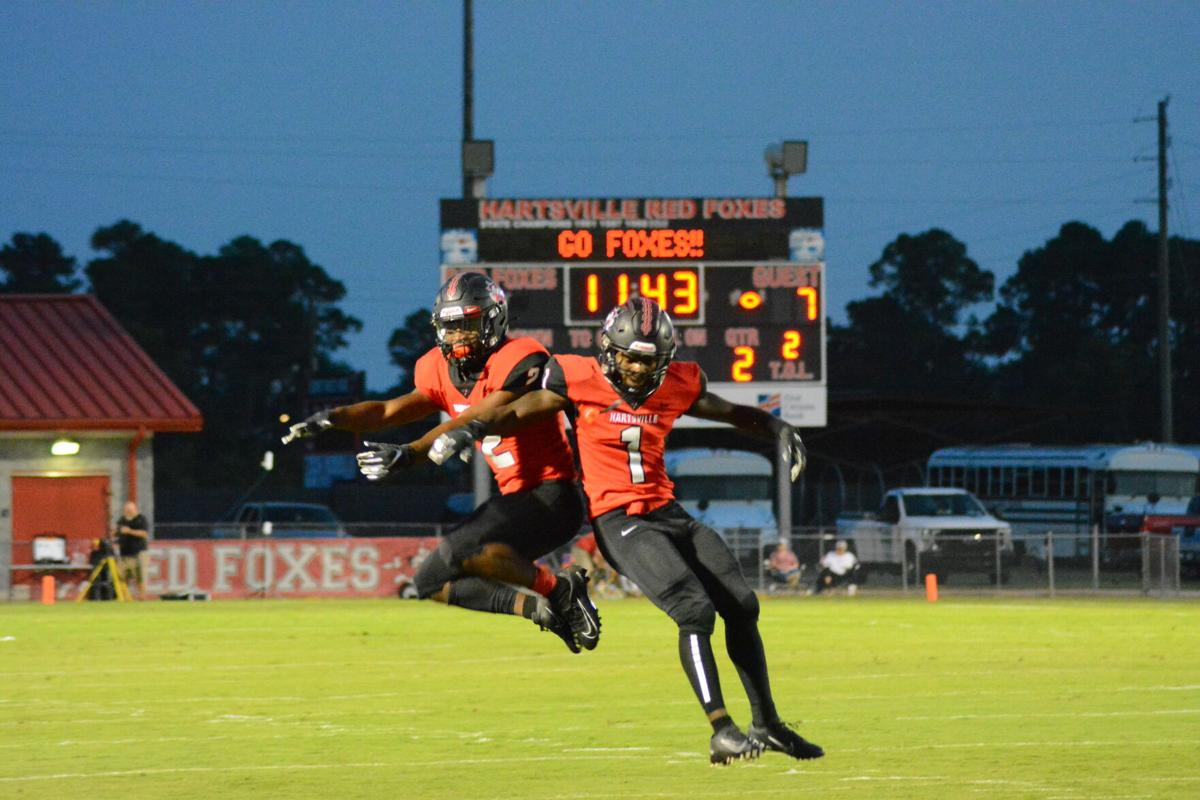 Hartsville running back J’Shawn Anderson (2) and Carmello McDaniel (1) celebrate a touchdown Friday during a 43-37 loss to Camden. 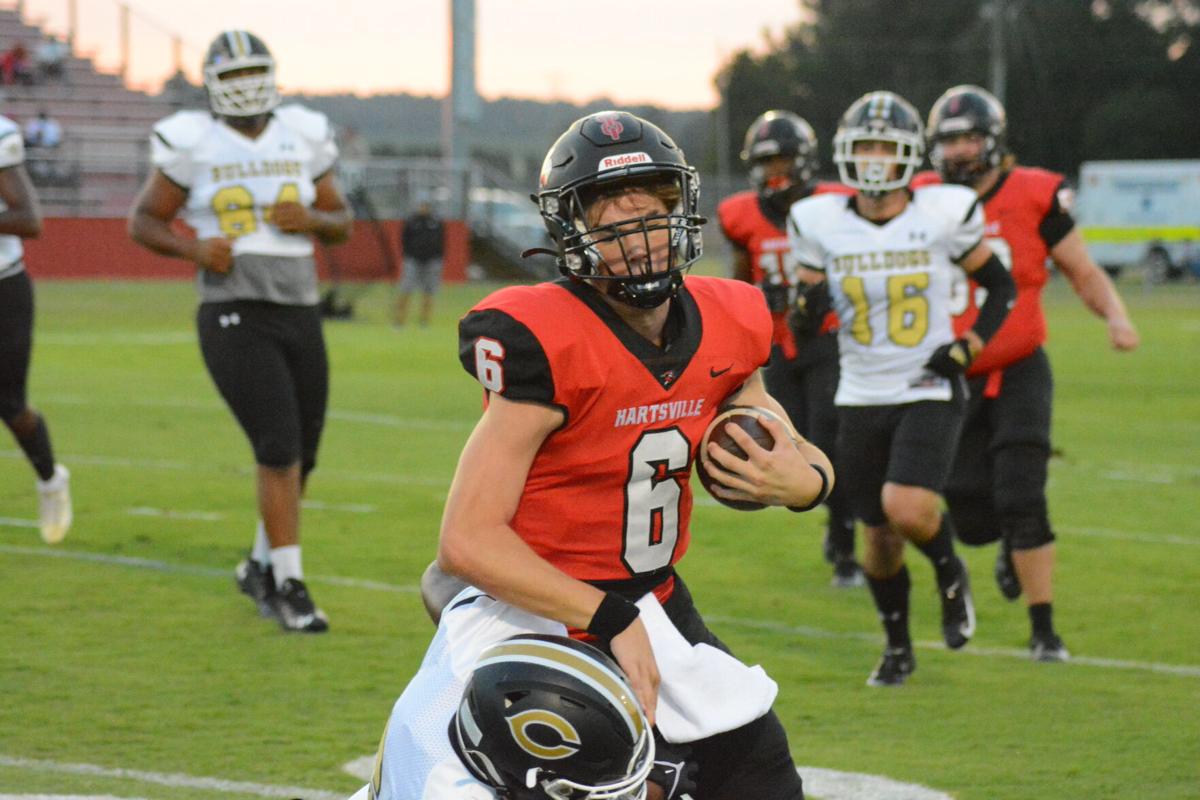 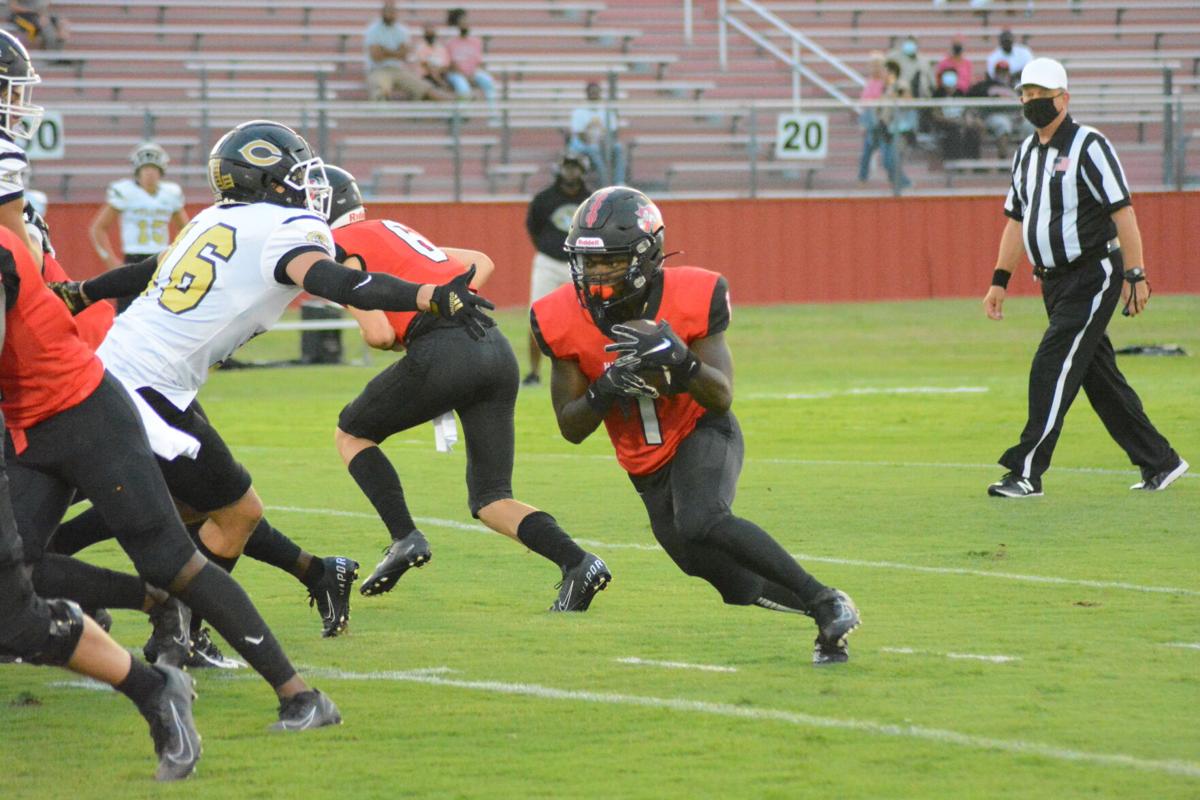 Hartsville running back Carmello McDaniel (1) runs with the ball Friday during a 43-37 loss to Camden at Kelleytown Stadium in Hartsville.

“We are our own worst enemy right now,” Calabrese said.

Inopportune penalties and an inability to slow down the Bulldogs’ offense in the second half were the two biggest factors that contributed to the Red Foxes falling to 0-2 on the young season. The teams traded scores back and forth all night until Camden took the last lead with 1:26 remaining.

Calabrese’s squad will look to regroup for another big test next week when 3A power Gilbert comes to Kelleytown Stadium. Hartsville picked up the game on Thursday night.

In the meantime, Hartsville will look to try to fix some of its nagging issues. That probably starts with penalties. The Red Foxes were flagged eight times on Friday.

It wasn’t just the number, however, as several of them resulted in Camden keeping drives alive or giving the Bulldogs much better field position.

Two penalties on Camden’s opening drive helped lead to the first touchdown of the night by the Bulldogs. Another drive was prolonged by an offside penalty on fourth down, although Hartsville was able to negate that one by jumping on a loose fumble shortly afterward.

The Bulldogs’ final drive of the night – which resulted in the game-winning touchdown – started with a negative run that was erased on a personal foul call.

“Too many catastrophic penalties,” Calabrese said. “You know you have fourth down and you jump offside early in the game – just little stuff, and we’ve got to clean these things up. ...

“I felt like we took a step, but we’re still a long ways away from where we need to be.”

Despite Camden scoring on all of its second-half possessions, Hartsville still had a chance to pull out an improbable win at the end. Getting the ball back with just over a minute to go, the Red Foxes marched to the Bullldogs’ 22, helped by a Camden penalty this time.

But a couple of negative plays, including a sack, resulted in a fourth-and-long situation, and quarterback McKendrie Douglas’ final pass fell just short of his receiver near the 10-yard line as Hartsville was looking for a first down.

“You’ve got to learn to make those plays,” Calabrese said. “Camden made them and they won and we didn’t. We put ourselves in position to do it. We just didn’t get it done tonight.”

Hartsville did make strides from last week’s season-opening loss to May River, Calabrese pointed out. Carmelo McDaniel scored three touchdowns and J’Shawn Anderson – who received an offer from the University of Kentucky earlier Friday – added another score as Hartsville chewed up more than 250 yards on the ground.

Douglas also had a solid day passing with nearly 200 yards. He hit Roddi Morris and Jonathon Flemister for bombs of more than 60 yards, including a 68-yard strike to Flemister that gave Hartsville another brief lead in a wild third quarter. The two teams scored three touchdowns in a span of less than 55 seconds.

“I felt like we played a lot faster,” Calabrese said. “I thought our young players started to recognize some things. …Listen, we’re a long way from being a good football team, and we’ve got to continue to jump and continue to get better every day.”

KELLEYTOWN, S.C. − A late touchdown run by Camden proved the difference as Hartsville dropped a 43-37 decision to the Bulldogs on Friday at Ke…

Hartsville running back J’Shawn Anderson (2) and Carmello McDaniel (1) celebrate a touchdown Friday during a 43-37 loss to Camden.

Hartsville running back Carmello McDaniel (1) runs with the ball Friday during a 43-37 loss to Camden at Kelleytown Stadium in Hartsville.