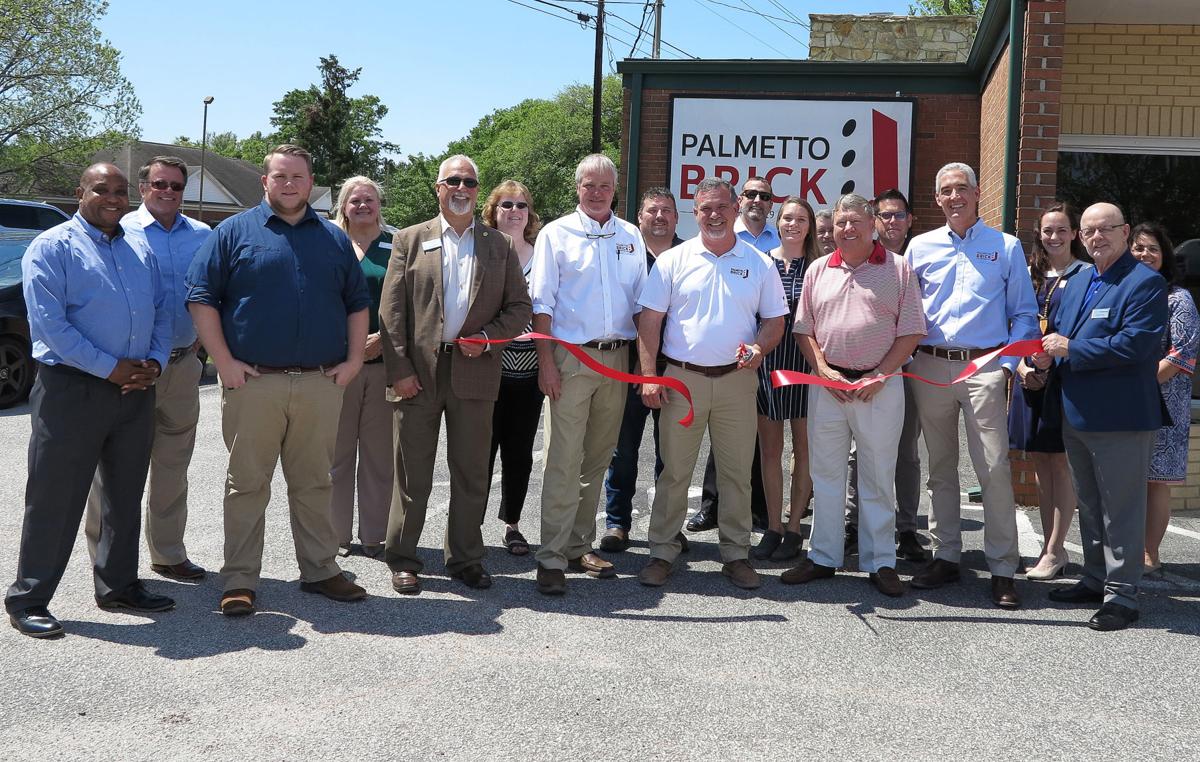 Greater Florence Chamber of Commerce ambassadors joined Palmetto Brick for a ribbon cutting for their membership into the chamber. The event was followed by an appreciation lunch for the company’s 100th anniversary. 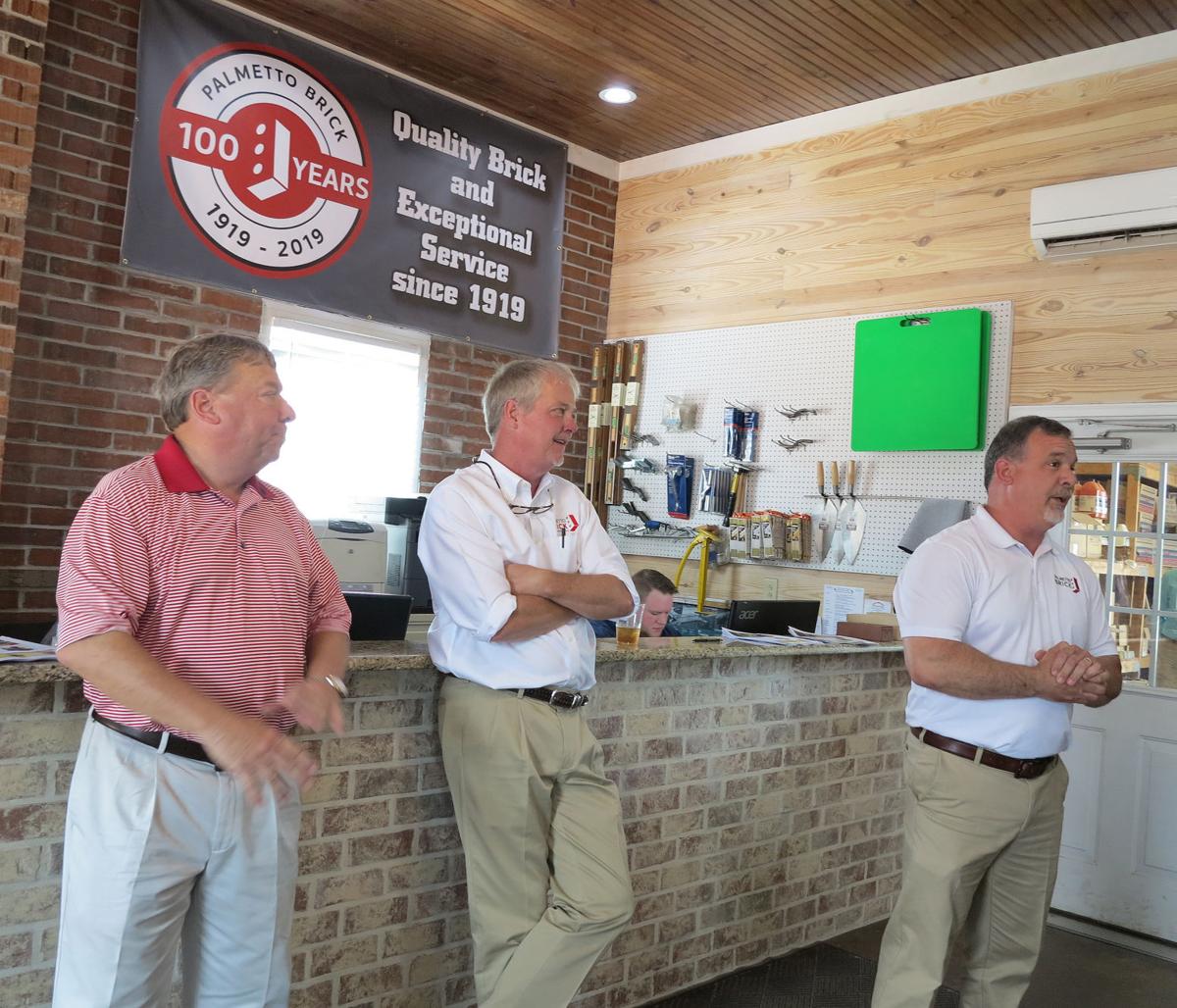 FLORENCE, S.C. – Palmetto Brick is celebrating its 100th anniversary this year. Family-owned and -operated since 1919, the brick manufacturing plant is in Wallace with retail showrooms in Florence, Myrtle Beach and locations near Charlotte, North Carolina.

To celebrate its anniversary, the company is hosting events in all of its retail stores. On Thursday, in conjunction with a ribbon cutting for its membership in the Greater Florence Chamber of Commerce, Palmetto Brick served lunch at its Florence retail store on Melon Street.

Andy Rogers, vice president and a fourth-generation family member to work in the company, said the company was started in Wallace on the Pee Dee River by his great-grandfather.

Without any one of them, he said, it wouldn’t have lasted 100 years.

“My father or I have been buying brick from Palmetto Brick for over 70 years,” said Bill Segars of Segars Construction Company in Hartsville, who stopped by to congratulate Palmetto Brick on its success and 100 years in business. “From the family ownership, though management, sales and service to the truck drivers; Palmetto Brick has always been a first rate vendor with a quality product. They have a product that we need. We order it, they send it, we pay for it. This type arrangement makes our job in the field much easier.”

“The company continues to learn and grow,” said John Sanderson, Carolina Sales manager. “It takes the whole ball of wax to make a company grow.”

“We have supplied brick for a lot of offices and homes in the area,” Rogers said. “We sell brick in 31 states and Canada.”

The company has 107 employees with six in the Florence office.

“The most popular right now are the lighter shades of brick,” Rogers said.

For commercial buildings, he said, their best seller is a “true white” brick. He said very few companies can make it.

“We are a green product,” he said. “We take clay out of the ground and burn it with natural gas.”

He said one-third of the company’s electricity comes from a solar farm.

“It is awesome,” he said. “We have been operating with it for close to a year.”

According to the company’s website “Palmetto Brick is the largest family-owned brick maker in South Carolina with a capacity to produce more than 150 million bricks a year. It remains one of only a handful of American-owned and -operated brick manufacturers in the U.S.”

FLORENCE – Egi Oakman-Black with Southwestern Coaching held a ribbon cutting on Monday at the SiMT Manufacturing and Business Incubator celebrating her membership in the Greater Florence Chamber of Commerce. Members of the chamber staff and ambassadors joined Oakman-Black for the celebration.

Social Security's 65 million beneficiaries are on track to receive their biggest monthly pay bump since 1983.

Here's what you should know if you're planning on purchasing an electric vehicle in the near future. Also, check out more of the week's best money tips from experts.

FLORENCE – Lauren Piner, a Realtor with eXp Realty, celebrated the opening of her business and joining the Greater Florence Chamber of Commerc…

Will Saving in an IRA Alone Shortchange You in Retirement?

No 401(k)? Here's what you need to know about your retirement prospects.

FLORENCE, S.C. – AROHA Afro Latin Dance celebrated the opening of its new studio Thursday on Dargan Street in downtown Florence. The Greater Florence Chamber of Commerce shared in the celebration with a ribbon-cutting ceremony.

QUINBY, S.C. – Empathy Care at Home LLC held a ribbon-cutting ceremony Tuesday to celebrate its opening and membership in the Greater Florence…

Greater Florence Chamber of Commerce ambassadors joined Palmetto Brick for a ribbon cutting for their membership into the chamber. The event was followed by an appreciation lunch for the company’s 100th anniversary.