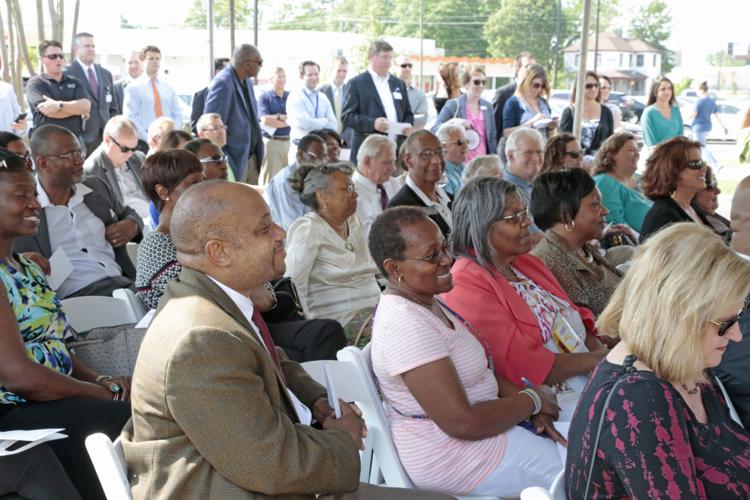 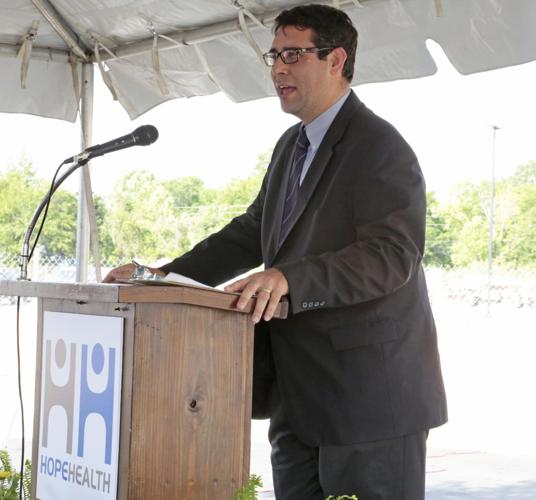 Florence Mayor Stephen Wukela talked about the city's role in fostering the creation of the new HopeHealth facility during a ribbon cutting Thursday afternoon. 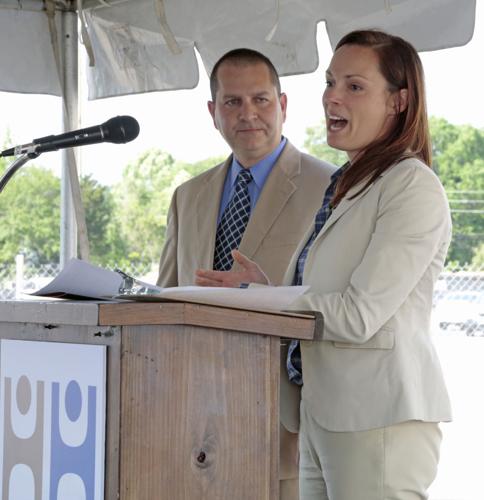 Amber Turner, senior business relationship manager for Wells Fargo and new board chairwoman for HopeHealth, spoke about the renewed mission for HopeHealth during a ribbon cutting Thursday afternoon. 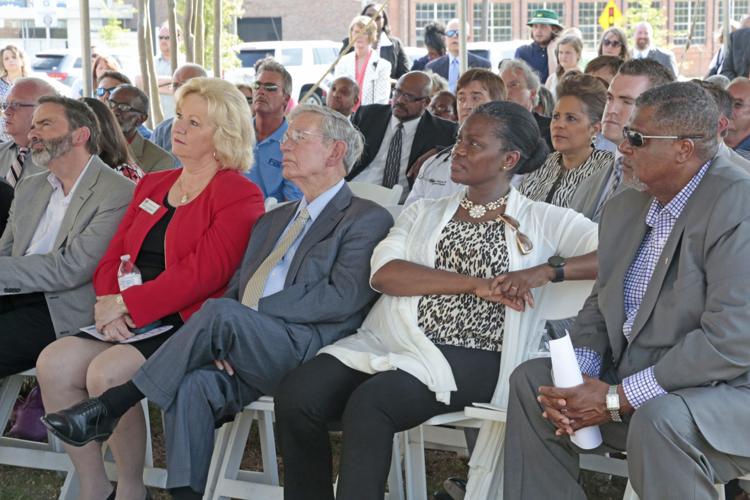 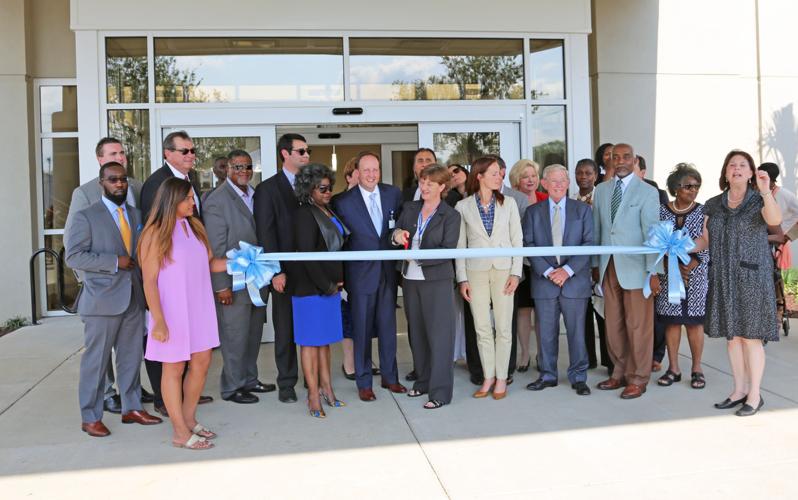 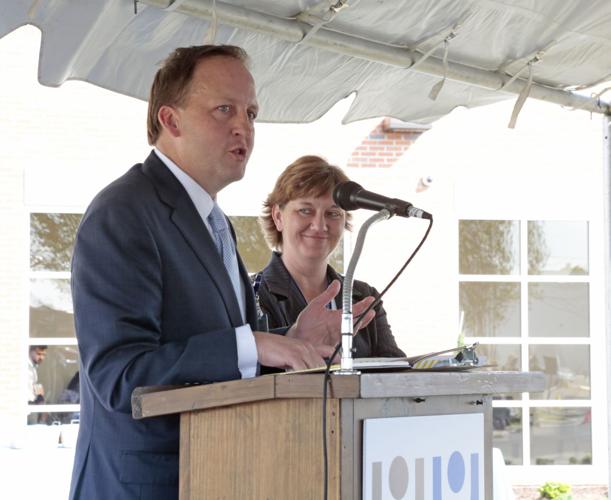 FLORENCE, S.C. – What was formerly a junkyard is now celebrated as an example of what can happen when local, state and federal stakeholders work together to bring about positive change.

The new HopeHealth facility at 360 North Irby Street hosted a late Thursday afternoon ribbon cutting with several speakers who all sought to pay tribute to the hard work and dedicated efforts of elected officials and the health care and business community in transforming the former Bush Recycling grounds into a multi-faceted 47,889-square-foot building.

HopeHealth’s facility houses eight medical suites, a laboratory, radiology, pediatrics department, pharmacy and administrative offices. A cafe is scheduled  to open in this spring and a second phase of construction will see an additional 40,000 square feet with supplemented services.

Darryl Bridges, the outgoing chairman of HopeHealth’s board of directors, noted that at the outset of his tenure in 2010, there were 65 staff members and about 3,000 patients.

Since then, he’s seen highs, lows, challenges, success and some heartburn, but with “innovative partnerships, a supportive community, a talented and very hardworking staff, and no small amount of risk taking – and with Carl’s visionary leadership – we now serve over 35,000 patients with 320 team members in multiple locations and counties.” Carl Humphries is CEO of HopeHealth.

Expanding high-quality health care that’s not only accessible but affordable has been central to the mission, which has inspired him personally and professionally, Bridges said.

Amber Turner, who is taking over as chairwoman of the board, said there were several people in the crowd who well understood the trials faced in bringing about the facility. She also praised Bridges’ leadership and dedication as well as the work of board members past and present.

“As you might imagine, during times of change such as these, looking forward creates the opportunity to look back. For 25 years HopeHealth has provided quality health care across the spectrum of services,” she said. “Twenty-five years of success.”

Knowing your identity and mission is the foundation of a strong organization, Turner said. HopeHealth is committed to a renewed mission with love for people and a passion for their well-being with a vision of serving others, giving hope and changing lives, she said.

Key values include compassion with “a deep empathy for those in need,” along with high ethical and moral standards and transparent actions. Being accountable, acknowledging and correcting mistakes while fostering innovation and excellence are also part of the renewed mission, she said.

“We look forward to a future of providing hope,” she said.

Humphries said it’s an honor to be chief executive officer of HopeHealth, and he was quick to acknowledge Deena Hilton, chief operations officer, whom he called “the backbone of HopeHealth.”

Hilton said she could never have imagined the result of the new facility when they first sought grants several years ago.

Humphries said that Francis Marion University President Fred Carter was one of the first people who mentioned the land might be available and said he was considering a joint project with FMU.

“If you see him, thank him for finding somewhere else so we could have all the land to ourselves,” Humphries joked. “We do appreciate that.”

A $5 million federal grant that was key in making HopeHealth’s facility a reality was boosted with bipartisan support, and state Sen. Hugh Leatherman has always been forthright and helpful, he said, along with Rep. Terry Alexander.

The Florence City Council played a huge role in getting the land donated, he said.

“I believe we have the best leadership team in South Carolina,” Humphries said.

A recent report shows that HopeHealth has an economic impact of 211 direct jobs, 130 indirect jobs, $5 million in tax revenue and $40 million in cost savings related to health care, he said.

“But you guys know I’m a social worker. I care most about what happens inside these walls,” he said, using the example of woman in her 30s who came in for a checkup and was able to talk about her spouse physically abusing her. She was connected with resources “to feel safe and get her life back,” he said.

Humphries mentioned a local businessman with good insurance who comes to HopeHealth because of the high quality of health care and because he “wants to pay it forward.”

Dozens of people have been assisted with special programs, he said, and have gotten “a hand up when life’s circumstances put them short on their rent or utility bill.”

“If these walls could talk they would tell you about our employees that consider this part of their mission in life, not just a job -- men and women that come to work every day knowing they have an opportunity to speak nice to someone who desperately needs it,” he said. “The chance to speak an encouraging word, to give a warm hug and offer hope to someone that feels they’re at the end of their rope. These are things that make today matter the most.”

FLORENCE, S.C. – Buddy’s has opened in Florence with a simple main menu of burgers and fries. Buddy’s is at 2519B W. Palmetto St. in Florence,…

FLORENCE, S.C. – A ribbon cutting was held Wednesday afternoon for A&J Firearms and Training to celebrate its opening and membership in th…

FLORENCE – A ribbon cutting was held Monday at Yummy House, 1555A W. Palmetto St., celebrating its membership in the Greater Florence Chamber …

US inflation slips from 40-year peak but remains high 8.5%

U.S. inflation slowed to 8.5% in July as falling gas prices gave Americans a slight break from a 4-decade peak earlier in the summer.

As prices surge, store brands have become an attractive option, but their origins remain largely secretive.

FORT WORTH, Texas (AP) — Derek Kerr might have the hardest job in the airline business. He's the chief financial officer of American Airlines, and that means it's his job to fix a balance sheet that has been battered by borrowing money so American could survive the pandemic. American has the most debt among all U.S. airlines, and its credit rating is several notches below investment grade. Kerr talked to The Associated Press recently as American is trying to navigate through a bumpy recovery in which revenue is rising, but so are costs like fuel and labor.

FLORENCE, S.C. – The School of the Great Commission Bible College and Seminary Pee Dee Satellite will open on Aug. 13 at 307 Second Loop Road …

Ceremony recognizes the Best of the Pee Dee

What insurance will a student need before heading to college? Find out on the PennyWise podcast!

Don't forget insurance before sending your child off to college. Learn more on the PennyWise podcast.

Gas prices fall below $4 per gallon

Bear gets drunk off honey in Turkey

Bear gets drunk off honey in Turkey

Florence Mayor Stephen Wukela talked about the city's role in fostering the creation of the new HopeHealth facility during a ribbon cutting Thursday afternoon.

Amber Turner, senior business relationship manager for Wells Fargo and new board chairwoman for HopeHealth, spoke about the renewed mission for HopeHealth during a ribbon cutting Thursday afternoon.