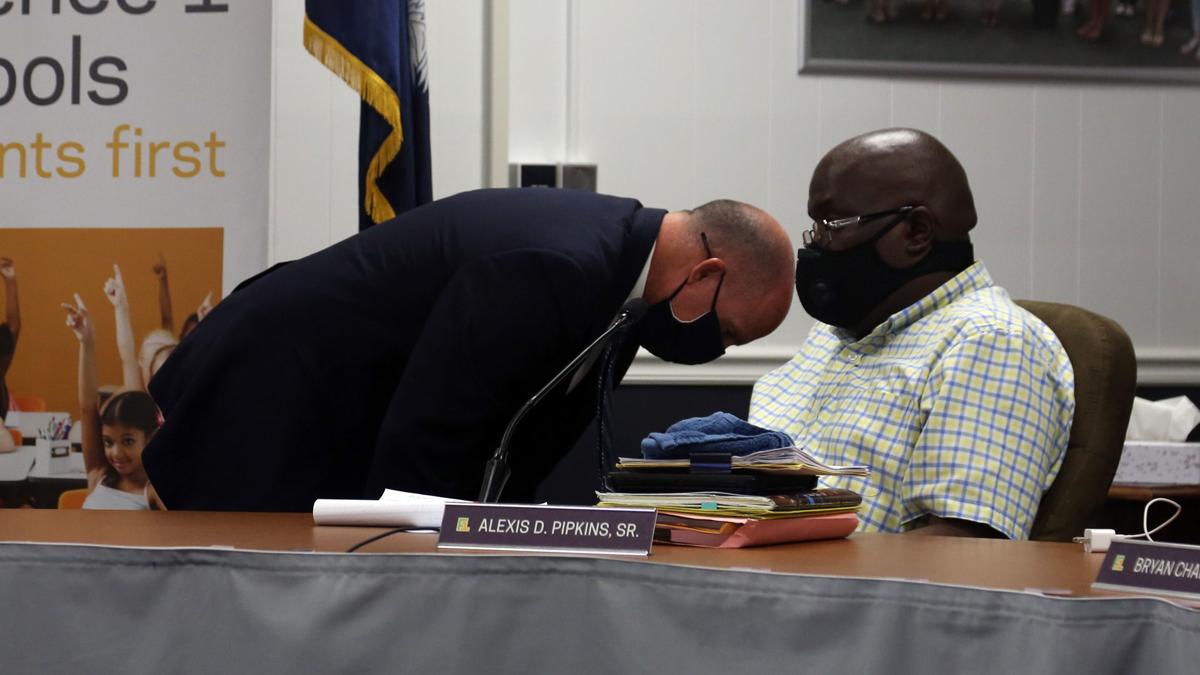 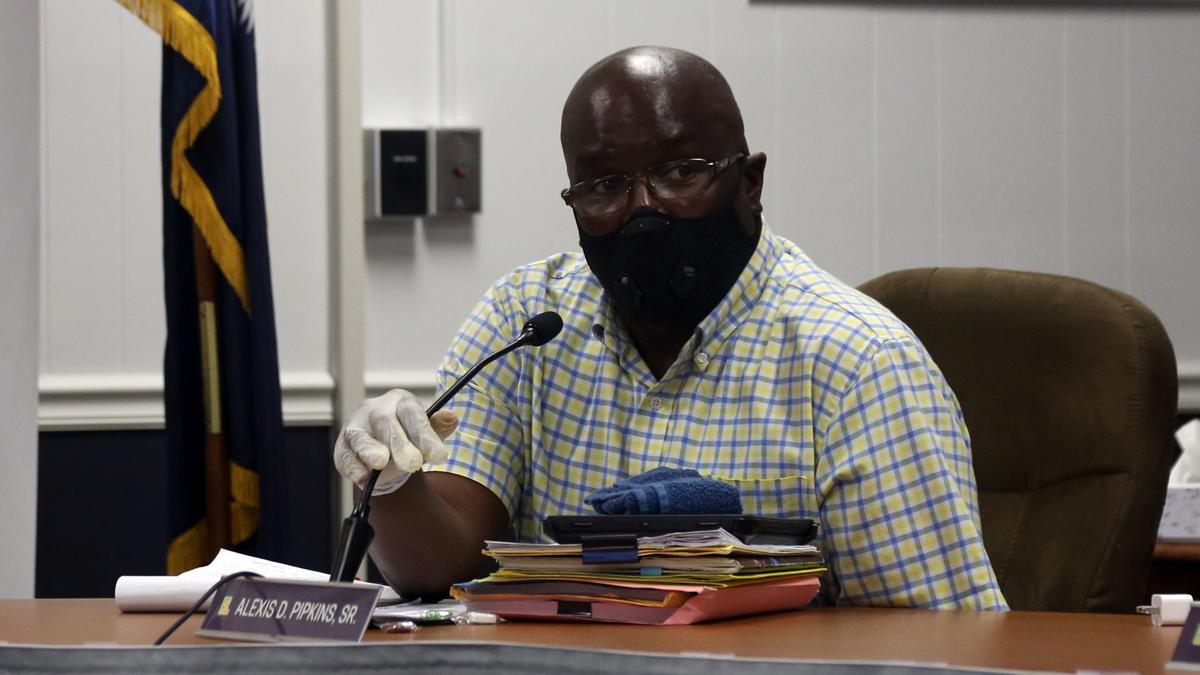 Florence One Schools board member Alexis Pipkins offers an apology to Superintendent Richard O'Malley at a July 1 meeting. 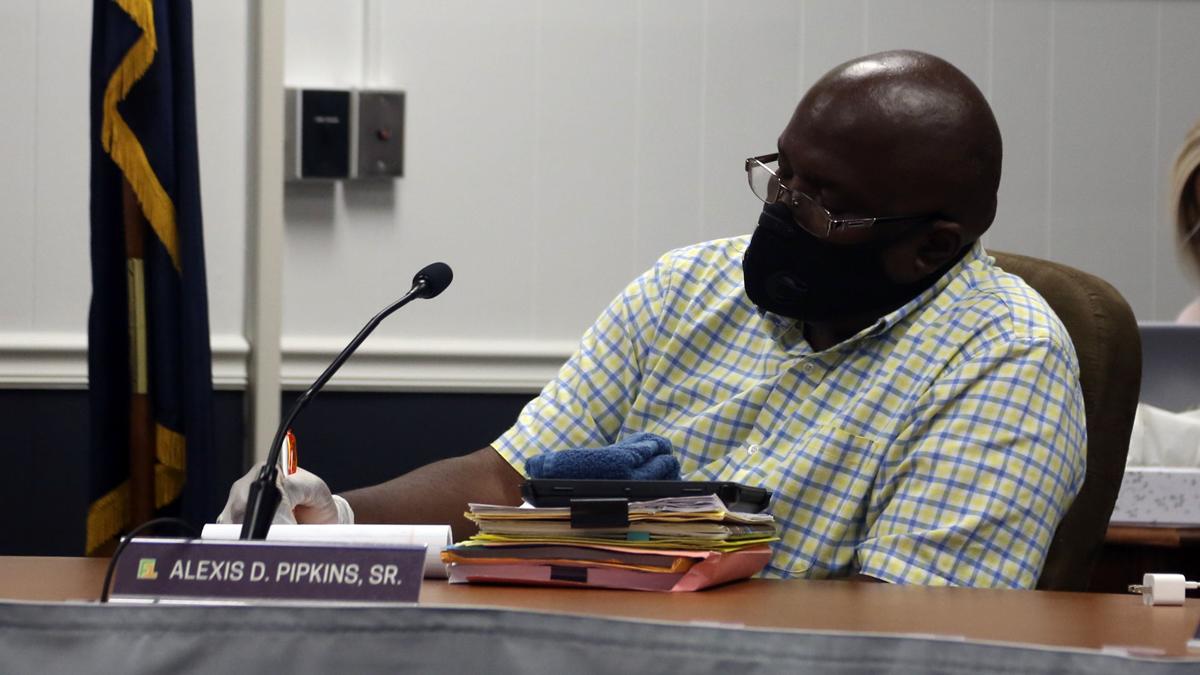 Pipkins spoke at a called board meeting Wednesday evening.

"After conversation with the superintendent and also considering the fact that I am lifelong resident of this community, recognizing that my children are part of this community and also recognizing that invaluable experience that I have with children and families and also the nearly 20 years that I've had working and serving on this board, I understand the importance of, No. 1, establishing collaboration and mutuality and I also understand the importance of being able to establish levels of respect," Pipkins said.

He added that the board has the opportunity to bridge the gaps in society and destroy the gaps once and for all.

"After tonight after we've all had the opportunity to listen and to exchange, I would offer to this community, the superintendent as well as to this board, to agree to work with the superintendent," Pipkins continued.

He added that he and O'Malley had discussed their actions and agreed to be respectful in the future.

O'Malley said he accepted Pipkins' apology and agreed to work with Pipkins to learn about his community and the concerns of the people living there. He also said it was time to put aside differences and move forward for the betterment of the community.

The apology came after an executive session of over two and half hours and comments from board Chairman S. Porter Stewart II that implied that an apology or legal action would follow the meeting.

A motion to censure Pipkins was made at the meeting Wednesday evening by board member Barry Townsend and seconded by Bryan Chapman but was withdrawn before Pipkins' apology.

The board's harassment/non-discrimination policy includes language indicating that harassment includes "name calling, physical conduct, or other behavior directed toward an individual" that "creates an intimidating, demeaning or otherwise hostile environment for education."

Board policy on member conduct includes language indicating each board member is responsible for working harmoniously with the other members.

The board's policy of ethical conduct of board members indicates that each board member should maintain good relations with the superintendent of schools by striving to provide adequate safeguards so that the superintendent and other staff members can live happily in the community and discharge their educational functions on a thoroughly professional basis.

Board Vice Chair Trisha Caulder said the board needed to support O'Malley after Pipkins' comments at the meeting on June 25. She also said the community wanted something to be done.

Board member John Galloway said he felt like the board needed to support O'Malley but that censure was a step too far.

Stewart then called a brief recess and consulted with O'Malley, Pipkins, and legal counsel. After returning, Pipkins asked that Townsend and Chapman withdraw their motion.

Townsend then asked if that would speed things along.

Stewart replied in the affirmative and then Townsend and Chapman withdrew their motion.

The argument between O'Malley and Pipkins apparently began after an executive session ended but before the board reconvened in open session on June 25.

The executive session was held to discuss O’Malley’s performance as superintendent.

The board voted 5-3 to give O’Malley the highest rating possible and a resultant bonus later in the June 25 meeting.

Multiple people indicated that the argument began after the executive session ended but before the regular meeting began.

Pipkins reportedly asked O'Malley about not wearing a mask — one person at the meeting said O'Malley was the only one not wearing one — and O'Malley replied by asking Pipkins about signing a COVID-19 questionnaire and temperature test to get into the meeting.

On a recording of their exchange, O’Malley shouts "Get out" apparently toward Pipkins over the form issue, and Pipkins can be heard asking if O’Malley was incompetent, then answering his own question by saying yes.

Several people then begin talking at the same time.

Pipkins then makes reference to a "little white man's seat."

"That's just as racist as it want to be," Pipkins continues.

"I'm going," Pipkins responds. "Don't be pointing at me."

"You're not going to bully me, sir," O'Malley responds.

"You're not going to [inaudible word] at me, you little Napoleon," Pipkins says.

FLORENCE, S.C. -- Some old paper boxes that had just been collecting rust in a back parking lot will get a second life and a chance to make a difference for some people in need.

Turkey escapes before getting pardoned

TIMMONSVILLE, S.C. -- One person died and a second was injured in a central Florence County crash Tuesday night.

FLORENCE, S.C. -- The oldest American Legion post in the state is looking for more than a few good, young members as it looks to reinvigorate itself moving forward.

Florence One Schools board member Alexis Pipkins offers an apology to Superintendent Richard O'Malley at a July 1 meeting.