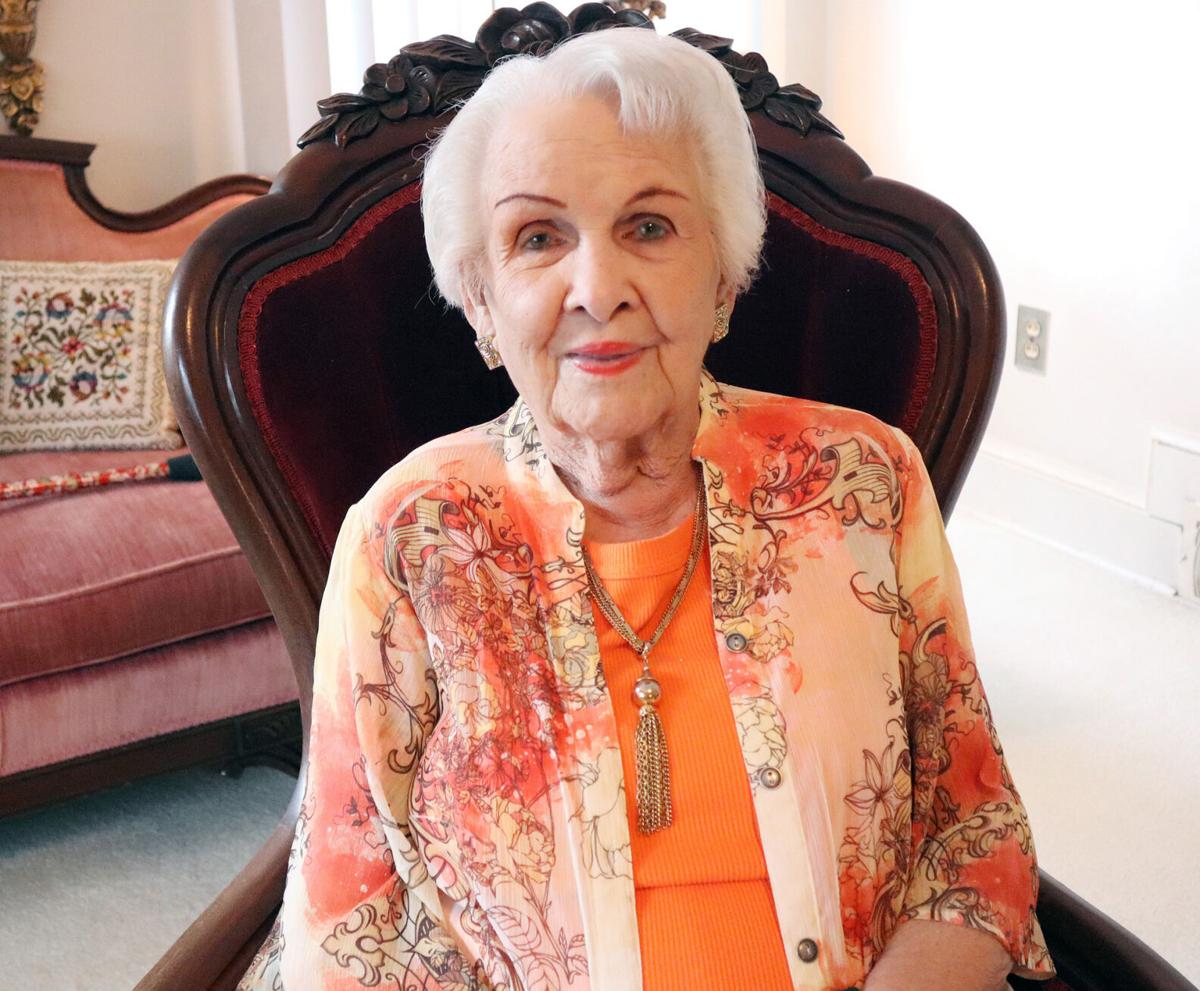 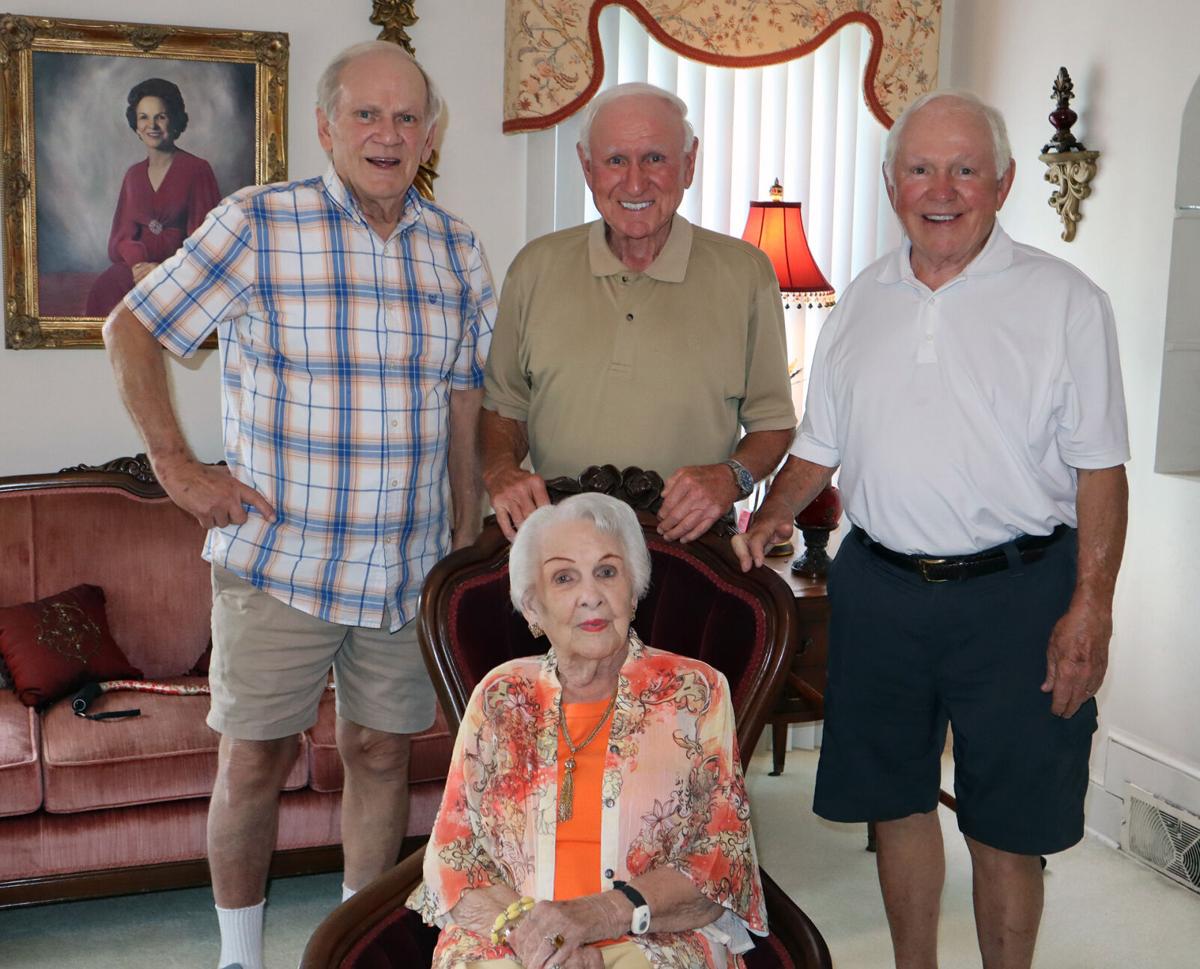 Annie Mae Yarborough poses with her three sons (from left), J.C., Cale and Jerry, for a family photo on her 100th birthday. 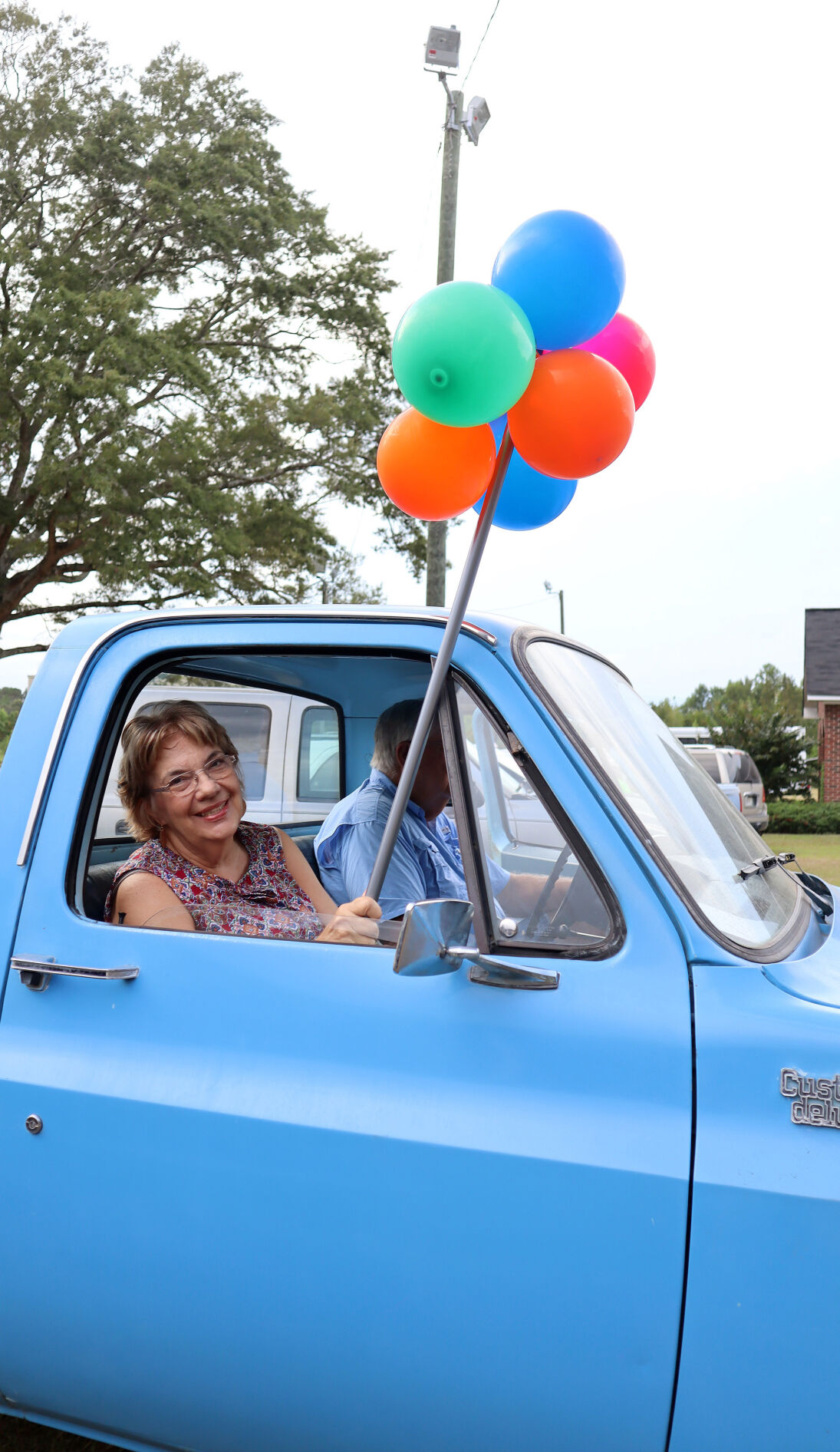 Elaine and Jimmy McElveen decked the old blue truck out with balloons to join the car parade in Sardis to Annie Mae Yarborough’s house for her 100th birthday. 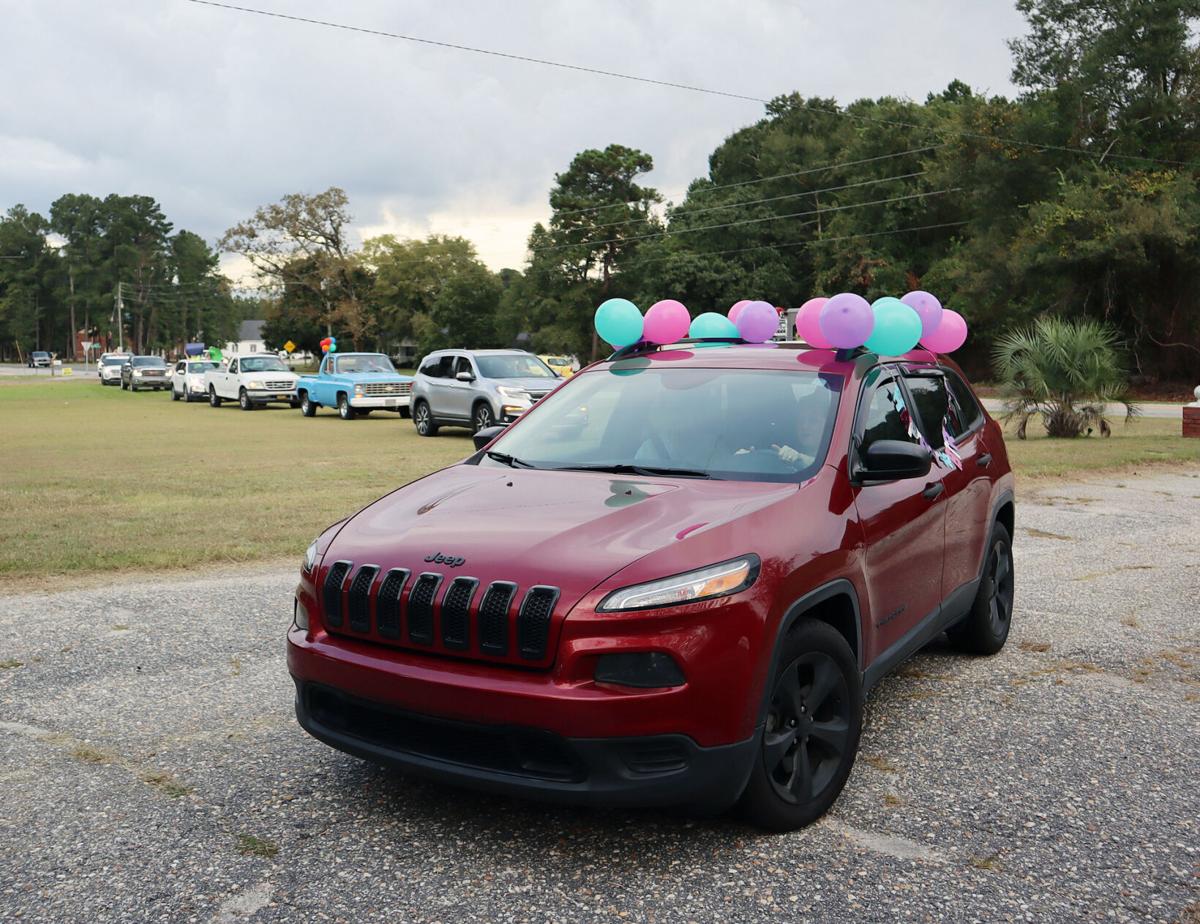 A car parade of well-wishers visited Annie Mae Yarborough for her 100th birthday on Sept. 15. 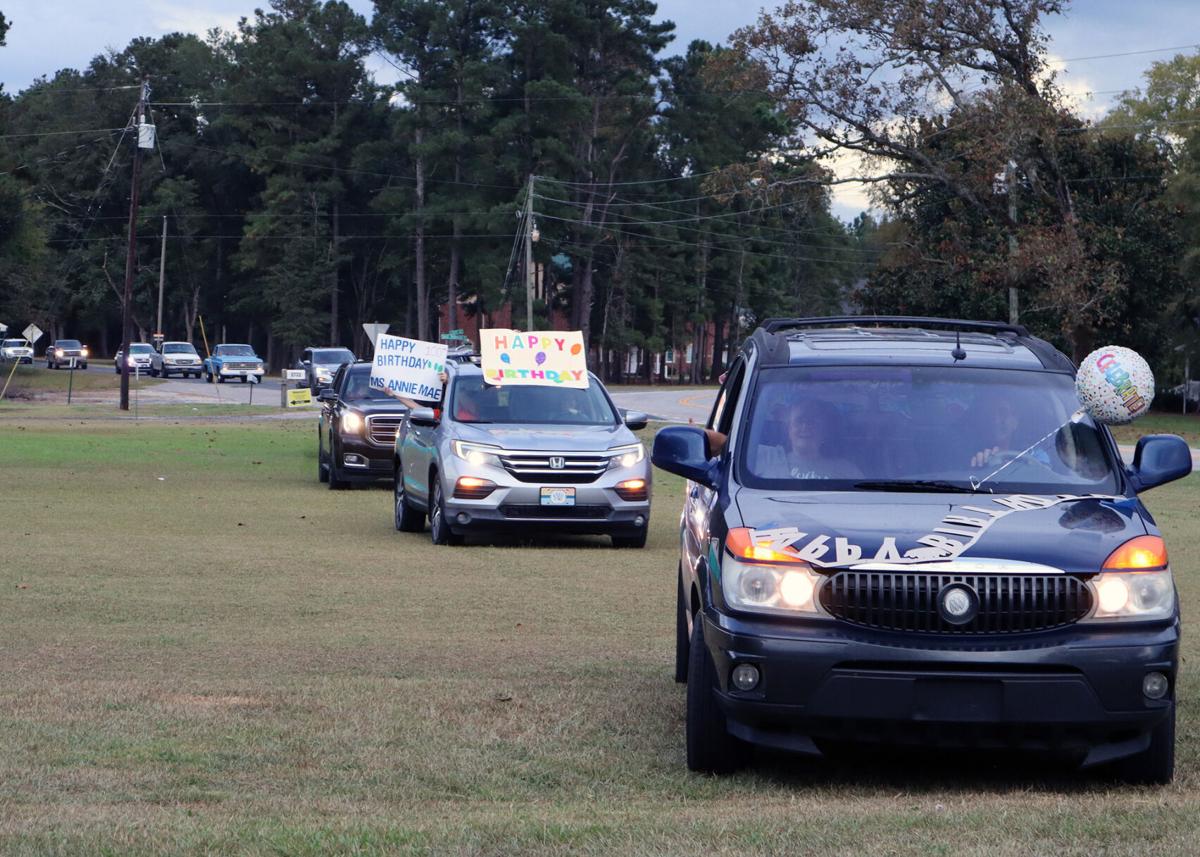 A parade of cars carrying well-wishers visited Annie Mae Yarborough for her 100th birthday on Sept. 15. The group met at Sardis Baptist Church, not far from her home. 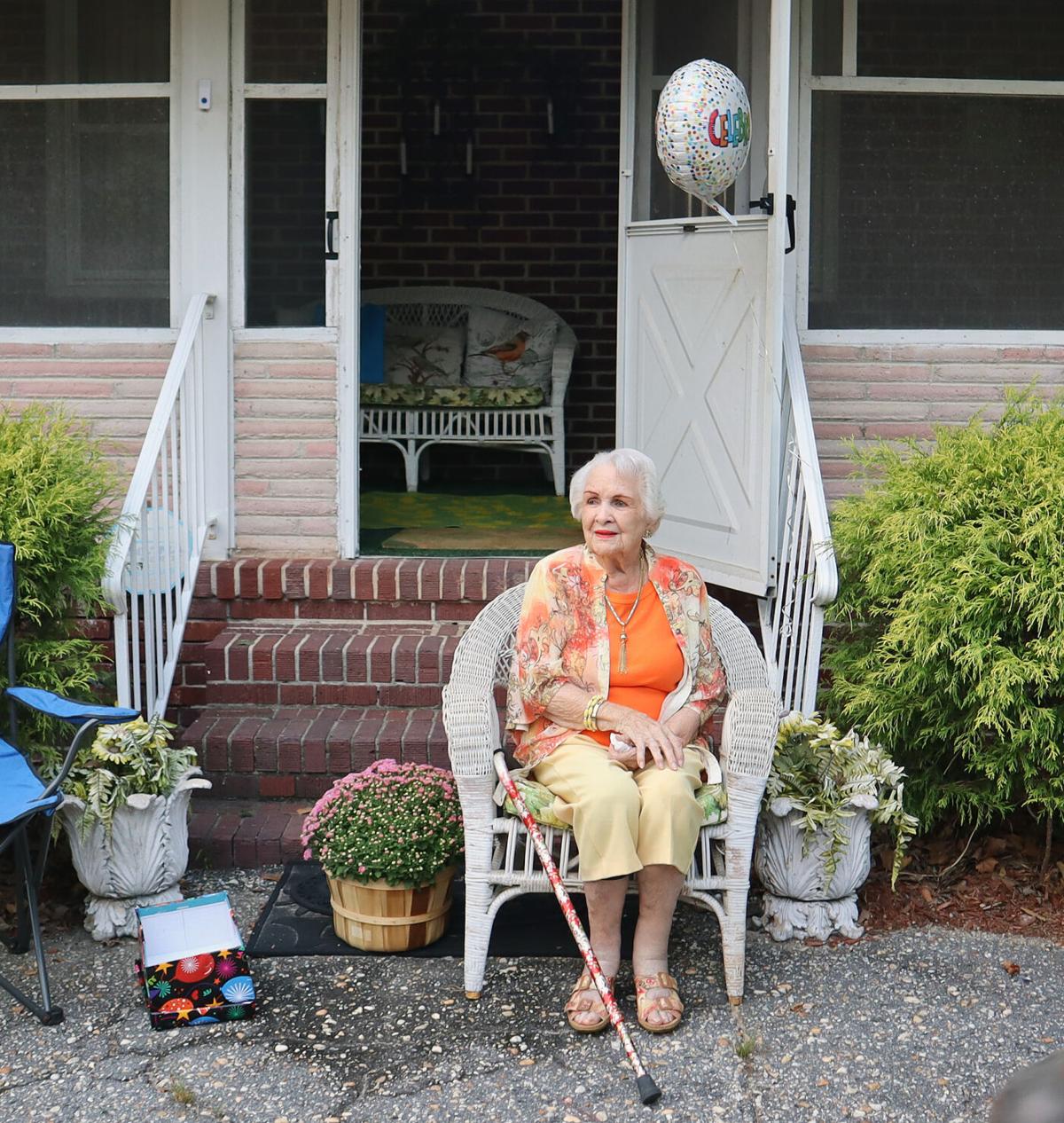 Annie Mae Yarborough watches as a parade of cars come to greet her for her 100th birthday.

She is meticulous about her appearance, and although she celebrated her 100th birthday on Wednesday, she says she doesn’t feel much different than she did in her fifties.

“I feel good. My mind is good and I see well,” Yarborough said.

She admits her body might tell her otherwise at times.

“I like a little Pepsi for breakfast,” she added. And hardly a day goes by that she doesn’t have a least one piece of chocolate candy, but these are not what she attributes her longevity to. It could be in the genes, but she says it’s her positive attitude and faith in God.

“I’ve had a happy life; I love life,” Yarborough said. “It has been good to me even with its ups and downs. I’ve never held a grudge. I love everybody. I love living at Sardis.”

Sardis is a rural community in Florence County where she moved to after marrying one of its own, Julian Yarborough.

Yarborough has never let age stop her; however, COVID has kept her in more than she would like. Before COVID, she drove herself to church on Sundays and sometimes drove her friends out to lunch afterward.

She said he is single and lives nearby, as does her oldest, Cale, a Motorsports Hall of Famer. Jerry lives in Columbia.

At the time, she was working at the dry cleaners in Timmonsville owned by Cale.

Yarborough said she likes to spend time reminiscing about her life, remembering who lived where in the community in years past.

She said she watches a little television and enjoys spending time with family and friends.

On her birthday, Yarborough shared a memory about a birthday long ago when her husband was still living.

“I remember standing at the kitchen sink on my birthday, I can’t remember which birthday it was, but Julian came in, and he said he had me a present,” Yarborough recalled. “He said, ‘I bought you a farm.’”

Yarborough said the farm was in the Peniel community of Florence County, and it cost him $13,000. That was somewhere around 1950.

“I said that’s good Julian, but I wanted a set of dishes,” Yarborough said. “I remember it like it was yesterday. I had seen the dishes at Kress’.”

This year’s celebration wasn’t exactly the birthday bash the family had planned for the centenarian’s special day, but COVID has interrupted many pre-made plans in the past year and half.

That didn’t happen, she said. “But I had my perfect birthday today with my children.”

They all had lunch at Cale’s house. Back home, flowers, balloons and presents continued to be delivered. At 6:30 that evening, members of the church, led by a Sardis/Timmonsville fire truck, formed a birthday parade with cars and trucks decorated with posters and balloons. The caravan circled her driveway as she sat outside and received birthday wishes, and more cards and gifts from her church family and friends.

Yarborough was born on Sept. 15, 1921, and grew up in Olanta. On her 16th birthday, she married the love of her young life, Julian Yarborough.

She said her parents didn’t want her to get married, but it wasn’t that they didn’t like Julian. It was because she was so young, she said.

“I met him waiting on the school bus at Sherwood High School,” Yarborough said. “He came riding up on his motorcycle.”

With a gleam in her eye, Yarborough said, “All the girls were so jealous of me getting to ride home on his motorcycle.”

The couple built the house where she lives today at the gateway to the Sardis community.

They had been in their new home only about a year and three months when Julian died at the age of 31, she said.

At the time her youngest son was only 3 years old.

Yarborough said those were the toughest times having to become a mother and father to three young boys.

“Prayer helped me,” she said. “I lived day to day. Thankfully, I never had a house payment and never had a car payment. Julian had just purchased a new car before he died. But I had to feed a lot of mouths.”

Yarborough said her boys were good children but says she disciplined the old-fashioned way when needed.

“She took a belt to us when we needed it,” Jerry said, which according to his mother was rare.

“I never spanked J.C.,” she said, and the other two boys only once or twice.

She said her boys have grown up to be loving sons.

“Mother is the finest Christian lady I have ever met, and it is a pleasure to be her son,” said Jerry, who was home for her birthday. “She always taught us to treat other people as we would want to be treated and to have a positive attitude.”

J.C. added, “She taught us to be honest, to love everybody, but most of all to love the Lord.”

J.C. said she raised them to go to church; when the doors were open they were there.

“I turned 74 last week, and I have never heard her say a bad word about anybody.” J.C. said. “She is all anybody could ask for in a mother. She is everything you could ask God for in a mama. I can’t put into words what she means to me.”

Church has been at the center of her life always, she said.

“I joined the church at Bethel when I was 13 years old,” Yarborough said. “I came to Sardis in 1937 and have been a member of Sardis Baptist Church since 1938.”

COVID has interrupted Yarborough’s ability to attend church in person, but her faithfulness hasn’t wavered. She says her favorite Bible verses are John 3:16 and Philippians 4:13.

“For God so loved the world, that he gave his only begotten Son, that whosoever believeth in him should not perish, but have everlasting life.” And “I can do all things through Christ which strengtheneth me.” (King James Version)

She has found strength and courage in these verses throughout her life.

The most significant change that the centenarian has seen in her lifetime is the one occurring today.

“Right now the condition of the world is the most significant change that I’ve seen,” she said.

She said changes occur so quickly that you hardly have time to adjust. She said things are so unstable.

Colin Powell, former general and secretary of state, dead at 84

Film about China defeating the U.S. set to be highest grossing in Chinese history

Film about China defeating the U.S. set to be highest grossing in Chinese history

A former Florence One Schools official has resigned as the superintendent of Dorchester School District 4.

Annie Mae Yarborough poses with her three sons (from left), J.C., Cale and Jerry, for a family photo on her 100th birthday.

Elaine and Jimmy McElveen decked the old blue truck out with balloons to join the car parade in Sardis to Annie Mae Yarborough’s house for her 100th birthday.

A car parade of well-wishers visited Annie Mae Yarborough for her 100th birthday on Sept. 15.

A parade of cars carrying well-wishers visited Annie Mae Yarborough for her 100th birthday on Sept. 15. The group met at Sardis Baptist Church, not far from her home.

Annie Mae Yarborough watches as a parade of cars come to greet her for her 100th birthday.