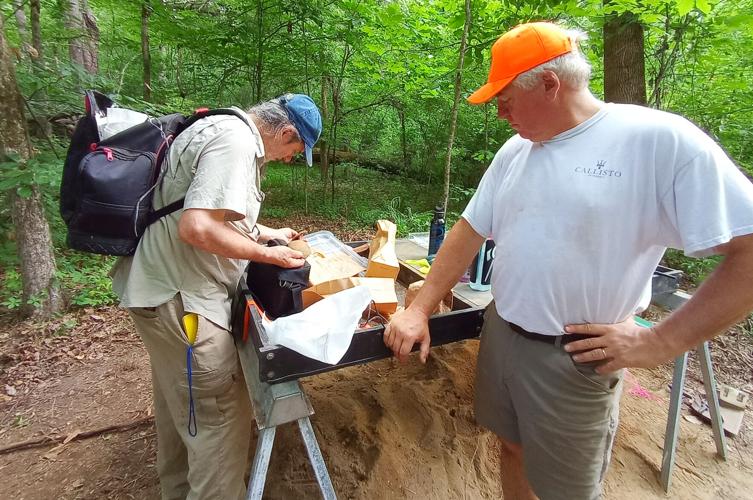 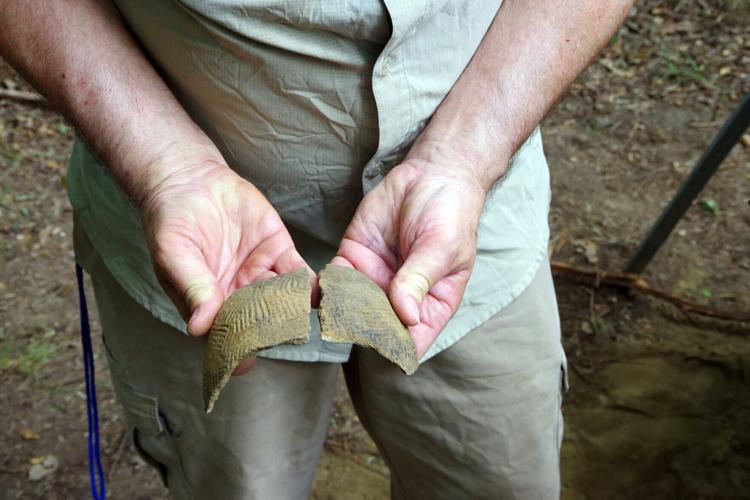 Chris Judge shows how two pieces of pottery found in an archaeological dig in southeastern Florence County match up.

FLORENCE — An archaeological dig at Copperhead Bluff in southern Florence County was successful enough to warrant further investigation, archaeologist Chris Judge told members of the Archaeological Institute of the Pee Dee at a recent luncheon.

That the digging crew was able to stay at a nearby rod and gun club with great fishing was just icing on the cake, Judge said.

Named after the current residents of the site, Judge said archaeologists found evidence of two separate occupations of the site — based on arrowheads recovered in a weeks-long dig on the site during the summer.

The archaeologists also found a lot of pottery shards that link the site to the Mississippian culture that, at one time, occupied the site. The culture got its start along the Mississippi River and spread eastward, Judge said. The society relied heavily on corn agriculture.

This year’s dig had the support of five Indian tribes that represent the most recent native Americans to have lived on the Pee Dee — Waccamaw, Lumbee, Eastern Cherokee and the Sumter Tribe of Cheraw Indians.

Judge showed photos of some of the quickly obvious finds while he and others work through the remainder of what was sifted from the soil at the site.

“We found a little tiny bit of pipe bulb, a reed would have gone into here,” Judge said of a pipe bowl.

A fully intact pipe would have been a better find, but those are extremely rare, he said.

“You have to understand, archaeologists will get excited about the littlest fragment of stuff because we can see the whole,” Judge said.

Judge has the finds from the bluff site and is sifting through them, washing, weighing and separating stone from pottery.

The 2023 dig at the site is already scheduled for earlier in the year to avoid the heat the scientists worked through this year, he said.

Digital Editor Matt Robertson is a veteran journalist who has fulfilled just about every role that a newspaper has and now serves as a key member of the Morning News’ newsroom by maintaining SCNow.com and covering the occasional story and photo assignment.

FLORENCE, S.C. -- A Tuesday morning motel fire lead to the evacuation of second-floor residents of the Comfort Inn and Suits.

FLORENCE, S.C. -- A space heater too close to combustibles Friday morning started a fire that damaged a Florence home and left a family and th…

FLORENCE, S.C. -- In 2013, Dr. Ron Faulkenberry retired from Francis Marion University after teaching in its School of Education for almost 40…

FLORENCE, S.C. -- Investigators are asking for the public's assistance to locate a vehicle and identify suspects in the theft of a fifth-wheel…

FLORENCE, S.C. -- Florence Police have charged a second person in connection with the Sept. 17 hit-and-run death of a Kentrey Levar White-Long…

What exactly surveillance balloons are used for?

What exactly surveillance balloons are used for?

Rescuers work to save quake survivors

Rescuers work to save quake survivors

Chris Judge shows how two pieces of pottery found in an archaeological dig in southeastern Florence County match up.