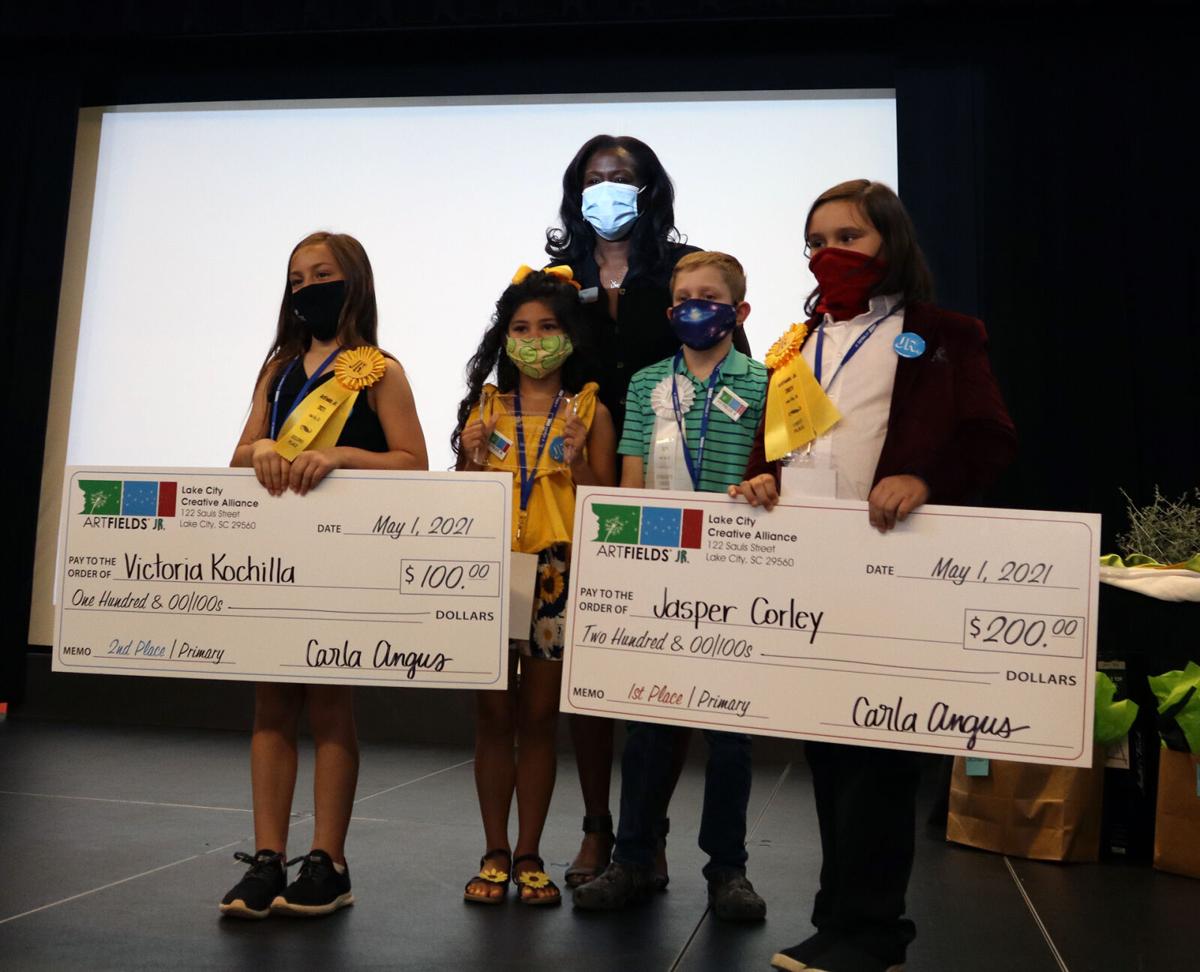 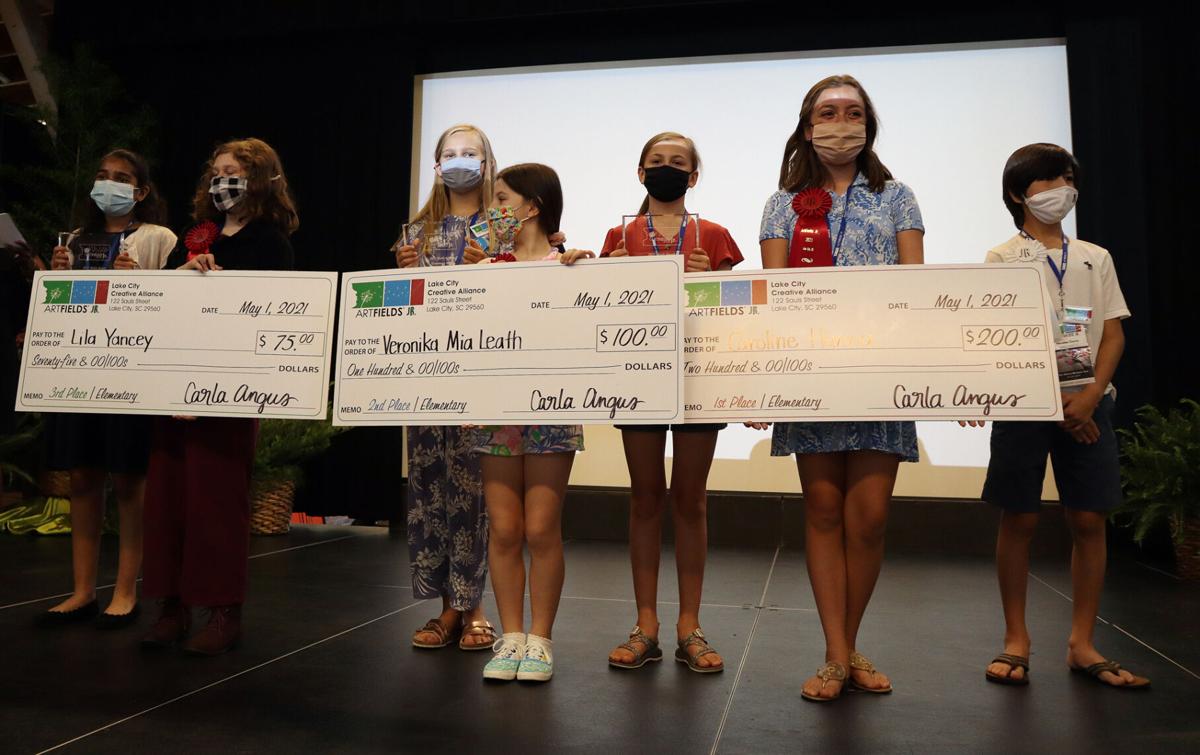 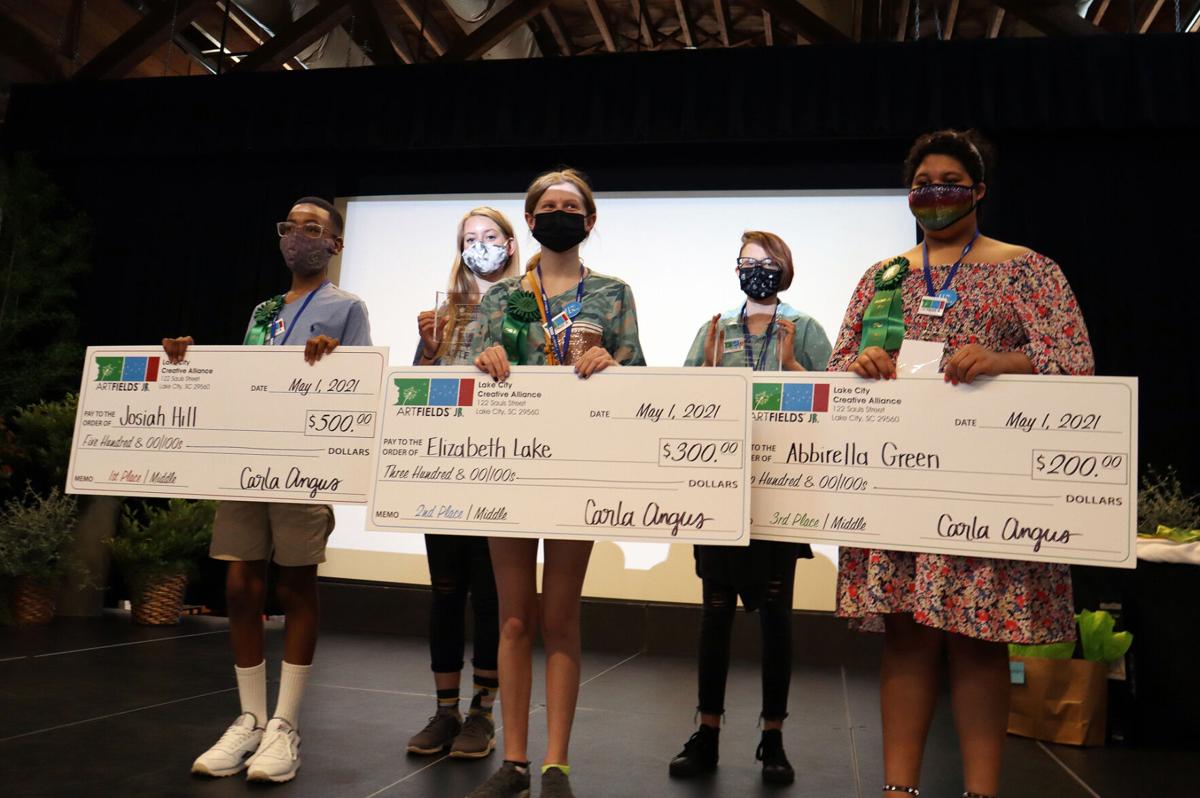 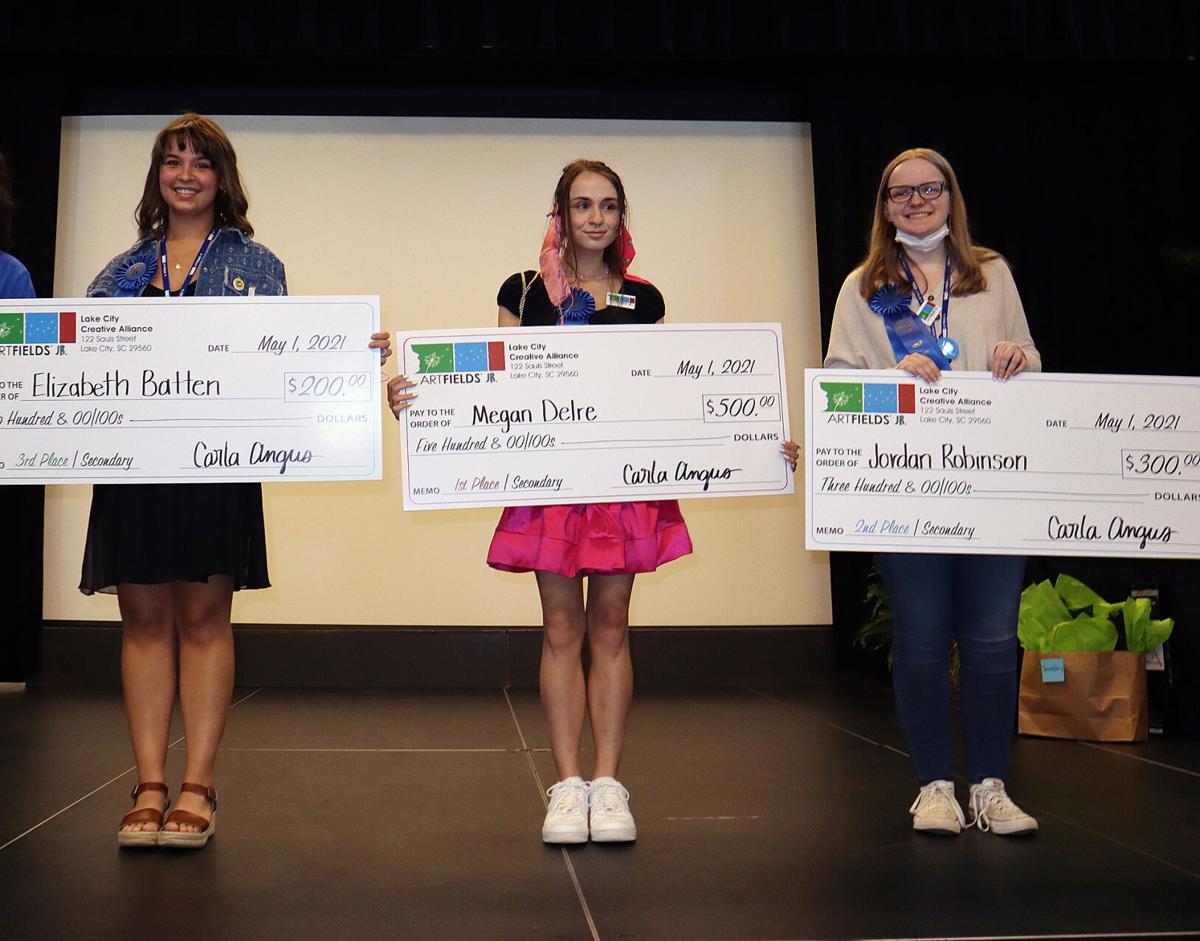 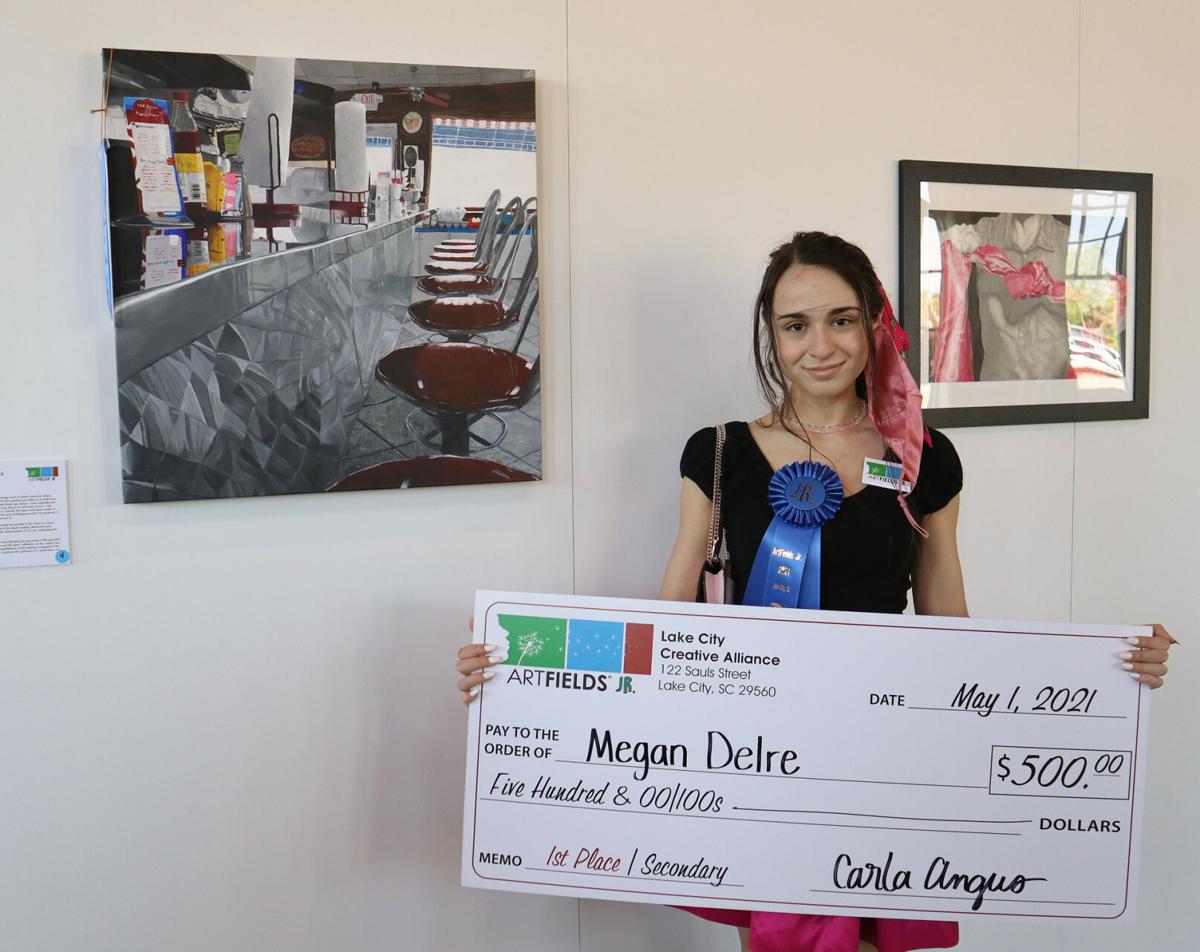 Winner of the Secondary ArtFields Jr. competition was Megan Delre of Clover.

LAKE CITY, S.C. — An excited group of youth gathered at The Bean Market in Lake City on Saturday afternoon to find out if they had won the ArtFields Jr. competition.

The winner of the Primary division, first and second grade, was Jasper Corley. He is home schooled and is in the second grade. He lives in Columbia.

Jasper said this was his first time entering ArtFields. He won with his artwork titled “Drunk Peacock,” mixed media paint on canvas. He said he was inspired by Jackson Pollock when “we went to the art museum.”

In his artist statement, Jasper said, “I like getting messy while painting. It is my favorite way to paint! I created an explosion of warm and cool colors.”

He said he got his talent form his mother. He said she inspires him to paint every day.

With his $200 first-place earnings, Jasper said he hopes to buy some Walking Dead collectibles.

In the Elementary division, grades 3-5, the winner was Caroline Hanna. She is in the fifth grade at Hannah Pamplico Elementary School.

“This is my fourth year entering ArtFields but my first time placing,” Caroline said. “I am so excited.”

She said her inspiration for her winning artwork, “Living in Color” was watching old black and white movies.

In her artist statement she wrote: “Have you ever thought about how the world would look if everything was black and white? While watching some old black and white movies, I decided to try to imagine that world. I used watercolor to first create a picture of people in shades of black, white and gray. The picture wasn’t very fun to draw because it didn’t have any color. The second watercolor was much more fun! I tried to make sure each person I created was unique, just like real people. A world full of colors and people is much more fun than one where everyone looks the same.”

Caroline said she would like to redo her room with some of the $200 she received for the first place award.

It is a little early to tell, but Caroline said she thinks she would like to be a part time artist.

“I have always loved to do art,” she said.

The winner of the Middle division, grades 6-8, was Josiah Hill. He is from Simpsonville and is in the seventh grade.

Josiah said he hopes to become an art professor and a chief editorial director at an art magazine.

“My favorite subject is English,” he said.

His winning artwork is titled “Apollo.” It is oil paint and stain turpentine.

In his artist statement, Josiah wrote: “Apollo is not a physical representation and it’s not simply a portrait. It’s an idea, a principle; it represents a way of viewing the world after going through a raw experience. In this case that raw experience was me coming to the dark reality of racism in my country.”

Josiah’s immediate reaction to his $500 first-place award is that he will keep out $200 for himself and put the rest in his bank account.

The winner of the Secondary ArtFields Jr. competition was Megan Delre of Clover. She is a senior and will be attending SCAD – Savannah College of Art in the fall.

She said this is her first time entering ArtFields Jr.

“I was surprised to place,” she said.

Her entry is titled “Diner,” an acrylic painting.

In her artist statement, she wrote: “I was inspired by Ralph Goings work of classic American diners. The reference image used for this painting was taken in a small town of a two-in-one family owned diner/gas station…Overall, this piece took three months to complete and was one of the most challenging works I’ve produced. It is also the one I am most proud of.”

Delre has already had a one-woman gallery showing.

Delre is thinking about putting her $500 winnings toward college. She hopes to become an art historian while pursuing her art part-time.

Delre said it was great to win, but she enjoyed sharing the moment with her friend and fellow student at Clover High School, second place winner Jordan Robinson.

HARTSVILLE, S.C. – South Carolina Sen. Tim Scott will soon be working "tooth and nail" to see that a South Carolina man receives the Medal of Honor for his service in Vietnam.

Winner of the Secondary ArtFields Jr. competition was Megan Delre of Clover.