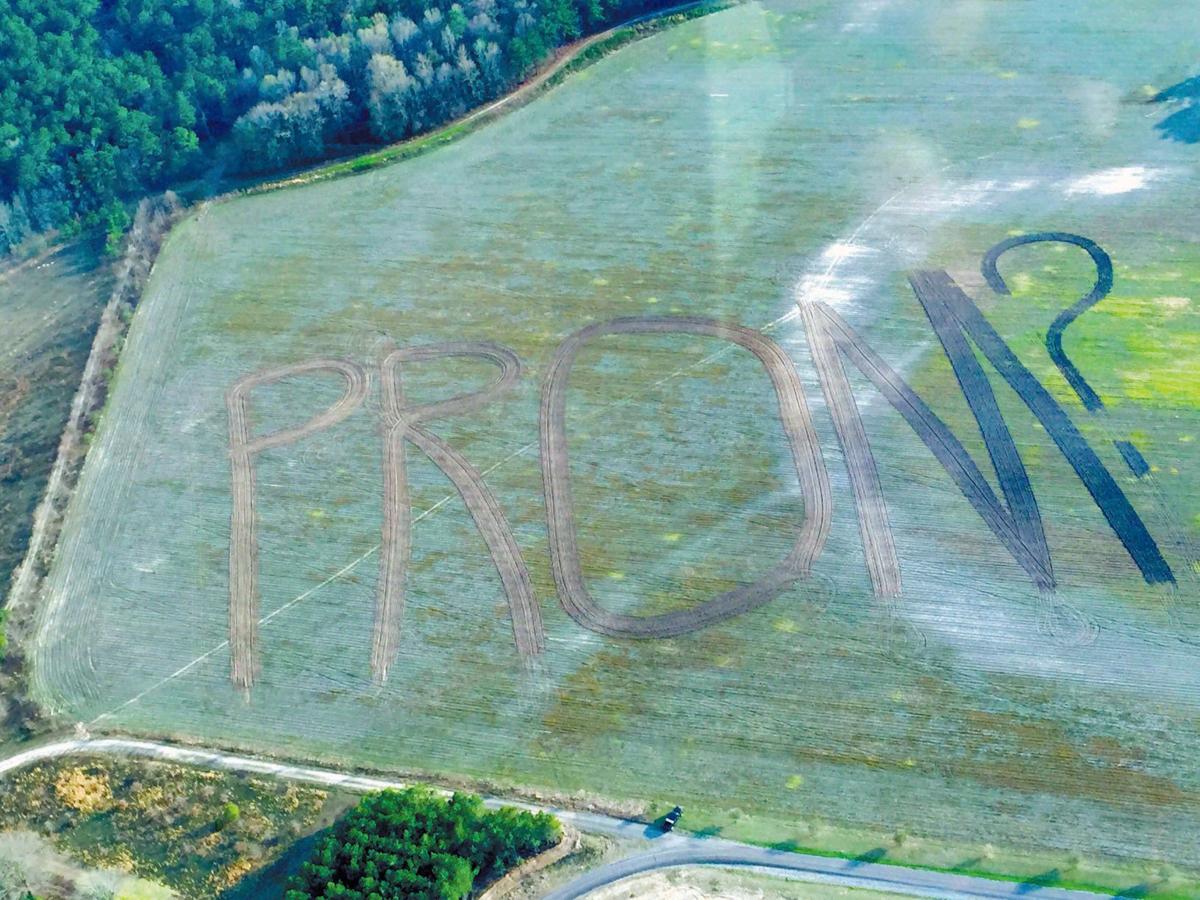 Noah Matthew's "promposal" to Julianne White is plowed into a field in Darlington. At roughly 150 yards tall, the message can be seen from 28,000 feet in the air. 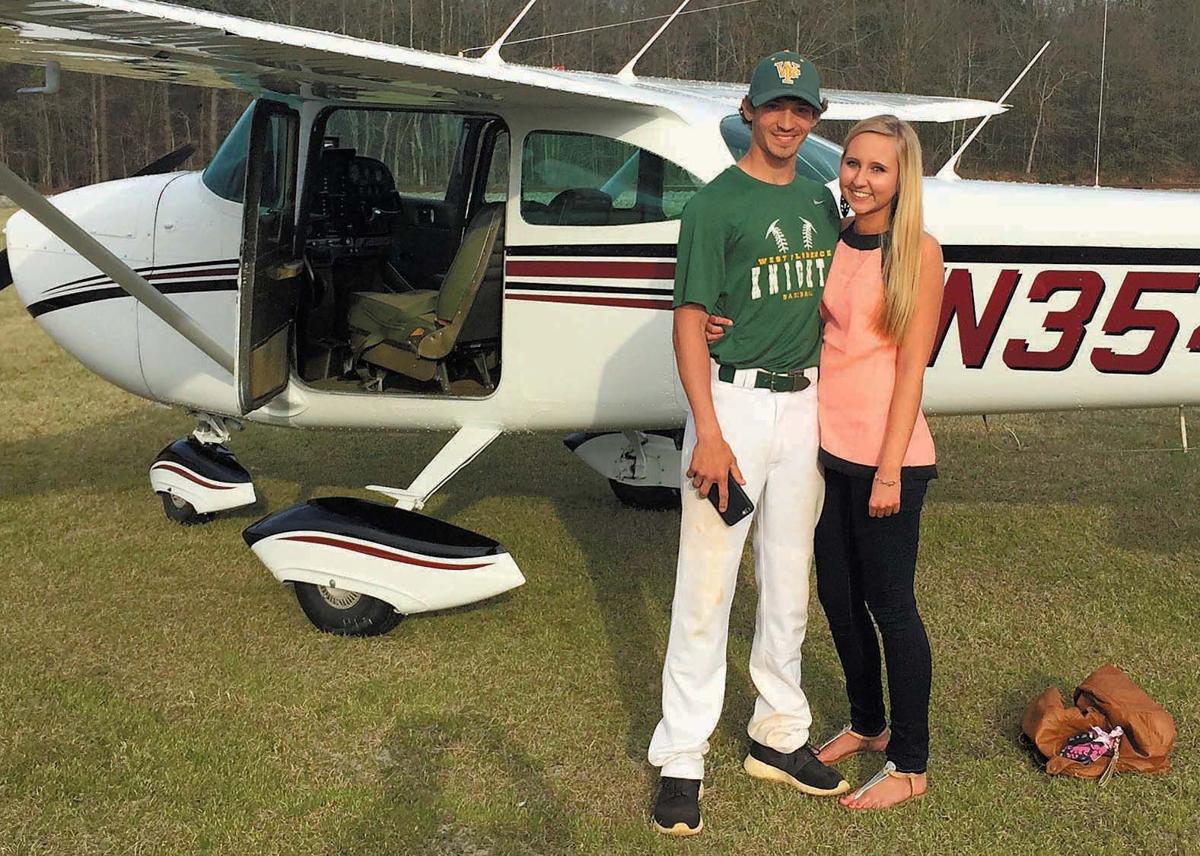 Noah Matthews and Julianne White pose for a picture in front of an airplane before pilot Frank Gleason takes them up in the air over a field in Darlington. Matthews had quite a large surprise for White -- 'PROM?' at roughly 150 yards tall was plowed across the field.

From 28,000 feet above the ground, he could clearly see: “PROM?” plowed into a field just off South Charleston Road as he flew over Darlington.

“Did she say yes?” King said he wondered.

“I did,” said Julianne White, a sophomore at West Florence High School.

It is her boyfriend of seven months, Noah Matthews, a junior at West Florence, who went above and beyond with his invitation to attend their school’s prom.

In recent years, high school students across the country have gotten creative with ways to pop the question about the prom, dubbing them “promposals.”

“I just wanted to be really unique about it,” Matthews said. “I asked my dad if we could do it, and he said he would make it happen.”

It took the help of more than a few people to get White’s promposal off the ground.

“I thought he was crazy,” Howard said.

Howard first had to get the permission of Dargan Turf Farms, which rents the property.

It took all day to plow the letters, Noah Matthews said.

His mother, Carla Matthews, asked Franklin Gleason, a friend from work who is a pilot, to fly the teen couple over the freshly plowed field one afternoon.

“I told her I had a present for her,” Noah Matthews said. He told her they had to fly to her gift.

“She was kind of weirded out,” he said.

The five-minute flight to the field put White on cloud nine.

“I told her to look down,” Matthews said. “Her jaw dropped. She was really excited about it.”

While some high school students are saving hundreds of dollars to pay for the ultimate way to ask a date to the prom, Matthews’ way wasn’t quite so expensive.

“We didn’t spend any money, actually,” he said, thanks to everyone’s help.

“I was so surprised,” White said. “I had no idea where we were going. It was a shock.”

White said she is pretty certain her promposal tops all others at West Florence High School this year. She said her friends couldn’t believe it.

Matthews has one problem.

“I’m not real sure how I am going to top it next year,” he said.

Watch Now: Should my kid get the COVID vaccine?

FLORENCE, S.C. – An enrollment decline of 118 students could cost Florence One Schools an additional $800,000 in state funds.

FLORENCE, S.C. -- Investigators are asking for the public's assistance to identify a two people involved in the theft of a box utility trainer from the Palmetto Street Church of God's parking lot.

FLORENCE, S.C. – The Florence Branch of the NAACP is asking the Florence One Schools Board of Trustees to vote against the district's proposed…

FLORENCE, S.C. -- The 38th Annual Florence Lions Club Toy Run motorcycle ride Sunday wound its way through Florence about 300 riders and six minutes long -- all for a good cause.

FLORENCE, S.C. -- The instance of AIDS and HIV is on the increase in the Pee Dee and the fight against the disease is far from over.

FLORENCE, S.C. — There was a celebration Monday afternoon at Delmae Heights Elementary School as staff received the news they had all hoped fo…

FLORENCE, S.C. -- Florence Police are asking for the public's assistance in the investigation of a Friday afternoon shooting.

FLORENCE, S.C. – The 36th annual Light for Someone You Love tree-lighting ceremony at McLeod Regional Medical Center was filled with stories a…

Noah Matthew's "promposal" to Julianne White is plowed into a field in Darlington. At roughly 150 yards tall, the message can be seen from 28,000 feet in the air.

Noah Matthews and Julianne White pose for a picture in front of an airplane before pilot Frank Gleason takes them up in the air over a field in Darlington. Matthews had quite a large surprise for White -- 'PROM?' at roughly 150 yards tall was plowed across the field.