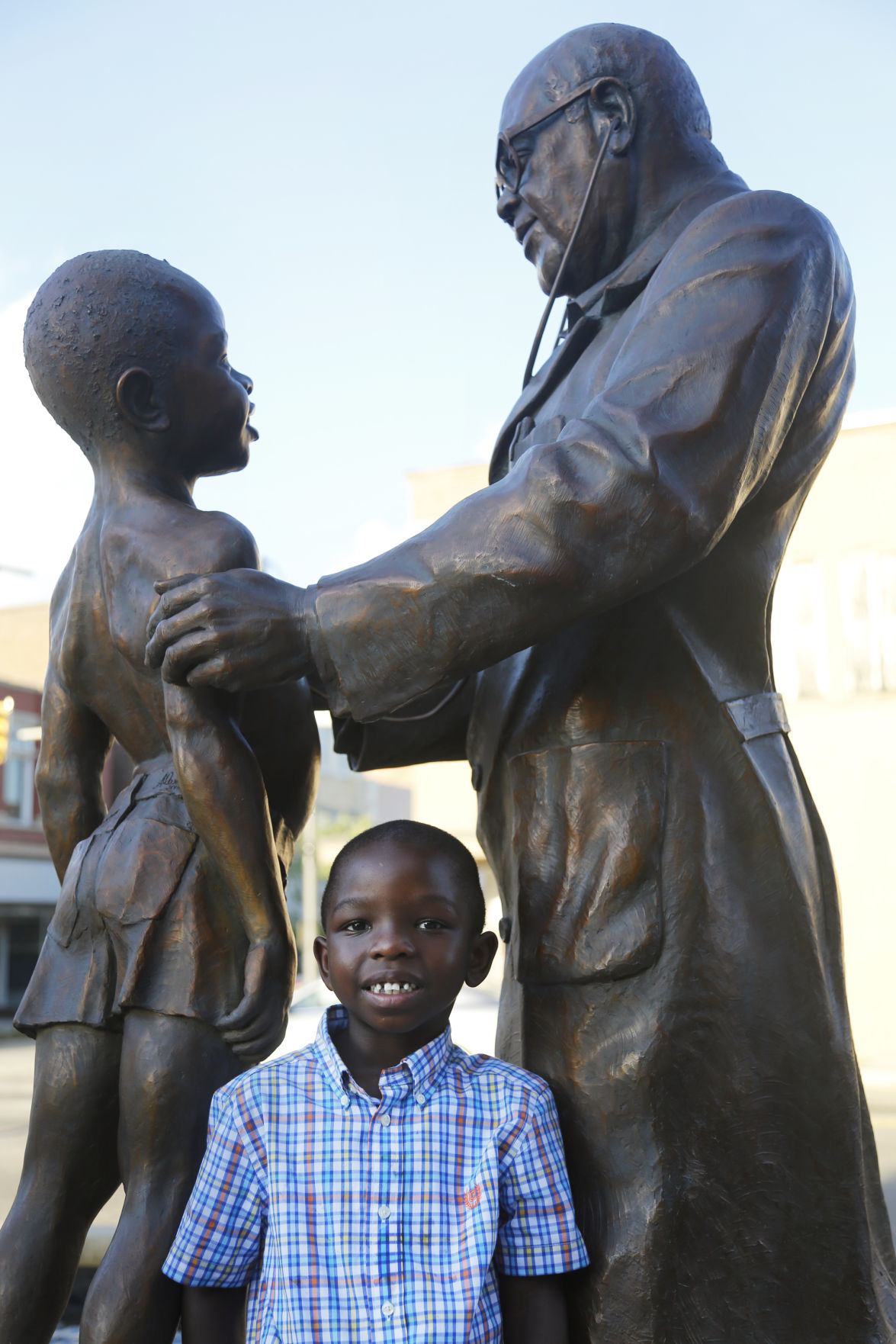 Caleb Johnson poses for a portrait in front of the statue of himself and Dr. R.N. Beck in front of the FMU Luther F. Carter Center for Health Sciences in downtown Florence. 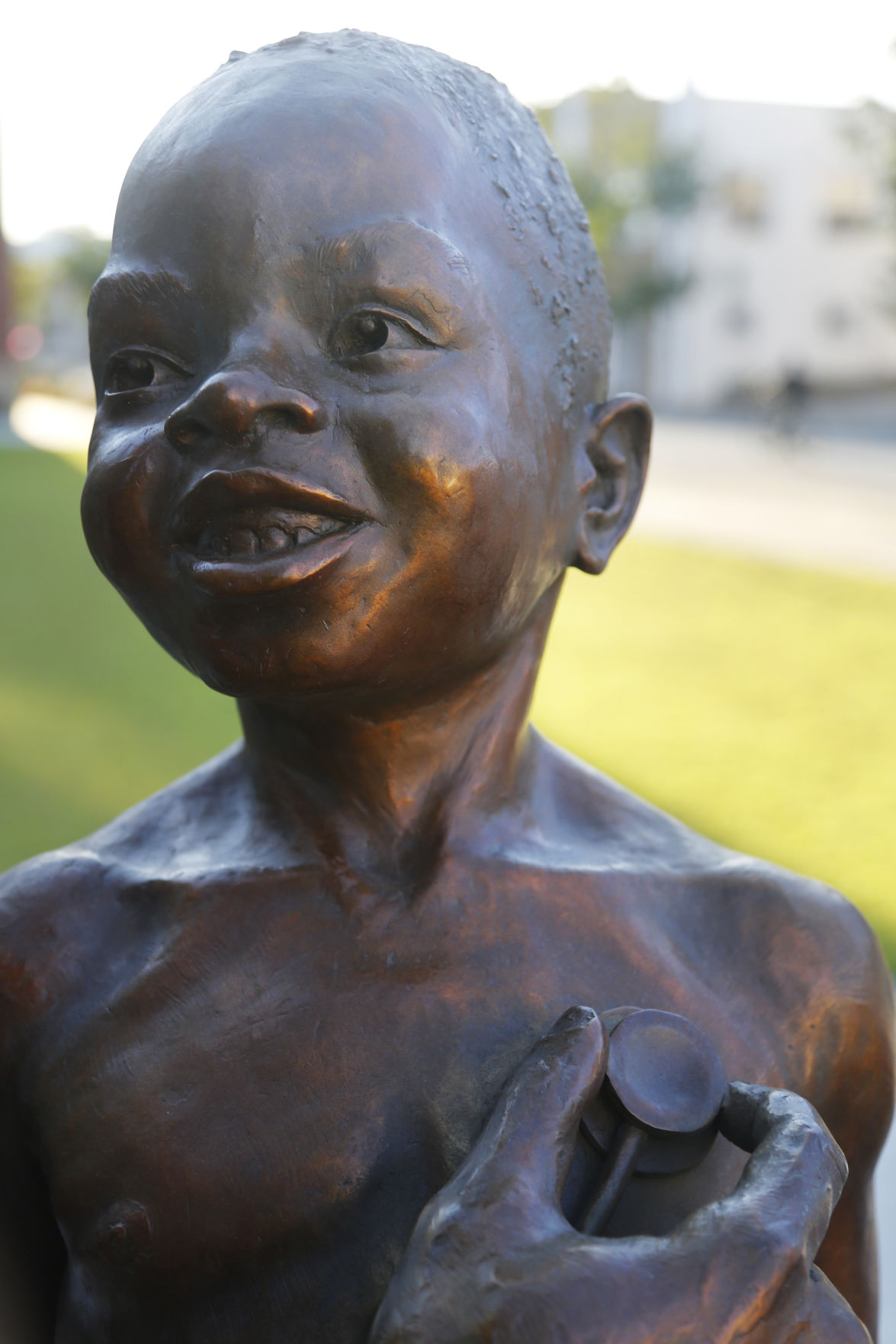 BY MEGAN MAY Morning News

FLORENCE, S.C. – Even if Caleb Johnson moves away from Florence, a part of him will always be here.

Caleb modeled for Alex Palkovich, a local sculptor, for the bronze statue of Dr. R.N. Beck and a young patient that stands outside the Francis Marion University Luther F. Carter Center for Health Sciences.

In July of 2015, Palkovich was searching for a young boy to model for the piece. He had found multiple prospects, but none particularly stuck out to him. Then he met 6-year-old Caleb Johnson.

“I saw many very nice figures, but they were all kind of standard. He was so unique,” Palkovich said. “He just put his tummy forward and he chest up and I saw his fantastic face. … He was such a character.”

Palkovich said that over the course of two months, he and Caleb held studio sessions. Caleb would either stand and model or Palkovich would take photos to use when making the clay version of the sculpture. Caleb’s mother, Chrystal Johnson, said throughout the process it didn’t really hit her that her son was being made into a public sculpture.

Johnson says the opportunity has allowed her to teach Caleb a little about the history of Florence and Dr. Beck’s important role in the community. Caleb also talked to his grandmother, who was one of Dr. Beck's patients.

Beck was the first black physician to have admittance privileges to a white hospital. He was known to treat everyone, even if they didn’t have the means to pay. He was also a civil rights advocate and was heavily involved in community service.

“I think he (Caleb) understands the meaning of the sculpture and what Dr. Beck did for people and how that correlates to the building,” Chrystal Johnson said.

Although Caleb is still very young, this experience has influenced his career goals for later in life.

“I want to be a doctor,” he said while sitting next to the statue. “I want to save people’s lives.”

FLORENCE, S.C. – A new shop will open soon at Magnolia Mall. Style It Williams’ planned opening is May 1 in the location previously occupied by Victoria's Secret.

FLORENCE, S.C. -- An eastern Florence County man is being treated for burns following a Saturday morning incident during which he was set alight.

Pedestrian struck, killed walking on US 52 in Effingham

EFFINGHAM, S.C. -- A pedestrian was struck and killed while walking on US 52 Sunday.

Bryan Braddock: I'm not going to let another face mask ordinance be pushed through the Florence City Council

FLORENCE, S.C. — The Florence County Sheriff’s Office and the Florence Police Department are preparing to tackle crime in the area of the Inte…

COLUMBIA, S.C. — Since the beginning of the COVID-19 pandemic, young adult deaths have been rare.

Building at Lynches River County Park shut down due to bats

FLORENCE, S.C. – COVID-19 isn’t the only thing shutting down buildings in Florence County. Bats are too. Florence County Councilman Kent Caudle told the county council Thursday morning that the Environmental Discovery Center at Lynches River County Park has been shutdown due to bats.

FLORENCE — Kelvia Baccus started out cleaning houses as a military wife. Now she runs her own business.

'Exemplary teacher:' All Saints teacher selected as lower school teacher of the year

FLORENCE, S.C. – For the second time in four years, an All Saints Episcopal Day School teacher has been recognized by the South Carolina Independent School Association. The school announced Friday morning that 4K teacher Monica Moeckel has been named the 2021 SCISA Lower School Teacher of the Year.

Caleb Johnson poses for a portrait in front of the statue of himself and Dr. R.N. Beck in front of the FMU Luther F. Carter Center for Health Sciences in downtown Florence.