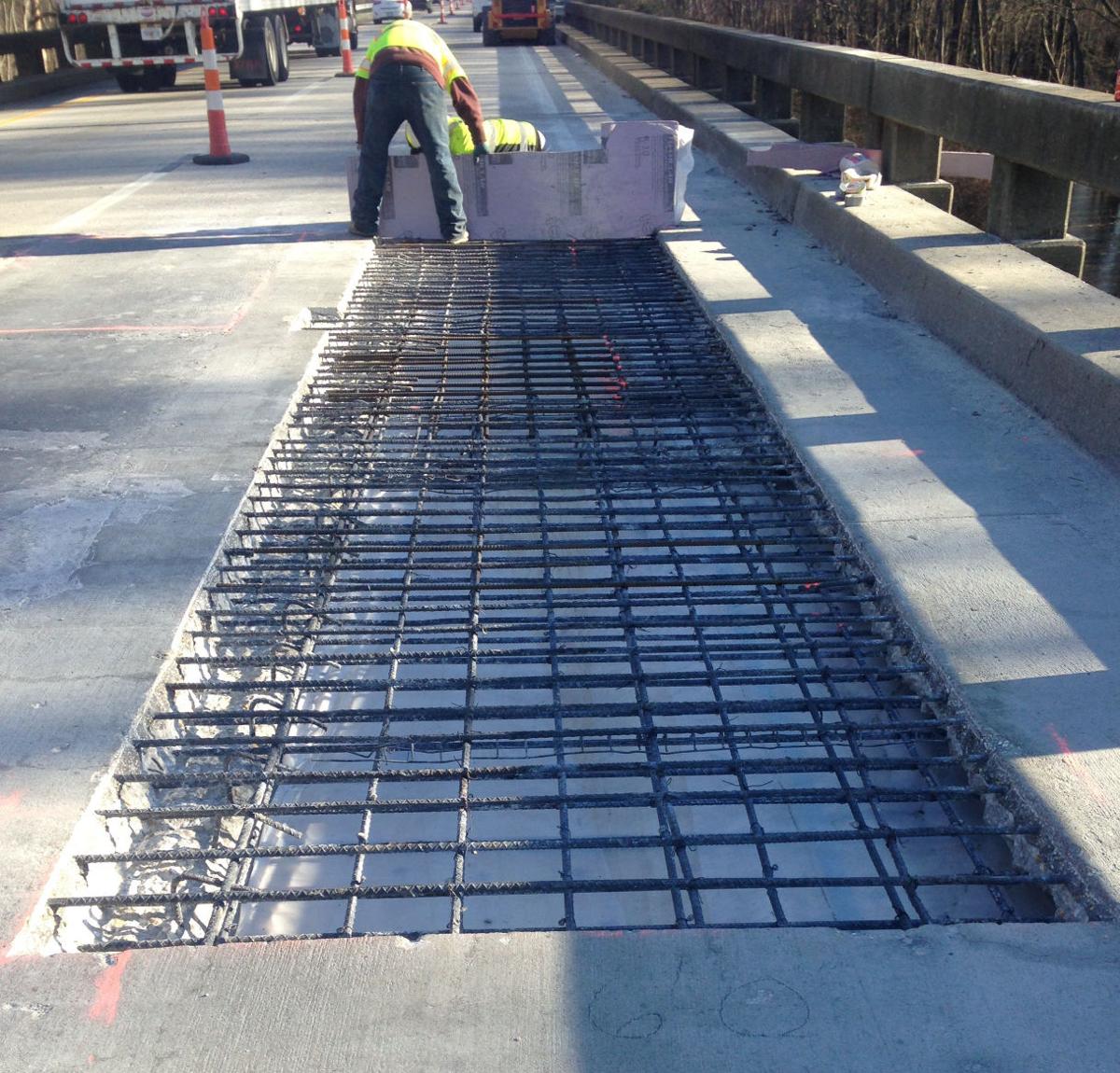 A section in the I-95 Northbound right lane at the Great Pee Dee River bridge is closed for repairs in January, 2015. The bridge is set for further closures as DOT crews work to repair the deck. 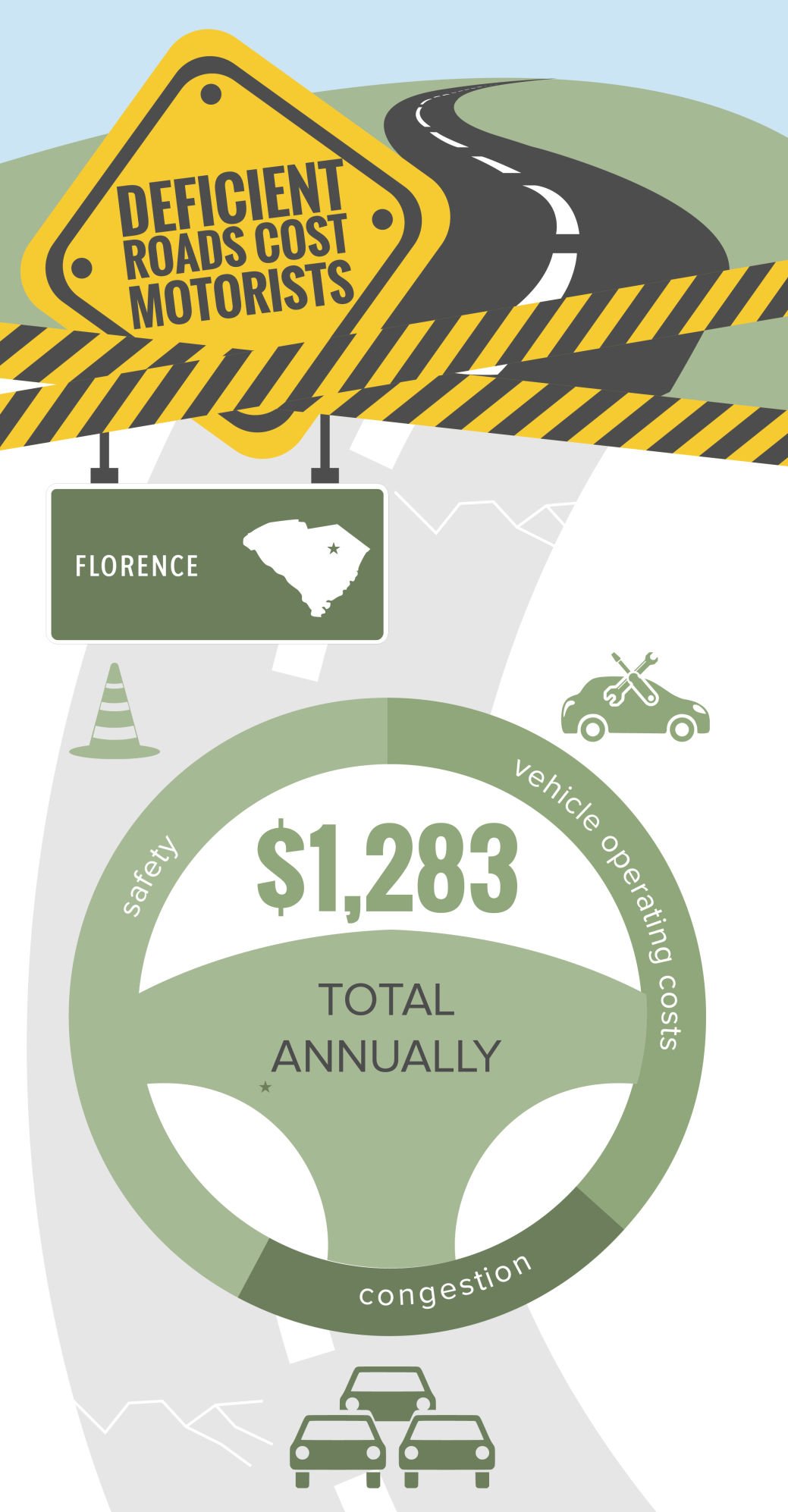 FLORENCE, SC – Roads and bridges that are deteriorated, congested or lack some desirable safety features cost South Carolina motorists a total of $5.4 billion statewide annually - $1,283 per driver in the Florence urban area - due to higher vehicle operating costs, traffic crashes and congestion-related delays.

The TRIP report, “South Carolina Transportation by the Numbers: Meeting the State’s Need for Safe, Smooth and Efficient Mobility,” finds that throughout South Carolina, two-thirds of major, locally and state-maintained urban roads are in poor or mediocre condition, ten percent of locally and state-maintained bridges are structurally deficient and the state has the highest rate of fatal traffic crashes in the nation. The state’s major urban roads are becoming increasingly congested, with vehicle travel in South Carolina increasing 10 percent in the last three years.

Driving on Florence area roads costs the average driver $1,283 per year in the form of extra vehicle operating costs (VOC) as a result of driving on roads in need of repair, lost time and fuel due to congestion-related delays, and the costs of traffic crashes in which roadway features likely were a contributing factor. The TRIP report calculates the cost to motorists of insufficient roads in the Charleston, Columbia, Florence, Greenville-Spartanburg-Anderson and Myrtle Beach urban areas. A breakdown of the costs per motorist in each area along with a statewide total is below.

The TRIP report finds that 53 percent of major locally and state-maintained roads in the Florence urban area are in poor or mediocre condition, costing the average motorist an additional $472 each year in extra vehicle operating costs, including accelerated vehicle depreciation, additional repair costs, and increased fuel consumption and tire wear.

“South Carolina has so much going for it today,” said Michael Miller, president of the Greater Florence Chamber of Commerce. “It would be a shame to imperil our bright future by not acting on a solution for our dangerous and crumbling roads. Our legislators know we have a grave problem. It’s beyond time to be responsible and agree on a sensible plan to resolve our aging infrastructure. It has already cost our businesses too much productivity and many of our citizens their lives.”

The South Carolina Department of Transportation currently spends $415 million annually on road and highway pavement repairs and reconstruction. This represents less than half (46 percent) of the $900 million needed annually to significantly improve the state’s major roads and highways.

“This is the year to finish the job on roads. The business community has long known the cost of losing when it comes to efforts to invest in our roads and bridges,” said Ted Pitts, president of the South Carolina Chamber of Commerce. “We will continue working with members of the General Assembly to give the people of South Carolina what they want and deserve: a long-term investment in our infrastructure, which is a long-term investment in our future.”

Traffic congestion in the Florence area is worsening, causing 11 annual hours of delay for the average motorist and costing the average driver $272 annually in lost time and wasted fuel.

Traffic crashes in South Carolina claimed the lives of 4,406 people between 2012 and 2016. South Carolina’s overall traffic fatality rate of 1.89 fatalities per 100 million vehicle miles of travel is the highest in the nation and significantly higher than the national average of 1.13. South Carolina’s rural roads have a traffic fatality rate that is nearly four times higher than on all other roads in the state (3.82 fatalities per 100 million VMT vs. 1.03). In the Florence urban area, on average, 31 people were killed in traffic crashes in each of the last three years.

“These conditions are only going to get worse, increasing the additional costs to motorists, if greater investment is not made available at the state and local levels of government,” said Will Wilkins, TRIP’s executive director. “Without adequate funding, South Carolina’s transportation system will become increasingly deteriorated and congested, hampering economic growth, safety and quality of life.”

The cost of state roads by the numbers

A lack of adequate state and local funding has resulted in two-thirds of major urban roads and highways in South Carolina having pavement surfaces in poor or mediocre condition, providing a rough ride and costing motorists in the form of additional vehicle operating costs.  SCDOT estimates that it has less than half of the funding needed to improve the state’s major roads and highways.

Roads rated in mediocre to poor condition may show signs of deterioration, including rutting, cracks and potholes.  In some cases, these roads can be resurfaced, but often are too deteriorated and must be reconstructed.

Ten percent of locally and state-maintained bridges in South Carolina show significant deterioration. This includes all bridges that are 20 feet or more in length.

COLUMBIA, S.C. -- The South Carolina Department of Health and Environmental Control Saturday reported, as of Thursday, 4,576 new confirmed cases of the novel coronavirus COVID-19 along with 81 probable cases. The state agency also reported 52 confirmed deaths and a dozen probable deaths from the virus.

FLORENCE, S.C. -- Florence Police are asking for the public's assistance in solving the armed robbery of a pharmacy Thursday night.

A section in the I-95 Northbound right lane at the Great Pee Dee River bridge is closed for repairs in January, 2015. The bridge is set for further closures as DOT crews work to repair the deck.

A look at the costs to drivers associated with South Carolina's roads.

A look at the condition of the state's bridges

A look at the pavement conditions of the state roads.

A look at South Carolina highway fatalities and the cost to drivers.

A look at the annual cost to residents of traffic congestion on SC roads.