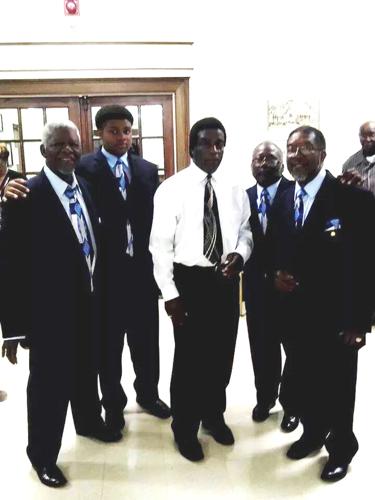 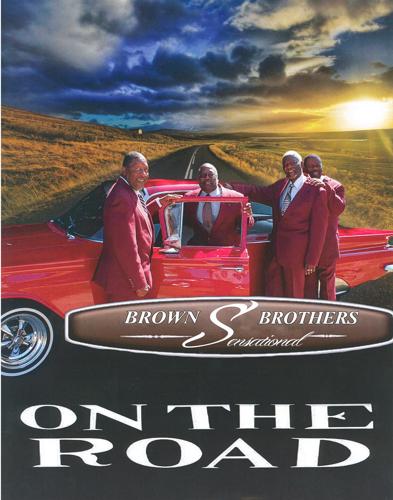 From left, Billy Brown, George Brown, Norris Brown, and Cleveland Williams have been performing across the nation as the Sensational Brown Brothers for 54 years. The group has made an impact on many lives through its gospel music ministry.

FLORENCE, S.C. – Since the 1960s, the Sensational Brown Brothers of the Savannah Grove area in Florence have been ministering all over the nation through gospel music .

Singing did not begin as a choice for the nine brothers. It was a must and something their elders insisted they do.

“We all came from the farm, and it started off with singing for Easter,” said George Brown, one of the brothers in the group. “And from that, to a nickel to a dime, we performed in front of family.”

Billy Brown, another of the five remaining brothers, said they performed once a week for their grandparents while they were still children.

The Sensational Brown Brothers came together as a group in 1960 in Washington. Until then, the brothers sang in different groups.

“At that time, there were nine brothers,” Billy Brown said . “They were singing mostly around Washington, D.C. in the Maryland-Virginia area. Some traveled from there to Pennsylvania, New Jersey, New York, and they sang there during that time until 1974.”

In 1970, the group started recording music, Billy Brown said. Around 1974, the brothers moved home to Florence.

“We’ve probably recorded better than 100 songs over the 54 years we’ve been singing,” George Brown said . “We’ve recorded back when there were LPs and 45s, and the 8-track tapes. From there , we had cassettes, and we did videos.”

George Brown said the first national label the group signed with was Malaco Records out of Jackson, Miss. Since then, they have worked with other Southern record labels.

Life experiences are the inspiration behind most of the group’s music.

Over the years, the brothers have worked with notable groups and artists such as the Dixie Hummingbirds, James Cleveland, the Mighty Clouds of Joy and Shirley Caesar.

“You name it, we’ve been there with them,” Billy Brown said. “We did tours in California, all over the East Coast, Milwaukee and St. Louis.”

Billy Brown said the group has recorded music that people have labeled as hits such as “Jacob’s Ladder,” “I tried Jesus,” and “When the Roll is Called.”

George Brown said the group tried to tour only on the East Coast, but sometimes they had to go out west.

“One time we went out there, it was about three or four weeks before we got back home,” George Brown said. “We’ve all gotten old now. We don’t do that anymore.”

Due to age, George Brown said the group tries to work only on weekends now. However, years ago, they would work anytime, and the nine brothers did all of the driving, played all of the music and were responsible for setups for their performances.

They have performed in auditoriums, civic centers, schools, outside venues and churches.

George Brown said he remembers when the group would travel during the ’ 70s and was not able to stay in certain places.

“We had to find places to stay, because we weren’t welcomed in lots of places like Alabama and Georgia,” he said. “We had to make some adjustments to how we would operate during that time.”

He also recalls a time when the group had to sleep at a rest area, because they could not get gas from a certain gas station in order to finish their trip.

“We didn’t have enough gas to go all night, so we had to spend the night in the rest area so we could wait until the regular gas stations opened up during the day. But things have really changed.”

He said it is a blessing that things have changed some.

Age has changed the group.

“We got old, and we started hiring people to do things that we aren’t able to do now,” George Brown said. “We have a six-member band.”

In addition to adding a band, the Sensational Brown Brothers have added other members to sing with them. The brother’s cousin Cleveland Williams now performs with them, as well as Brandon Brown, a freshman at West Florence High School. They also have a road manager now, and a bus driver who takes the group from place to place.

On the second Thursday of every month, the group performs for the residents at Commander’s Nursing Center in Florence.

“And they will be waiting for us to walk through the door,” Billy Brown said. “And I think it does us more good than it does them, because I look around at those fellows singing without any music. Water be coming out of their eyes.”

Billy Brown said it is joyful to see the residents enjoy the message that they sing.

With their music ministry, the Sensational Brown Brothers have touched many lives.

“We had men that have come up and say how over the years, they’ve changed their life because of our singing ministry,” George Brown said. “That makes us feel real good. I guess that has something to do with our driving factor that kept us going through these years.”

Three people in particular have entered into the Christian ministry because of the Brown brother’s music throughout the state, Billy Brown said.

For people such as Terry James, he grew up knowing the Sensational Brown Brothers. James grew up in church. His grandfather was a Baptist preacher.

“Back then, there were a lot of black groups out in this area, and I’ve basically grown with them all my life,” James said. “They’re a good group. It takes a lot of endurance to hang around and sing for that long. You’ve got to be committed to gospel singing and committed to serving Christ.”

George Brown said everything the group does comes straight from the heart. Over the years, he said the group has been blessed.

“I don’t know what else we’ll do now if we quit this,” he said. “It’s gotten late in the day. We’re looking forward to trying to keep doing it for some years to come, if the Lord will give us the health and the strength. We’re going to try to make it work.”

Scientists can tell what you eat by analyzing your hair

Does having more moons in the sky mean a longer time on Earth?

Does having more moons in the sky mean a longer time on Earth?

Carbon capturing concrete could be the future of green construction

Carbon capturing concrete could be the future of green construction

From left, Billy Brown, George Brown, Norris Brown, and Cleveland Williams have been performing across the nation as the Sensational Brown Brothers for 54 years. The group has made an impact on many lives through its gospel music ministry.