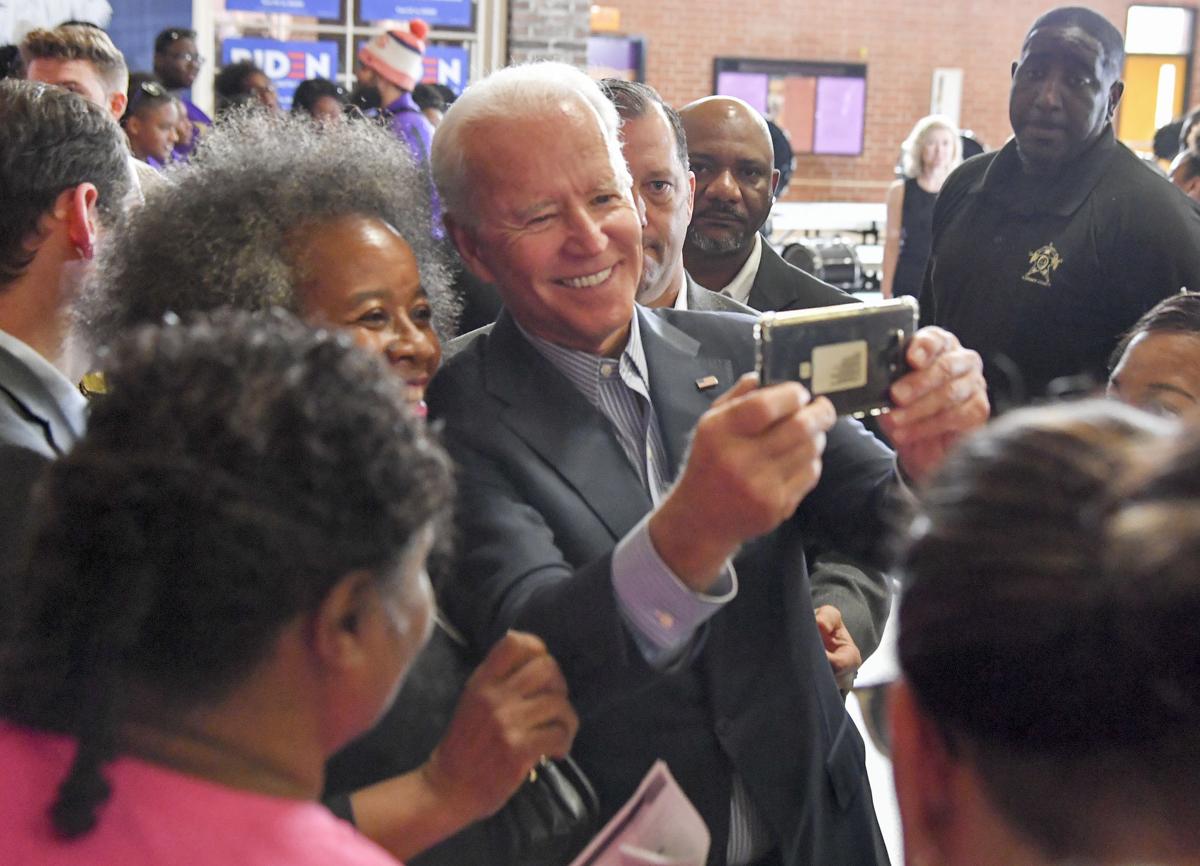 Joe Biden takes a selfie during a campaign stop at Wilson High School, on Saturday, Oct. 26, 2019, in Florence, S.C. 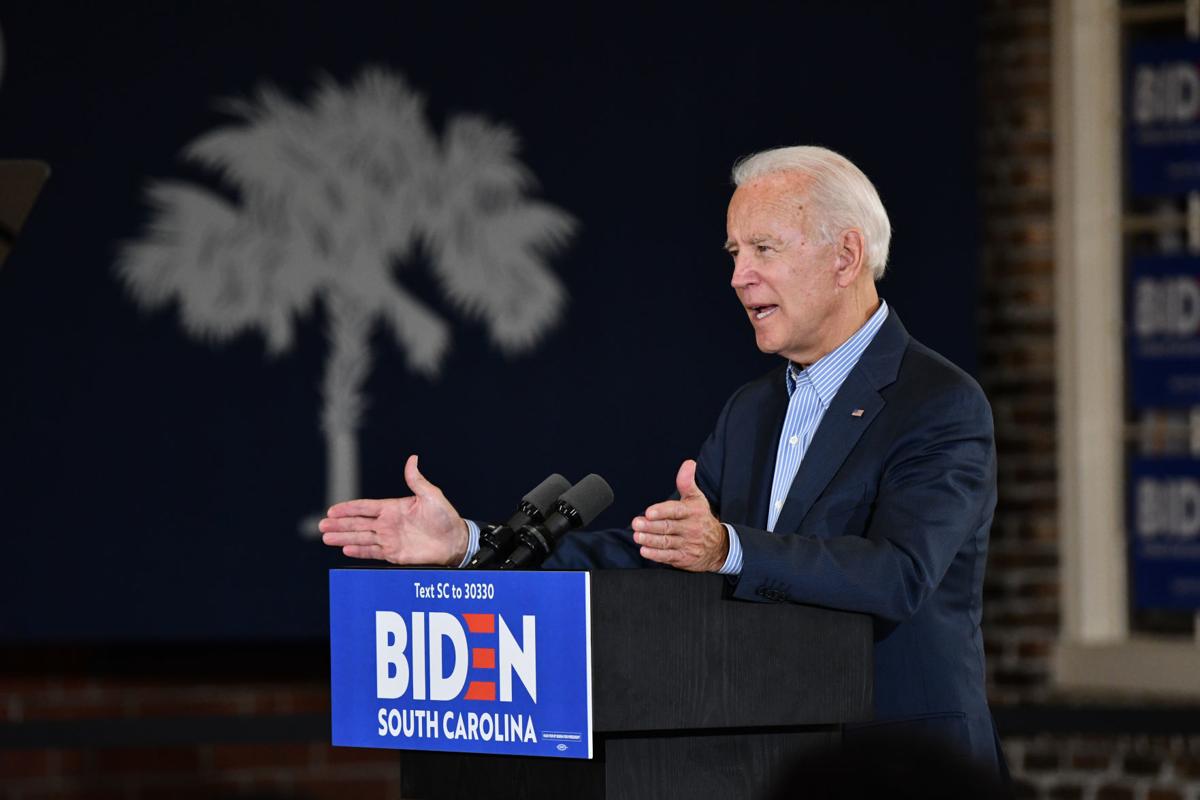 Joe Biden addresses the crowd during a campaign stop at Wilson High School on Oct. 26 in Florence.

He said the president had absolutely no sense of empathy.

“He has no idea what it’s like to figure out how to pay the rent,” Biden said.

Biden also criticized Trump’s words and actions since he was elected. He said the president’s words could lead the country down a dark path.

“The words of a president matter,” Biden said.

During the town hall, a dog barked, which led Biden to say even the dog knew about Trump.

Biden spoke for around 18 minutes to around 240 people according to an estimate made by the school’s resource officer at the town hall.

Biden said the 2020 election was a battle for the soul of America to determine whether the country is going to try to live up to the ideals held out in its founding documents.

He also referenced the “original sin of slavery” during his speech in the context of America trying to live up to the ideals enshrined in its founding documents.

Prior to the town hall, Biden said the Palmetto State reminded him of his home in Delaware.

“Everybody thinks that Delaware is a big northeastern state,” Biden said. “Well, Delaware is a border state. We have the eighth-largest African American population in the country. Physically, the southern two-thirds of my state are agriculture and rural.”

Most of Delaware, save for a small portion around Wilmington that was added to the state when the Mason-Dixon line was created, lies on the Delmarva peninsula.

The Delmarva peninsula is so named because it is the location of parts of Delaware, Maryland, and Virginia.

“All the problems that exist in the Pee Dee exist at home as well as Columbia is not a whole different — it’s just bigger than Wilmington, Delaware,” Biden said.

Biden added that he had been visiting the state for years with Gov. Richard “Dick” Riley, Mayor Joe Riley of Charleston, and Sen. Fritz Hollings.

He later said he remembered coming to the state as he was helping get money to dredge the port of Charleston.

“They face different problems than the rest of the state faces,” Biden said. “You’re like the southern part of my state where we need more infrastructure down here. You need to be in a position where you deal with the impacts of global warming.”

He said the region needed to spend money on broadband internet access, increase the road infrastructure, and deal with polluted water.

In his previous trips to the Pee Dee region, Biden said, he had discussed the need for improving education, health care, and the environment.

He said he had been calling for increasing the funding for Title I schools, which would help rural areas by allowing those districts to attract teachers and fund pre-K programs for three and four year olds.

Biden also referenced the Corridor of Shame, a nickname for the educational system of the Pee Dee region. He referred to the area as the Road of Shame in his interview and during his speech.

Biden said one of the things he was most proud of was getting the Affordable Care Act passed.

“Trump is trying to end it,” Biden said. “Trying to rip it apart. Trying to take away the coverage for pre-existing conditions.”

Biden was played onto the stage by the Wilson High School drum line.

This was the second time he visited the Pee Dee and spoke after being played on by the Wilson band. He also did so at the Galivants Ferry Stump.

Williams announced his endorsement of Biden in early September.

Biden served as vice president from 2009 to 2017 under Barack Obama.

Prior to being elected to the role, Biden served as a U.S. senator from Delaware from 1973 to 2009. A native of Scranton, Penn., Biden moved with his family to the First State at age 10. He passed the bar in 1969 and became a member of the New Castle County Council in 1970, serving in that role until he was elected to the Senate.

Biden attended the University of Delaware — he double majored in history and political science — and the Syracuse University College of Law.

FLORENCE, S.C. — A portion of a campaign speech made by Democratic presidential nominee at Wilson High School has been thrust into the national spotlight. Biden spoke at a town hall event at the school on Saturday, Oct. 26, 2019.

Joe Biden takes a selfie during a campaign stop at Wilson High School, on Saturday, Oct. 26, 2019, in Florence, S.C.

Joe Biden addresses the crowd during a campaign stop at Wilson High School on Oct. 26 in Florence.