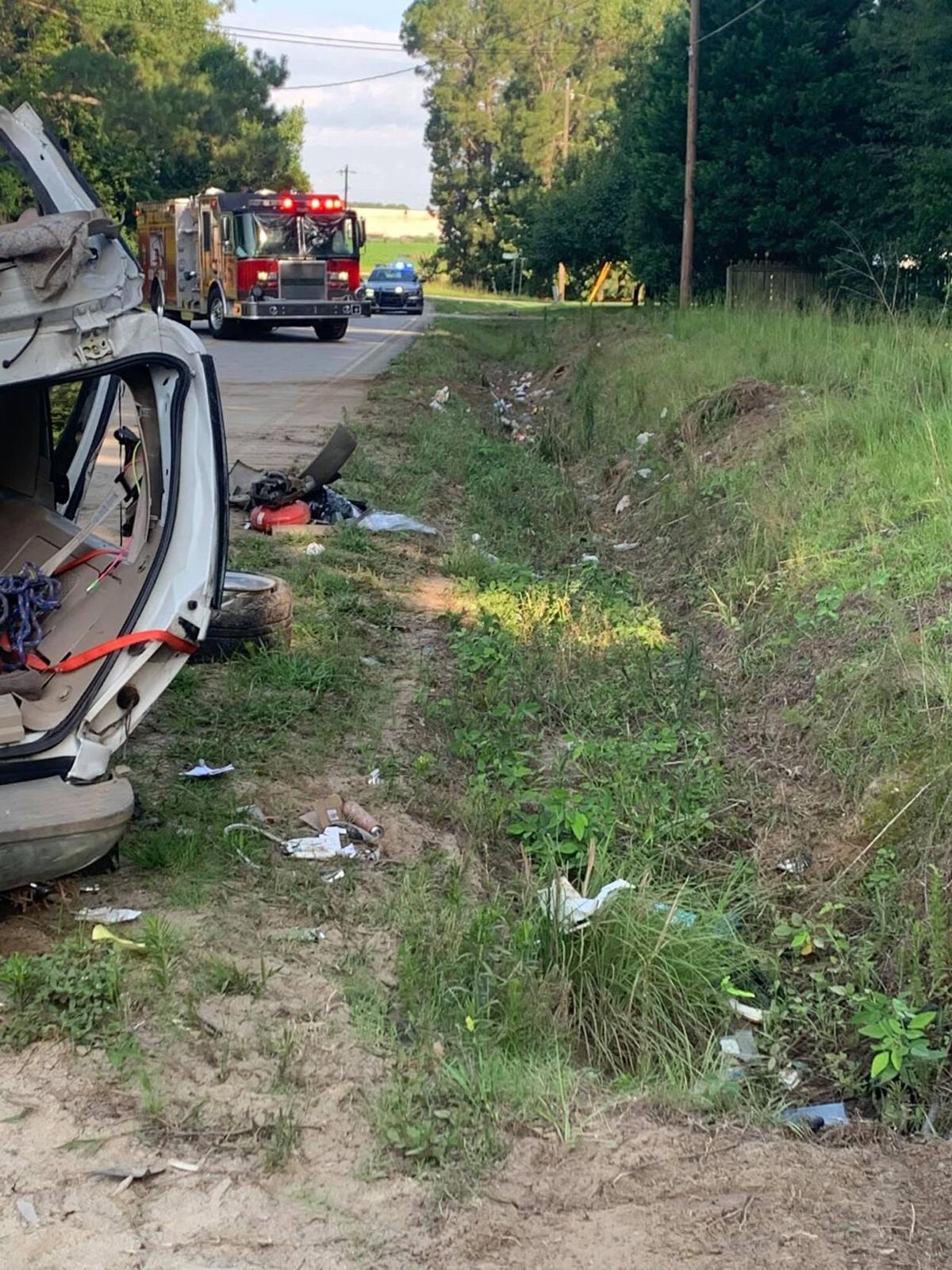 A car sped through a National Cemetery Road crash scene Sunday morning and collided with the wrecked car (left). Firefighters were trying to extricate the driver from the car that wrecked first. The speeding car came to rest approximately 200 yards past the other end of the crash scene, said Windy Hill Fire Chief John DeLung. 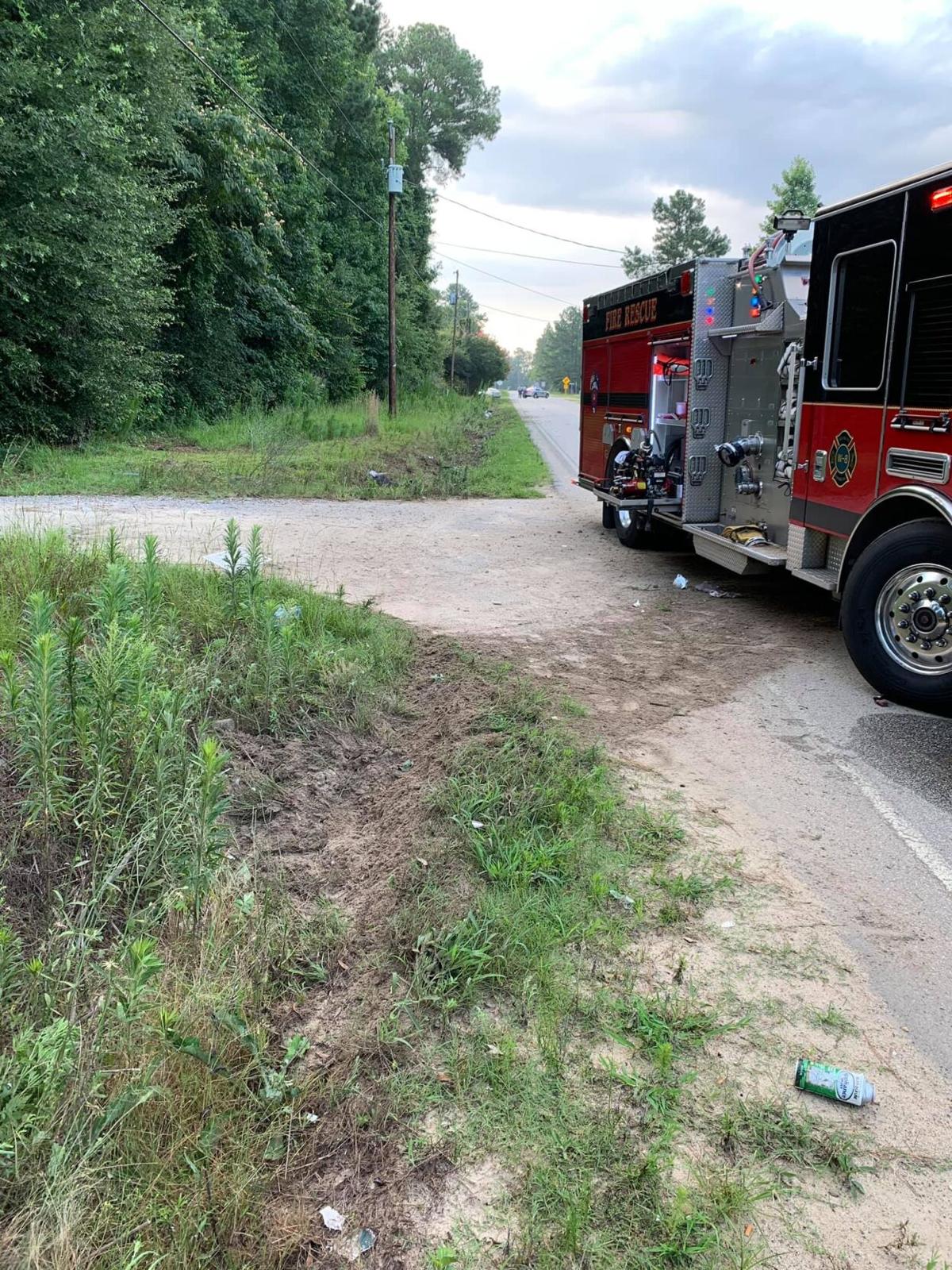 The car that sped Sunday morning through a National Cemetery Road crash scene can be seen up the road and need to a S.C. Highway Patrol cruiser.

FLORENCE, S.C. − Law enforcement officers are searching for the driver of a car that tried to go through a crash scene in excess of 100 miles an hour.

Windy Hill firefighters were working a crash with extrication on the 3500 block of National Cemetery Road Sunday morning when South Carolina Highway Patrol troopers were warned there was a car approaching the crash driving more than 130 miles an hour, said Windy Hill Fire Chief John DeLung.

Firefighters had the road closed so they could work safely and had it blocked with fire engines at both ends of the incident. In addition to the protection offered firefighters from the weight of the trucks, each engine had 1,000 gallons of water on board.

DeLung said the firefighters were cutting on the car at the time, trying to free the trapped driver, and had to back away from the car for safety reasons.

“A firetruck was blocking the road, the car ran up into the grass. It actually hit the car we were cutting on with the patient still inside and came to rest 200 feet past our secondary truck, the one blocking the other side of the road,” DeLung said.

Though the speeding car hit the crashed car, it missed the fire engines but did manage to spray debris on them as it ran through in the grass and ditch.

The vehicle came to rest approximately 200 yards from the engine on the far side of the crash, DeLung said.

The driver was able to get out of the vehicle and run before troopers could get to him.

DeLung said his crew got back to extricating the driver from the original crash while troopers with assistance from Florence Police officers and Florence County Sheriff’s deputies conducted a manhunt.

“This just shows us the importance of shutting a road down for emergency workers. There were at least 10 people working the incident,” the fire department wrote on its Facebook page. “Some people may not like it, but we will shut it down. EVERYONE GOES HOME!!!”

Anyone with knowledge or information about the second crash is asked to contact sheriff’s office investigators at 843-665-2121, ext. 374. You can also leave information on the agency’s free app for iPhone or Android devices or Crime Stoppers of the Pee Dee at 1-888-CRIME-SC. You do not have to reveal your identity to leave information.

Despite COVID-19 and logistical woes, Tokyo 2020 to be the most inclusive Olympics

FLORENCE, S.C. – A six year old North Vista Elementary School student is scheduled to appear in two movies being filmed this summer. Second grader Jamier Williams and his mother, Shikari Gregg, headed to New York late last week so that Williams could appear in the first of two movies. Williams will return to the Big Apple in August to appear in the second movie.

FLORENCE, S.C. – A man was arrested and charged with attempted murder Tuesday evening after a stabbing incident in downtown Florence.

DARLINGTON, S.C. -- Two Darlington Courthouse Square businesses were destroyed and several others damaged in a Friday night fire that firefighters from two counties battled for the rest of the night and most of the morning to bring under control.

COLUMBIA, S.C. — A puppy that was brought to Florence County on July 17 tested positive for rabies on Tuesday, according to the South Carolina…

Florence seeking citizens to serve on boards, commissions and committees

DARLINGTON, S.C. – A former W. Glenn Campbell Detention Center employee is behind bars after allegedly engaging in a relationship with a female inmate. Jessica Graham, 30, of Timmonsville, was arrested Thursday by agents of the South Carolina Law Enforcement Division on a charge of misconduct in office.

A car sped through a National Cemetery Road crash scene Sunday morning and collided with the wrecked car (left). Firefighters were trying to extricate the driver from the car that wrecked first. The speeding car came to rest approximately 200 yards past the other end of the crash scene, said Windy Hill Fire Chief John DeLung.

The car that sped Sunday morning through a National Cemetery Road crash scene can be seen up the road and need to a S.C. Highway Patrol cruiser.