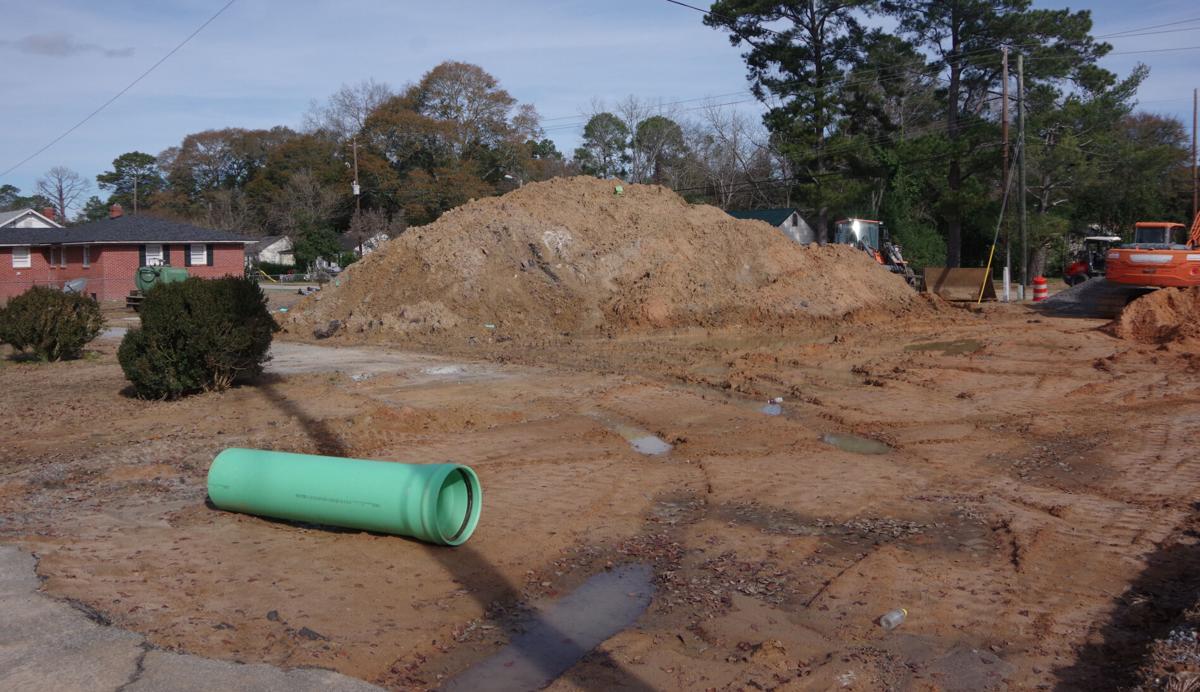 A portion of Broad Street over a recently repaired sewer line, a repair that required a 20-foot-hole, is ready for paving and reopening — as soon as the soil dries out enough. 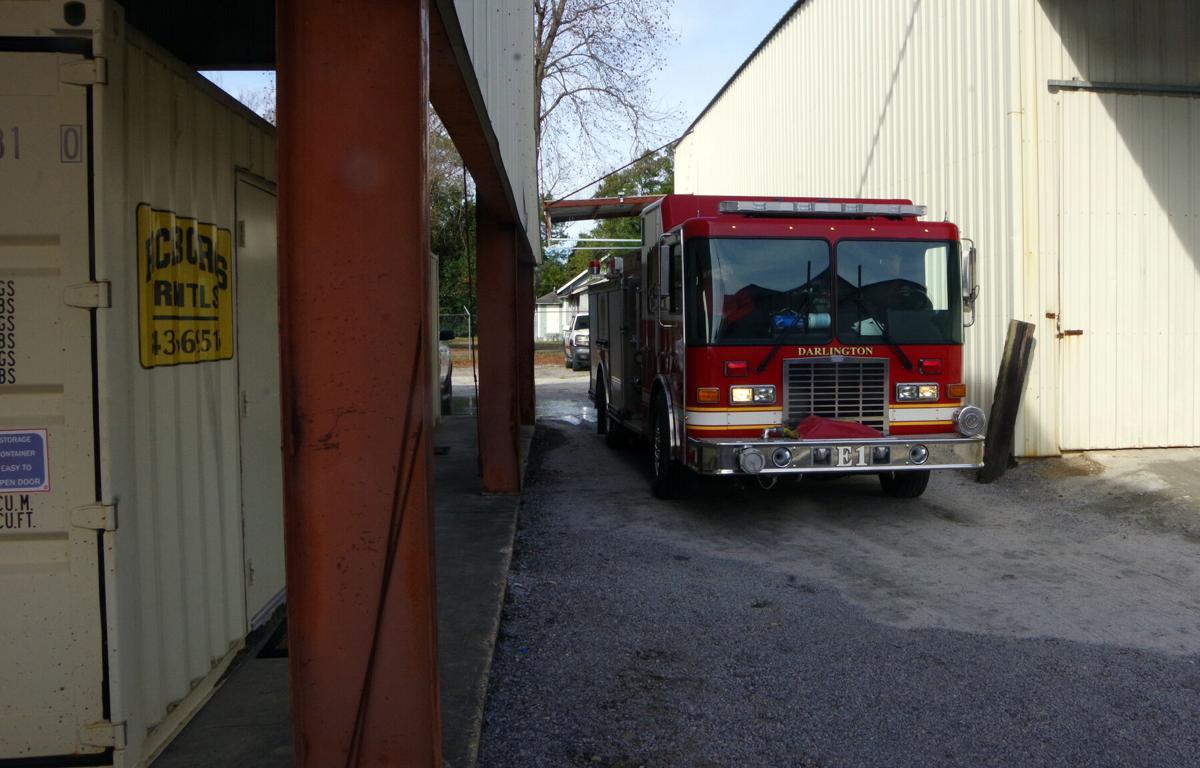 Darlington Fire Department Engine No. 1 pulls into a warehouse area that will serve as the fire station while street repairs are completed outside the current station. 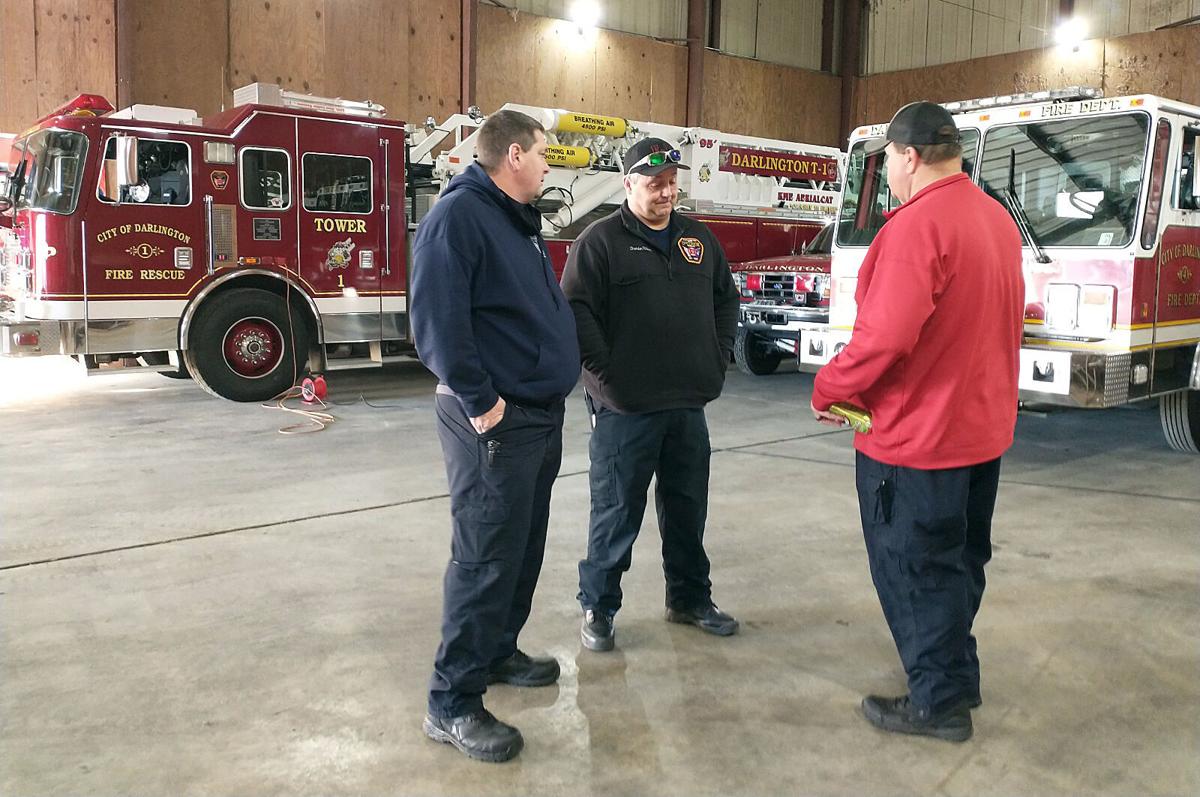 Darlington firefighters stand in a warehouse that will house  the Darlington Fire Department while street repairs are made outside the station.

DARLINGTON, S.C. — It's going to be a heavy lift — or lots of heavy lifts and a fire department relocation — but when it is finished Darlington Mayor Curtis Boyd can check a big sinkhole off his to-do list.

"It was on my to-do list since day one," Boyd said.

And while it will be an inconvenience for the city, Darlington's coffers will be none the worse for the wear.

"They're going to start at Orange Street and Wells Street and they're supposed to dig out. They're saying 85 feet but if they find more they go on out," said Boyd. "They'll tear up this intersection here that takes the water coming down from Pearl Street in terracotta pipes and they're going to put new boxes in at the bottom."

Recurring sinkholes at the intersection have been an at-least-five-year issue for the city and have damaged a fire truck and other vehicles.

The area is one of the lowest elevations in the city and serves as the fallout for several street drains, especially Pearl Street and its surrounding neighborhoods.

SCDOT crews or contractors are to replace the old pipe, install some new drainage boxes and otherwise reorder an area with pipes converging from several directions, Boyd said.

When finished, in 4-6 weeks, the city will have a brand-new, freshly paved intersection, Boyd said.

The fix, which will improve water flow, isn't expected to cause problems upstream of the sinkhole as the pipes upstream are younger and in better shape, Boyd said.

Until then the biggest inconvenience to the city will be the relocation of the fire department, which is working out of a warehouse on Broad Street — with the apparatus in the warehouse and the firefighters in two adjacent portable buildings.

City spokeswoman Lisa Rock said the move will actually improve fire department response times as it is more centrally located than the current location in the basement of Darlington City Hall.

The move to fix the intersection started five years ago when a fire truck — the sinkhole is almost right in front of Darlington Fire Department's station — was damaged by the sinkhole.

"Five years ago the city and state agreed to redo the roads and the ball got dropped. Since I've gotten on board I've pushed to get it done," Boyd said. "We were supposed to be out of pocket five years ago but we don't have to pay anything this time so we're happy for that."

The city is nearing completion of two other major public works projects — broken sewer pipes on or around Broad Street.

Boyd said paving should start as soon as the sites dry out enough. He said the streets involved should be paved and reopened by the end of the month.

The mayor has set his sights on his next project — a sinkhole on Washington Street.

"It's the matter of getting the money and the time to get it done," Boyd said.

In the long run, Boyd said, he wants the city to form a long-range plan to work on its aging infrastructure.

"All these are going to take grants," Boyd said.

WASHINGTON, D.C. — South Carolina Sen. Lindsey Graham says he respects Congressman Tom Rice but disagrees with Rice's decision to vote to impeach President Donald Trump. Graham spoke about Rice during a virtual press call for South Carolina media held Friday morning. After an opening statement, he was asked about Rice's decision by a reporter from The State.

A portion of Broad Street over a recently repaired sewer line, a repair that required a 20-foot-hole, is ready for paving and reopening — as soon as the soil dries out enough.

Darlington Fire Department Engine No. 1 pulls into a warehouse area that will serve as the fire station while street repairs are completed outside the current station.

Darlington firefighters stand in a warehouse that will house  the Darlington Fire Department while street repairs are made outside the station.