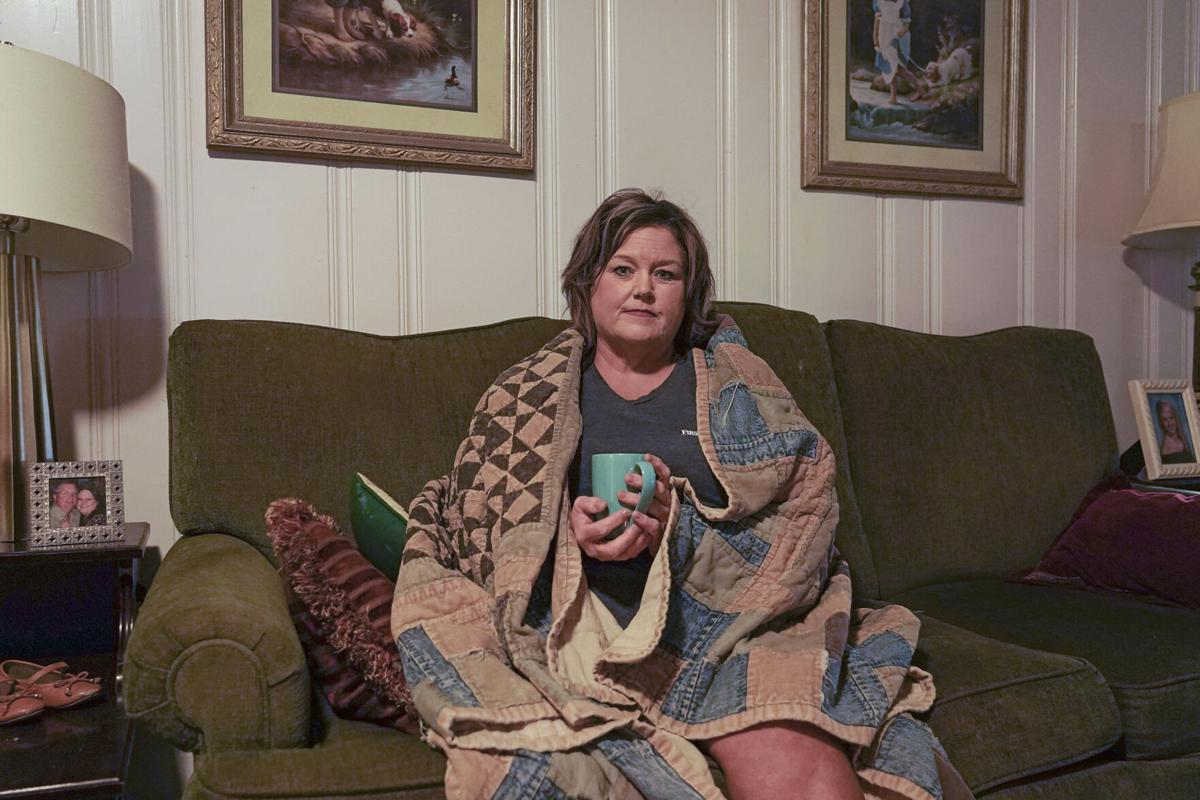 Jennifer Hunt recovers at home on July 15 in Darlington after getting COVID-19 for a second time. 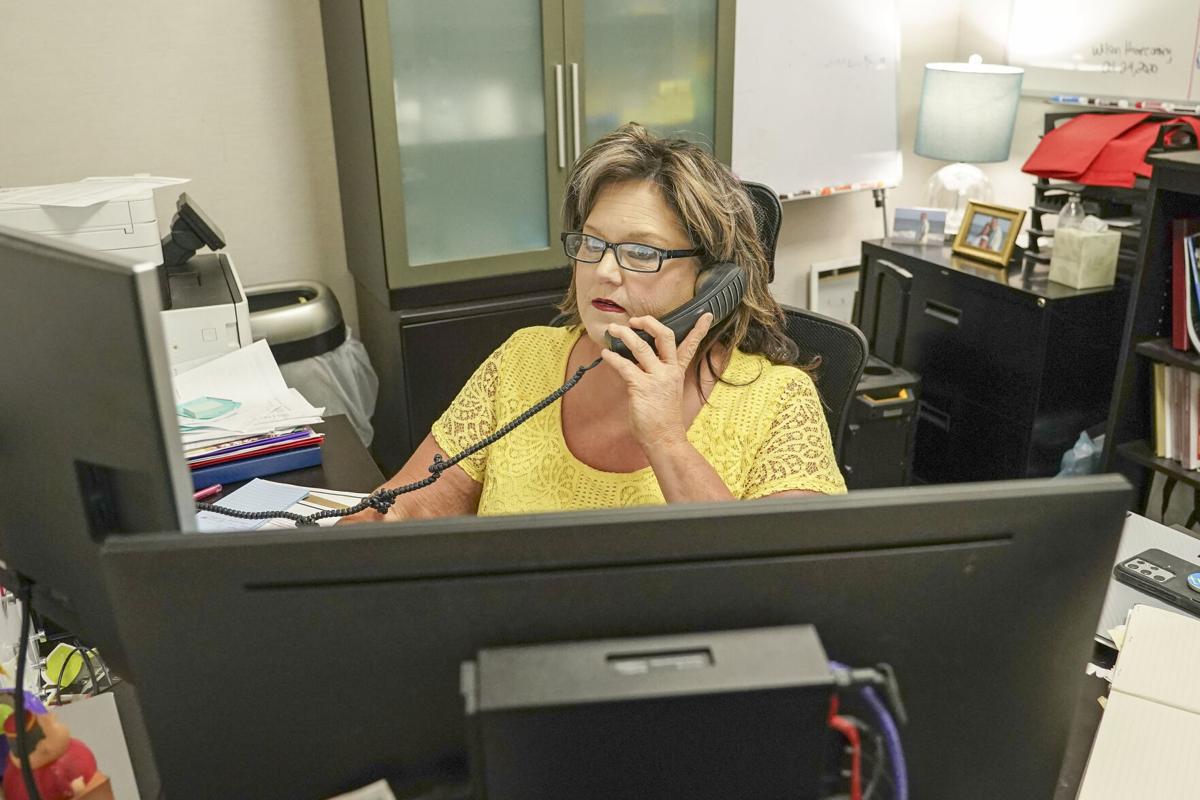 Jennifer Hunt returned to work on July 22 after recovering from her second battle with COVID-19 in Florence.

DARLINGTON, S.C. — Jennifer Hunt got COVID twice, the second time after being vaccinated.

At her home in Darlington. Hunt talked about her experience. She was in the ninth day of a 10-day quarantine for the COVID-19 virus.

“I started feeling bad last Monday,” she said. “On Tuesday, it was worse. The fatigue was so bad I couldn’t get out of bed.

“The next day I just couldn’t move. My son Dylan put me in the car and took me to the hospital.”

It was the second time Hunt was being rushed to the hospital by one of her children for an unknown illness.

Hunt is director of sales and marketing at High Rise Hotels in Florence. Her first experience with COVID-19 came in February of 2020 when as she was returning home from a business trip to Los Angeles.

“On Feb. 3rd, 2020, I went to Los Angeles for a week to attend a Hilton conference,” she said. “The company I work for owns a collection of hotels in Florence, including Hilton properties.

“Several of us were there together, so we did some evening activities as a group. On two occasions we went to Disneyland. We didn’t go into the park where the rides were; it was a nightlife area outside the park with bars and restaurants. They were always crowded.”

At this the time, Hunt said, she knew nothing of COVID-19.

Her first hint would come came as a public address announcement at the airport before her flight home.

“When we were at the airport, there were a few people wearing masks, but not a lot,” Hunt said. “These announcements kept coming over the public address system that said If you have been to China in the past 14 days, please report to a certain area. That was the only indications our world was about to change.”

This change for Hunt would come sooner than later.

On the plane ride home, Hunt started coughing and feeling bad. She attributed this to some jet lag and a long week at the conference.

By the time she landed in Charlotte, Hunt was very sick. Two days later, she was being rushed to the hospital.

“My daughter came to my house and took me to the hospital. They admitted me with double pneumonia and fluid around my heart,” Hunt said.

After some additional tests, it was determined that her heart was operating at only 25%.

An emergency heart catheterization was ordered.

Cardiac catheterization can also be used to assess the blood pressure inside the heart and to see how effectively the organ is pumping.

“When they didn’t find anything with the heart cath, the cardiologist said I must have had a virus that attacked my heart,” Hunt said.

After five days in the hospital, Hunt was sent home. She was fitted with an external defibrillator and prescribed a cocktail of medicines to strengthen her heart.

But Hunt’s mystery illness wasn’t finished with her.

“ About three days after I left the hospital, I started getting shingles,” Hunt said. “I’ve never had shingles before. It was awful. They were all over my face and my head. It lasted about a month and a half.”

“About three months later,” Hunt said, “I had some routine blood work done. It was discovered I had COVID-19 antibodies in my bloodstream. My doctor concluded that my previous stay in the hospital was COVID-19 related, and that, in fact, it was COVID-19 that had attacked my heart and weakened it.”

“I knew nothing about it at all,” she said.

For the next year, the world did, in fact, change because of COVID-19.

On May 15, 2020, President Donald Trump announced Operation Warp Speed, a public-private partnership initiated by the United States government to facilitate and accelerate the development, manufacturing and distribution of COVID-19 vaccines. Eight companies were chosen for funding of approximately $11 billion dollars to expedite development and preparation for manufacturing their respective vaccine candidates. Three companies, Johnson & Johnson, Moderna and Pfizer, have started distributing vaccines.

“When I first heard about the vaccines, I wasn’t worried about taking it or not, because I had some natural immunity,” Hunt said.

The antibodies found earlier in Hunt’s blood test are proteins made by her immune system. These proteins fight infections such as viruses and help ward off future occurrences by those same infections.

It is unknown how long these proteins stay in the blood.

As access to the vaccines came closer, Hunt decided to consult with her doctor.

“At that time, her stance was we don’t know enough about COVID to understand what kind of natural immunity you have, how much it will protect you or how long it will last,” Hunt said. “There were so many unanswered questions that she would not direct me in one way or the other.

“With things starting to open up, it was becoming more evident that people were going to be more comfortable knowing others around them were vaccinated. In my line of business, I need my clients to feel comfortable doing business with me, talking to me and meeting with me.”

Hunt decided to get the vaccine.

She chose Pfizer, which required two doses at least three weeks apart. Her first shot was March 24, and her second was on April 23, 2020.

“The first shot made me feel sickish and a little drained, like I had a bad cold,” Hunt said. “Then, a few days later, I got another case of shingles.”

Shingles is caused by the same virus that causes chickenpox, also known as the varicella zoster virus. After a person has chickenpox, the virus stays in the body and becomes inactive. Years later, the virus can reactivate, causing shingles (also known as herpes zoster.)

Scientists don’t know exactly what causes the virus to reactivate, but there may be multiple factors. As a person ages, the immune system begins to weaken and is less likely to prevent the virus from reactivating. People with weakened immune systems are more likely to get shingles.

“It wasn’t as bad as the first time; this only lasted about two weeks.” Hunt said

“I’ve never had shingles in my life, and now I’ve had it twice, both times associated with COVID.”

According to Hunt, her second shot was merely a formality. No side effects, no outbreaks, nothing.

After getting her vaccines, Hunt continued to wear a mask and follow social distancing guidelines, even though she’d had the virus and been vaccinated.

Just over two months later, Hunt was once again being rushed to the hospital.

In the emergency room at McLeod Regional Medical Center, a nurse was taking Hunt’s vitals, three doctors had arrived and a battery of tests were being run.

“There’s people going in and out and checking me over,” Hunt said. “They checked me for the flu, for strep and for COVID. While they were waiting on those results to come back, they did a chest X-ray, some blood work and a CT scan.”

Only the COVID test came back positive.

The attending nurse seemed to find this outburst amusing.

“She threw her head back and started laughing,” Hunt said. “Then she asked me, ’What does that mean?’

“One of the doctors still in the room stepped in,” Hunt said. He told her: “Vaccines do not keep a person from getting COVID-19. It only lessens the severity of the symptoms.”

Troponins are a group of proteins found in skeletal and heart (cardiac) muscle fibers that regulate muscular contraction. Troponin tests measure the level of cardiac-specific troponin in the blood to help detect heart injury. There are three types of troponin proteins: troponin C, troponin T and troponin I. When heart muscles become damaged, troponin is sent into the bloodstream. As heart damage increases, greater amounts of troponin are released in the blood. High levels of troponin in the blood may mean you are having or recently had a heart attack.

“The cardiologist determined this was from the stress COVID was having on my heart,” Hunt said. “The levels started dropping pretty quickly, so they decided to monitor it for a while and not keep me overnight.”

Hunt was given two IV bags of Remdesivir and sent home a short time later.

Remdesivir is a drug that prevents the virus from producing a particular enzyme that is necessary for the virus to replicate itself. Once this happens, the virus is no longer able to spread within the body.

Research shows that when patients with moderate COVID-19 receive Remdesivir, their symptoms improve more quickly. The drug has also been shown to shorten the duration of patient hospital stays.

Among severely ill COVID-19 patients, Remdesivir has been associated with fewer deaths.

“I have a severe headache,”, she said. “It’s the shingles. They’re coming back.”

Given what she’s experienced in the last year and half, did she plan if she was going to take a third shot or a booster?.

Pfizer plans to request FDA authorization of its booster dose in the fall based on positive early study findings.

“No,” she said, “I will not take anything else.

FLORENCE, S.C. -- Investigators have charged a Florence man in connection with the Sept. 9 shooting of another Florence man on South Fifth Street in Florence.

Jennifer Hunt recovers at home on July 15 in Darlington after getting COVID-19 for a second time.

Jennifer Hunt returned to work on July 22 after recovering from her second battle with COVID-19 in Florence.