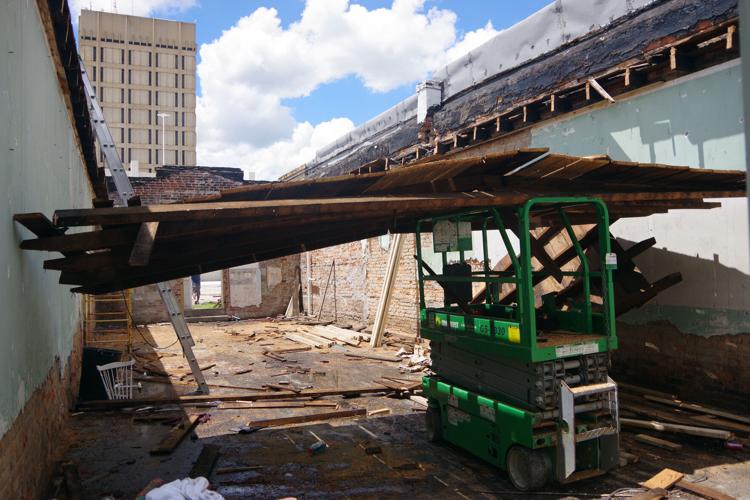 A construction crew Saturday had removed the roof of 175 N. Dargan St. in Florence in preparation for adding floors above the retail street level. 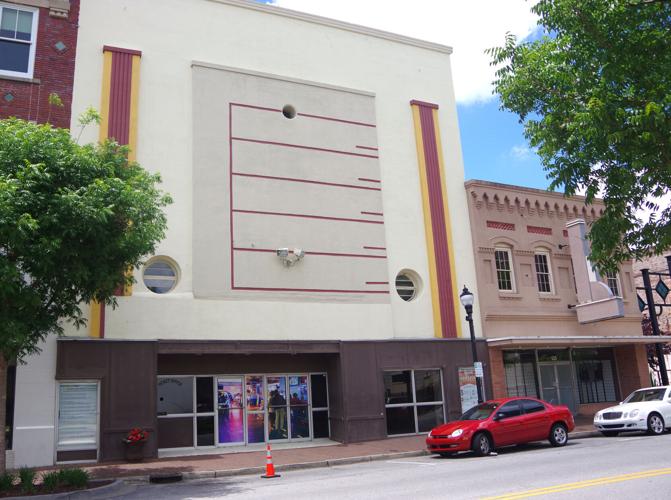 The cty of Florence owns both the old movie theater and the former pharmacy beside it. The city plans to spend $2 million to restore the theater to serve as an entertainment venue for Florence.

FLORENCE, S.C. — Two years after the start of the COVID pandemic downtown Florence is, once again, about to get active.

While other cities saw dramatic business losses during the pandemic, Florence only lost one business as traffic slowed.

"We were very excited about that," Assistant Florence City Manager Clint Moore told Florence Lions Wednesday. "That shows all the hard work our staff does to support those folks. We walked them through the PPP loans. I think we learned more about that than we ever anticipated doing."

The city was also able to offer mini grants to businesses during the pandemic, he said.

"To me it shows the sustainable economy we've been able to create down there," Moore said.

"To date, we've seen more than $250 million invested in downtown since we started the revitalization process. That's public and private dollars," Moore said. "Last couple of years we're seeing $25 of private investment for every dollar of public investment."

"That says a lot about our downtown given interest rates and supply chain issues — folks are still wanting to invest," Moore said.

While downtown has been quiet recently, work will soon start again.

The building at 175 N. Dargan St. will soon be home to a jewelry store and two stores that aren't there now, Moore said.

"This past summer we purchased 127 West Evans, which is the old Phil Nofals building where the shoe store used to be," Moore said. "That's one of the few vacant buildings downtown and we were able to purchase it and put a roof on it."

Moore said the city is working with prospective developers before deciding how to move forward.

"We'll require retail of restaurant on the bottom floor and then allow for either office or residential on the other floors," Moore said.

The city will open the proposals in mid-June.

The city also owns the theater downtown and the pharmacy adjacent to it.

"We took out a bond to help redevelop that property. Right now we have a $2 million budget to redevelop the theater," Moore said. "A few years ago that was a good number but things have drastically increased. We've had to go back to the drawing books and really assess what all we can accomplish with that."

"I think we'll be able to do a lot with the theater and bring it back to life and allow for different things to take place there," Moore said.

Originally, plans for the theater included the old pharmacy, but the design of the two buildings don't "match up" so the focus has turned to the theater, he said.

Prospective development isn't limited to south of the railroad tracks.

"The Rainwater buildings, those are very good opportunities. They have good owners," Moore said.

While the building may not be occupied, one of the buildings will play host to a "very large mural" that will be something interactive, Moore said.

"It's also going to be a great visual for out of town folks going to McLeod, going over Church Street, you're going to be able to see this great mural there," Moore said. "We'll be teaming with a local artist out of Orangeburg and we'll be working with the community and with our recreation folks, the kids in some of our programs will actually be doing some of the painting."

"(The artist) installs them in five by five panels. He'll take them to our community centers and allow the kids to paint them; he'll do the final touches and he'll do the final installation. That's a very exciting project," Moore said. "It's going to be a great project."

Work on Urban Square — a large-scale project across from the City Center — continues, Moore said.

As the city's contribution to the project it will build a parking garage on the site.

"The developer will be responsible for building about a 124-unit apartment building. They'll have a few one- bedroom units, mostly two," Moore said.

The development will also a feature a few larger units.

"They've done a market study for our area and see a demand for three-bedroom units," Moore said.

The development will also feature a 30,000-square-foot office development, 120 hotel rooms and a small conference center.

"There's also going to be a third component they're still massaging out as to what they're going to do, but it'll probably end up being mixed-use-type area with brownstone or town homes associated with that," Moore said.

As development takes off, Moore said the city is looking at a master plan for downtown redevelopment to make sure it contains a healthy mix of office, retail and residential and remains sustainable.

FLORENCE, S.C. -- Francis Marion University staff and faculty gathered Sunday with congregants from Trinity Baptist Church and the Rev. Calvin Robinson to remember those who are buried in a cemetery on the campus of the university.

FLORENCE, S.C. — Saturday's Jam Fest at the City Center Farmer's Market in Florence drew an overflow crowd as vendors sold their wares to live music while judges put their paletes to work to determine who had the best jam this year.

Leadership Florence Kickball for a Cause benefits six nonprofits

FLORENCE, S.C. -- Balls were kicked. Bases were run. Some players may be a bit sore Sunday morning but overall Les Echols with the Greater Florence Chamber of Commerce said Saturday's Kick Ball for a Cause was a success.

FLORENCE – Dudley Saleeby Jr. of Florence, who served as solicitor of the Twelfth Judicial Circuit of South Carolina for 20 years, died Sunday…

FLORENCE, S.C. -- The past, present and future converged at the corner of Palmetto and Dargan streets in Florence Thursday morning with the unveiling of a new historic marker.

FLORENCE, S.C. — Bigger is not always better, but in the superhero world, and for Florence’s Galactic Comics, it certainly doesn’t hurt.

Why counterfeit pharmaceuticals are becoming a big problem in the U.S.

Oxford students walk out in support of Uvalde

Oxford students walk out in support of Uvalde

A construction crew Saturday had removed the roof of 175 N. Dargan St. in Florence in preparation for adding floors above the retail street level.

The cty of Florence owns both the old movie theater and the former pharmacy beside it. The city plans to spend $2 million to restore the theater to serve as an entertainment venue for Florence.