Subscribe
Read Today's E-Edition
Share This
Dr. Jimmy Bell to hang up his stethoscope after 50 years of taking care of Hartsville patients
0 Comments
Share this
1 of 2 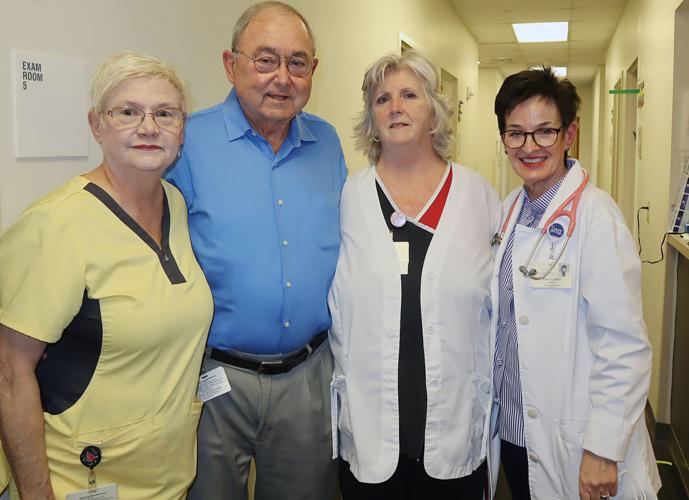 Dr. Jimmy Bell will be retiring in December after 50 years in family medicine. Sylvia Ward, left, Ramona O’Neal and Shari Carter work with Bell at The Medical Group in Hartsville. 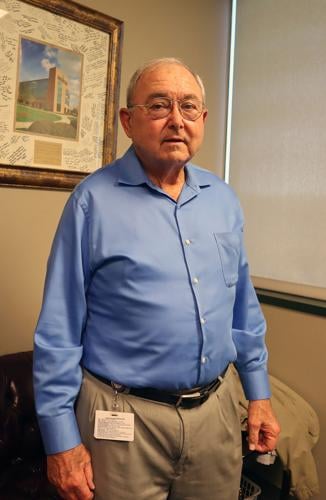 Dr. Jimmy Bell will be retiring in December after 50 years in family medicine in his hometown of Hartsville.

HARTSVILLE, S.C. — Dr. Thomas James “Jimmy” Bell Jr. returned to Hartsville as a young doctor ready to dedicate his life to taking care of families in his hometown.

Fifty years and six months later, Bell is still practicing family medicine in Hartsville but with his sights on retiring in mid- December. Bell is with The Medical Group at Carolina Pines Regional Medical Center.

In 1972, at a time when few doctors were headed to rural Southern communities to practice medicine, Bell made that decision. He said being able to come back to Hartsville has been one of his best decisions, and although he is looking forward to retirement, Bell said, he will miss his patients and the staff he works with.

So much about medicine has changed in the 50 years since he started, Bell said. There have been life-saving advancements. One of the greatest advancements has been in health care for heart attack patients, he said. Now patients have options such as bypass surgery, clot busters, and the knowledge of the effect of a quick response time.

Bell said they didn’t have ultrasound equipment back in the day, and doctors couldn’t determine the sex of a baby before it was born; now they can.

When he started in medicine the first CT scans were being invented.

“We had to work hard to make a diagnosis,” he said.

Bell said although he won’t be practicing much longer he would still like to see a cure for cancer. He said dementia seems to be on the rise, and he would like to see that figured out, too.

“I will miss the relationships I have had with patients over the last 50 years,” Bell said.

There have been many.

Bell said when he hit his 40th year in medicine he determined that he had seen at least 400,000 patients. At one time, Bell said, he was seeing 50-60 patients a day in his office and more than that with patients in the hospital.

Bell said he has treated as many as four generations in some Hartsville families.

He remembers when Byerly Hospital was a wooden building. In 1969, he said Byerly built the brick structure and tore down the old wooden building. Byerly was later replaced with Carolina Pines.

One of the nurses who has been with him for 45 years said he is a great doctor to work with.

“I wouldn’t still be here if it wasn’t for him,” Ramona O’Neal said. “I will miss him.”

She said he is cheerful and doesn’t get angry easily. He has a great bedside manner, she said.

Shari Carter, a nurse practitioner with The Medical Group, has worked with Bell for 22 years. She said he took her in as a student. Carter said at first he told her he didn’t have time, but she asked a second time, and he agreed.

“As a person he is tremendously caring and compassionate,” she said. “He cares about Hartsville, the hospital and his patients.”

She said even now you have to get up early in the morning to get ahead of him.

Bell, a 1961 graduate of Hartsville High School, attended Clemson University on a football scholarship and majored in pre-med. He lettered all four years. He was named an Academic All American as a student athlete, served as class president his sophomore and junior years and student body president his senior year.

He graduated from the Medical University of South Carolina in 1969 and completed a rotating internship at Charlotte Memorial Hospital before entering the United States Air Force, where he completed his family medicine training at the U.S. Air Force Pediatric Clinic and served his country.

Bell has been chief of staff, chief of medicine and chairman of intensive care at Carolina Pines. He also served as a member of the hospital board.

He and a partner started a rural health clinic in the early 1980s. He practiced there until 2002. Since then, he has worked with Carolina Pines Regional Medical Center and clinic. He has volunteered his time with the Free Medical Clinic of Darlington County and holds the distinction of “Physician of the Year” for rural medicine in South Carolina. He received the Pioneer Award for Rural Health Service in South Carolina.

As service to the Hartsville community, Bell was on the city council for 10 years. He is a member of First Baptist Church, where he has served as a deacon and participated in six summer mission trips to medical clinics in Trinidad, West Indies.

He is a founding member/director of the YMCA in Hartsville. He has served as a member of the State Vocational Rehabilitation board for District 6 for17 years. He has been president of the South Carolina Academy of Family Medicine (1988) and Board Chairman in 1989. He has served as president of The MUSC Alumni Association.

He has been a Coker College team physician and member of the Board of Trustees.

He is a recipient of the Order of the Palmetto, the highest civilian award presented by the governor of South Carolina, presented by Gov. Nikki Haley.

Bell said he loves Hartsville and is looking forward to spending more time doing the things he enjoys. It’s a great college town and also has the Governor’s School, great sports teams and is a good place to raise a family, he said.

Bell and his wife, Nancy, had three children, a son, James, who is deceased, and two daughters, Elizabeth, a speech pathologist; and Andrea, a nurse practitioner, who worked with her father for about 20 years. Both live in Hartsville.

Bell said his hobbies have included boating – shrimping and crabbing – hunting, but he gave that up.

“I never had the patience to be a fisherman,” he said.

Bell and his wife have plans to travel. He said he has traveled overseas but not that much in the United States. He would like to go out West.

“I want to see the leaves in the fall, too” he said.

Cooks for Christ to host benefit for Steve Galloway

FLORENCE, S.C. – The final Cooks for Christ benefit of 2022 is Dec. 1. The benefit recipient is Steve Galloway. Galloway’s benefit will be held at the West Florence Fire Station, 3379 Pine Needles Road in Florence on Dec. 1.

Cooks for Christ serves up bog for the ministry's future

FLORENCE, S.C. -- Cooks for Christ is renowned for its commitment to service to those in need through chicken bog benefits. On Oct. 27 the ministry cooked to benefit itself so that it might continue to serve others.

FLORENCE, S.C. -- School bus stop arm scofflaws in Florence will find those buses have cameras -- at least 25 of them do -- and what those cameras capture can lead to prosecution under a new state law.

FLORENCE S.C. -- Florence County Sheriff's investigators have charged a Dillon man with murder in connection with the shooting death of a Tara Village resident.

FLORENCE, S.C. -- Lights 4 Paws will return this year bigger and brighter than ever after it took last year off to ride out the COVID-19 pandemic.

FLORENCE, S.C. — Investigators are looking into the circumstances surrounding the death of a person whose body was discovered late Wednesday m…

FLORENCE, S.C. – Shanquilla Major’s Thanksgiving blessing came a few weeks early. On the morning of Nov. 10, while sitting in the drive-thru l…

Dr. Jimmy Bell will be retiring in December after 50 years in family medicine. Sylvia Ward, left, Ramona O’Neal and Shari Carter work with Bell at The Medical Group in Hartsville.

Dr. Jimmy Bell will be retiring in December after 50 years in family medicine in his hometown of Hartsville.