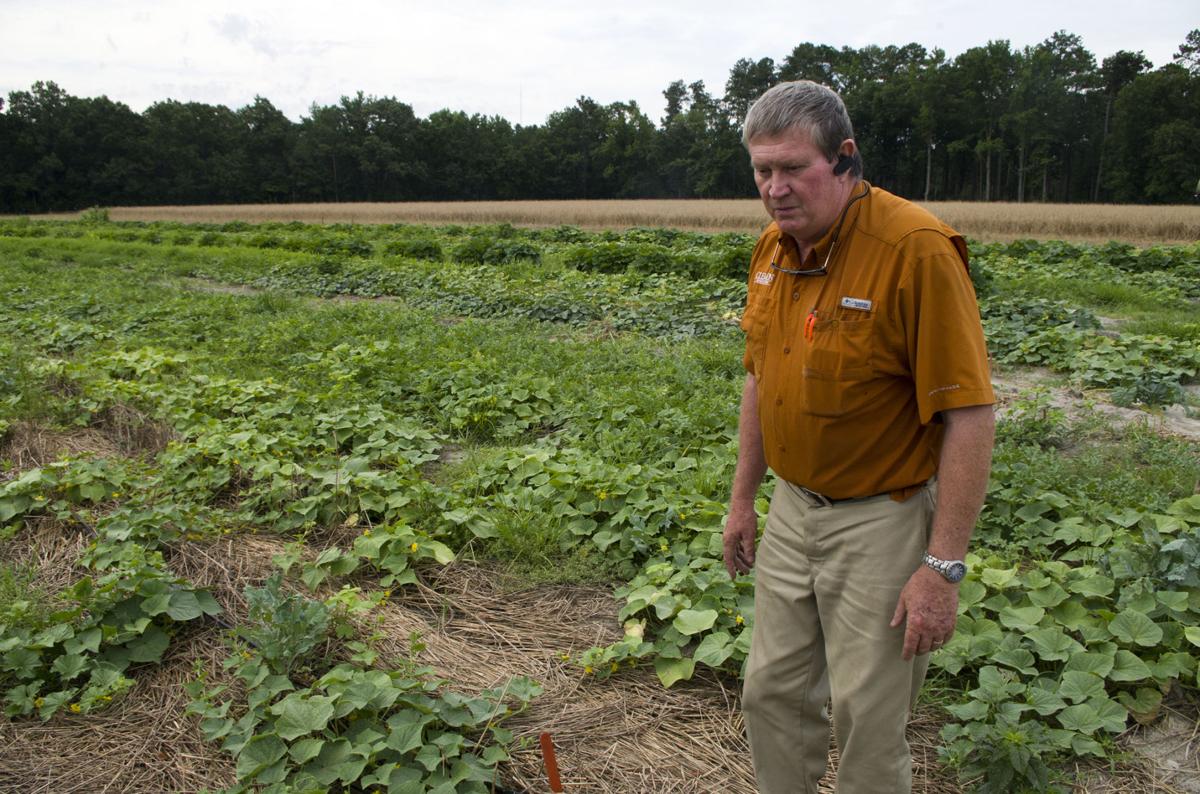 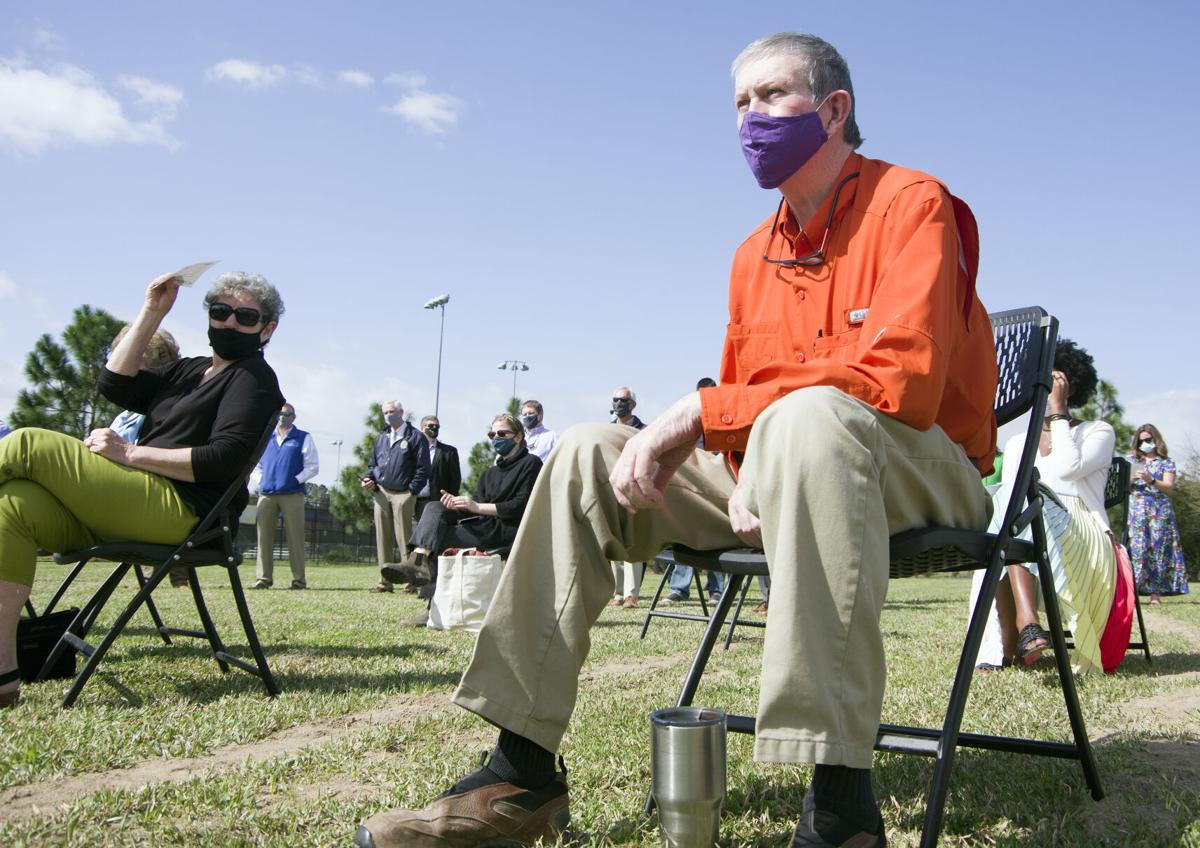 Clemson Extension Agency Tony Melton sits in the crowd as students join civic leaders for the ribbon cutting for the Farm at Florence One, located on Jennie O’Bryan Boulevard in Florence. Melton has been a fixture in Pee Dee agriculture for more than 40 years. 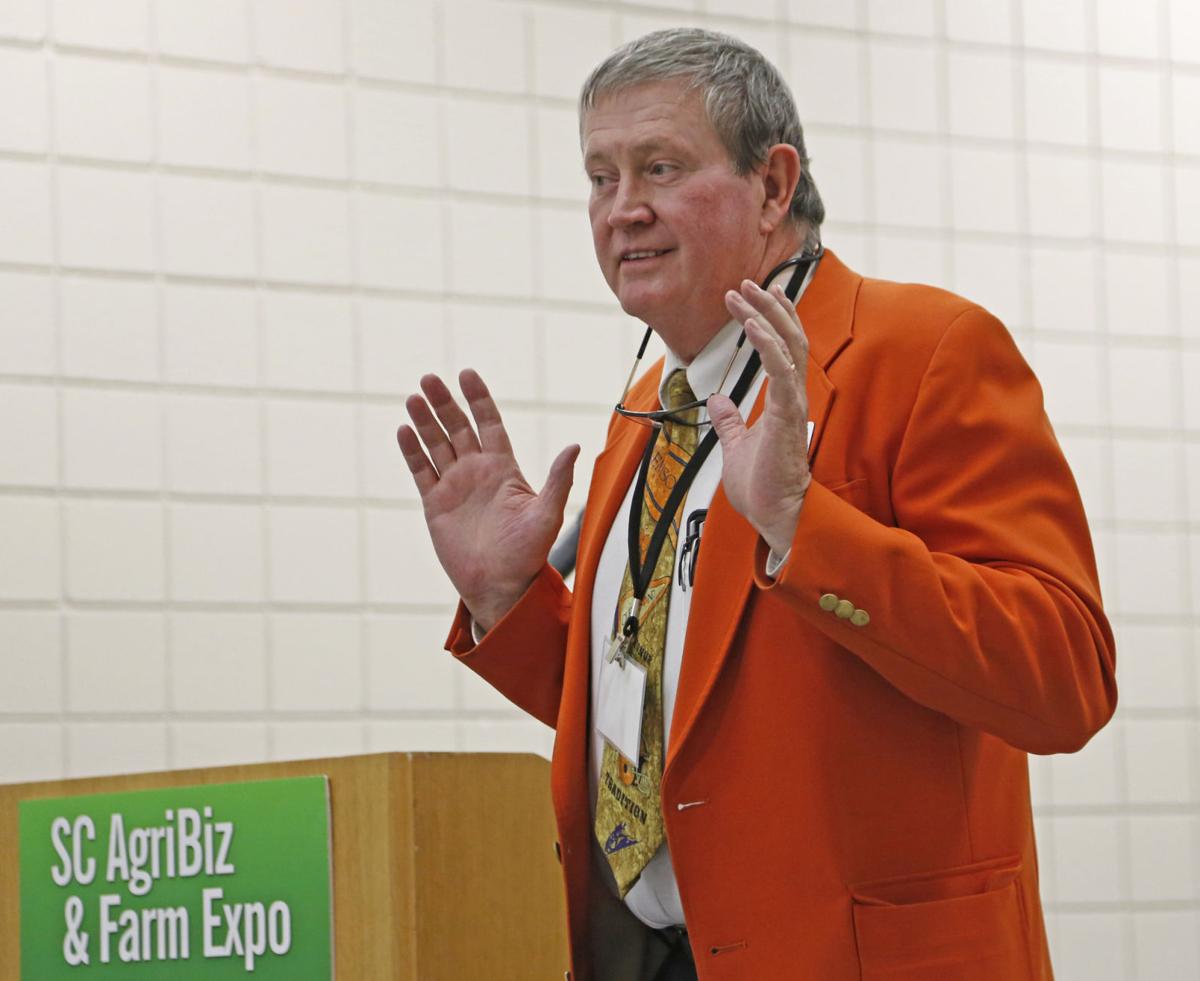 Longtime Clemson University extension agent Tony Melton offered his perspective gained from 50-plus years of agricultural experience to the Small Farmers Symposium on the first day of the 2017 S.C. AgriBiz & Farm Expo at the Florence Civic Center.

He is working on a genetically superior version of butter beans that is heat tolerant. At the same time, he is battling a genetic liver disease and is down to about 100 pounds.

Melton and his wife, Mitzi, sat for a phone interview recently.

On the day of the interview, he said, he was planning a trip to the farmers market to get some butter beans to go with his tomatoes.

He is looking forward to next summer when his heat-tolerant variety of butter bean could be ready for the market. It is a project in progress at the Clemson Pee Dee Research and Education Center on Pocket Road in Darlington County.

Don’t bet against Tony Melton; he’s not done yet.

Being an extension agent is his calling and he’s not ready to relinquish it.

Working is in his genes

Melton has been working on farms in some fashion since he was 4 years old.

“Started picking cotton with Granddaddy. He made me a sack out of flour sacks and a way to put it over my shoulder, and when I was 3-4 years old I was picking cotton into that sack with Mama,” Melton said in a way that you could see the smile over the phone line. “Granddaddy was paying us 10 cent a pound at the beginning.”

“When I was 5-6 years old and I started picking butter beans and he was taking them to the farmers market in Columbia and selling them for $12-$15 a bushel — and we’re still getting $15 a bushel for butter beans,” Melton said.

Mechanization, he said, is what has allowed the price to remain the same over the years.

“I started from there working in the yards and I helped Kent McLeod’s mama — she was kinda like a second mamma to me — and I helped her in her yard to landscape,” Melton said. “At 10 years old I could start in the packing shed with the McLeods. Kent McLeod is the hardest-working man in the face of the earth that I know of.”

“Daddy grew crops at the house and worked at Sonoco until he retired. He was a machinist, could do anything, make anything or fix anything,” Melton said. “At one time they sent the world’s largest drill bit in from Germany for him to work with and he drilled a hole through the middle of it and sent it back.”

“My daddy didn’t have the education; he only went through 3-4th grade because he had to quit school to drive the mules,” Melton said.

Melton graduated from McBee High School and Clemson University twice, once with a bachelor’s degree and again with a master’s degree.

“I graduated high school in 1976, I got my BS in horticulture from Clemson in ‘80. Got my MS when I worked as a researcher in horticulture in Clemson for six years. Got my MS in ‘86,” Melton said. “Continued working for them until ‘89, then became a county agent for Darlington, Florence, Lee and Williamsburg counties.”

He did so well with four counties the Exension Service gave him a dozen to work with and the farmers, landscaper and gardeners who resided therein.

He worked until his first retirement, which coincided with budget cuts.

At that point, Melton said, he was able to retire and did so to prevent anyone else from losing a job.

Much of the job at which Melton has excelled involved making connections and being the conduit through which good information flowed.

“I took all that information and put it together. A lot of times Ph.D.s are so concentrated in some areas they’re not very good communicators. When they start to talk about doing they get above a lot of people’s understanding, they get too complicated,” Melton said.

“(Farmers are) not concentrated in one thing and I try to work it down to where they can take the information in a useful way that they can produce crops,” Melton said.

He did the same for homeowners, landscapers and gardeners.

Having been both a farmer and a researcher the translation was easy, Melton said.

Even in situations where growing conditions can change from one farm to the next, or even one yard to the next, he said.

Melton is working on genetically modified butter beans that are heat tolerant so that they could be grown throughout the area’s growing season.

The project is nearing a conclusion and the improved beans could be ready for farmers’ fields as soon as next summer, Melton said.

“I’m actually developing a different gene for butter beans to produce butter beans that are heat tolerant. I’m still working on that, they’re growing out at the (Pee Dee Research and Education Center) and I’m hoping right now we have a pretty good size planting up,” Melton said. “We’ll harvest those and then replant and by frost we’ll have enough to start giving out to farmers.”

Clemson University is working on getting them registered as a protected variety, Melton said.

Melton said it usually takes about 15 pounds of seed per acre to produce a butter bean crop.

As an extension agent, Melton wrote a weekly column that appeared in the Morning News. In a December column Melton announced that he had stage 4 non-alcoholic cirrhosis of the liver.

“This is a blessing in itself. I know I am dying and can take advantage of the time I have left (including having some fun) while many folks — Just Up and Die. Remember, the God of the Mountain is the God of the Valley,” Melton wrote in that column.

Because of a genetic abnormality his liver is now producing toxins that are killing him, he said.

“But I’m maintaining now and I’m doing fairly well. They got me some treatments and I was trying to get a liver transplant but this disease is so weird and unusual that nobody knows anything about it,” Melton said.

Monthly chemotherapy is now part of his routine.

The doctor in this part of the country who knows much about this disease is in Winston-Salem, Melton said.

At this point he doesn’t yet know if he qualifies for a liver transplant.

“As long as I can keep going, I’m very optimistic; there is always hope in the Lord. There are always things that can be done,” Melton said. “I’m good now. In 30 minutes I can go from good to bad and then back to good.”

It was his calling

“I love to help people, that was my goal. Everything I’ve done in my work as a county agent, it was more of a calling than anything else to help people,” Melton said. “The Lord put me in that position so that I could truly have a calling.”

And like most callings, his calls back to him again and again.

“You stumped me there, that was a tough one,” Melton said when asked what was he most proud of and what made him smile.

“Every time I get to hear from somebody who said ‘it worked, it worked.’ I even got (a letter) the other day that just touched me,” Melton said. “He wrote [that] for years and years he tried to grow tomatoes and ‘you told me what to do,’ because he had some nematode problems, ‘and now I have the most beautiful tomatoes in this part of the country.’”

“That’s what gets me going and keeps me going to the next,” Melton said.

“When we can produce butter beans all summer long that’ll be the proudest day of my career. Could happen next summer,” Melton said. “If it happens I’d just smile from ear to ear for the whole year. It would touch my heart. Help farmers and ordinary people all at the same time.”

“If they whip this disease I’m going to back on Clemson’s door step saying, ‘Hire me back. Let me go again,’ because I’d love to do that, Melton said. “You asked, I’m still looking for the future. I’m going to continue on and get things done.”

Digital Editor Matt Robertson is a veteran journalist who has fulfilled just about every role that a newspaper has and now serves as a key member of the Morning News’ newsroom by maintaining SCNow.com and covering the occasional story and photo assignment.

FLORENCE, S.C. -- As Thursday morning's retirement ceremony for Clemson Extension Agent Tony Melton -- only the first of such ceremonies planned -- there were no fewer than eight different group photos taken with him at the center of the group.

FLORENCE, S.C. -- Investigators have charged a Florence man in connection with the Sept. 9 shooting of another Florence man on South Fifth Street in Florence.

Clemson Extension Agency Tony Melton sits in the crowd as students join civic leaders for the ribbon cutting for the Farm at Florence One, located on Jennie O’Bryan Boulevard in Florence. Melton has been a fixture in Pee Dee agriculture for more than 40 years.

Longtime Clemson University extension agent Tony Melton offered his perspective gained from 50-plus years of agricultural experience to the Small Farmers Symposium on the first day of the 2017 S.C. AgriBiz & Farm Expo at the Florence Civic Center.