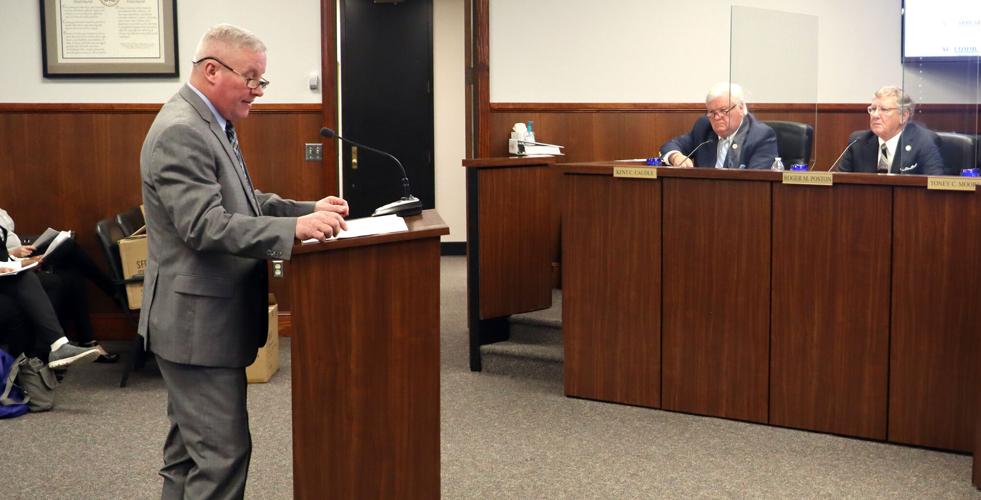 Florence County Sheriff T.J. Joye outlines his reasons to want to close to the public the road that leads to Pitch Landing in southern Florence County. 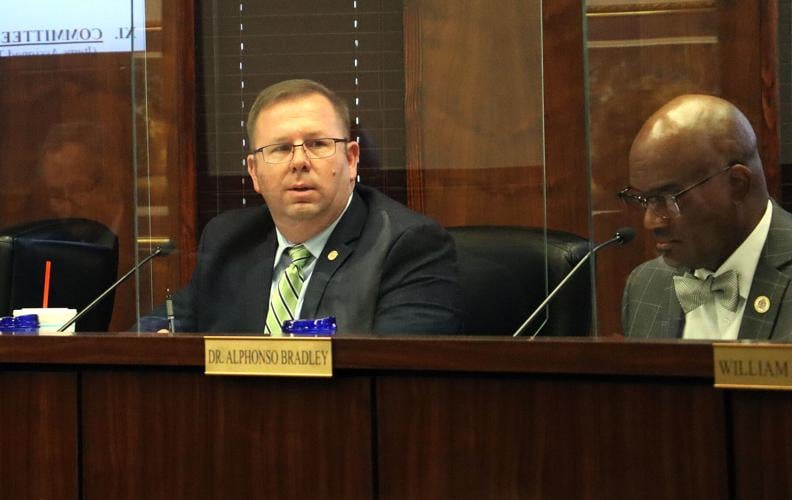 JOHNSONVILLE, S.C. — Pitch Landing, depending on to whom you speak, is a menace, a problem, a great place to fill up a fire truck with water, a source for fond memories, no place to make memories anymore or a key element for future tourism development.

Pitch Landing, described as a smaller landing suited to serving a one- or two-person boat, is on Lynches River off Huggins Road northwest of Prospect Crossroads.

While the landing itself is on private property, it is accessed from North Pitch Landing Road, which residents have asked the County Council to abandon and close.

"I don't' think there's a wrong side, I don't think there's a right side," said Florence County Councilman Jason springs who represents the district in which the landing is located.

"I'm here today to close Pitch Landing," said Florence County Sheriff T.J. Joye, who said it has become a magnet for drugs, drinking and shooting. "Syringes piled up around the landing, beer cans, trash — it is a mess."

"I'm not out to close landings, but I'm out to keep the citizens of this county safe. This is not a safe place," Joye said. "It's open all times of night. My daddy used to tell me if you're out past 12 o'clock, you're up to no good."

The sheriff said it was on patrol deputies' check lists, but with 804 square miles to patrol the agency didn't have the manpower to station a deputy there full time.

Some who spoke recalled fond memories of the landing being the center for water recreation in that part of the county.

"I also have memories of Pitch Landing from when I was a kid, but it's not the same place it was even a few years ago," said Kelvin Hanna, whose family owns the landing.

"His house was struck by a 9 mm round," Joye said. "Mr. Hannah called me that night and I met him early the next morning."

"Shots rang out and we heard something hit the back of our house," said Karley Hanna.

A family member went to check on the bullet and found it originated at the landing.

Karley Hanna said there were men at the landing who were drinking and shooting beer cans off a log.

"He [the family member] told them they hit the back of the house and they got into a car and left," Karley Hanna said.

Karley Hanna said the family has had to call sheriff's deputies to the landing in the past to remove homeless people who had tried to make the landing their home.

"If Pitch lLnding remains open the vision we have for our future will be unattainable," Karley Hanna said. "Pitch Landing hasn't been family-friendly in a couple of decades."

"I understand the problem needs to be addressed," said Barry Frick with River Ratts — an outfitting and river tour company — and with Friends of the Revolutionary River — an organization that's developing Lynches River as a tourist draw for the county.

Frick said Lynches River has about a landing every five river miles, or so, which makes it ideal for tourist paddles as well as safety.

Frick said river rescues work best when the rescuers travel down river when possible, but on that stretch of river water levels, a swamp and a beaver dam all pose challenges that make Pitch Landing an ideal put-in or take-out for rescue operations.

It is also an ideal place for Johnsonville firefighters to access water for their tankers when the need arises, said Ken Hanna, whose family owns another landing along the river.

Were the fire department to lose access to the landing and the water it could cause insurance rates to increase in the fire district, Ken Hanna said.

Frick, who lives at and operates River Ratts out of Indigo Landing, said he worked with the South Carolina Department of Natural Resources to resolve similar issues at his landing.

"I put up signs at Indigo Landing that it closes at 6 p.m.," Frick said "If you don't close the road and take care of the landing it'll solve the problem."

Frick said there were other issues involved.

"There is state land only accessible by this road," Frick said of 16 state-owned-acres of land along the river's bank.  "Across the river from this 16 acres is 400 additional acres owned by the state."

"I pick up at a lot of landings. When I drop someone off I have my tongs and bucket with me. I personally have not been to this landing in years but I hate to lose any of our landings."

Frick also argued that to close the landing would not solve the drug problem, only move it elsewhere.

"We need to take care of the drug problem where it's at and not move it," Frick said.

The river guide offered to help keep the area cleaned up and to install signs at the landing — something Florence County Commissioner Kent Caudle offered to support with the donation of 4x4 posts he had remaining from one of his previous projects and to provide some of his county discretionary funds to pay for the signs.

Ken Hanna offered to lend a hand to Frick to install the posts and signs.

Even back in the day litter was an issue.

"I remember every Sunday we were down there as a kid somebody cut a foot on a beer bottle," Springs said.

"I can't count the number of people I've talked to on both sides of this thing, and every time I hang up the phone, I've sided with them," Springs said.

"I didn't sleep last night," Springs said of the stress and emotions tied, for him, to the issue.

"We'll never get Pitch Landing back to where it was," Springs said. "Each time I've gone down there I've been disheartened."

Drug paraphernalia and beer cans are problems to be found at many of the county's landings, he said.

Springs said he hoped the landing situation would bring the community together for a common cause.

Florence's Weiss finds his calling at House of Hope

FLORENCE, S.C. -- A shooting that involved two juveniles under five-year-old sent one of them to the hospital with life-threatening-injuries.

Edwards to perform at Florence's Colors of Cancer tonight

FLORENCE, S.C. -- Diners who participate in the Colors of Cancer dinner Thursday will be entertained by the sultry voice of Jennifer Edwards, a veteran of the music business with appearances on the stage at the famed Apollo Theatre along with Diddy's Making the Band 3.

SCRANTON, S.C. -- One person who was attempting to elude law enforcement died in a two car crash Friday afternoon.

FLORENCE, S.C. -- One person was injured and a Florence home damaged by fire late Tuesday afternoon.

FLORENCE, S.C. -- A three-day enforcement and warrant service operation by Florence County Sheriff's deputies that ended Friday resulted in the arrest of 99 people on what were primarily drug and traffic offenses.

DARLINGTON, S.C. -- A juvenile died Friday after they were involved in a shooting.

State Department says don't use Uber in areas around Cancun

State Department says don't use Uber in areas around Cancun

Florence County Sheriff T.J. Joye outlines his reasons to want to close to the public the road that leads to Pitch Landing in southern Florence County.