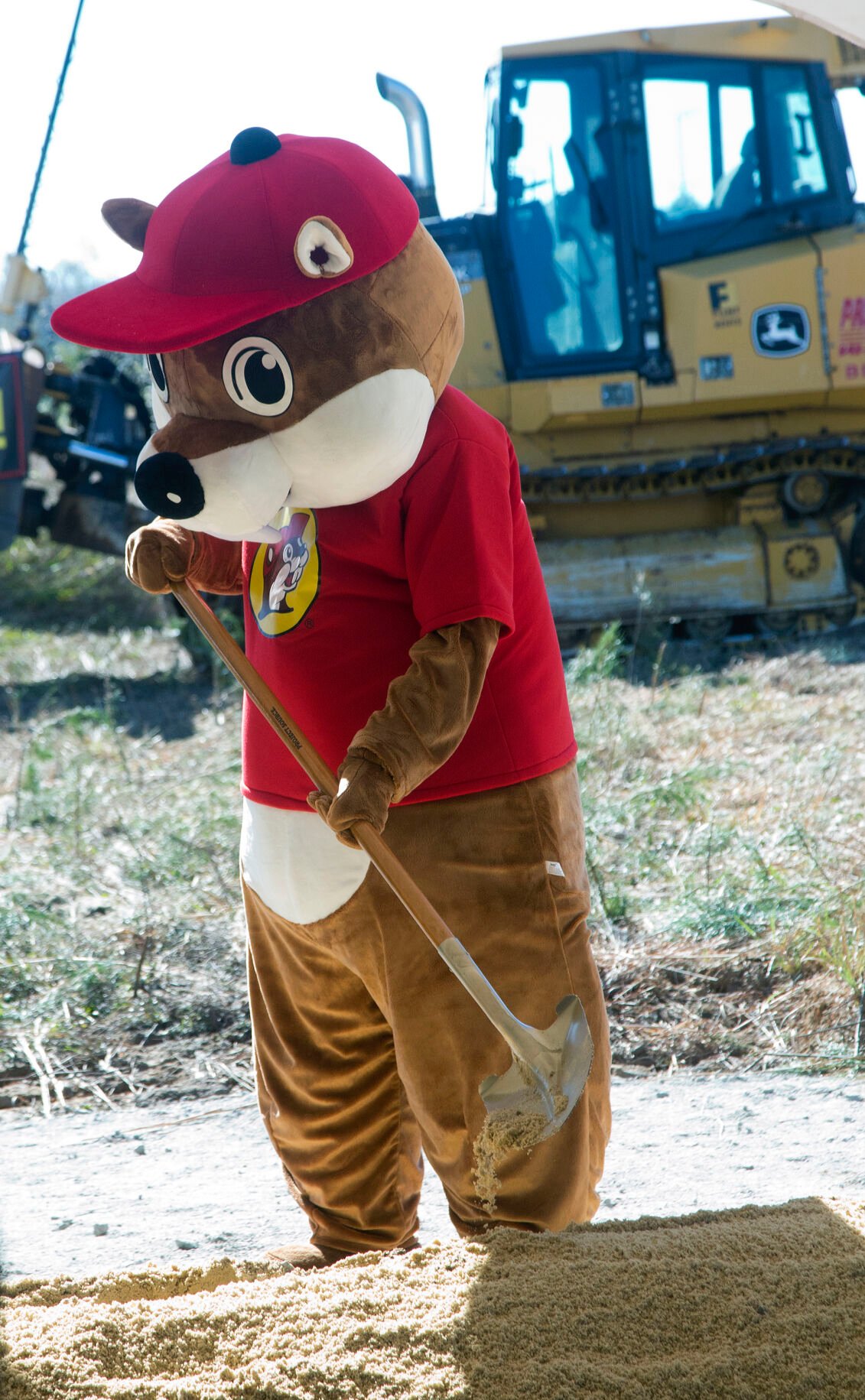 The Buc-EEs mascot pours dirt from his shovel during the groundbreaking ceremony for the Buc-EEs to be located at exit 170 on Interstate 95. 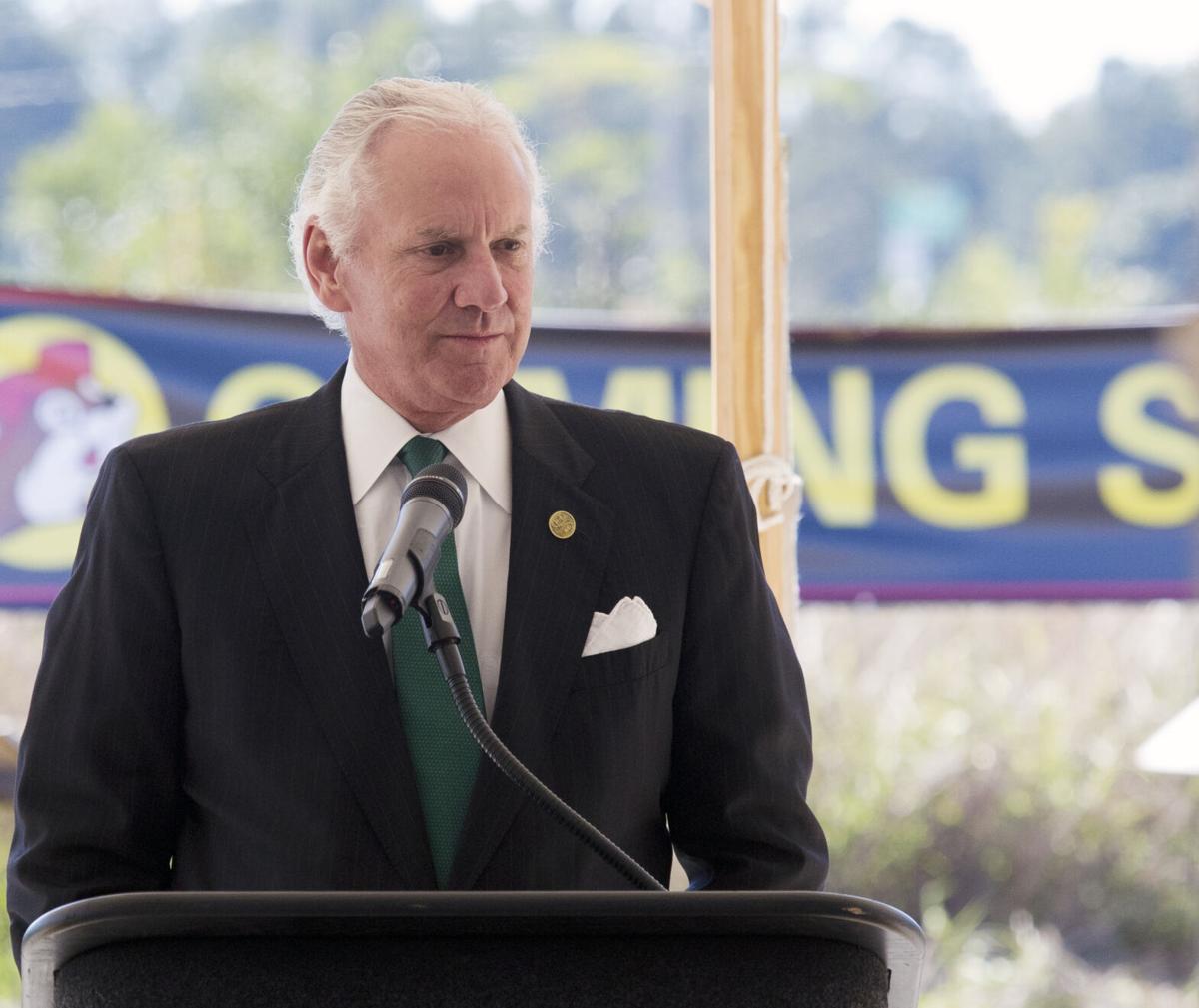 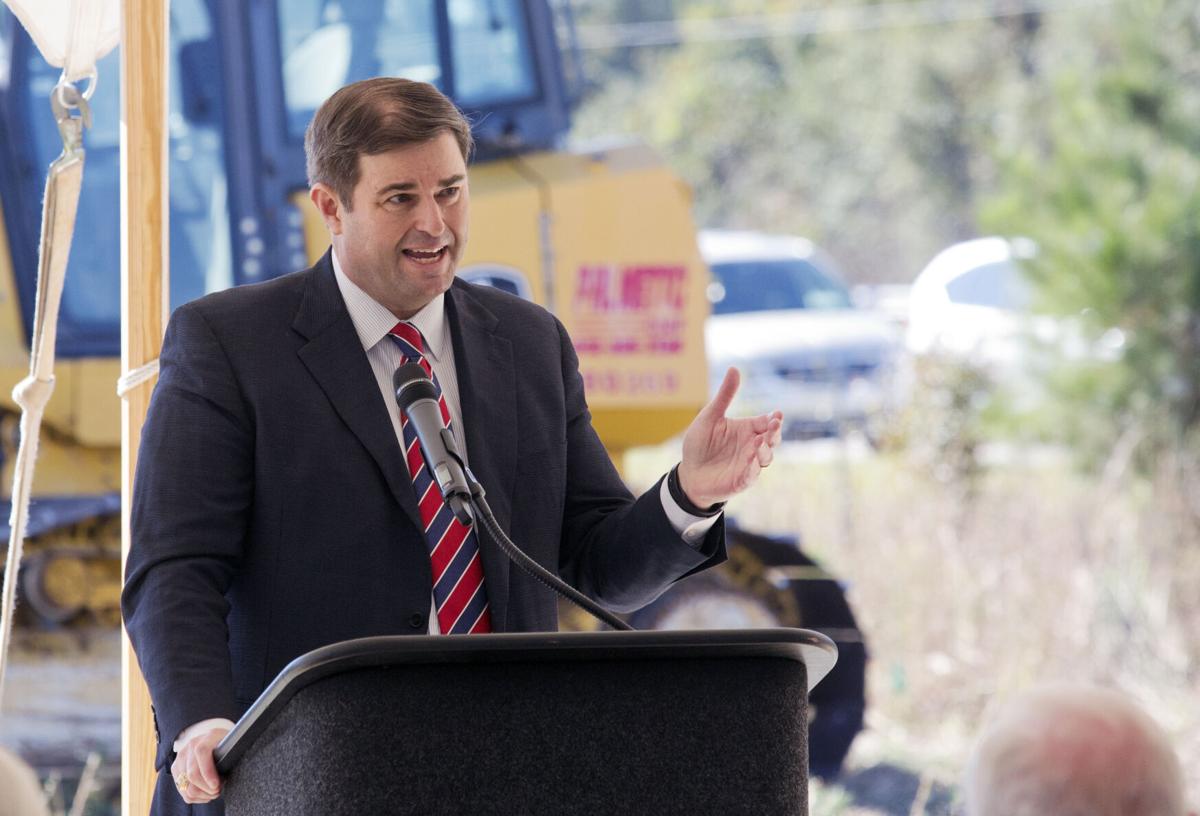 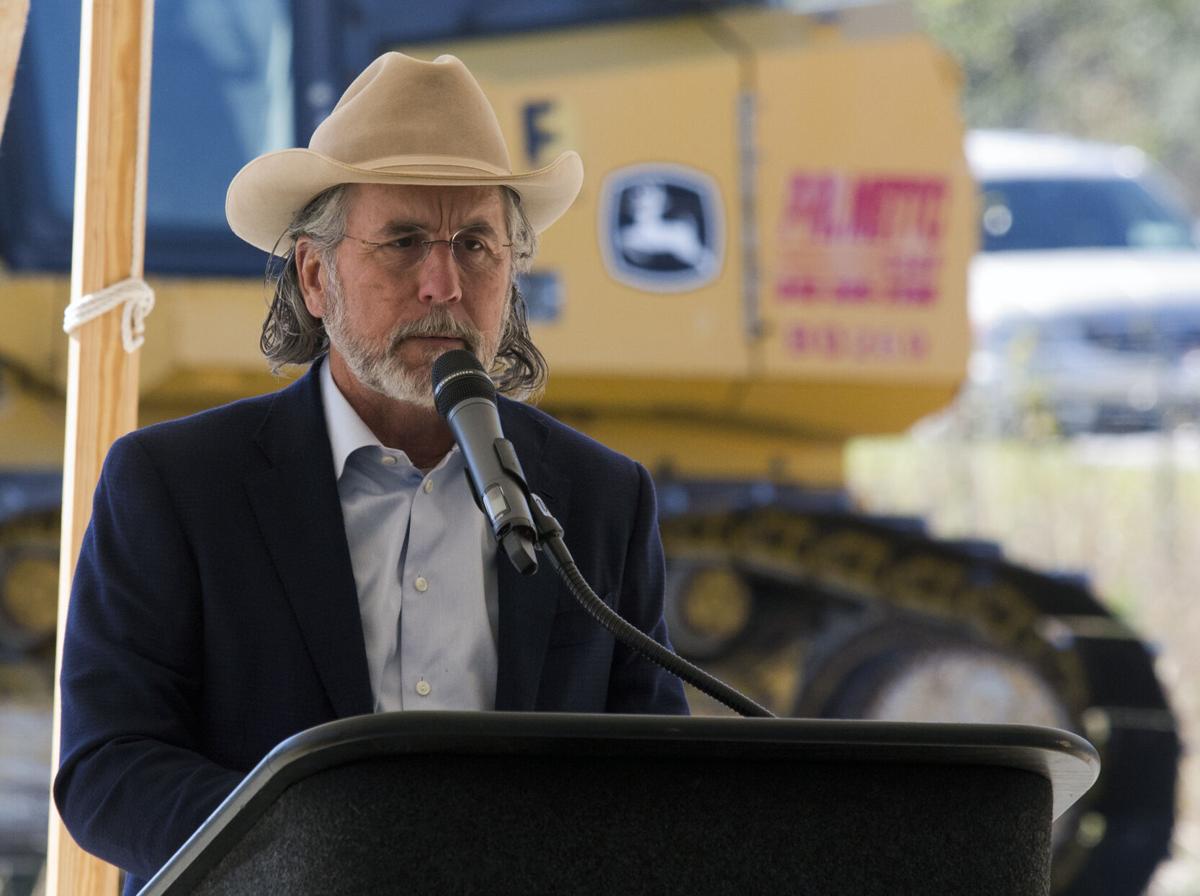 FLORENCE, S.C. — South Carolina and Texas now share more than a love of football and their state flags.

Buc-EEs is considered something of a Texas institution and was founded in the state. The company also has locations in Alabama and Georgia. The Florence Buc-EEs will be the first in the Palmetto State.

Gov. Henry McMaster said that the states share a love of their state flags: the Palmetto and crescent moon of the South Carolina state flag and the lone star of the Texas state flag. He also added that at the end, it was South Carolina residents and Texas settlers fighting the Mexican army at the Alamo.

Smith discussed football when he spoke before the groundbreaking ceremony Thursday morning.

"I always heard about Buc-EEs when I was growing up," Smith said. "I have several friends who would tell me about that over these last few years."

Smith said he received a call from Dr. Eddie Floyd of the Drs. Bruce & Lee Foundation asking him to meet with someone.

"Little did I know that that meeting would be with Beaver Aplin," Smith said. "Unfortunately, that meeting was at a Texas A&M-Carolina football game and our beloved Gamecocks got whipped as usual."

In 2019, Texas A&M defeated South Carolina by a score of 30-6 at Kyle Field in College Station.

"So Beaver celebrated his victory and left South Carolina," Smith continued. "It was a pleasure to have him and to learn about this unique concept."

Smith did the customary Google search and learned that Aplin hailed from a long line of convenience store operators in Louisiana. But, Smith said, Aplin wanted something different and attended Texas A&M to major in construction science engineering. He added that Aplin's path veered back toward his family tradition but on a grander scale with a twist.

"I am really thankful, Beaver, that you decided to veer your course and open Buc-EEs and bring it here to South Carolina," Smith said. He then offered some tips to help Buc-EEs succeed in the state. "South Carolina and Texas do have some differences."

Smith said the Buc-EEs would need to stock saltwater taffy and hermit crabs for those visiting the store on the way to Myrtle Beach and chicken bog for the locals.

"You may have the best brisket but we need to teach you how to have the best chicken bog," Smith said. "I also want to remind you that I know you're an Aggie but around here we have Clemson and Carolina fans. I don't want to see any Aggie paraphernalia on the shelves in there."

Smith said the Gamecocks had suffered a "little hiccup" after losing to the Aggies this year.

After the Texas A&M game and a loss to Mississippi, coach Will Muschamp was fired.

'We would really appreciate you not rubbing that into us," Smith said.

Aplin said later that the store would stock plenty of Gamecock and Tiger merchandise.

The building of the Buc-EEs was announced in August 2019 after the Florence County Council approved ordinances authorizing a fee-in-lieu-of-tax agreement with Buc-EEs and the foundation and including the project property in a joint industrial park between Florence and Darlington Counties.

The company will be investing $35 million in the county and creating 170 new jobs.

Aplin said Thursday that the company expects a lot from its employees but always strives to pay the highest wages. He added that the store could be open by Christmas of 2021.

It was announced at the groundbreaking that the site would also be home to a shopping center and a freshwater ecology study center of Francis Marion University.

WASHINGTON, D.C. — South Carolina Sen. Lindsey Graham says he respects Congressman Tom Rice but disagrees with Rice's decision to vote to impeach President Donald Trump. Graham spoke about Rice during a virtual press call for South Carolina media held Friday morning. After an opening statement, he was asked about Rice's decision by a reporter from The State.

Not her first plague: 102-year-old Florence woman gets her COVID-19 vaccine

FLORENCE, S.C. -- Florence's Evelyn Guile Friday braved the rain and got her COVID vaccine at a Florence clinic -- no big thing since this isn't her first plague.

The Buc-EEs mascot pours dirt from his shovel during the groundbreaking ceremony for the Buc-EEs to be located at exit 170 on Interstate 95.