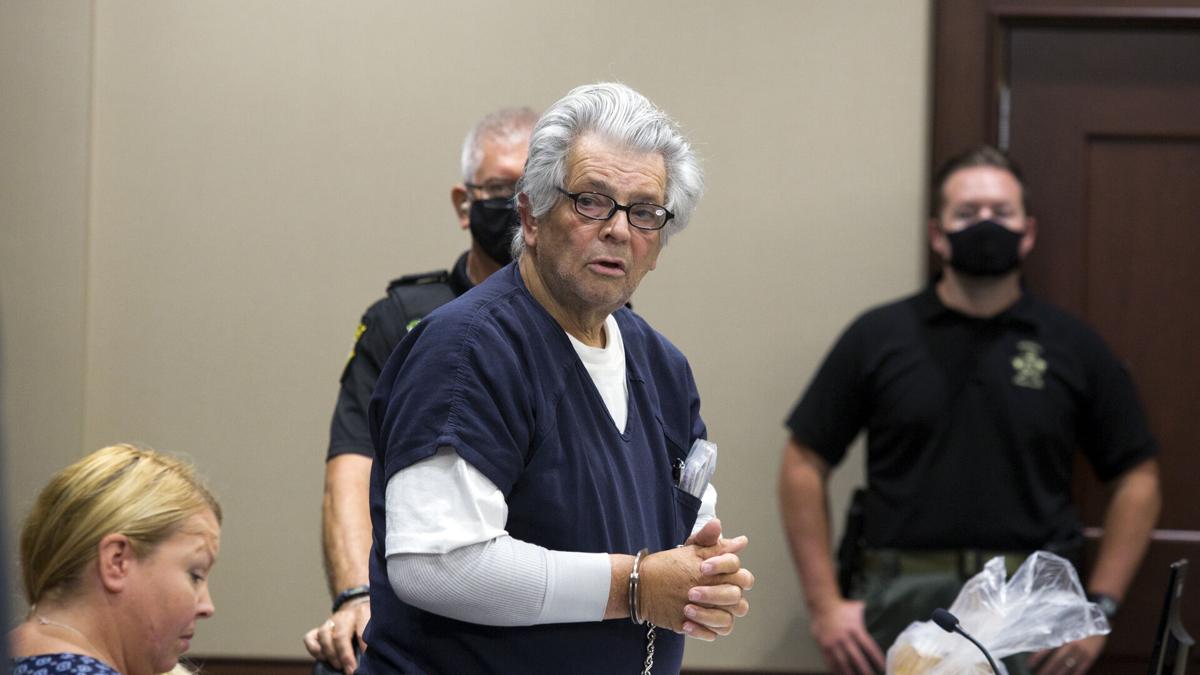 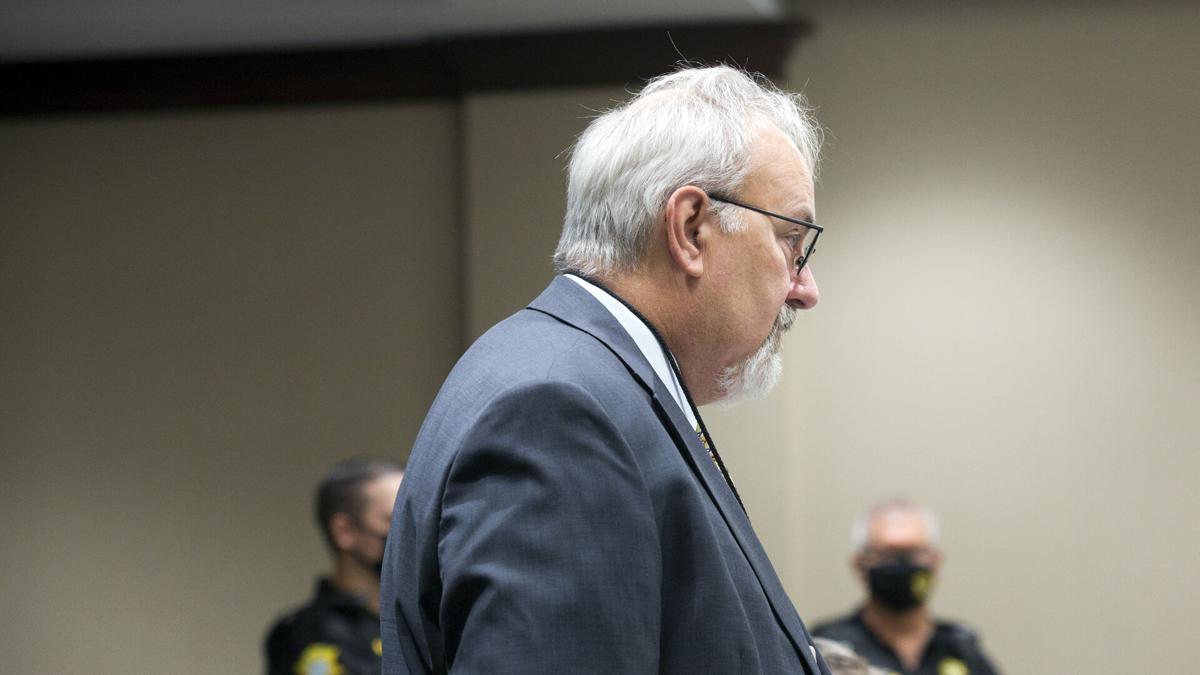 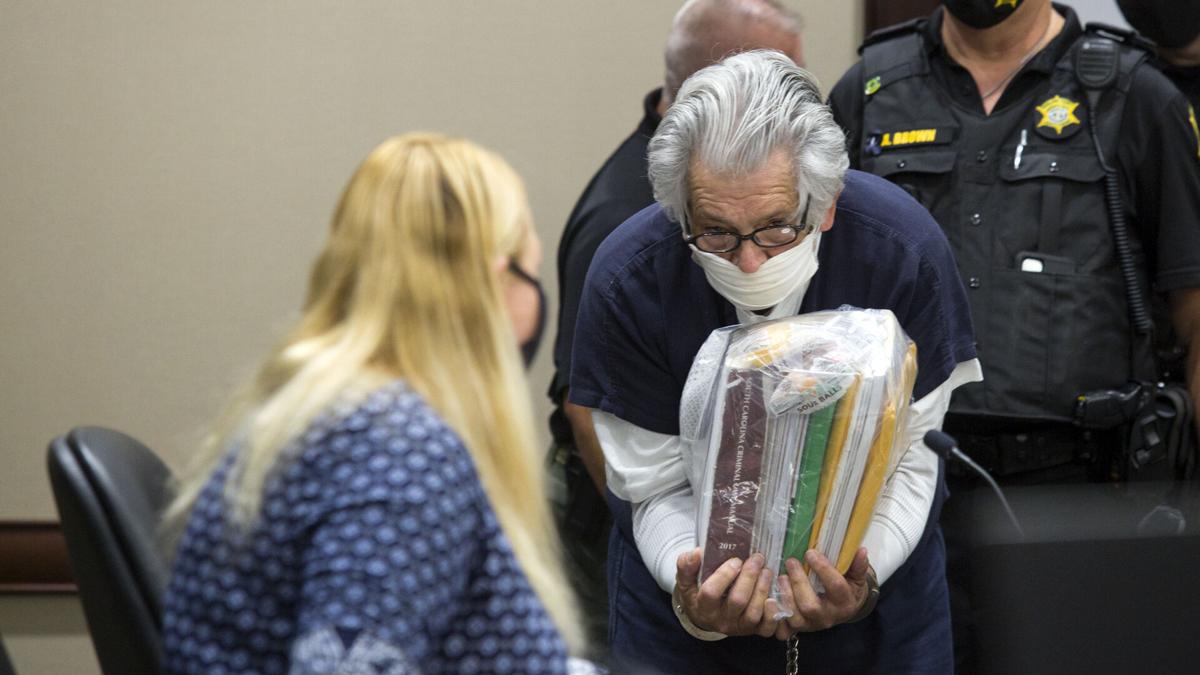 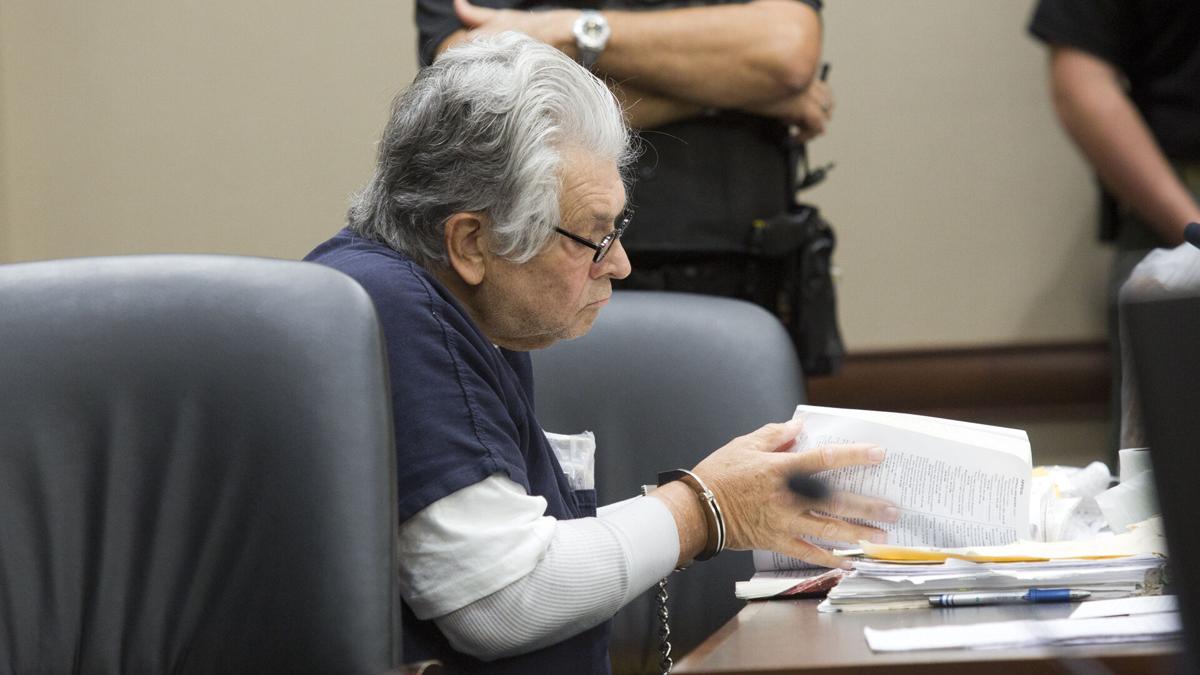 Fred Hopkins looks through a book at a hearing Wednesday morning. 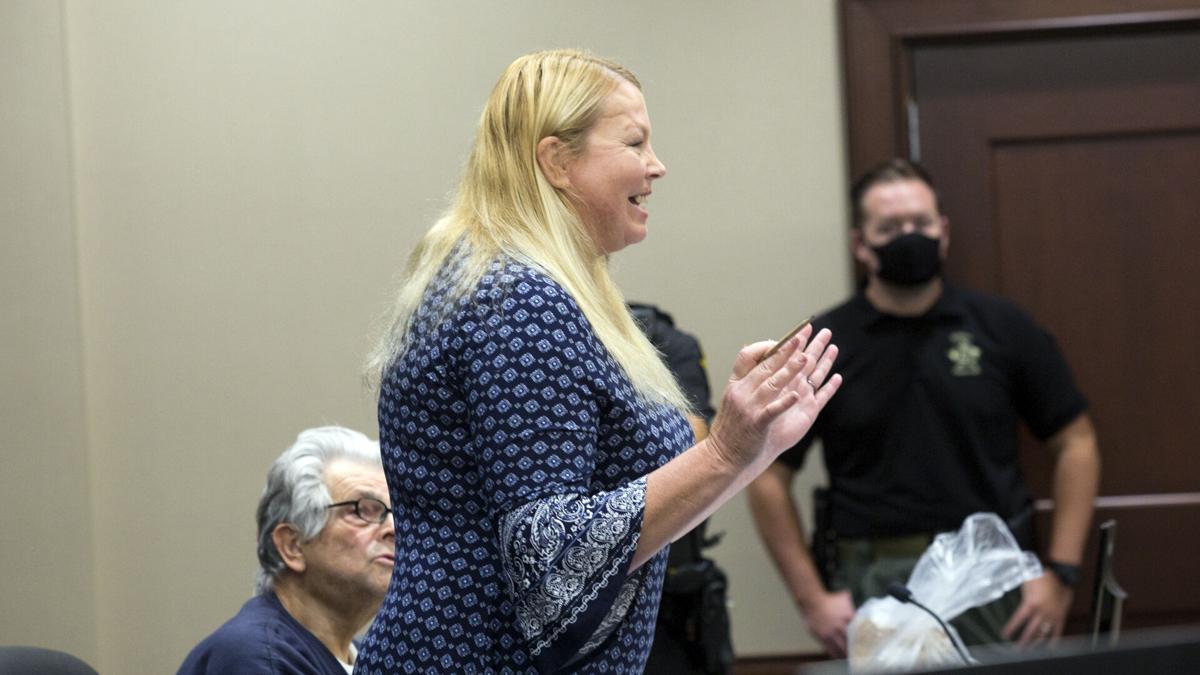 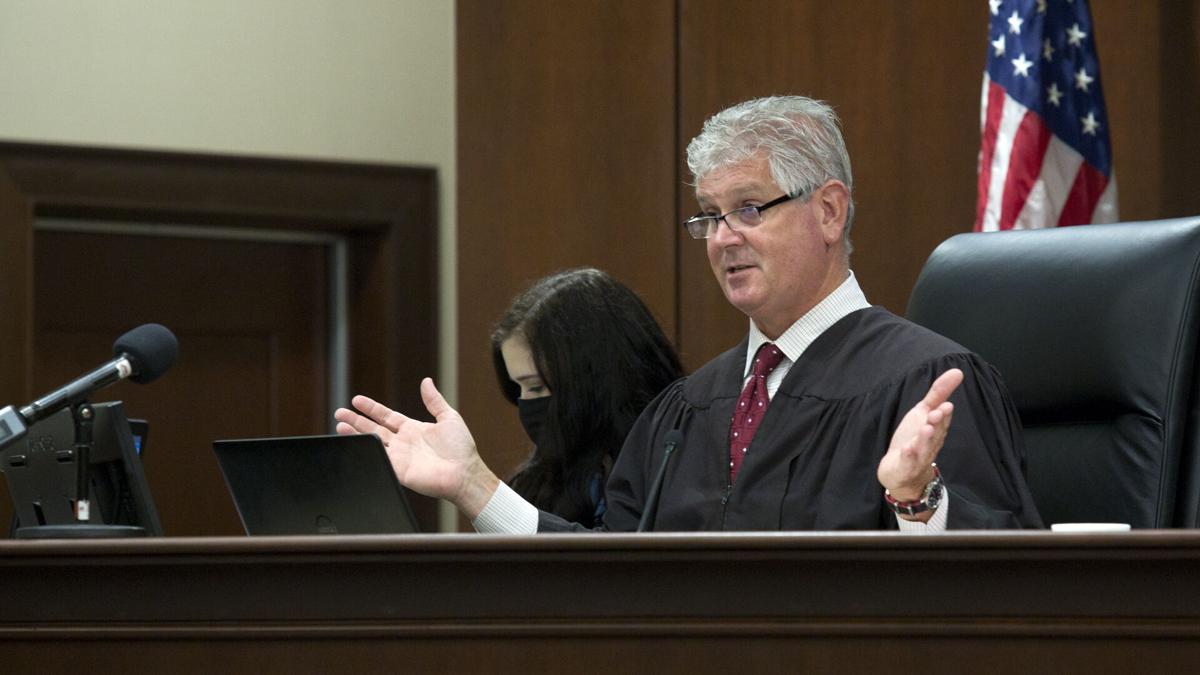 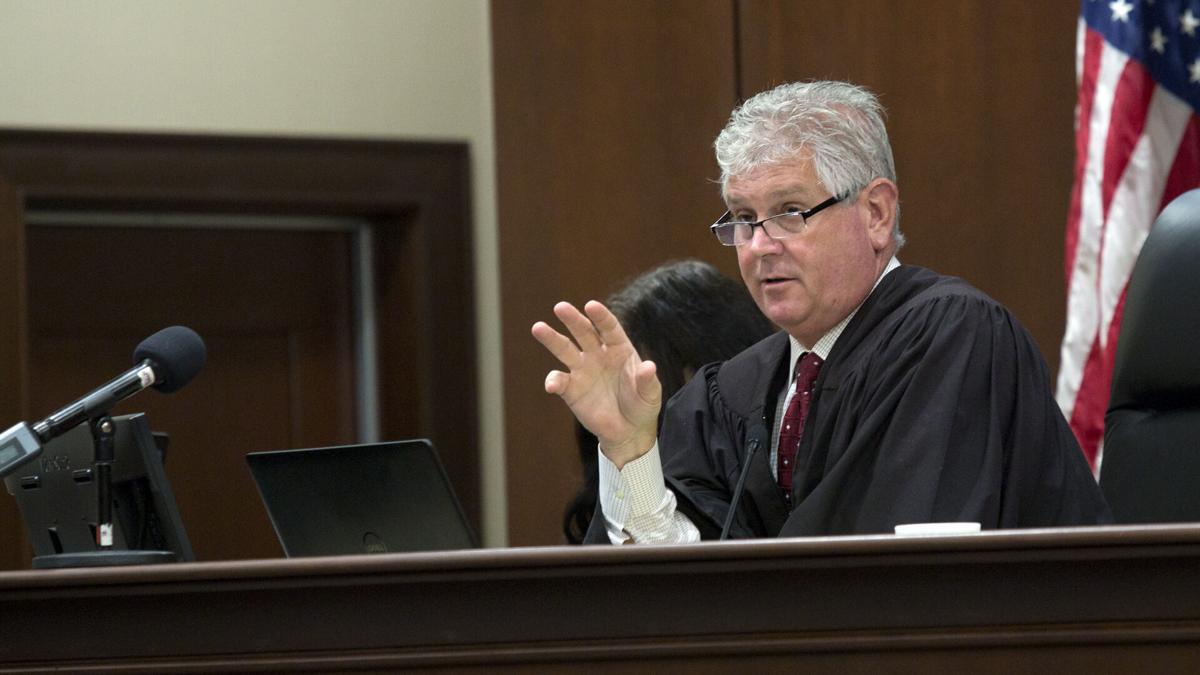 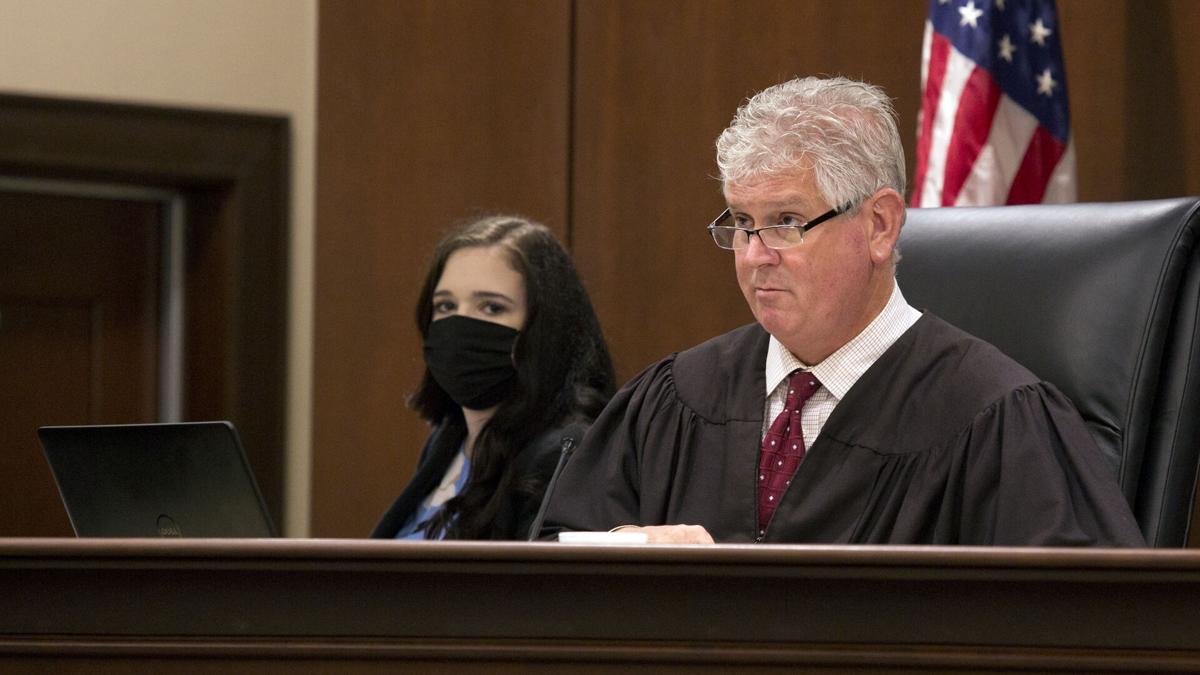 Clements spoke about the Hopkins’ divorce action at a hearing to reconsider Hopkins' application for a public defender Wednesday morning before Judge Eugene C. Griffith in Courtroom 3A of the Florence County Judicial Center.

Normally, the state does not get involved in the application of a defendant for a public defender. However, Clements and his office became involved when they listened to a recorded phone call between Fred and Cheryl Hopkins in October 2018.

Clements read part of the pleading to the court Wednesday.

That pleading alleges that the Hopkins' finances and assets were kept separate during their marriage and asks the court to divide the assets equitably and leave the assets of the marital estate to their children.

"At that time, your honor, we received information from the Richland County Sheriff's Office," Clements said. "Telephone conversations, as you know, in jail, they're all recorded. They were reviewing that and they [Cheryl and Fred] had a couple of conversations about how they were going to do this and fool the court."

Former Florence County Sheriff Kenney Boone called in the Richland County Sheriff's Department to investigate the Oct. 3, 2018, shooting.  The shooting happened when sheriff's deputies went to serve a warrant at the Hopkins home. A deputy and a Florence police officer died of their wounds. Five other officers were wounded.

Clements and his office filed a motion to intervene in the divorce action to prevent the alleged attempt.

Clements added that his office was not opposed to a court-appointed attorney if he met the eligibility for it, but as guardians of the county's resources, they reluctantly filed to intervene.

An unspecified family court judge granted the office's motion to intervene in the case.

However, Clements added that the case did not move forward, as Fred Hopkins was never served.

Griffith later expressed some disbelief at this, saying that as a family court attorney, Cheryl should know that the defendant needed to be served in the case.

Fred Hopkins confirmed Wednesday that he had never been served.

Columbia attorney Aimee Zmroczek, who represented Hopkins at the hearing, said Hopkins filled out the application for a public defender on Oct. 10, 2018.

Zmoczek added that a GMC truck listed on the application had been sold for a "couple hundred" dollars but otherwise the Hopkins' assets remained the same.

Hopkins later added that the vehicle had been destroyed and needed to be scrapped.

Former Judge Thomas A. Russo ruled that Hopkins was not eligible for a public defender.

Clements said that Russo found that Hopkins lived in a 5,000- to 6,000-square-foot home, that he and Cheryl had raised many children, and that Hopkins was essentially a "house husband," as Cheryl is a successful family court attorney in Florence.

Zmorczek alleged that Russo's ruling was made without considering all of the facts.

Griffith outlined that the home is held in a family trust between Cheryl, her mother and her brother and that Hopkins has no connection to the trust.

Clements later outlined the Hopkinses as the owner of several guns and two telescopes.

Hopkins mentioned owning coins when he spoke to Griffith but also added that he did not know where anything was.

Griffith implied that none of these assets was included on the form Hopkins filled out.

Hopkins filed a motion to reconsider that ruling, which led to Wednesday's hearing.

Zmorczek also made an oral motion to either be appointed or relieved as Hopkins attorney during the hearing.

Griffith ruled that he would ask Hopkins' daughter to prepare a financial accounting of his assets for the court to review before making a ruling on whether Hopkins met the qualifications for eligibility for a public defender.

He also ruled that Zmorczek could withdraw as Hopkins' attorney.

Zmorczek agreed to provide her entire file to Hopkins.

Zmorczek also said she came to be involved with the case through a meeting with Hopkins at the Alvin S. Glenn Detention Center near Columbia where Hopkins is being held pending trial and where she has several clients.

"Mr. Hopkins approached me," she told Griffith. "We talked about how they wanted to have him evaluated mentally. But, your honor, it's always been — and I said it back then on the record and I'll say it again — limited to helping Mr. Hopkins navigate this."

Zmorczek told Griffith that a capital crime trial would cost Hopkins at least $400,000.

Three candidates seek Seat 2 on Florence On Schools board

FLORENCE — Two challengers are seeking to replace the incumbent in Seat 2 of the Florence One Schools Board of Trustees in the Nov. 3 election.

Fred Hopkins looks through a book at a hearing Wednesday morning.