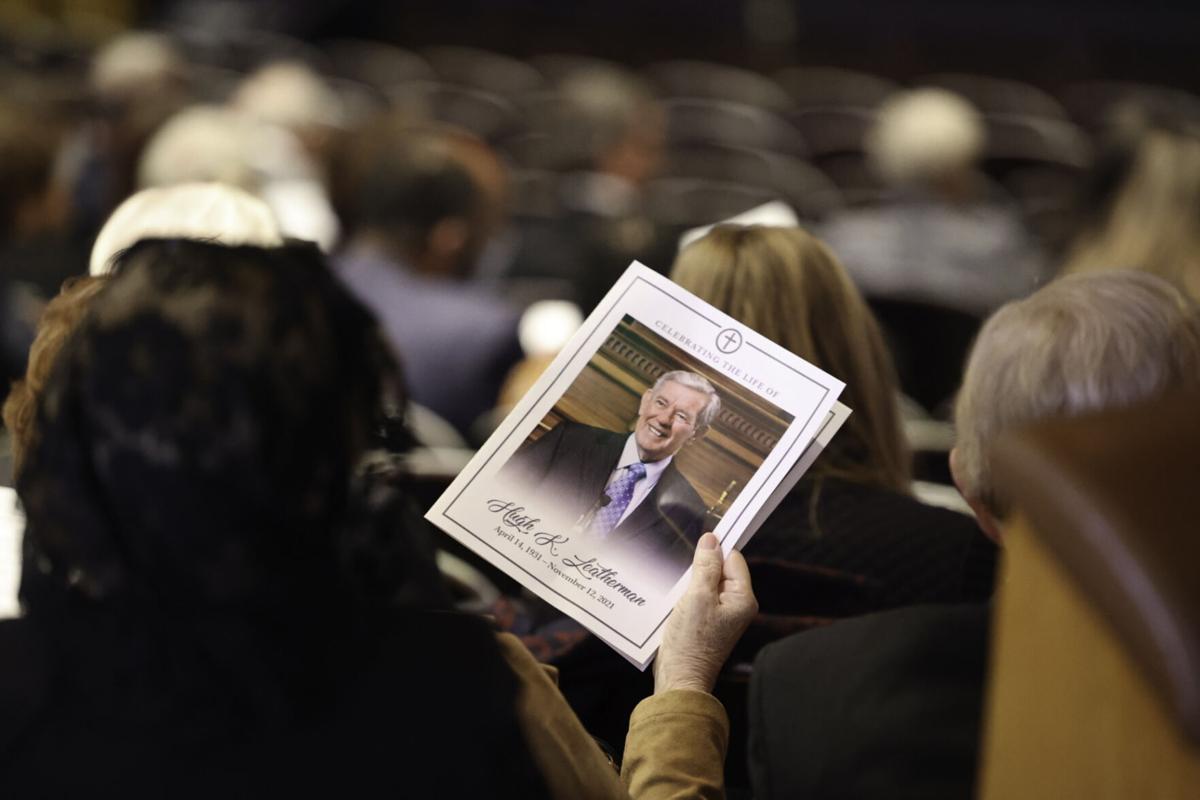 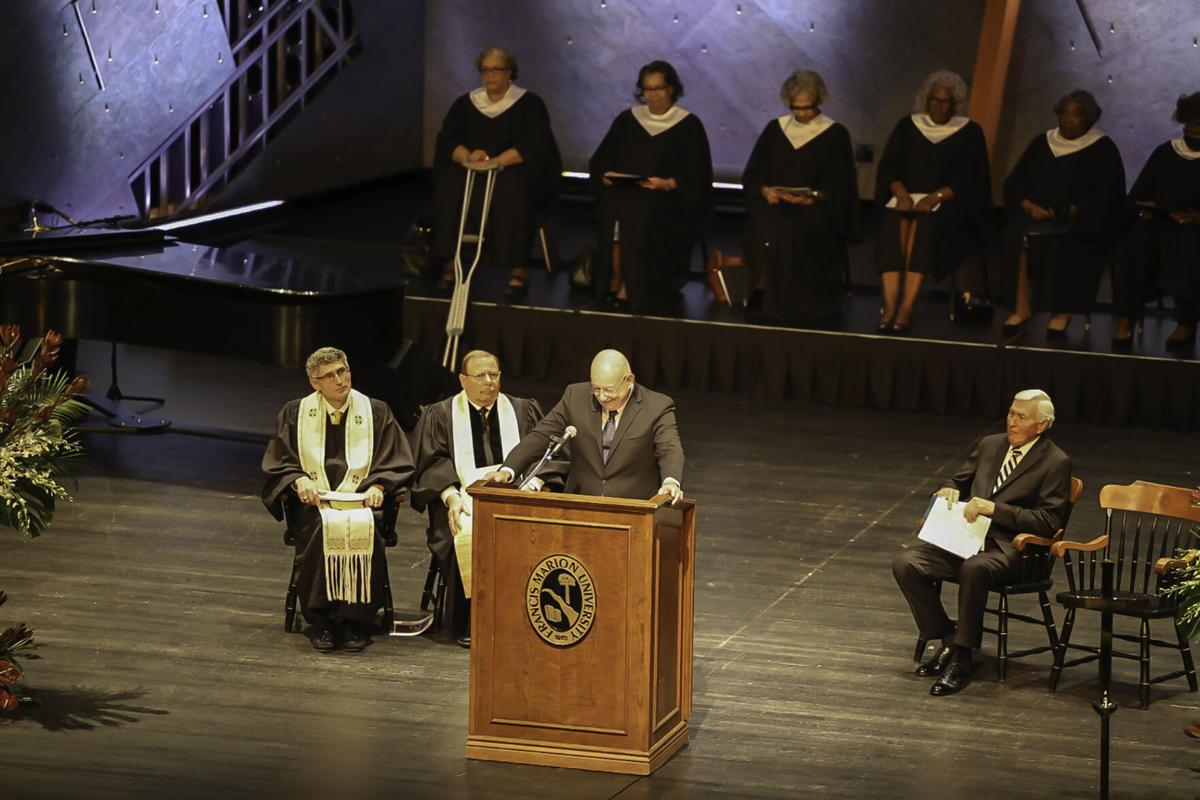 Carter shared the memory as he delivered the eulogy at the celebration of Leatherman’s life held Friday afternoon at the Francis Marion University Performing Arts Center. Leatherman died one week ago Friday after battling an inoperable cancer.

“One of my most cherished moments of his last two weeks was of Jean stopping by his chair in the living room,” Carter said. “With his eyes welling up, he reached over, took her hand, and said, ‘I love you more than life.’ He did, and he still does.”

“Jean was the nucleus, and so much that was magical in his life radiated from her,’ Carter said. “She was also his compass and rudder, as he often acknowledged. His staff discovered over the years that if you needed him to move off a firmly held position, you’d better recruit Jean to your side very early.”

He said that Leatherman was proud of each of his six children, Shelia, Ken, Karen, Lynn, Amy, and Sarah.

“He was the typically doting father,” Carter said. “If Jean was the compass, you were the anchors. He proudly discussed the advice that each of you offered him on various matters. He was pleased that you were such uniquely different people and yet so much a part of that core family that provided him love and comfort.”

“All of you, and the beloved grandchildren, were the safe harbor to which he returned time and time again to revitalize his body and heart — after a week, after a month, after a session — at the Statehouse. So much of the success that he achieved in public life developed from, and was nurtured by, your love and caring support.”

Carter added that the Leatherman family extended to the staff of the Senate Finance Committee that Leatherman chaired from 2001 until his death and to his business, Florence Concrete Products.

“Quentin, Mike, Robby, Diane, and his brilliant budget analysts – now and over the years,” Carter continued. “He regarded you as the finest budget team ever assembled, anytime, anywhere. You were so very talented and determined because you knew that in serving him so loyally, you were also serving the people of South Carolina faithfully. The people’s business was the chairman’s business.”

“To Sherry and our Florence Concrete friends, he was so very deeply appreciative of your partnership and commitment to that business. It also provided him the one venue where he could still be a practicing engineer, a role that he dearly cherished. It may have driven you a little crazy from time to time, but it meant the world to him.”

Carter called the people of the Pee Dee the second pillar of Leatherman’s life.

“He loved folks from rural communities, and they loved him right back,” Carter said. “He would work a chicken bog table by table, his shirt sleeves rolled up, his famous suspenders on display. He would shake constituents’ hands, meet their eyes, and let the conversation go wherever they wanted to take it. He wasn’t going to be hurried, and neither were they.”

He said that trying enjoy a meal in public with Leatherman was an impossibility because Leatherman was constantly being approached by friends, neighbors and acquaintances that wanted to talk.

“He was always attentive to their problems and concerns,” Carter said. “The Chairman was never a “call me Monday at the office” type of leader. He’d put down his fork and listen attentively. When some of us would chide him afterward for the interruptions, he’d remind us that state government was always open — so he needed to be too.”

Carter said that Leatherman did not maintain a secret cell phone number.

“Everyone in the district and most of the state had it. And he’d always answer because he believed in being available,’ Carter said. “He believed in living a life of service every single day, including weekends and holidays.”

He said the third pillar of Leatherman’s life was the South Carolina Senate which he said Leatherman loved with every fiber of his being.

“He ran for governor once and considered it the biggest political mistake of his life,’ Carter said. “No disrespect, Gov. McMaster, you know the strong admiration that he had for you. But after the ‘86 election, he understood clearly that everything he wanted and needed resided within the Senate. He cherished the institution, its traditions, procedures, and rules — especially that seniority rule.”

Carter said that Leatherman would frequently smile and remind those around him that the sun will up again tomorrow morning.

“It has, although it is not quite as bright as it was,’ Carter said. “The region has lost an iconic leader, and many of us have lost our dearest friend. He brought a substantial amount of state funding here, but, more important, he educated us on the necessity of doing things for ourselves. If we do what he taught us and work together with respect, tolerance, and patience, we’ll do just fine in the years ahead. Florence and the Pee Dee will continue to grow and prosper. That was Hugh Leatherman’s fondest hope and that’s the legacy he deserves.”

Carter began the eulogy by providing an overview of Leatherman’s life.

“As so many of us know, his story resides at the very core of the American dream,” Carter said. “A young man grows up on a poor farm in Lincoln County, North Carolina. Through sacrifice and ingenuity, he makes it to the state’s land grant university [North Carolina State], the first in his family to do so.”

Carter said Leatherman chose to major in civil engineering, graduated, got a job, got tired of making money and decided to start his own business, Florence Concrete Products.

“Eventually, he considers running for elected office; first the Quinby [Town] Council [in 1967], and then the Senate of the state of South Carolina,” Carter continued. “Forty-one years later, he’s become one of the most influential and successful elected leaders in the state. A simple Horatio Alger story? Not at all. Nothing about Hugh Leatherman was mythical, and his story was as complex as the man.”

Carter said Leatherman had an amazing intellect, a tremendous reservoir of compassion, humbleness and a desire not to make permanent enemies. He added that Leatherman had the ability think broadly and boldly and to help others understand the problems they had better.

“The chairman was a remarkable legislator who became the state’s consummate problem-solver. Sure, he was a savvy politician, but he used politics as a means of formulating some of the state’s more meaningful policy — in infrastructure, economic development, education, higher education, trade and international investment, health care, workforce development, and so on and so on. No one better understood the nexus between politics and policy, and no one was more shrewd strategically at applying it.”

The Rev. Will Malambri, former associate and senior pastor at Central United Methodist Church, the church Leatherman and his family attended, preached the sermon.

He said he was working as a camp counselor at Wofford College when a co-worker told him that Leatherman’s daughters would be coming to the camp the next week. Malambri said that after being told the same thing twice more, he started asking questions and learned that Leatherman was a state senator.

“I began to imagine when the limo arrived and the entourage would be a presence ... how they would scour the camp just the make sure everything is just right,” Malambri said. “Up came a family car with just the family; they carried in the girls’ things. And as was promised, they were good, sweet, normal campers.”

He said he remembered that when he became a pastor at Central United Methodist Church.

“I saw Sen. Leatherman coming toward me, I stuck out my hand, ‘Hello, senator,’” Malambri said.

‘That made an impression on me,” Malambri continued. “It took a while but I finally got to where I could say that. I understood it was a church thing. Hugh didn’t want his public service to inhibit his faith life.”

His sermon also featured the 14th chapter of the Gospel of John in which Jesus helps his disciples understand that he must die so that he can be born again and offer those who believe in him the gift of the Holy Spirit.

The service also featured scripture from Psalm 23 and Revalation 21:1-5,

The Rev. Jimmie Harley delivered the word of grace and a greeting.

The Trinity Baptist Choir performed the recessional hymn, “I’ll fly away.” They also performed “Shall we gather at the river” and “Great is thy faithfulness.”

Nick Townsend sang “Turn your eyes upon Jesus” at the beginning of the service and “I did it my way” before the benediction.

WH: Omicron variant found in 20 countries, not US

WH: Omicron variant found in 20 countries, not US