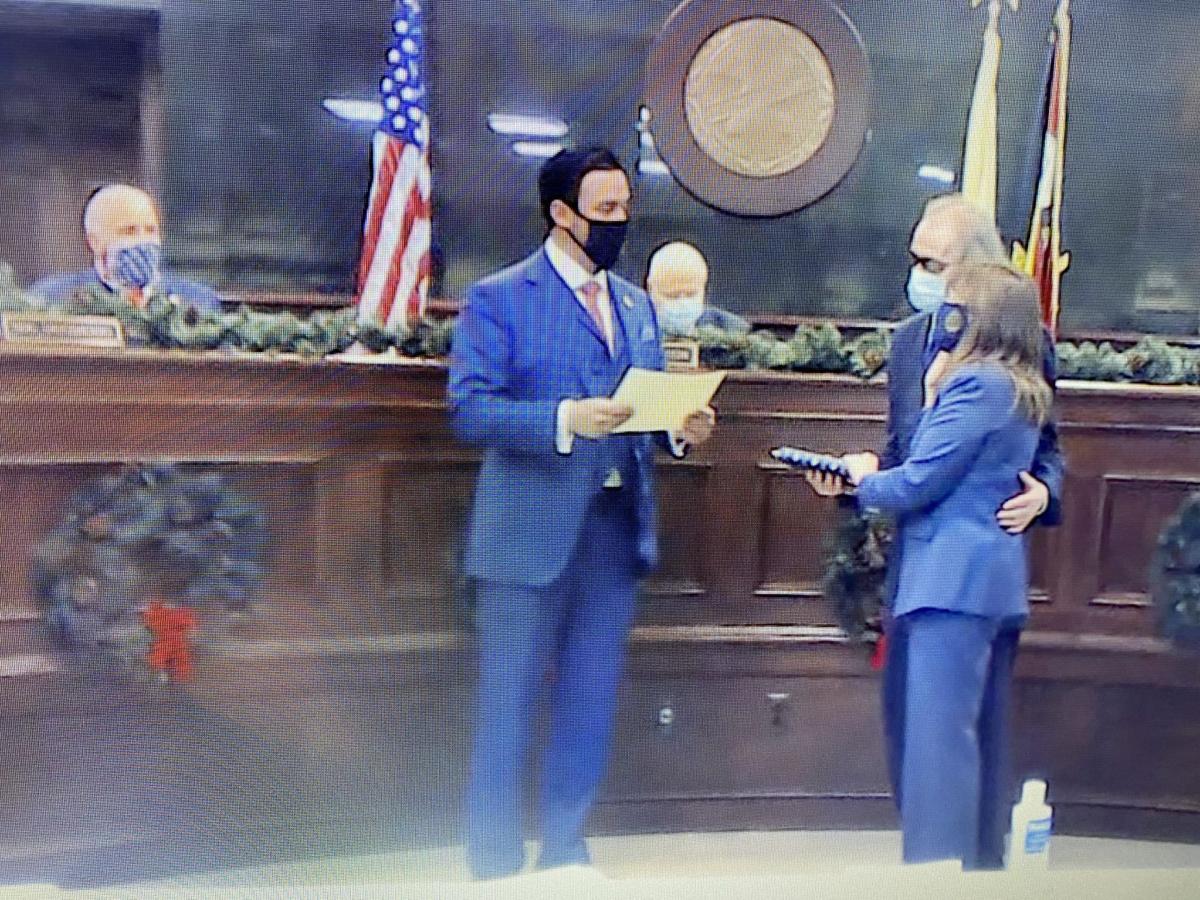 State Sen. Michael Testa administers the oath of office to Cape May County Clerk Rita Rothberg on Wednesday. Rothberg, who ran for office as Rita Fulginiti but changed her name before the start of her new term after marrying Michael Rothberg, ran unopposed. 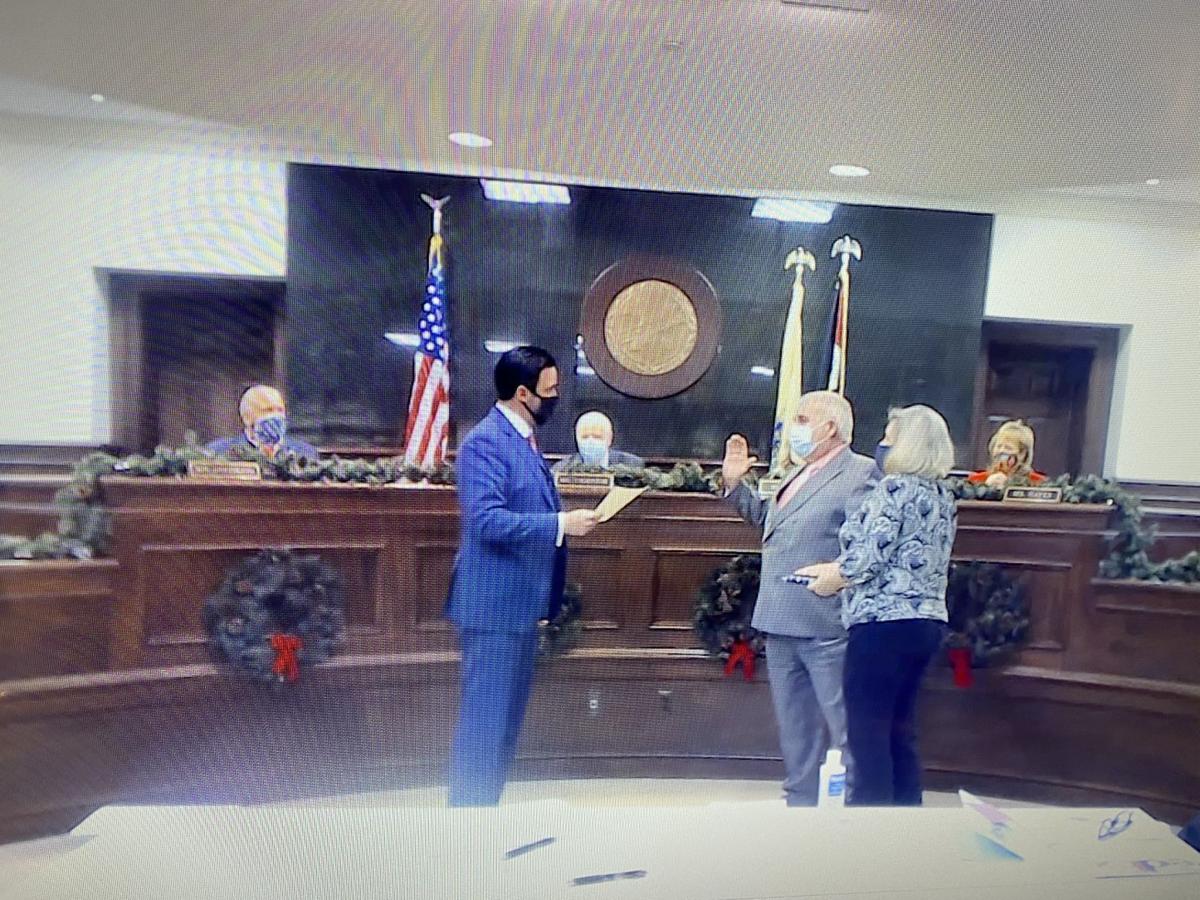 State Sen. Michael Testa administers the oath of office to Sheriff Robert Nolan, who ran unopposed and was sworn in for a new term Wednesday night. 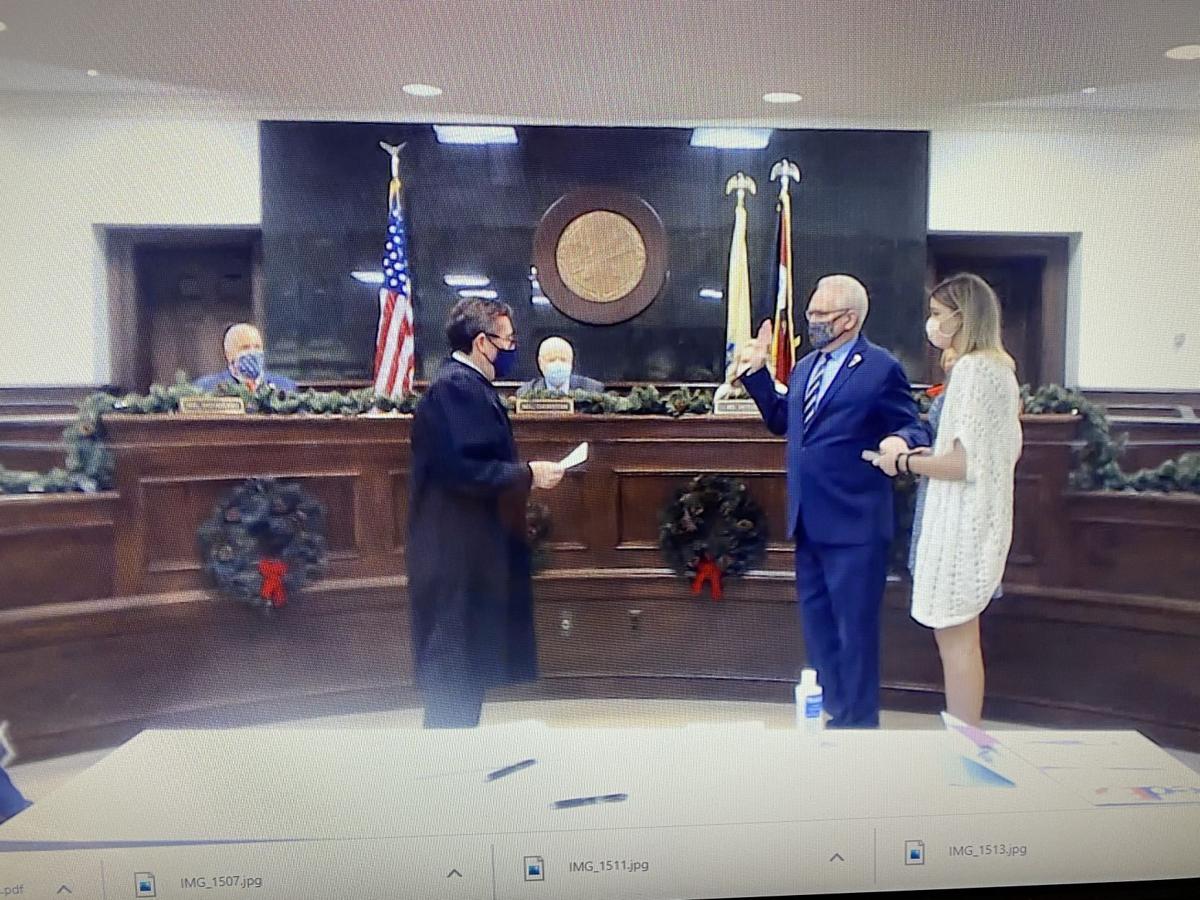 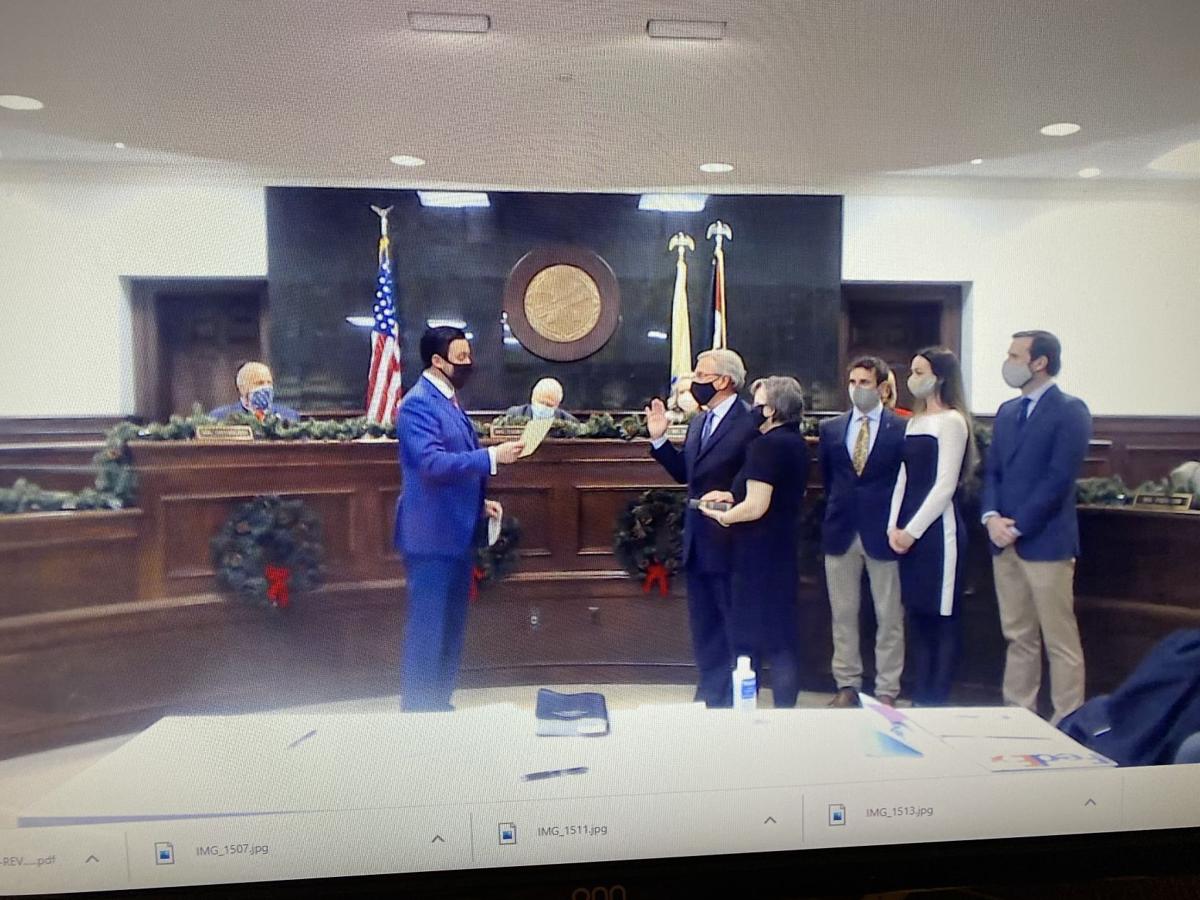 State Sen. Michael Testa administers the oath of office to Commissioner Will Morey, who was reelected in November over Democratic challengers, keeping the board entirely Republican.

BILL BARLOW For The Press

CAPE MAY COURT HOUSE — Cape May County government welcomed Kevin Lare as the new acting county administrator and two returning members at a reorganization meeting Wednesday, as members adjusted to the change from being called freeholders to county commissioners.

“It’s really kind of exciting since 1792 to have a different title here,” Commission Director Gerald Thornton said. One of the members jokingly asked if he was there at the time. Thornton also congratulated the successful candidates on a “well-deserved” reelection.

Most of the officials at the meeting accidentally said “freeholder” instead of “commissioner” at least once.

Family members and the legislative team of state Sen. Michael Testa and Assemblymen Antwan McClellan and Erik Simonsen attended in person at the county administration building, but members of the public could only attend through a livestream presented through the county website.

Incumbents Will Morey and Jeffrey Pierson each won reelection in November, keeping the county government entirely Republican. Sheriff Robert Nolan and County Clerk Rita Rothberg each ran unopposed and were sworn in for new terms. Rothberg ran as Rita Fulginiti but changed her name before the start of her new term after marrying Michael Rothberg.

On Jan. 1, Joseph Vicari will take the oath of office for his 14th term in Ocean County government, and his first as a county commissioner.

Testa presented both Rothberg and Nolan with special recognition at the meeting. He said Nolan is the county’s 100th sheriff.

The meeting had a lighthearted tone, although there was extensive discussion of major events, including COVID-19 and the national vote. Little was said, however, about the biggest news of the day, when supporters of President Donald Trump stormed the U.S. Capitol in an attempt to stop the certification of Democrat Joe Biden’s election win.

“I think it’s really important that we recognize the importance of elections and the integrity of elections,” Thornton said, adding it has never been more important than it is now, after seeing what was happening around the nation.

Election officials around the country have determined there were no major issues with the vote in 2020, and both federal officials and courts have rejected claims of widespread voter fraud.

Pierson mentioned that when he was sworn in to county government three years ago, there was a massive snowstorm. The county attorney came to his house to administer the oath in his front room, which he believes was the first time the reorganization meeting was delayed.

BRIDGETON — Joseph Riley was an unusual physician who somehow found time to be involved in politics and help bring an osteopathic medical school to New Jersey, while delivering babies at all times of day and night.

“I look at tonight; there’s cause for celebration, there’s cause for stress. I look at things going on in the Capitol right now that are pretty concerning,” Morey said Wednesday night. COVID-19 has also been stressful but has “shown who we are,” he said, “and in the meantime, we’ve got to try to keep the county advancing.”

Morey spoke about the county’s long-term plans, including the eventual replacement of the toll bridges operated by the county Bridge Commission, which for years have been described as in troubling condition.

He also praised the county’s work during the pandemic, both in fighting the disease and in working on plans to reopen businesses and protect the local economy.

Lare had been the county finance and purchasing director. He was first hired for a part-time job in that department in 2015, while serving as the deputy mayor of Lower Township. Before his election to Lower Township Council, Lare served on the West Cape May Board of Commissioners. The administrator job pays $133,705 a year, according to county officials.

He was officially appointed to the job in December, with the appointment taking effect in January.

Recycling in South Jersey, as in much of the world, is adjusting to a new, costlier normal: China no longer wants our trash.

He replaces Michael Donohue, who was named county administrator earlier in 2020. As Thornton described it, Donohue rescued the county when it was in need of an administrator. The retired Superior Court judge served as chairman of the county Republican organization before being elevated to the bench. He returned to the chairmanship after stepping down as a judge in March after four years.

Thornton praised both Donohue and Lare at the Wednesday meeting.

Thornton has spent decades in county government and is by far the longest serving member currently on the board. Commissioners voted Wednesday to return him to the position of director of the board, but Commissioner E. Marie Hayes and Morey abstained. Hayes said she believes the board should sometimes change leadership to avoid stagnation.

“The director and I spoke about my opinion, and it was agreed that the subject will be discussed by the board in the upcoming year,” Hayes wrote the next day in an email. She said it was not an indictment of the board’s accomplishments over the past year.

Morey did not respond to a request for comment.

Earlier in the meeting, Hayes requested the moment of silence that begins the meeting after the Pledge of Allegiance be dedicated to Ronald Grunstra, a resident of Ocean City and an Air Force veteran who died recently from complications related to COVID-19. He was 84.

The moon's phases may be affecting mankind's sleep

The moon's phases may be affecting mankind's sleep

How inhaling ozone harms your health

How inhaling ozone harms your health

Get Government & Politics updates in your inbox!

Stay up-to-date on the latest in local and national government and political topics with our newsletter.

Cape May County investigating antigovernment group’s use of public property

CAPE MAY COURT HOUSE — Among the tangled mix of QAnon images and Confederate, Trump and Gadsden flags emblazoned with “Don’t Tread on Me” carried or worn during the Capitol riots in Washington, D.C., on Jan. 6 were multiple “Oath Keepers” patches, often with a chapter location.

Gov. Phil Murphy tweeted out the state's latest COVID-19 data on Thursday, as a reminder to restrict visiting over the holidays to stop the spread of the novel coronavirus.

MIDDLE TOWNSHIP — The new Cape May County veterans outpatient clinic is officially open, capping a years-long effort to move away from the old site at the Coast Guard base in Cape May.

State Sen. Michael Testa administers the oath of office to Cape May County Clerk Rita Rothberg on Wednesday. Rothberg, who ran for office as Rita Fulginiti but changed her name before the start of her new term after marrying Michael Rothberg, ran unopposed.

State Sen. Michael Testa administers the oath of office to Sheriff Robert Nolan, who ran unopposed and was sworn in for a new term Wednesday night.

State Sen. Michael Testa administers the oath of office to Commissioner Will Morey, who was reelected in November over Democratic challengers, keeping the board entirely Republican. 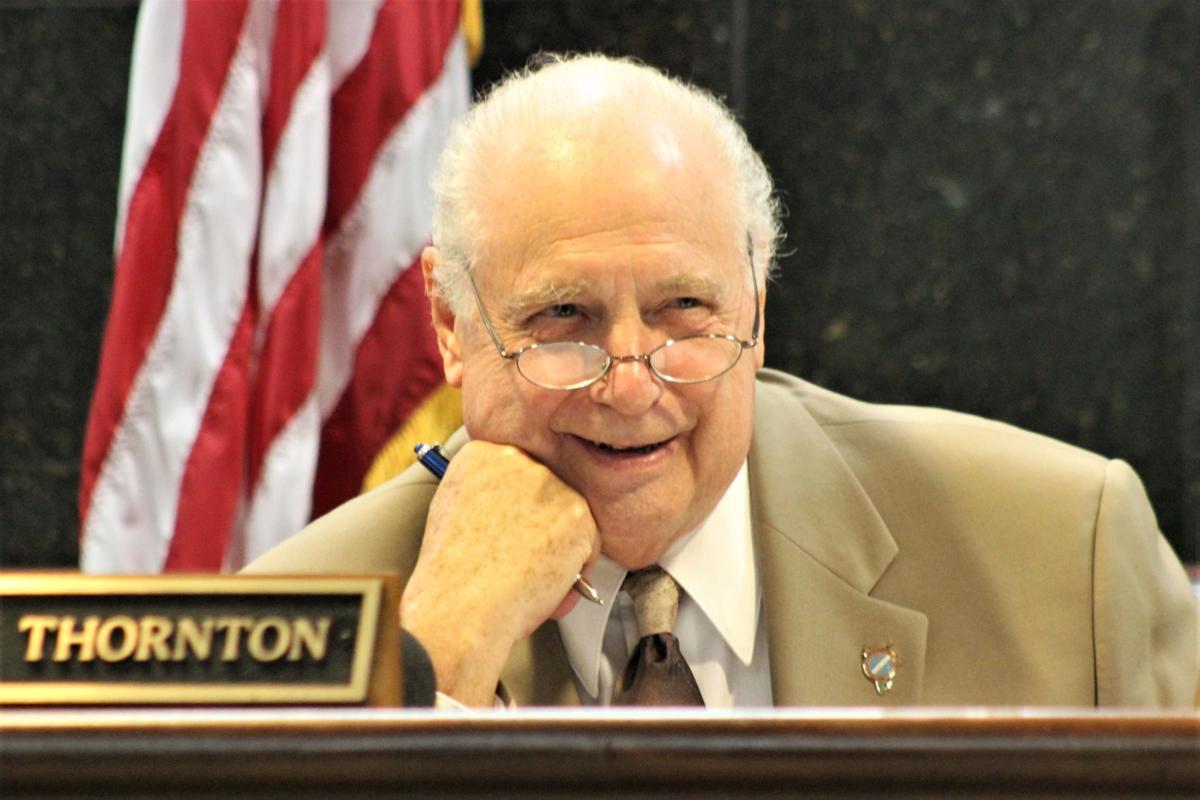