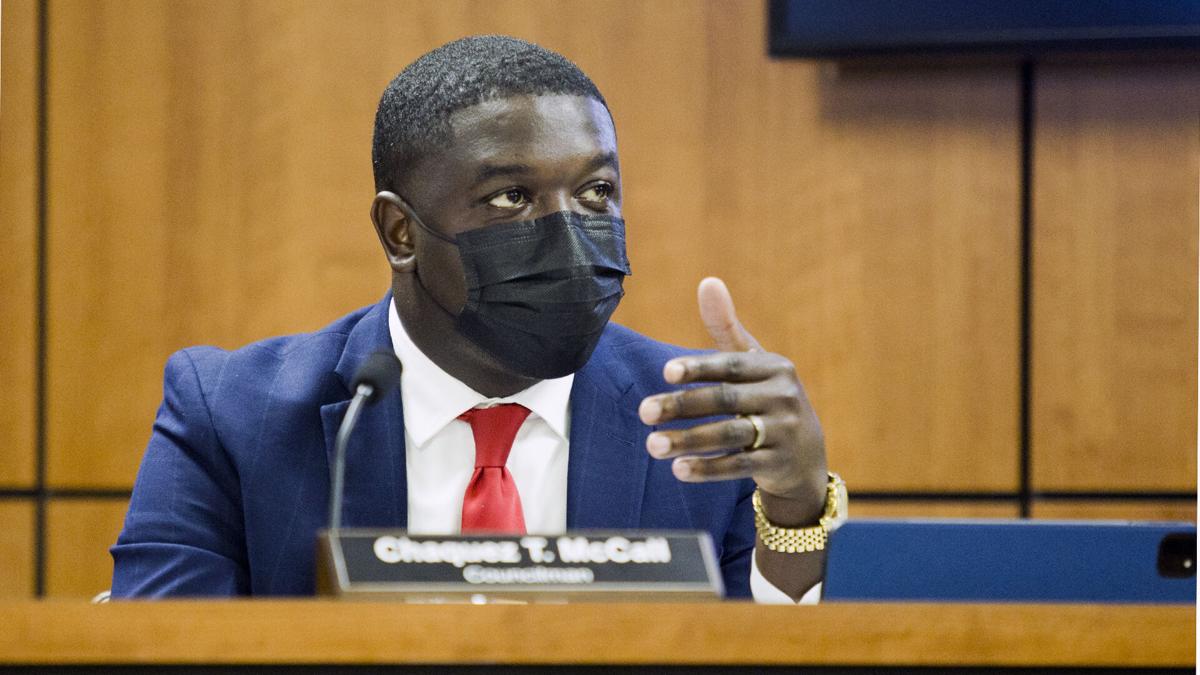 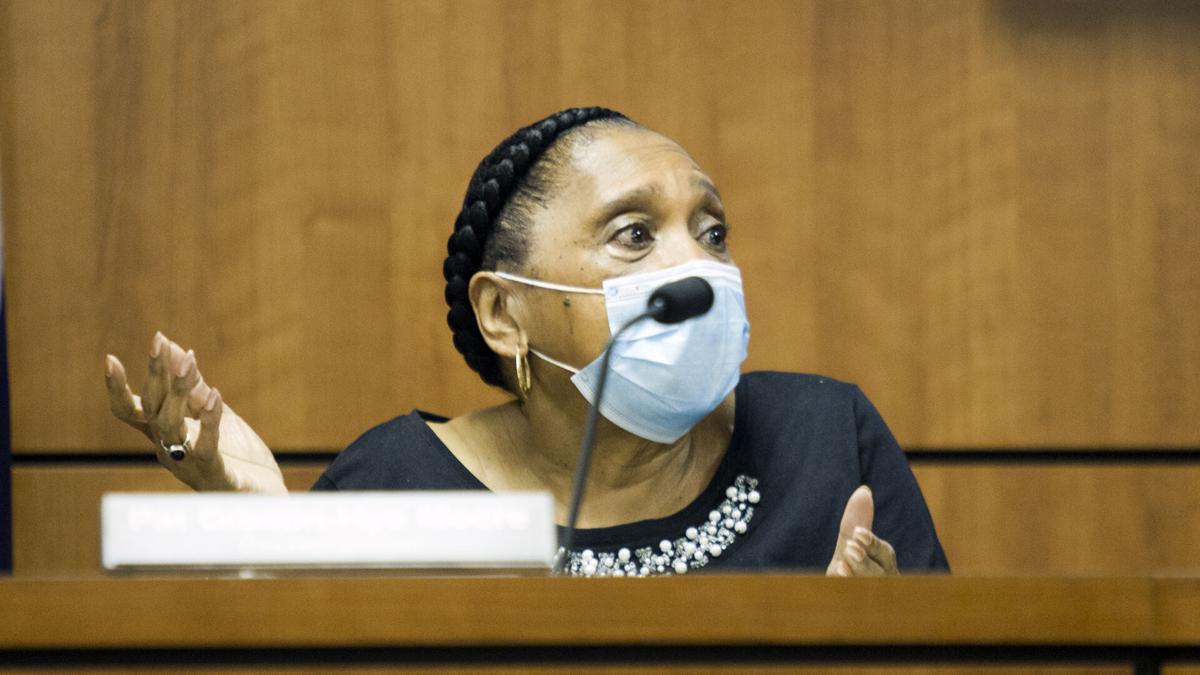 She said she remembered something very similar happening when several new members came onto the council in 2008 and 2010, indicating that the City Council was experiencing growing pains as they learned to work together.

Four of the members, Lethonia “Peaches” Barnes, Chaquez McCall, C. William Schofield and Bryan A. Braddock, are new to the council. Barnes and McCall were elected in November 2020 and took office shortly thereafter. Braddock, who ran against Myers Ervin for mayor, and Schofield were elected in March and took office shortly thereafter. And two additional members are in new roles: Myers Ervin as the mayor and George D. Jebaily as mayor pro tempore. Myers Ervin was elected mayor over Braddock in the general election and the Democratic nominee for the position over Jebaily and Barry McFadden.

The latest growing pains occurred Monday when the City Council discussed the rezoning of a property at 257 N. Coit St. that was zoned residential despite a commercial character.

The discussion over the rezoning request took 27 minutes and required Myers Ervin to twice stop members from talking out of order.

Chaquez McCall and Pat Gibson-Hye Moore were the two members accused of talking out of order.

McCall asked several questions of Dudley before stating that properties zoned incorrectly in the new zoning code implementation would likely have several property owners asking for the same thing. He implied that it would be difficult to justify asking the same questions each time a property owner asked to rezone.

Then, Myers Ervin asked Dudley if the property could still be used as a restaurant, Dudley answered that it could not and then McCall tried to speak again.

“Chair recognizes Councilwoman [Gibson-Hye] Moore,” Myers Ervin said. “I recognized you, you had the floor, you gave the floor up. Now, I’m giving it to the council members in the order [that I said previously.]”

McCall then tried to speak again.

“But you’re arguing against me and then going to,” McCall said.

Moore’s out-of-order moment came less than two minutes after McCall’s after Councilman Bryan Braddock said he had a problem with the incorrect zoning because at least two of the homes near the property were in a state of “extreme” disrepair and he couldn’t imagine anyone living there.

“I know I’m out of order but I’m going to say it anyway,” Moore said.

The council eventually voted 6-1 to approve the rezoning request. Gibson-Hye Moore voted no.

But that wasn’t the only moment of testiness at the meeting. There was also a squabble between Myers Ervin and Clamentine Elmore, executive director of the Florence Housing Authority, over a letter that Elmore says the authority needs to move forward to sell its soon-to-be-former headquarters at 400 E. Pine St. and Myers Ervin refusing to do so without more definitive information on the plans for the building.

As a matter of fact, there have been a few of those moments at recent City Council meetings.

In May, there was a clash between Myers Ervin and Lethonia “Peaches” Barnes over the creation of three committees and appointments of chairs of those committees.

Myers Ervin accused Barnes of failing to communicate with her over Barnes’ plans to make a motion for the creation of the committees. Barnes said she felt she had already communicated with Myers Ervin because the matter was discussed at a City Council retreat.

The clash continued over the next agenda item: Myers Ervin’s appointments of herself, Gibson-Hye Moore, and William Shofield to serve on a city-county conference committee.

Barnes immediately questioned the appointments, asking why she was not appointed to the committee. She said that her brother, Florence County Councilman Al Bradley, was the chair of the county council’s delegation and that he had asked for her to be on the committee specifically.

Myers Ervin said later during the discussion that she had previously served on a similar committee and would like to continue to do so, that Gibson-Hye Moore had asked to be on the committee and that Schofield would be a good addition because his father was on the county council before he died last year. She also added that Schofield was a member of the minority party on the city council, the Republicans, and that the County Council currently has a six to three Republican majority.

Barnes said she had communicated with Myers Ervin about being appointed to the conference committee prior to the meeting.

Myers Ervin disputed this. She alleged that Barnes had only said that her brother had asked her about the status of the city’s appointments and did not ask to be placed on the committee.

There have also been several lengthy discussions over issues, most recently a proposed masking ordinance, votes with dissents, usually five to two with Myers Ervin and Gibson-Hye Moore being the two, and executive sessions that have gone for several minutes.

Barnes, McCall, Schofield and Bryan Braddock also said that the situations are growing pains for the council.

Myers Ervin said she wanted to assure the residents of Florence that she and the Housing Authority were working toward a solution for the property.

She also provided the Morning News with copies of two letters: one written by Elmore saying that Myers Ervin supported the unspecified disposition of the 400 E. Pine St. property and one acknowledging that they had met to discuss the property.

“Becoming one is challenged like every relationship, no one person can have it their way,” Barnes said. “It’s a team it’s not one person. We are challenged to become one. While I believe that we will do it, but there’s give and take on all parts. I think we’re learning one another.”

“Egos are in the way of common-sense solutions to progress the city of Florence forward,” McCall said. “Once people put their egos aside, we’ll agree on how to move the city forward.”

He also said that he felt there were similar instances in 2008 when former Mayor Stephen Wukela and Councilwoman Octavia Williams-Blake took office.

Braddock and Schofield also mentioned that the council has faced several controversial topics in recent meetings.

Jebaily declined to comment. He also said that he did not feel there was a story to be written on the topic.

Gibson-Hye Moore said she knew she was out of order but felt she had to say something, so she did. She also declined to comment on all the other situations.

FLORENCE, S.C. – The leader of the Salvation Army in Florence said that recent reports of two of its guides on racism took the guides out of context.

TIMMONSVILLE, S.C. -- One person died Saturday night in a single-vehicle crash in the Timmonsville community of Darlington County.

FLORENCE, S.C. -- An unattended candle early Tuesday morning started a fire and left a family homeless heading into the holidays.

FLORENCE, S.C. -- More than 180 runners competed Thursday in the Florence Turkey Trot 5K -- one of the fastest races run this year.

FLORENCE, S.C. -- The Second Annual 2021 Gift Market at the Florence City Center Farmers Market was a success, at least if you measure it by marshmallow consumption and wreath sales.

FLORENCE, S.C. -- Florence Police are looking for a suspect with outstanding arrest warrants connected to three "collision scam" incidents that took place Nov. 9 and then another on Nov. 29.

FLORENCE, S.C. – Mike Reichenbach will be running for the Republican nomination in the Senate District 31.