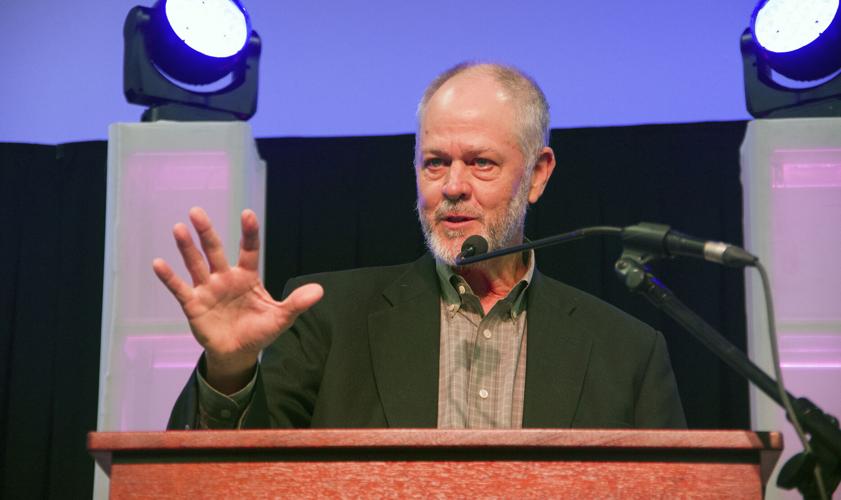 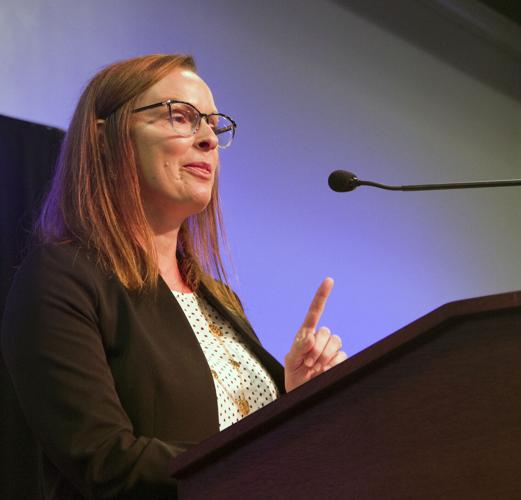 Amber Sellers announces the Greater Florence Chamber of Commerce’s Business Person of the Year during the organization’s annual luncheon at the Florence Center. 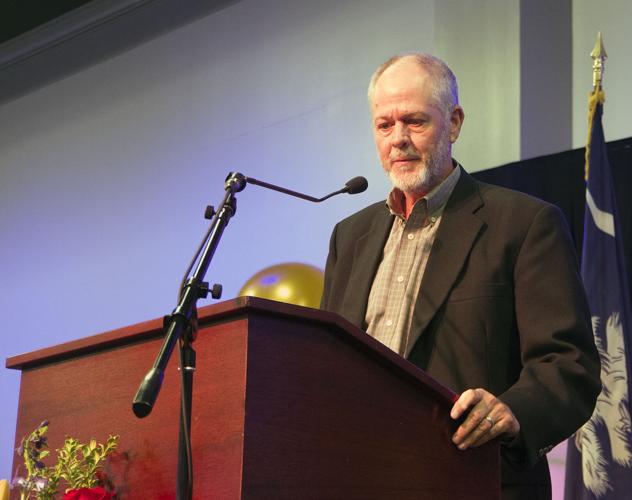 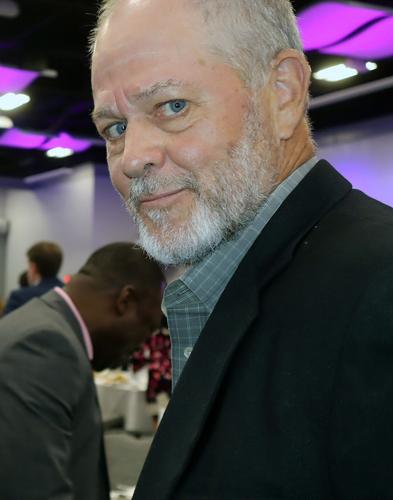 The Greater Florence Chamber of Commerce 2022 Business Person of the Year iJames Marvin Owen was surprised with the honor on Wednesday at the chamber’s annual Membership Luncheon at the Florence Center.

Owen is one of the owners of ACS. He is president emeritus and chairman of the ACS Board of Directors. Owen has worked for 39 years in service not only to the clients of ACS but also to its employees.

Owen said he has not earned this honor alone. He said this award is a reflection on all of ACS’s nearly 400 employees.

As he came to the podium to accept the award, Owen said, “Wow. Wow … I am humbled and honored by this. This is totally unexpected.”

He said it is overwhelming.

“We serve churches. That was the original vision. What a blessed career being able to do that with this group of people,” he said. “If you are sitting here and you attend church, which I hope you do, you are in our data bases so if you are behind on your pledges don’t make me call you out.”

Owen said one out of every five people in America is in an ACS church data base. He said the first client was First Baptist in Spartanburg.

He said people all over the country know about Florence through ACS.

“We persevered through the early years,” Owen said.

ACS Technologies is headquartered in Florence. The company provides technology solutions and services to the faith-based Christian market. It has about 400 employees across 26 states and supports nearly 20,000 churches across the country. Owen said many of their employees now work from home.

ACS Technologies has been named one of the Best Places to work in South Carolina by the State Chamber of Commerce.

Owen said in the beginning they questioned whether a company such as theirs could last in Florence. He said they went to a workshop where the speaker said you needed a city with about 40,000 people and a local college to succeed. Owen said Florence was a fit.

Owen said he started college with the idea of following in his father’s footstep and becoming a doctor. But when he came home for Christmas his first year, his father encouraged him to spend some time with him at work to find out if that was truly what he wanted to do. Owen said as an 18-year-old it took seeing a few deliveries, a C-section and a hysterectomy for him to change his mind.

“It was a message from God; you do not want to do this,” Owen said.

He returned to Furman University and changed his major to computer science/mathematics.

Owen said he has had a blessed career with good people at his side.

In making the presentation, Amber Sellers, commercial relationship manager of Wells Fargo, said Owen’s first job was with the Computer Consulting Division of Arthur Anderson in Charlotte. Those four years would provide valuable experience as he made the move in 1983 to a new start-up – Computer Dimensions – in Florence.

“I am told he must have had strong negotiating skills to have convinced his wife with their young son and their newborn daughter to move to Florence,” she said. “Hired as a computer programmer, he was one of only a handful of employees at this newly formed church software company, which would later become ACS Technologies.”

Sellers said Owen was named president of ACS in 2008. Under his leadership and through the efforts of each and every employee, this company has become a national leader in information management solutions and software for churches.

She said Owen has led ACS through difficult, tough years, as well as strong and prosperous years.

“The way thousands of churches are able to handle online pledges and giving in their software is because of his vision, design and implementation,” she said.

“Customer service and company culture have always been vital elements of his daily work ethic,” Sellers said. “He is highly respected within the company, and throughout the entire industry.”

Sellers said employees describe him as a “father figure” for so many, with a “genuine care and concern for people. He often provides a voice of reason and is an excellent problem solver.”

She said Owen has a servant’s heart and has demonstrated that many times through his dedication and support of the Florence community.

He has been a member of the McLeod Foundation Board of Trustees since 2012 and is the treasurer. He is on the executive committee of the Manor board and is the board secretary. He is chairman of the development committee for the board of Habitat for Humanity and also serves on the Furman University Alumni Board.

He and his family are members of Central United Methodist Church and have served the faith community in Florence for almost 40 years.

Owen spent years coaching his son’s baseball and his daughters’ softball teams and has now graduated to coaching his grandchildren.

Owen is a native of Florence. He is one of four children. He has three sisters. His father was an OB/GYN and his mother a retired nurse and stay-at-home mom.

Sellers said Owen’s childhood was pretty typical for a boy in a small Southern town, backyard games and neighborhood friends playing sports, especially baseball and basketball. He was a Boy Scout, and he followed in his father’s footsteps and became an Eagle Scout.

Sellers said Owen’s father also instilled a love of music in his children, which led to him playing the oboe in the school orchestra, Brevard Music Camp and being in the orchestra pit for several Florence Little Theater performances.

“He will tell you he credits playing the oboe with even getting him into college,” Sellers said.

He earned his bachelor’s degree at Furman University, graduating in 1977. He played a variety of intramural sports in college and was named manager of the year. His intramural group, the Million $ Men, have continued to meet for homecoming events throughout the years.

Owen is an avid golfer and was honored by ACS at his “retirement” with an endowed golf scholarship to Furman University.

After his undergraduate studies, Owen obtained his master’s degree at the Babcock School of Business at Wake Forest University.

He met his wife, Beth Ann, during their freshman year at Furman. They have four children: son Chris and daughter Claire in Jackson, Wyoming, and daughters Courtney in New Orleans and Kristen in Florence, who also happens to be an ACS employee. Their eight grandchildren also know him as Big Papa.

Couple use faith and fitness to transform the community

FLORENCE — Herbert and Nicole Goodman use their love for fitness and faith to not only help people achieve their body goals, but also to push …

LAKE CITY, S.C. -- Florence County School District 3 has designated Friday, Sept. 30, as an e-learning day for all students because of the potential for severe weather from Hurricane Ian.

FLORENCE, S.C. -- A Second Loop Road traffic stop Thursday ended with the arrest of a Florence man on drug charges.

FLORENCE – A sunny, fall day, Monday was a perfect backdrop for the dedication and ribbon cutting at the home of Bernice Douglas on Carolina D…

FLORENCE, S.C. — The last Florence After 5 of the 2022 season, originally scheduled for Friday, has been canceled because of forecast impacts from the remnants of Hurricane Ian.

JOHNSONVILLE, S.C. -- An early Wednesday morning drug raid on a residence at 419 Azalea Street ended with the seizure of a "large quantity of heroin, guns and drug distribution paraphernalia."

Gregg Robinson speaks on the economic growth of Florence County

Nigeria flooding: Highest waters in a decade kills over 300 people

Nigeria flooding: Highest waters in a decade kills over 300 people

Colombia repatriates 274 priceless artifacts from US

Colombia repatriates 274 priceless artifacts from US

Amber Sellers announces the Greater Florence Chamber of Commerce’s Business Person of the Year during the organization’s annual luncheon at the Florence Center.

The Greater Florence Chamber of Commerce 2022 Business Person of the Year iJames Marvin Owen was surprised with the honor on Wednesday at the chamber’s annual Membership Luncheon at the Florence Center.