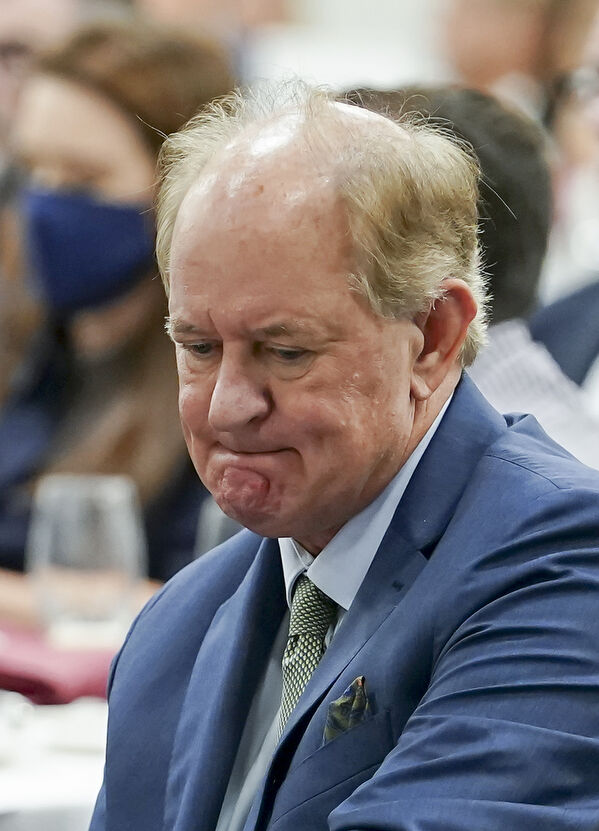 Jim Brown appears to get emotional Thursday after realizing he’s been named the Business Person of the Year at the Greater Florence Chamber of Commerce Membership Luncheon at the Florence Center. 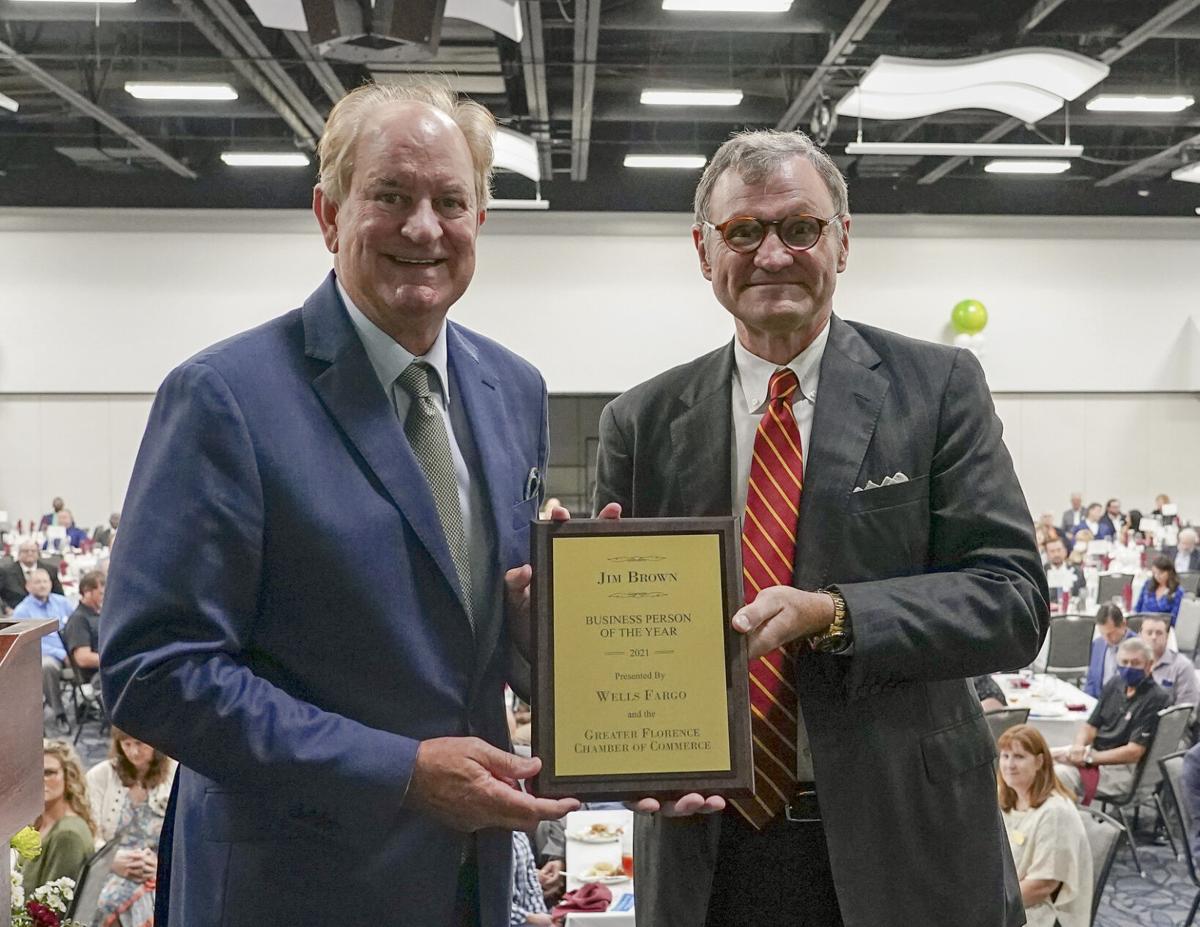 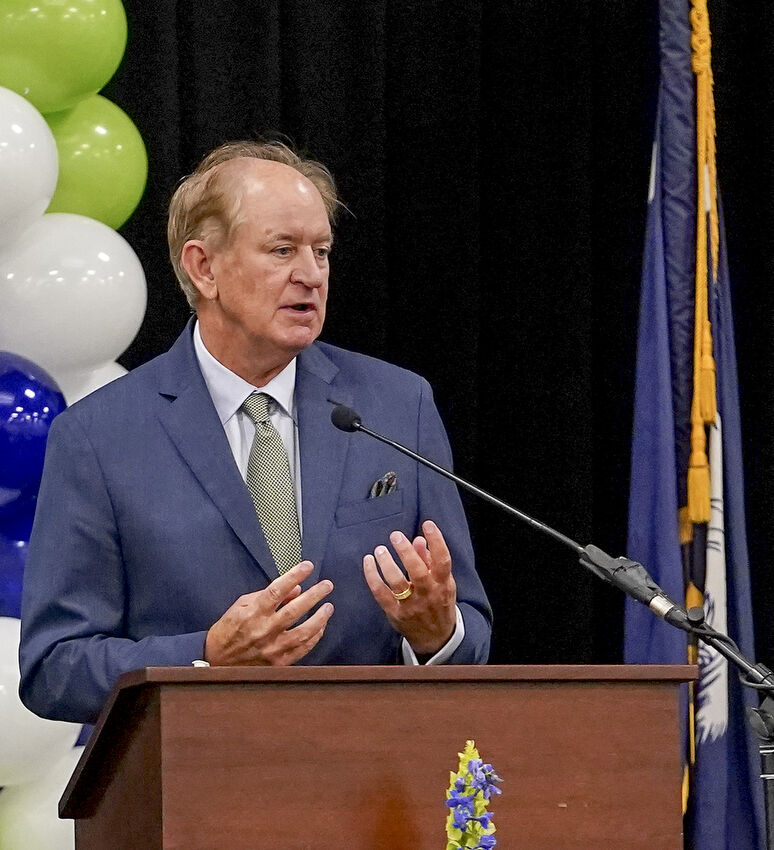 Jim Brown speaks Thursday after receiving the Business Person of the Year award at the Greater Florence Chamber of Commerce Membership Luncheon.

FLORENCE, S.C. – Jim Brown was named the Business Person of the Year on Thursday at the Greater Florence Chamber of Commerce Annual Membership Luncheon.

Brown is a founding partner of Synergi Partners Inc. and ERS, both in downtown Florence.

The award is sponsored by Wells Fargo, and making the presentation was John Bankson, senior vice president and national director of closely held asset management for Wells Fargo and a member of the Florence Chamber board.

“If you look at the list of previous year’s Business Person recipients, you will recognize their business acumen and lasting contributions that have been realized in our communities throughout the Pee Dee,” Bankson said. “They have all managed a successful business with a record of responsibility toward their employees, their customers and the members of our community. This year’s Business Person of the Year recipient clearly fits that definition.”

Bankson said that shortly after graduating from Francis Marion University in 1980, Brown became the executive vice president and partner of Shelly Management Services or SMS.

“About this time, he adopted an adage to live by: ‘Don’t ever let anything be ordinary.’ Ordinary is average, normal, usual and commonplace,” Bankson said. “Based on his success, he has lived an extraordinary life, one of leadership, vison and a strong work ethic.”

In 1993, Brown and other local investors started Home Health of SC Inc. Home Health of SC employed more than 200 health care workers with offices in Florence, West Columbia, Summerville and Rock Hill, Bankson said. He said Home Health of South Carolina grew to be “the largest privately owned home health care provider in the state.” In 2010, that business was purchased by National Healthcare Corporation.

Between 1994 and 2003, as CEO and partner in SMS Management Services, Brown helped create the largest tax-incentive company in the nation, Bankson said. At the time, SMS employed more than 250 Pee Dee-area residents. The client base grew to include companies such as United Parcel Service, Safe Way Food Stores, Food Lion, Fed-Ex, Wal-Mart, Denny’s, AutoZone, Walgreens and other companies.

In 2010, Brown and his partners started a company called EmployReward Solutions Inc., or ERS, where he served as CFO and partner. ERS serves Social Security Administration disability beneficiaries with services that assist in transitioning them back into the workforce.

“The company currently employs about 120 people and has grown to be the largest employment network in the nation,” Bankson said.

The company’s headquarters is in downtown Florence.

“In 2018, after having retired from ADP, the serial entrepreneur became one of the founding members and CEO of Synergi Partners Inc., which provides a range of tax-incentive services and employs more than 400 area individuals,” Bankson said. “They offer work opportunity tax credit processing; federal and state credit processing; and disaster relief tax-incentive services for businesses across the U.S. The company established an office in Puerto Rico to serve in their hurricane recovery efforts in late 2018. Just recently Synergi has expanded its services to include the new Employee Retention Tax Credit that support businesses that were disrupted by the COVID-19 pandemic. That expansion created unprecedented growth requiring more office space investment in downtown Florence.”

Brown also has partnerships in multiple hotel and real estate ventures—local and statewide.

“Through all his business development, downtown Florence has benefited from his ideas and investments,” Bankson said. “Currently the ERS and Synergi companies occupy more than 46,000 square feet of office space in downtown Florence including the entire Rainwater building and the majority of Kress corner.”

Bankson said, “If you were to ask his partners about Jim Brown, they would say Jim is a ‘serial entrepreneur’ and has built and grown several corporations which were sold to Fortune 500 companies. But let’s not forget the hundreds of local jobs his businesses have created and continue to produce.”

Business partner Tim Norwood said Brown is “innovative, creative, has a great work ethic, and is a motivator and a leader.”

The two men met in 1974 and were college roommates at FMU. They and have been business partners since 1995.

“He is a great leader,” Norwood said. “He is like a coach, always encouraging.”

Norwood said Brown has a lifetime of achievement. He said his partner is one of the most experienced businessmen in the area. But above all, Norwood said he is a great friend.

“He is loyal and supportive and has been since we met nearly 50 years ago,” Norwood said.

Business partner Frank Chisholm said no one has created more jobs in this area than Jim Brown. He said between their two companies in downtown Florence they have a total of 427 employees.

“That is a great boost for downtown revitalization,” Chisholm said.

“He is a very focused and driven person,” he said.

Chisholm said Brown is the right person for this award and has been.

“He is a great person and special to work with,” Chisholm said. “This is a great day for our companies, and Jimmy has led the way.”

Brown said he doesn’t seek the spotlight but he thanked the chamber and award sponsor Wells Fargo for the recognition. He also thanked his family for their support in what is often a 24/7 job.

“I am very lucky to have great partners,” Brown said. “Florence is a special place. It is a great place to raise a family and to start a business.”

Brown said he says to naysayers when trying to do something to better the community that “We are Florence. That is why we can do this.”

Brown is passionate about making Florence a better place to live and raise a family.

“It means a lot to be recognized and have the business recognized,” he said. “I don’t feel deserving.”

He said that the award is very humbling and that he feels as though he is taking credit for a lot of things other people have had a hand in accomplishing.

Brown said it means a lot to his family as they always try to help Florence grow and make it better.

Throughout his business endeavors, he has also been active in the community having served as vice president of National Employment Opportunity Network, board member of The Byrnes Schools and Trinity Byrnes, 20 years of service with Francis Marion University Board of Trustees and served on the BB&T Advisory Board.

Brown is also known as a huge Clemson fan—rarely missing a game, Bankson said, and he has attended all but two home games in the last 25 years and attends almost as many of the away games.

“Outside of his family and work, he is known to have three passions: Clemson football, Clemson basketball and anything else Clemson,” Bankson said. “His love of competitive sports is evident. He has recruited and encouraged many young diverse athletes to pursue enhanced education paths through The Byrnes Schools and Trinity Collegiate scholarships.”

Brown was born and raised in Marion. He is a 1977 graduate of Francis Marion University, where he served as vice president of Student Government Association, was a member of PI Kappa Alpha and lettered on the FMU soccer team.

Brown said he has lived in Florence for nearly 45 years.

He is married to Candace Phillips Brown, and he has five children and four grandchildren.

FLORENCE, S.C. – "The Lord has done it this very day, let us rejoice today and be glad."

Jim Brown appears to get emotional Thursday after realizing he’s been named the Business Person of the Year at the Greater Florence Chamber of Commerce Membership Luncheon at the Florence Center.

Jim Brown speaks Thursday after receiving the Business Person of the Year award at the Greater Florence Chamber of Commerce Membership Luncheon.