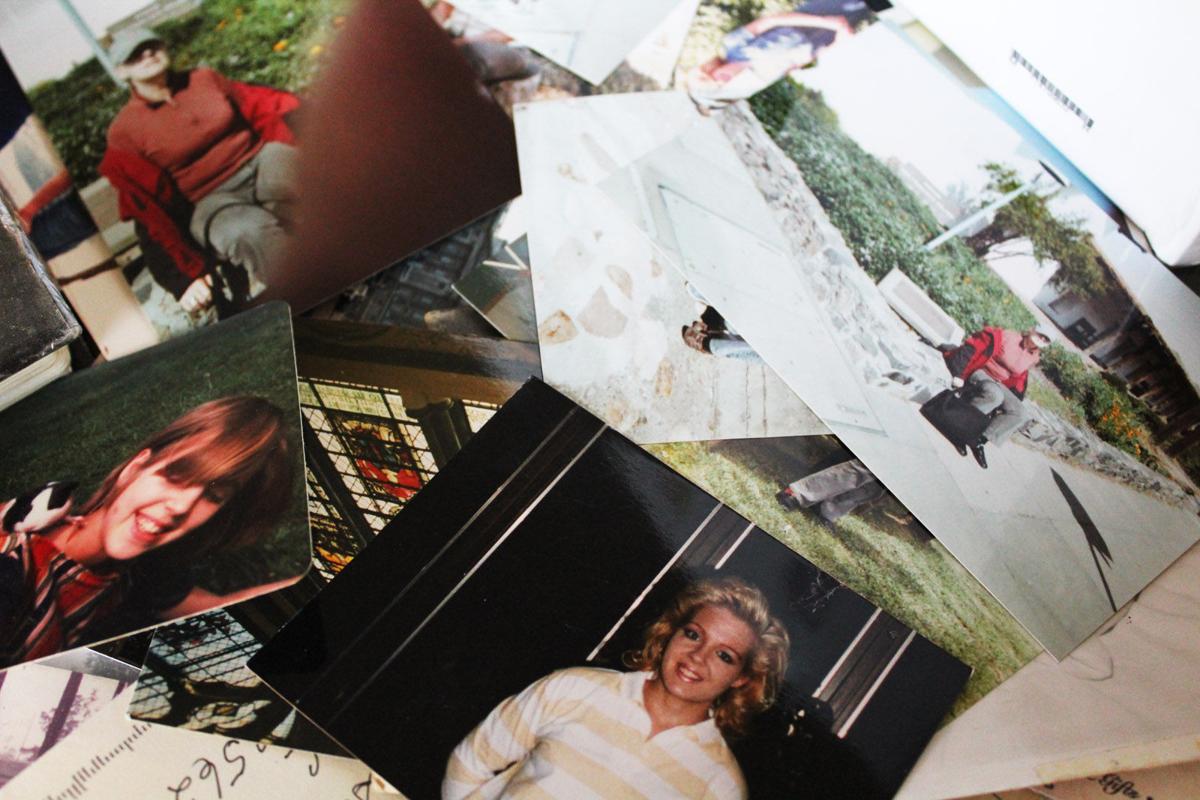 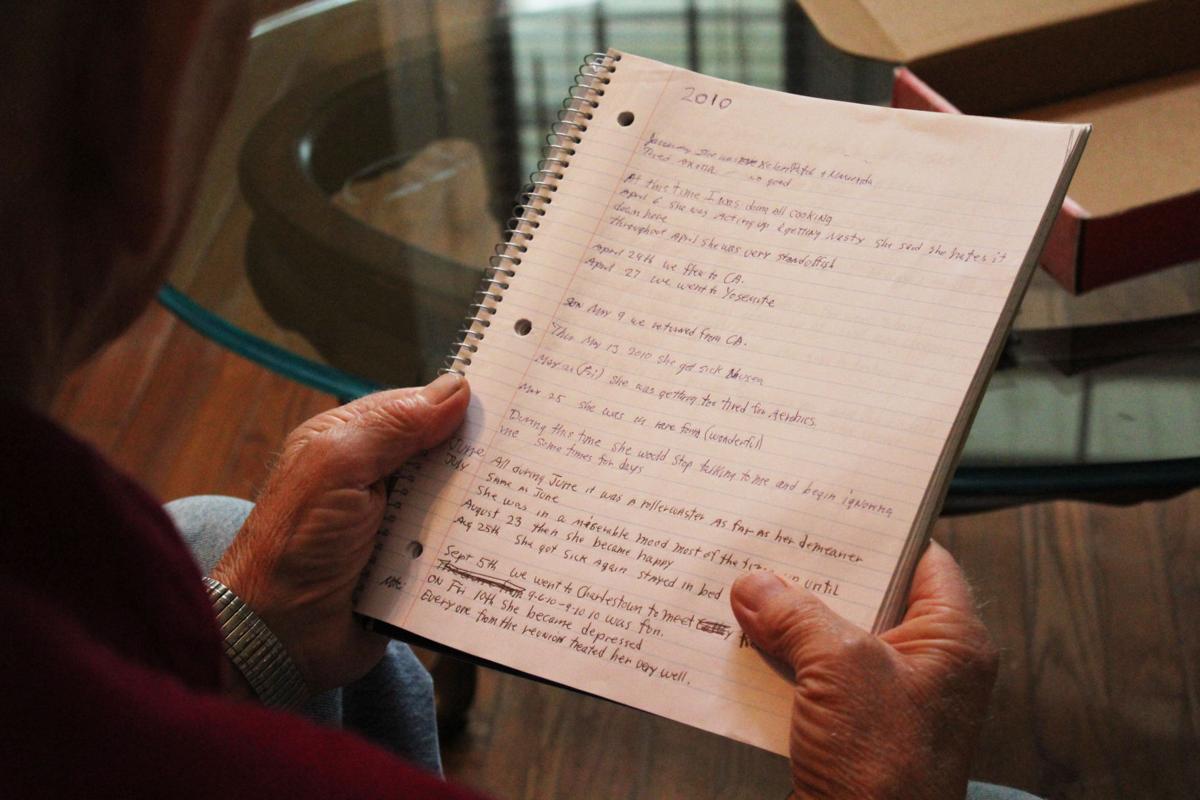 Balach kept a detailed account of his wife's disease.

“I was holding her, and I told her, ‘You’re not allowed to die on me yet. … You have to take care of me. Who’s going to look after me?’ Dave recalls. “And she just quit breathing.”

Mary Ann, 77, had Alzheimer’s disease, and for nearly a decade, Dave, 79, was her primary caregiver.

Theirs was a deep love.

After all, Dave said, that’s often what it takes to care for someone with Alzheimer’s.

“In retrospect, I can say we had the perfect marriage. We did. Because we were on a honeymoon for 50 years for sure,” he said. “And then Alzheimer’s took over, and it was a fight from then on.”

Though Mary Ann's disease was not diagnosed until 2008, Dave said, he began to notice signals as early as 2002.

His wife did all of the bookkeeping for Dave’s machinery business in Pennsylvania.

One day, she asked to take her work home and spread out on the floor to complete it. When Dave arrived back at the house after work, all of the books were still on the floor, and no work had been done.

“This is what I’m ashamed of. I accused her of wanting to stay home and watch television. I’m being truthful with you. And that’s what I said,” he said. “God, I could bite my tongue a thousand times.”

Another sign came later when Mary Ann drove miles on icy mountain roads during a dark, snowy night to see her husband while he recovered in rehabilitation post-surgery.

“She would never even think of driving like that on ice and snow before,” he said.

Taylor Wilson, director of communications and advocacy with the Alzheimer’s Association, said this is common in patients with Alzheimer’s.

“Those behavioral changes, we see that a lot,” she said.

Dave distinctly remembers the day his wife was diagnosed. It was less than a year after the couple moved south to Lake View, S.C.

He sat beside his wife in Dr. Ashley Kent’s office in Charleston as the doctor asked question after question.

Simple questions that most could answer with ease were tough for Mary Ann, and she looked to her husband for help.

“It breaks your heart because you can’t help them,” Dave said. “And after the whole interview, the doctor said, ‘Your wife has Alzheimer’s.’ He said, ‘I hate to tell you, but she does.’”

Kent prescribed an Exelon Patch and Namenda, both of which are given frequently to Alzheimer’s patients.

A day in the life

The amount of work required to care for Mary Ann grew as her disease progressed.

At her worst, caring for Mary Ann meant that Dave bathed his wife, fed her, changed her, administered medicine and continuously rolled her over in the bed to prevent bed sores.

It was a taxing process for Dave, but he did it willingly.

He would sometimes break down seeing the frustration in his wife’s eyes as she struggled to remember something.

“I was in business for 30 years before I came down here. I’ve been through everything already with people, handling all kinds of people, irate customers and everything, OK. Believe me, nothing could touch me. But Alzheimer’s made a cream puff out of me. That’s the best way I can say it,” Dave said.

In her less than lucid moments, Mary Ann would sometimes get angry with Dave, running down the road to a neighbor’s house or digging her nails into her husband’s hand.

And in these experiences, Dave learned that anger is never an option for a caretaker.

He also learned the art of patience.

“You have to learn how to handle each situation as it comes along, and you have to know how to handle the person,” Dave said. “You’ve got to have the love and the compassion for them and the patience. Those three things there will do it all. But boy, sometimes you dig down deep inside of you and try to find some of it.”

Dave suspects that his wife had a stroke toward the end of her life. She lost her ability to talk and communicate with Dave and Patricia, who was hired to help out in the later years.

But with time and daily commitment, Dave helped Mary Ann reach a point where she could again communicate – even if just responding to questions.

“There’s a theory about something called reserves. … While parts of the brain are dying off because of the amyloid plaques that are formed in the brain, there are other connections that the brain is trying to make to try and make up for that,” Wilson said.

This explains the circumstances when Alzheimer’s patients lose the ability to do something and then pick it back up a few months later or have a completely lucid weekend after six months of incoherence, she said.

By working with his wife daily, Dave helped to create reserves, Wilson said.

“All of that hard work, you were rebuilding her brain,” she told him.

Dave lost Mary Ann on March 23. He is now on a mission.

He hopes to work with the Alzheimer's Assocation to raise more money for biomedical research. This is something that Wilson advocates for on a regular basis.

In 2016, an estimated 5.4 million Americans have Alzheimer's disease. Before her death, Mary Ann was one of 84,000 people in South Carolina with the disease. It is the sixth-leading cause of death in the United States, and the fifth-leading cause for those 65 and older.

Dave also plans to use his knowledge and experience to help train others. He recently became an instructor for other caregivers.

In South Carolina alone, approximately 300,000 people provided 341 million hours of unpaid care in 2015 to those with Alzheimer’s and other dementias, according to recently released data from the Alzheimer’s Association. That care has an estimated economic value of more than $4 billion.

“I want to share that (what I’ve learned as a caregiver) with other people because otherwise I think it’s all lost,” he said. “The education I got is going to be lost.”

'Concerning' asteroid will break into Earth's orbit in a week: NASA

'Concerning' asteroid will break into Earth's orbit in a week: NASA

FLORENCE, S.C. – The leader of the Salvation Army in Florence said that recent reports of two of its guides on racism took the guides out of context.

TIMMONSVILLE, S.C. -- One person died Saturday night in a single-vehicle crash in the Timmonsville community of Darlington County.

FLORENCE, S.C. -- Florence Police are looking for a suspect with outstanding arrest warrants connected to three "collision scam" incidents that took place Nov. 9 and then another on Nov. 29.

FLORENCE, S.C. -- An unattended candle early Tuesday morning started a fire and left a family homeless heading into the holidays.

FLORENCE, S.C. -- The Second Annual 2021 Gift Market at the Florence City Center Farmers Market was a success, at least if you measure it by marshmallow consumption and wreath sales.

FLORENCE, S.C. -- More than 180 runners competed Thursday in the Florence Turkey Trot 5K -- one of the fastest races run this year.

Balach kept a detailed account of his wife's disease.