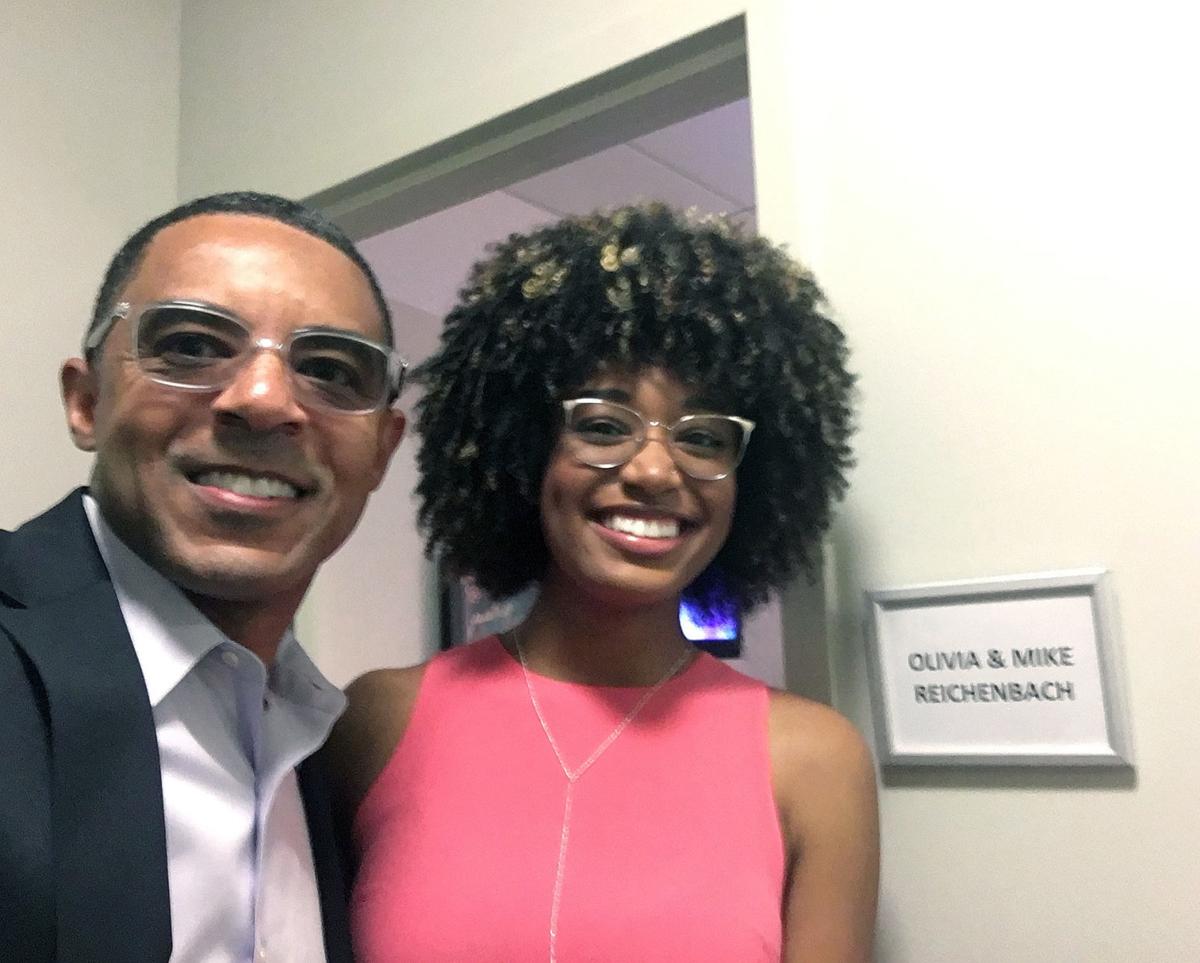 Mike Reichenbach and his daughter, Olivia, will appear on the Monday, Dec. 9, episode of The Kelly Clarkson Show. They taped the episode in August. Here they are outside  their dressing room.

The Kelly Clarkson Show Studio is part of Universal Studios in Hollywood.

FLORENCE, S.C. — It is not every day that folks from the Pee Dee get to rub elbows with Hollywood stars but it’s happened for Mike Reichenbach and his daughter, Olivia. They will appear as guests on “The Kelly Clarkson Show.” The show episode will air at 3 p.m. Monday on WPDE.

Mike Reichenbach said the show was taped in August on his daughter’s 18th birthday.

“Being on the show was incredible,” Reichenbach said. “They flew us to Los Angeles and had a car waiting to drive us to our Hollywood Hotel. The next morning, they picked us up and took us to the Universal City to ‘The Kelly Clarkson Show’ Studios. We were so excited to be shown to our own dressing room with our name on the door.”

For the past several years, Reichenbach said, said his daughter has taken short videos with her phone of the family’s everyday life.

“She has done it for so many years, we don’t even realize she’s recording us anymore,” he said. “Many of the videos include me singing and dancing, which I do often around the house and especially with my family.”

He said one day this past summer he was trying to sing the lyrics of a song to his wife, Charisse, and Olivia happened to be on the couch.

“While I certainly mangled the lyrics, I incorporated Charisse in such a way that Olivia thought was hilarious,’ he said. “Olivia posted the clip to her Twitter account, and 3.7 million views later it went viral.”

Charisse said his singing is definitely better than his dancing.

“He may not sing in tune, but he sure acts like he does,” she said. “He lights up when he sings, and it is with such joy intermixed with playfulness. It’s fun watching him, and he makes me want to join in too. Don’t get me wrong, he’s a wonderful dancer. In fact, when he was the first winner of Florence’s Dancing with the Stars 10 years ago, I was actually not surprised. What can I say … I married a man with many talents who just happens to also be an amazing husband and father.”

Reichenbach said Charisse is “the love of my life.” They have been married for 23 years.

“I remember saying to myself after our first date, ‘I don’t know what I’m saying, but I can’t imagine my life without this woman.’”

Charisse is from Michigan and Mike is from Ohio, but he said they are true Florentines now, having been here since 2008.

Mike said people started requesting other videos of him singing and dancing.

“In one of those other videos, I’m in our kitchen making coffee while singing along to the song, ‘Bang, Bang,’ by Ariana Grande, Jessie J and Nicki Minaj,”he said. “That’s a song that really makes me show off my ‘Dad Moves’ so I guess I got into it. Olivia posted that video which gained hundreds of thousands of views.

“Unbeknownst to us, around the same time, Kelly Clarkson was preparing to debut her new daytime talk show. Kelly wanted to start each show by doing the cover of a popular song, and she chose ‘Bang, Bang’ as one of the songs to cover.”

Reichenbach said Clarkson’s production team was given the task of finding a fun way for her to introduce the song after she sang it.

“Through the amazing reach of social media, Kelly’s team found the clip of me singing the song, and they thought it was fun,” he said. “Then, after seeing all of the many other videos Olivia has taken over the years, Kelly and her team decided to expand the story by highlighting the strong bond between Olivia and me, and fathers with their daughters.”

He said, “Next thing you know, Olivia is receiving contact requests from one of her (Clarkson’s) producers, and the rest is history.”

Reichenbach said when his daughter first told him that someone had contacted her from ‘The Kelly Clarkson Show’ and said he was a producer he dismissed it as a spoof or scam. After a few more attempts to make contact, they decided to call the producer.

“After three Facetime photo conversations with producers and researchers from the show, they decided they wanted us actually on the show,” Reichenbach said.

He said they wanted to focus on the relationship between father and daughter so just he and Olivia went to Hollywood.

“We are big fans of his,” he said. “Being able to see him and say hello in the hallway was an absolute treat.”

He said a producer met with them and explained how the show would go and what to expect.

“The entire atmosphere was electric with excitement and activity,” he said “Olivia and I just kept looking at each other and saying, ‘I can’t believe this is happening.’”

He said taping the show on Olivia’s birthday made it even more special.

When the producer walked them from their dressing room to their seats in front of the entire audience, he said, they felt like stars. He said people kept asking them who they were, as if they were “Hollywood types.”

“I didn’t think I could get away with passing for The Rock, so we told them that we were there as part of the show,” Reichenbach said.

“When Kelly came out, she sang ‘Bang, Bang,’ (which was an amazing cover),” Reichenbach said. “Then, we were given a microphone and Kelly, Olivia and I did our part of the show. Olivia and I were very nervous because even though we’ve done television commercials for many years, this was an entirely different environment. The audience, the lights, the cameras, the workers running around made it feel unreal … oh, let’s not forget the fact we’d be talking with Kelly Clarkson on national TV.”

He said Clarkson was amazing.

“Her voice is obviously incredible, but her presence is awe-inspiring,” he said. “She was really easy to talk with and seemed authentic, despite her ‘star status.’”

He said they also got to spend time with the guest star of their episode, Jane Lynch from “Glee” and “Hollywood Game Night” fame.

“She came over and sat beside Olivia and had a ‘real’ conversation, gave her birthday wishes, talked about both being tall,” he said. “It was surreal watching my 18-year-old daughter have a normal conversation with a Hollywood star, while we just finished talking with Kelly Clarkson on her own talk show: ‘Twilight Zone’ if ever there was one for me.”

“All in all, it was one of the most unexpectedly unique and enjoyable experiences I could ever imagine sharing with my daughter on her 18th birthday, and we appreciate Kelly Clarkson and her team making it happen,” he said. “I never dreamed that being a goofy dad with significantly challenged singing abilities and having a creative daughter with a talent for always having her phone with her could bring us this much fun. My family means the world to me, and having an experience like this with Olivia before she went off to college that week was incredible. I love and miss Olivia so much while she’s at school, but we’ll always have our Hollywood experience along with so many others.”

He said Olivia thinks the fame is fabulous because it exposed them to so many unexpected surprises such as a trip to Hollywood, private dressing room, speaking to Steve Carell, Kelly Clarkson, and Jane Lynch on a national TV show.

His son, Isaiah, 16, was more in shock because “I’ve mangled song lyrics while dancing like a goof for so many years, how is it possible millions of people have viewed and retweeted it?”

Reichenbach said it was difficult not knowing when the episode was going to air even though it was shot the first week of production.

FLORENCE, S.C. — A group of Florence residents held a parade to mark the homecoming of Amir Cooper Saturday morning. Cooper had an eye and a small portion of his face removed after doctors found mold and fungus were growing behind his eye. Cooper spent seven weeks in the hospital in Charleston and another two weeks at McLeod Regional Medical Center. The parade ran from 1007 Kershaw St. down Ballard Street to East Pine Street and along East Pine to an empty lot near its intersection with Charlotte Street.

FLORENCE, S.C. -- Investigators are asking for the public's assistance to locate a missing Florence man.

TIMMONSVILLE, S.C. — Timmonsville Mayor Darrick Jackson says he is concerned about the potential closure of schools in the district that serve…

FLORENCE, S.C. — Florence City Councilwoman Pat Gibson-Hye Moore has has had enough of the city's slumlords. Gibson-Hye Moore spoke about her efforts to contact landlords at a special-called city council meeting held to discuss a proposed rental registry for the city.

FLORENCE, S.C. — The Palms Course at Lake Oakdale has been sold. Florence County property tax records indicate the property upon which the golf course sat was sold to Claussen Developers LLC for $1.44 million on Sept. 10.

FLORENCE, S.C. — Either Republican T.J. Joye or Democrat Darrin Yarborough the next sheriff of Florence County. The winner of the election will replace Sheriff William C. "Billy" Barnes who took over the office in 2019.

Sunny days ahead: Timmonsville to be site of $20 million solar power facility

Mike Reichenbach and his daughter, Olivia, will appear on the Monday, Dec. 9, episode of The Kelly Clarkson Show. They taped the episode in August. Here they are outside  their dressing room.

The Kelly Clarkson Show Studio is part of Universal Studios in Hollywood.