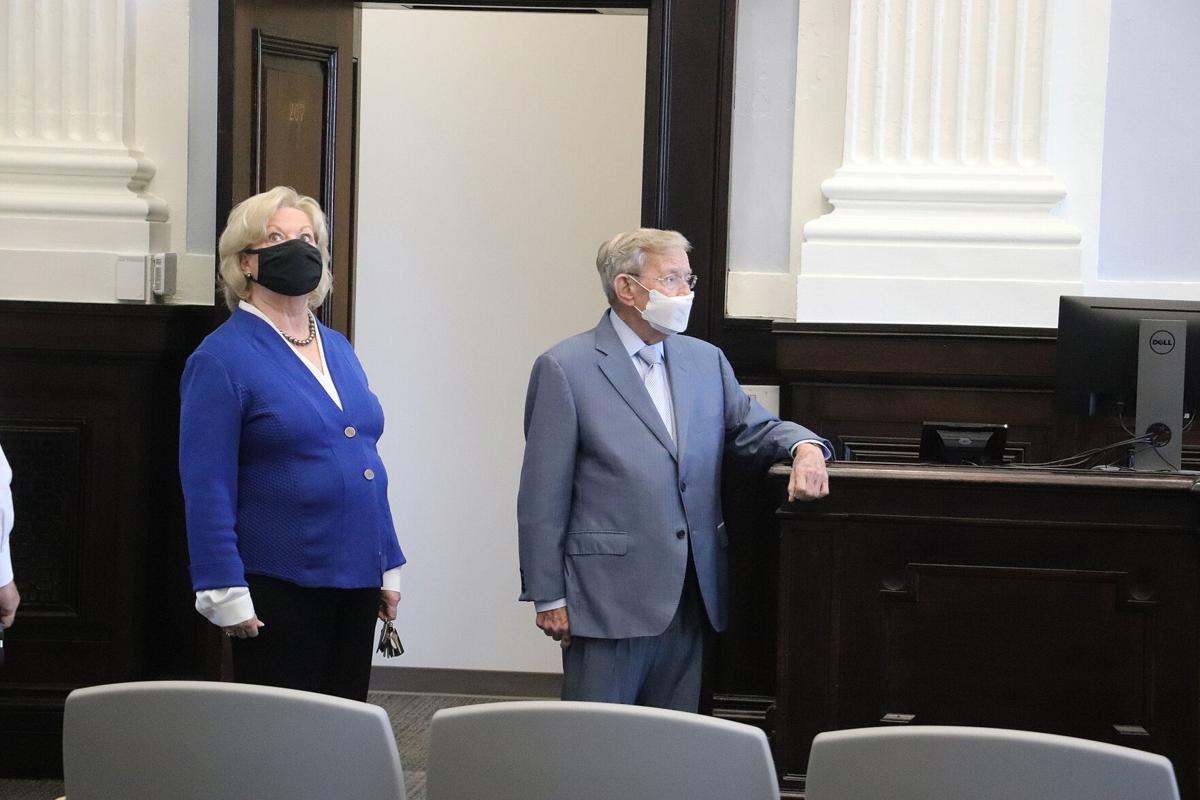 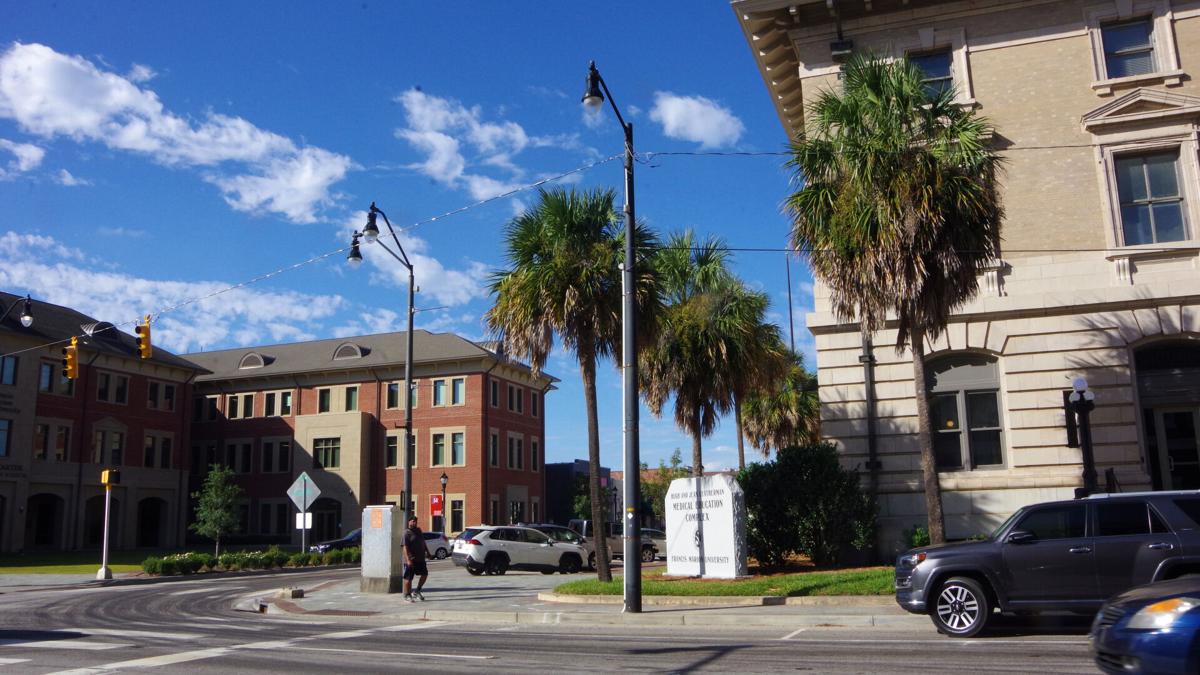 The old Florence federal courthouse (right) will be the Hugh and Jean Leatherman Medical Education Complex for Francis Marion University.

FLORENCE — "Oh wow," said Florence Realtor Jean Leatherman as she, her husband, Hugh, and FMU President Fred Carter walked into the courtroom in the old Florence federal building. The building is now part of the Hugh and Jean Leatherman Medical Education Complex for Francis Marion University.

Built in 1906 and added onto in 1938, the courthouse was there for the rise, fall and consolidation of the railroads that summoned Florence into existence. It has been there for all but three years of the age of flight. Two World Wars, the beginning and end of the Cold War and a litany of other conflicts.

In 1975, it saw the construction of the J.L. McMillan Federal Building and U.S. Courthouse, and its fortunes then went into a decline.

The building, constructed with sandstone and brick with hipped roof, is done in the Second Renaissance Revival Style. It housed individual offices for a while.

Things are looking up for the eye-catching building.

The old courtroom, one of the centerpieces of the old federal building, features floor-to-ceiling arched windows that all but cover one wall of the courtroom. The vintage judge's bench remains along with the Great Seal of the United States where it was hand painted during the Great Depression.

Where once the windows overlooked a roof, they now open onto a roof-top event venue.

Long gone are the benches and tables of the courtroom, replaced with chairs that have fold-up desks on them where future health care providers will sit for lectures.

"You'll notice they preserved all the masonry, all the wood, the cornices. They actually restored all the original walls," Carter said of the courtroom, bathed in midday light on the day of the tour. "This was in pretty bad shape when we came in. This room had been neglected."

The building as a whole was heading in a direction that nobody wanted to see — but no more.

FMU got the building and did a top-to-bottom renovation and rebuild on it with the assistance of architects Scott Collins and Sanders Tate.

"All that back there was sealed off, because it was judge's quarters," Carter said of offices and classrooms located behind the bench in the old courtroom.

Offices at the other end of the courtroom met the same fate — replaced for faculty offices and classrooms.

And bathrooms that meet ADA standards.

Gone too are the old stairs that would have been used to move between the original building and its 1938 addition.

"A lot of what we've done is conform the original building to current building codes," Carter said of the hallway that leads to a new elevator on the back of the building. "This used to be a series of steps here, but we had to make it ADA compliant."

They were able to preserve all of the brick and restore some of it.

Each slate tile on the roof received individual attention — though a few had to be replaced.

Still there are the original elevator — no longer used because it is too small to bring up to modern standards — and the old marble staircase.

The area behind the windows that had been a postal work area is now an occupational therapy room. Offices and classrooms are also scattered around the first floor.

The basement received a complete makeover.

Gone are the storage and boiler rooms, replaced with clinical areas for the university's therapy programs.

"They don't have natural light, so they made up for it with color. Very clever," Jean Leatherman said.

Around the waiting room are therapy rooms, all arranged so that the sessions can be monitored by professionals.

One thing you won't find in the building is vending machines or food vendors, Carter said.

Much like the university's other downtown buildings, the decision to omit such things was deliberate. Carter said he wants students to frequent downtown businesses for their snack and drink needs.

The plan is to move into the building over the Thanksgiving break, Carter said.

Inside, look for our 2020 Progress edition. The coronavirus pandemic has made it hard to put a positive spin on a negative year, but there are visual ways to tell a good story. Usually our annual special section is filled with thousands of words, but because they say a picture is worth a thousand words, the section this year is filled with photos.

FLORENCE, S.C. -- Some old paper boxes that had just been collecting rust in a back parking lot will get a second life and a chance to make a difference for some people in need.

Turkey escapes before getting pardoned

TIMMONSVILLE, S.C. -- One person died and a second was injured in a central Florence County crash Tuesday night.

FLORENCE, S.C. -- The oldest American Legion post in the state is looking for more than a few good, young members as it looks to reinvigorate itself moving forward. 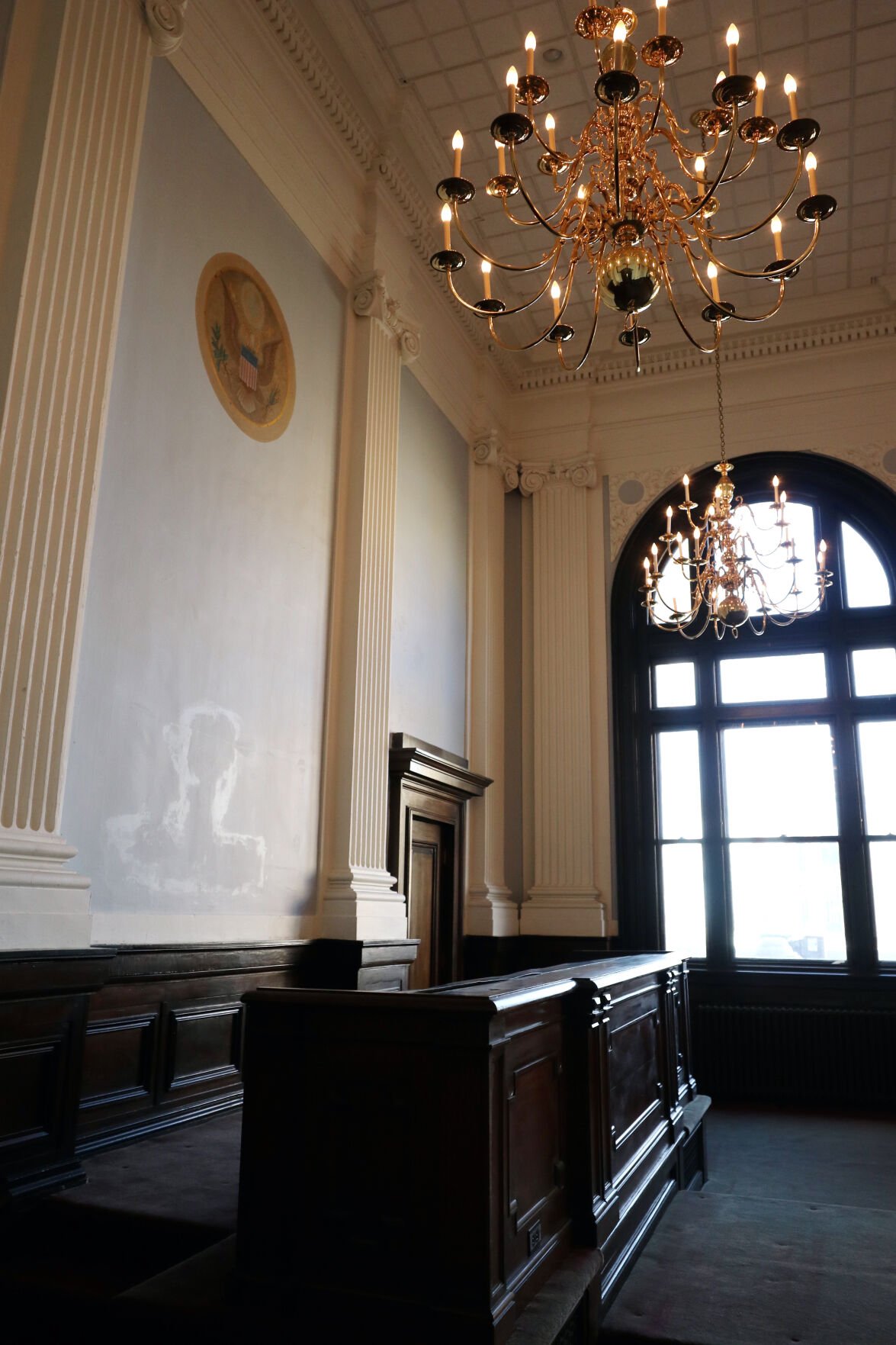 The old Florence federal courthouse courtroom and judge's bench, as seen before renovations.

The old Florence federal courthouse (right) will be the Hugh and Jean Leatherman Medical Education Complex for Francis Marion University. 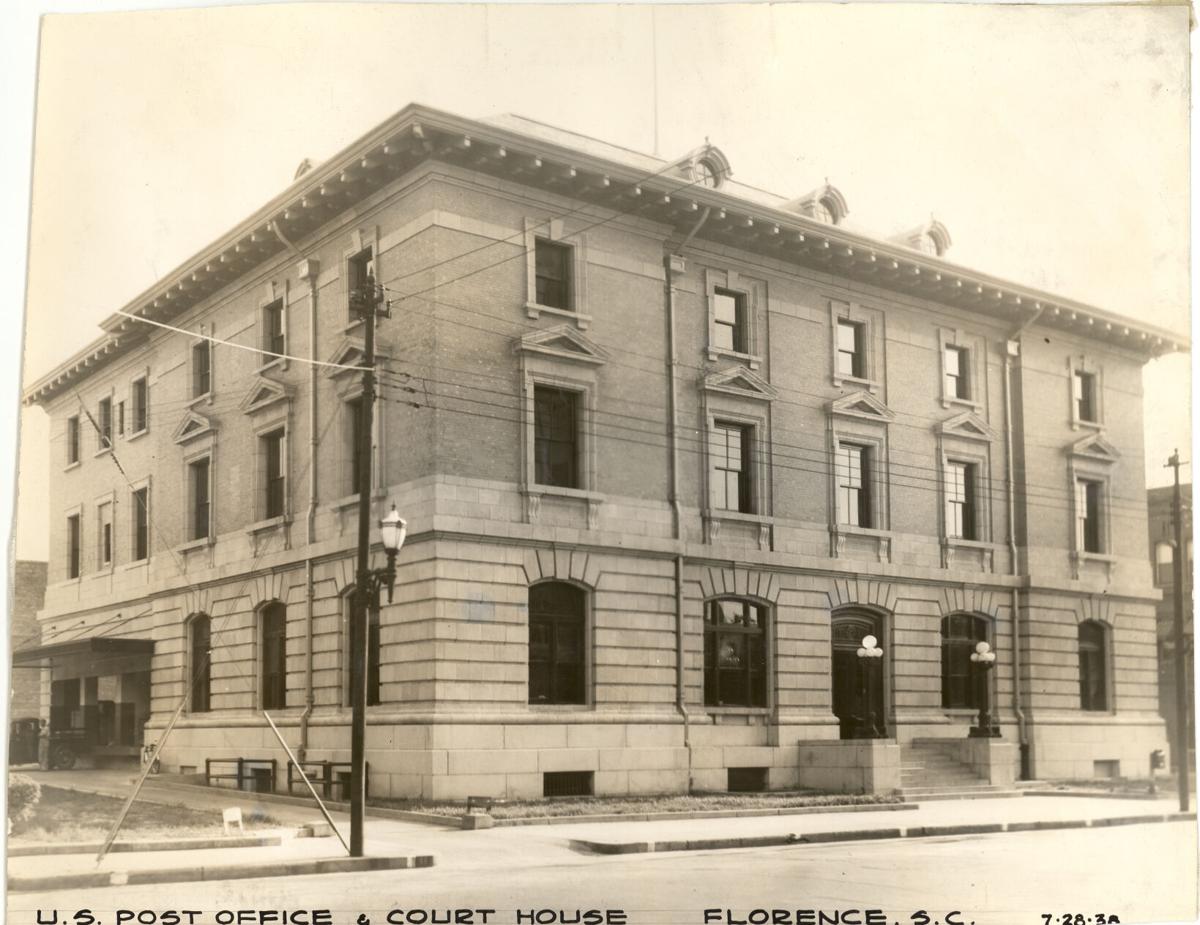 The Florence federal courthouse looked like this in 1938 after completion of the addition to the building. 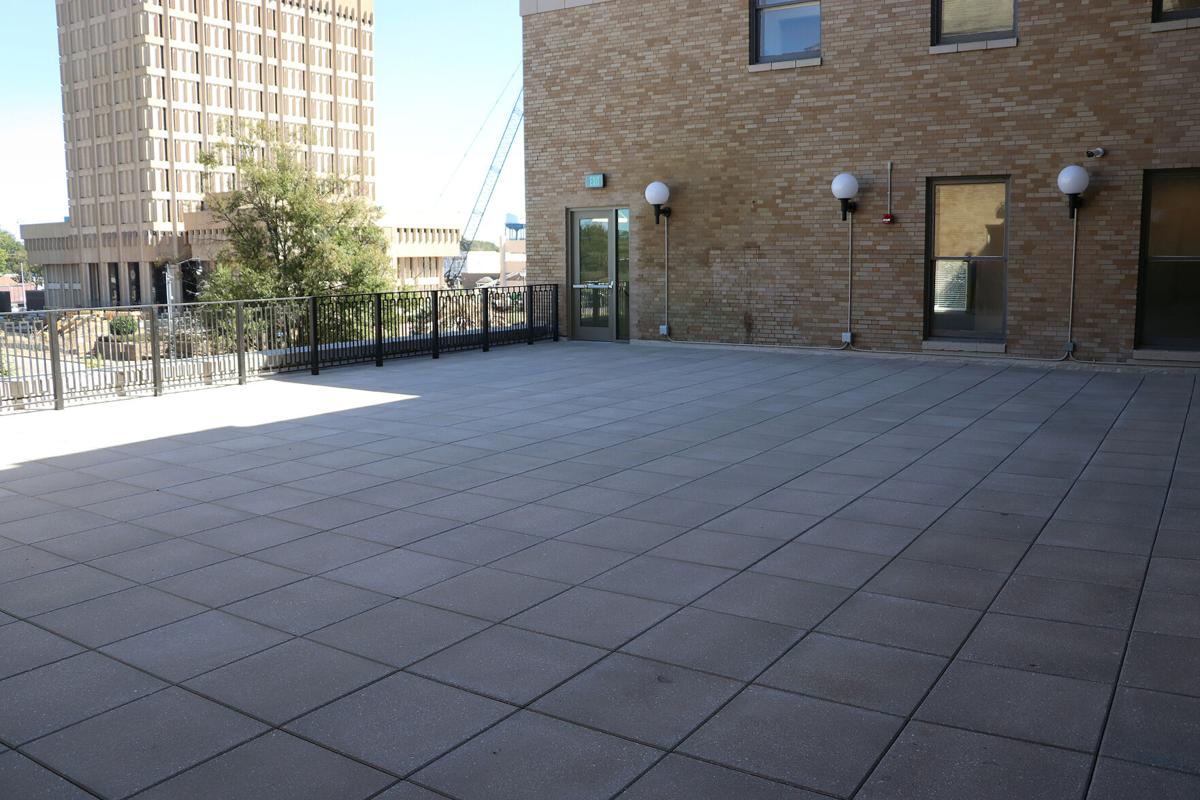 What had been a roof covered in rusting HVAC units is now an event space at the old Florence federal courthouse. 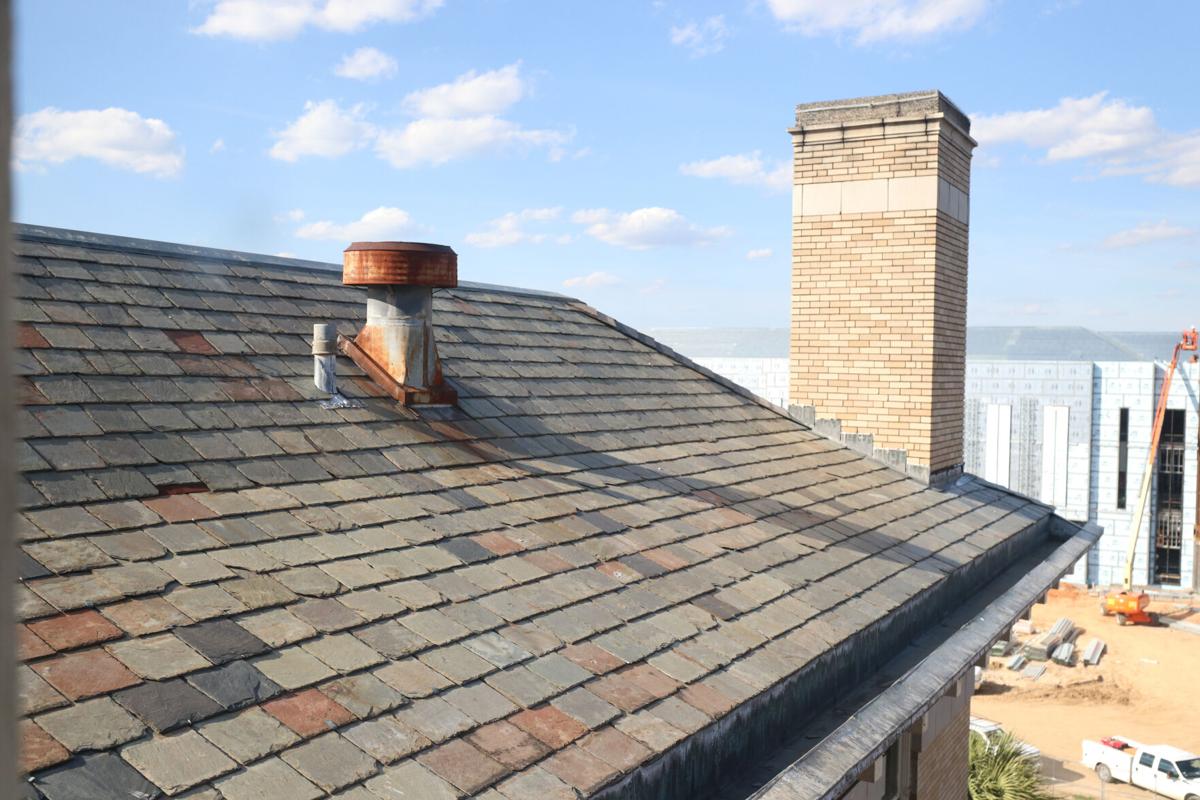 Each slate tile from the old Florence federal courthouse's roof was individually restored, though some had to be thrown away because of damage. 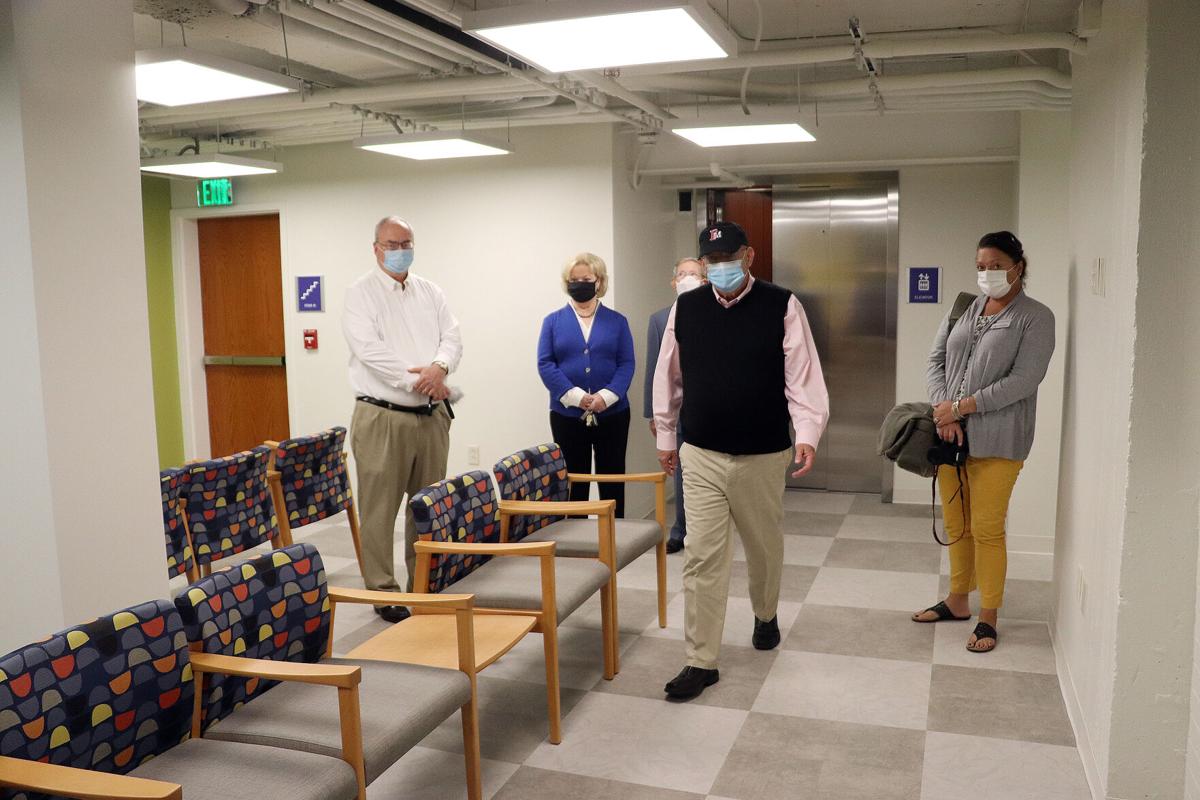 This is the clinical waiting room in the basement of the newly renovated old Florence federal courthouse. 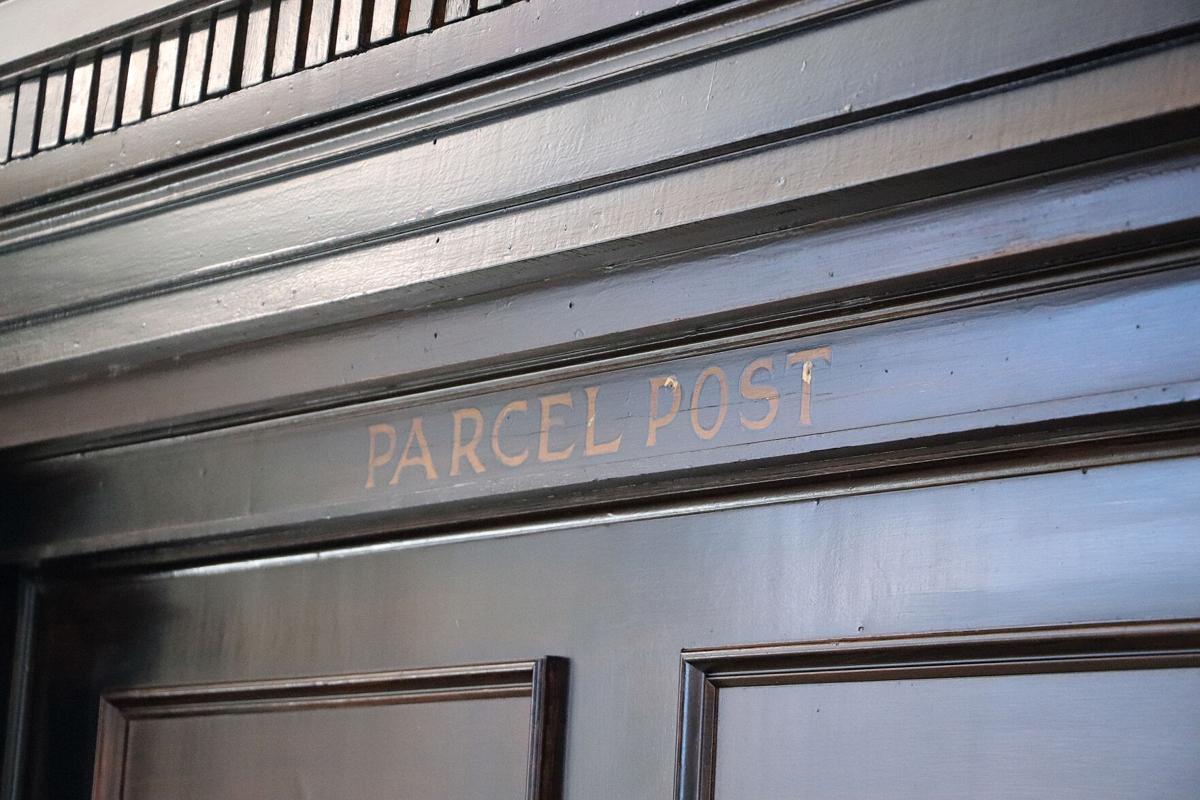 The parcel post window in the old post office is still there in the former Florence federal courthouse. 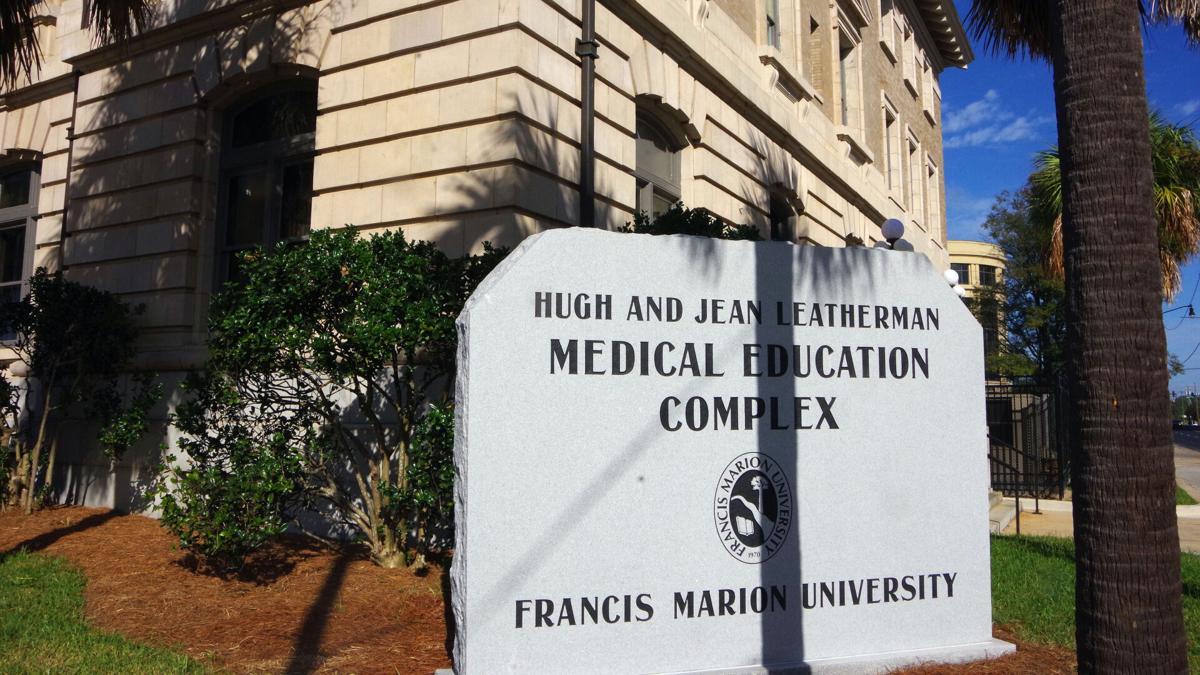 The old Florence federal courthouse will be the Hugh and Jean Leatherman Medical Education Complex for Francis Marion University.