NEW ORLEANS (AP) — A Louisiana man who is the oldest living World War II veteran in the United States has marked his 112th birthday.

Lawrence Brooks celebrated Sunday with a drive-by party at his New Orleans home hosted by the National World War II Museum, The Times-Picayune/The New Orleans Advocate reported. He also received greetings from Louisiana Gov. John Bel Edwards, who tweeted, "Mr. Brooks, the entire state of Louisiana thanks you for your service and we all wish you a joyous birthday."

The museum has previously hosted parties for Brooks although the coronavirus pandemic has caused those events to shift to drive-by celebrations for the past two years.

This year's festivities included a Jeep parade, a live performance from the museum vocal trio and entertainment from New Orleans musicians. The city also recognized Brooks' birthday with an official proclamation.

Born in Norwood, Louisiana, in 1909, Brooks has lived in New Orleans since 1929. Drafted in 1940, he was a private in the Army's mostly Black 91st Engineer Battalion, a unit that was stationed in New Guinea and the Philippines and built infrastructure such as bridges, roads and airstrips.

In an oral history about his service posted on YouTube, Brooks also described how he was delivering a load of barbed wire to the front when one of the engines of the C-47 he was traveling in went out.

After they dumped the barbed wire to conserve weight, he made his way to the cockpit. He told the pilot and co-pilot that since they were the only two with parachutes, if they had to jump for it, he was going to grab on to one of them.

"We made it though," he said laughing. "We had a big laugh about that."

1. Many photos were taken, but then lost.

War photographer Robert Capa, who said, “If your pictures aren’t good enough, you aren’t close enough,” landed at Omaha Beach on D-Day. He took more than 100 pictures, but when the film was sent to London, a darkroom technician dried it too quickly and melted the emulsion, leaving fewer than a dozen pictures usable. Even so, those shaky and chaotic photos tell the story of Omaha Beach.

2. Crossword puzzles were a concern.

In the weeks before D-Day, British intelligence was concerned about crossword puzzles. The London Daily Telegraph’s recent puzzle answers had included Overlord and Neptune (the code names for the overall operation and the landing operation) and Utah and Omaha (the two American invasion beaches).

Agents interrogated the puzzle-maker, Leonard Dawe. Turned out, it was just a coincidence.

3. The people who planned D-Day were bigots.

That was the code word — bigot — for anyone who knew the time and place of the invasion. It was a reversal of a designation — “to Gib” — that was used on the papers of those traveling to Gibraltar for the invasion of North Africa in 1942.

Among those who landed at Normandy on D-Day were J.D. Salinger (who went on to write “Catcher in the Rye”), Theodore Roosevelt Jr. (the president’s son, who died of a heart attack a month later) and Elliot Richardson (attorney general under President Richard Nixon).

The Allied effort to hoodwink Adolf Hitler about the invasion was code-named Fortitude, and it was nearly as elaborate and detailed as the invasion itself. The Allies went so far as to parachute dummies — outfitted with firecrackers that exploded on impact — behind enemy lines as a diversion.

A package from Supreme Headquarters in London arrived at a Chicago mail-sorting office a few months before D-Day and was accidentally opened. Its contents may have been seen by more than a dozen unauthorized people. The FBI found that a U.S. general’s aide of German descent had sent the package to “The Ordnance Division, G-4” but had added the address of his sister in Chicago. The FBI concluded that the aide was overtired and had been thinking about his sister, who was ill.

7. Not an 'invasion of Norway'

Woe be unto a politician who commits a gaffe during a D-Day remembrance. In 2004, Canadian Prime Minister Paul Martin referred to the “invasion of Norway” when he meant Normandy. Years later, at an event with President Barack Obama, British Prime Minister Gordon Brown cited “Obama Beach” when he meant “Omaha Beach.”

In a 1964 interview, Dwight Eisenhower said a single person “won the war for us.” He was referring to Andrew Higgins, who designed and built the amphibious assault crafts that allowed the Allies to storm the beaches of Normandy. The eccentric boat builder foresaw not only the Navy’s acute need for small military crafts early on, but also the shortage of steel, so he gambled and bought the entire 1939 crop of mahogany from the Philippines. His New Orleans company produced thousands of boats for the war effort.

While U.S. forces were conducting a training exercise off the southwestern English coast to prepare for the landing on Utah Beach, German torpedo boats ambushed them. More than 700 Americans were killed — a toll far worse than when U.S. forces actually took Utah Beach a few months later.

On June 4, 1944, U.S. forces were able to capture a German submarine off the African coast because they had broken the Enigma code and learned a sub was in the vicinity. On the eve of D-Day, the U.S. couldn’t risk that the Germans would realize the code was cracked. So they hid away the sub and its captured crew until the end of the war, and the Germans assumed the vessel was lost at sea.

A closer look at the attack

June 5, 1944: On the morning of June 5, amid bad weather fears, U.S. Gen. Dwight D. Eisenhower, the supreme commander of Allied forces in Europe, gave the approval for Operation Overlord. About 6,000 landing craft, ships and other vessels carrying more than 150,000 troops left England for France.

That night, about 1,000 aircraft filled with more than 15,000 paratroopers landed in drop zones in Normandy to begin missions behind enemy lines. About 12,000 aircraft were mobilized to provide air cover and support for the invasion.

June 6, 1944: Early in the morning, Allied bombers took off to attack targets around the beachhead. The amphibious landings, called Operation Neptune, also were preceded by extensive naval bombardment.

The seaborne units began to land about 6:30 a.m. France time. Many Americans were packed into flat-bottomed Higgins boats launched from troop transports.

At 3 a.m. ET on June 6, President Franklin Roosevelt received the call that the invasion had commenced. He later notified the nation by radio, saying that “at this poignant hour, I ask you to join with me in a prayer.”

On the coast of Normandy, the British and Canadians landing on Gold, Juno and Sword beaches overcame light opposition. The Americans at Utah did as well.

The U.S. 1st Division at Omaha Beach, however, confronted the best of the German coast divisions, the 352nd, and was torn up by machine gunners as the troops waded ashore.

Eventually the Allied troops fought their way inland, at a heavy cost of life. More than 4,000 died that day. By the end of D-Day, more than 150,000 troops had landed in Normandy. They pushed their way inland, allowing more troops to land over the next several days.

Watch Now: Biden wants to raise taxes on the wealthy

Watch Now: Biden wants to raise taxes on the wealthy

Watch Now: How much will space travel cost?

Watch Now: How much will space travel cost?

Body found in Wyoming believed to be Gabby Petito

Authorities say a body discovered Sunday in Wyoming is believed to be Gabrielle "Gabby" Petito.

The FBI says a county coroner has confirmed that human remains found along the border of Grand Teton National Park are those of 22-year-old Gabby Petito.

Police on Monday swarmed the Florida home of a young man wanted for questioning in the disappearance of his girlfriend, Gabby Petito. Get the latest.

Police bore down in large numbers on the Capitol over concerns a rally in support of jailed rioters from the Jan. 6 insurrection would turn violent. It didn't.

Her fiance, Austin Eskew, said in an interview with NBC News the couple was unvaccinated due to infertility fears she had with the shot.

A shooting at a Tennessee grocery store left one person dead and 12 others injured Thursday afternoon, and the shooter was subsequently found dead.

In a series of videos on TikTok, one woman said she and her boyfriend gave Laundrie a ride on Aug. 29 in Wyoming.

The U.S. moved a step closer Wednesday to offering booster doses of Pfizer's COVID-19 vaccine to senior citizens and others at high risk from the virus as the FDA signed off on the targeted use of the extra shots.

Tyler Christman, a freshman at Carthage High School in northern New York, was injured during a junior varsity game on Saturday. He died Tuesday.

Pfizer said Monday its COVID-19 vaccine works for children ages 5 to 11 and that it will seek U.S. authorization for this age group soon. Get the latest. 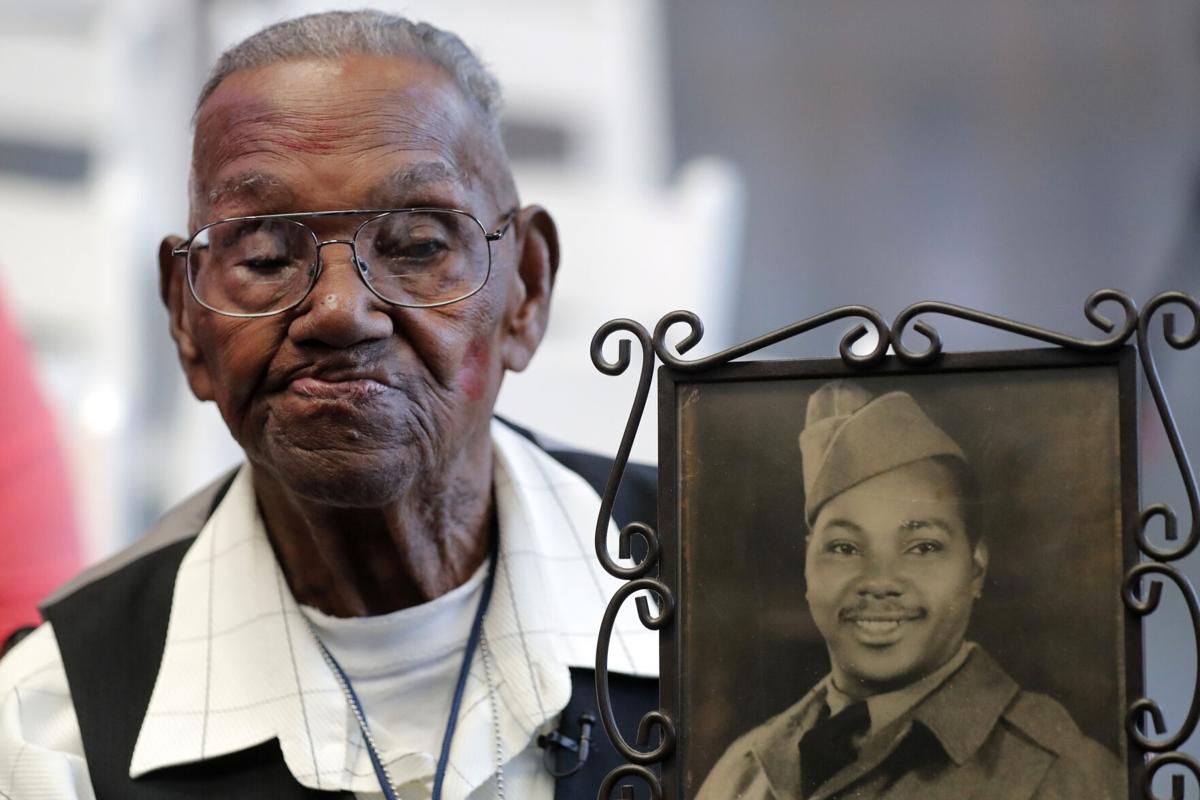 In this Sept. 12, 2019, file photo, World War II veteran Lawrence Brooks holds a photo of him taken in 1943 as he celebrates his 110th birthday at the National World War II Museum in New Orleans. Brooks celebrated his 112th birthday on Sunday with a drive-by party at his New Orleans home. 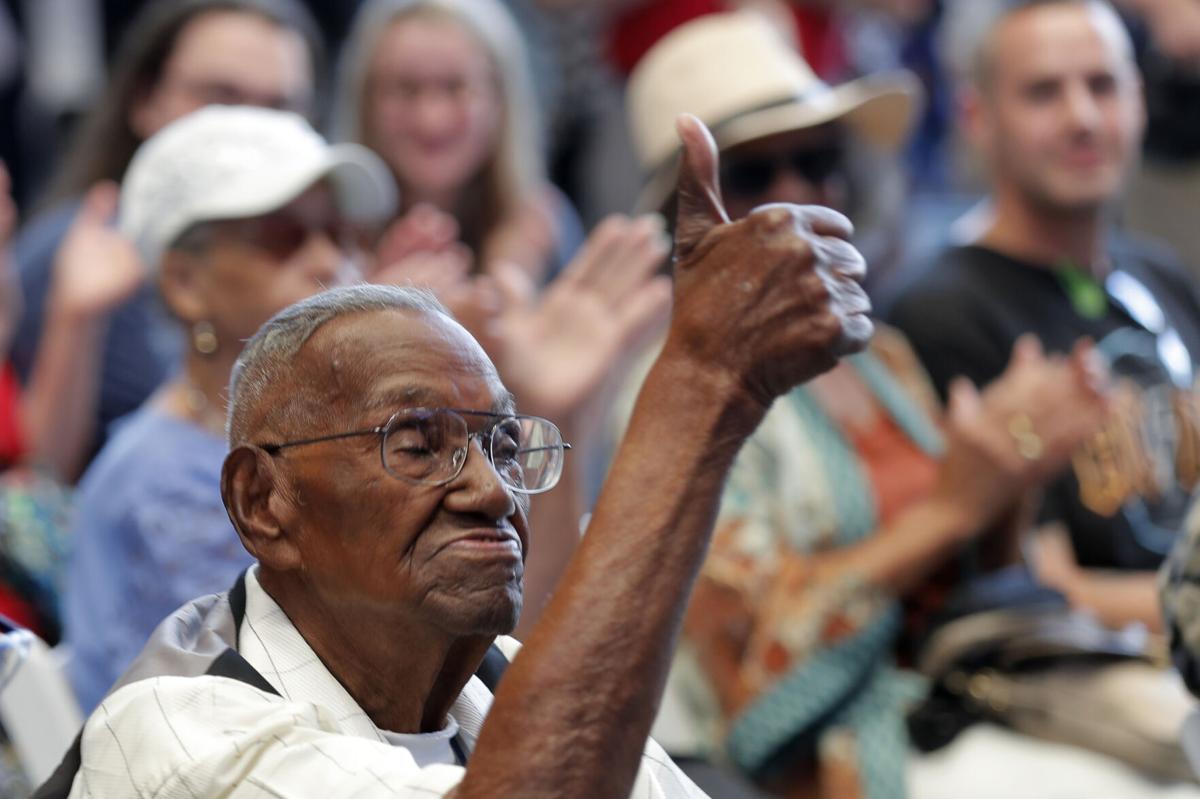