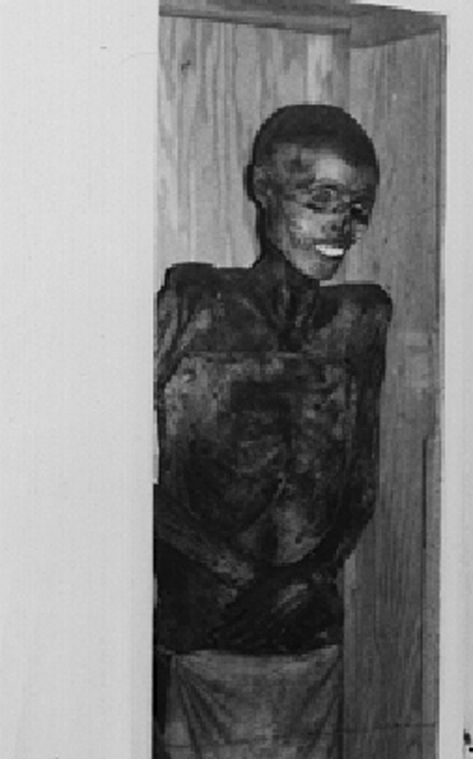 CONTRIBUTED Cancetto Farmica, hanging in the McDougald Funeral Home in Laurinburg, circa 1950. 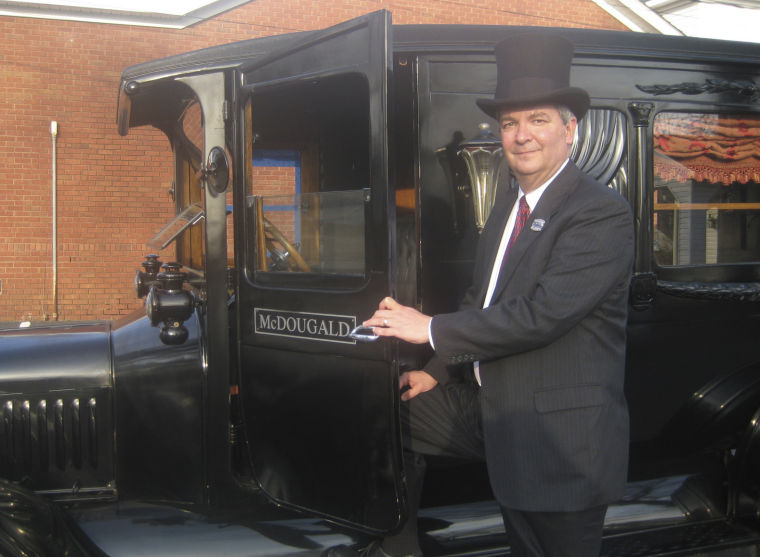 BY TIM BULLARD Special to the Morning News

LAURINGBURG, N.C. – Sullen, empty eyes stared back, sunken from within a skull inside a plywood box in the garage at McDougald Funeral Home where a mummy named “Spaghetti” was hanging.

That body in the garage was quite a ghoulish sight for a youngster who had never seen anything like it before.

Spaghetti hung there, and other places around town, for nearly 60 years. He was the prized possession of the McDougald family, which ran, and still runs, the local funeral home.

Spaghetti’s tale ended, or began, in Marlboro County about 20 miles from this funeral parlor. That’s where he originally crossed paths with the McDougalds.

Beacham McDougald operates the funeral home now. His rich Southern accent reveals a compassionate side. which he is able to capitalize on when working with grieving relatives.

“Back in 1880 my great-grandfather was a carpenter and cabinet maker with the railroad,” McDougald said. “The railroad decided they were going to move the railroad yard to Hamlet. He didn’t want to move, so he started a furniture and undertaking business. So his two sons, Will and Dan, went into business with him. Then after he died, a third and younger son, Beacham’s grandfather, Malcolm, went off to mortuary college and also joined the family business.”

The mummified corpse was not, of course, named Spaghetti. His name was Cancetto Farmica. He was a traveling carny worker with a carnival outfit that had stopped in nearby McColl.

“Somehow in setting up, he got into an argument with another person, and that person picked up a tent stob or stake, and he was clubbed over the head with it,” McDouglad said. “They loaded him up on a horse and buggy and took him to Laurinburg to the nearest hospital.”

That happened on April 29, 1911. The clubbing was a pretty good one. Farmica died when he got to Laurinburg.

McDougald said the authorities, “called up Granddaddy to embalm him, which he did.” It was an all-around sad story. Farmica was a newfound immigrant. His father was working with another sideshow somewhere else. He came up to Laurinburg to claim the remains. He needed an interpreter because he was from Italy. He couldn’t afford the work that had been done or the expense of moving his son, but he did put down a $10 deposit, according to an article written on Spaghetti by Sandy Barrett, the son of Laurinburg’s mayor.

“I understand the local Catholic priest interpreted it,” McDouglad said.

The family wanted the body returned to Italy and by no means was he to be buried in a non-Catholic cemetery. Fair enough, but that wasn’t easy.

“If you know, there were no Catholic cemeteries in Laurinburg,” McDouglad said.

The family was told how much it would cost to put Spaghetti on a train and boat to Italy.

“Nothing more was heard from them,” he said. “So we had a body on our hands, which over the years mummified and over the years became part of a local legend. He was kept on the third floor of the McDougald building in downtown Laurinburg. People came in and looked at him. That legend spread around, and he was moved because (the family) lost that building in the Great Depression. We are in the fourth building since then.”

He was featured on CBS News with Steve Hartman, on a BBC show called “Curious World” and on WRAL-TV in Raleigh.

Spaghetti was finally laid to rest in 1972 when politics became involved.

“In 1972, an election year, there was a congressman named Mario Biaggi running in New York,” said McDougald. “(Biaggi) was not ahead in the polls, so to speak. Just with any politicians, news is news, as long as it is publicity. He picked up on this Spaghetti thing as being derogatory to Italians.”

Under pressure from the congressman, the McDougalds arranged a service for their longstanding, or hanging, customer. There was a Catholic graveside service. A priest from Hamlet, N.C., came to provide the service.

“It was a real nice service. There were about 200 people there,” McDougald said.

McDougald loves Laurinburg and serves on the Tourism Development Board. The 61-year-old has used an old Model T hearse in services, and it has become a familiar vehicle in town.

“I was born and raised here. My family has been here since the 1800s. My roots are here,” he said. “Laurinburg just kind of grew on me. Even though it was a city with problems like any other city, it’s a wonderful city with wonderful people. I find it just to be no place like home.”

Bolivian Cholitas play football at top of a mountain

Bolivian Cholitas play football at top of a mountain

FLORENCE, S.C. -- As Thursday morning's retirement ceremony for Clemson Extension Agent Tony Melton -- only the first of such ceremonies planned -- there were no fewer than eight different group photos taken with him at the center of the group.

Florence One Schools English and language arts curriculum getting revamped

FLORENCE, S.C. – The English and language arts curriculum of Florence One Schools has been revamped.

CONTRIBUTED Cancetto Farmica, hanging in the McDougald Funeral Home in Laurinburg, circa 1950.