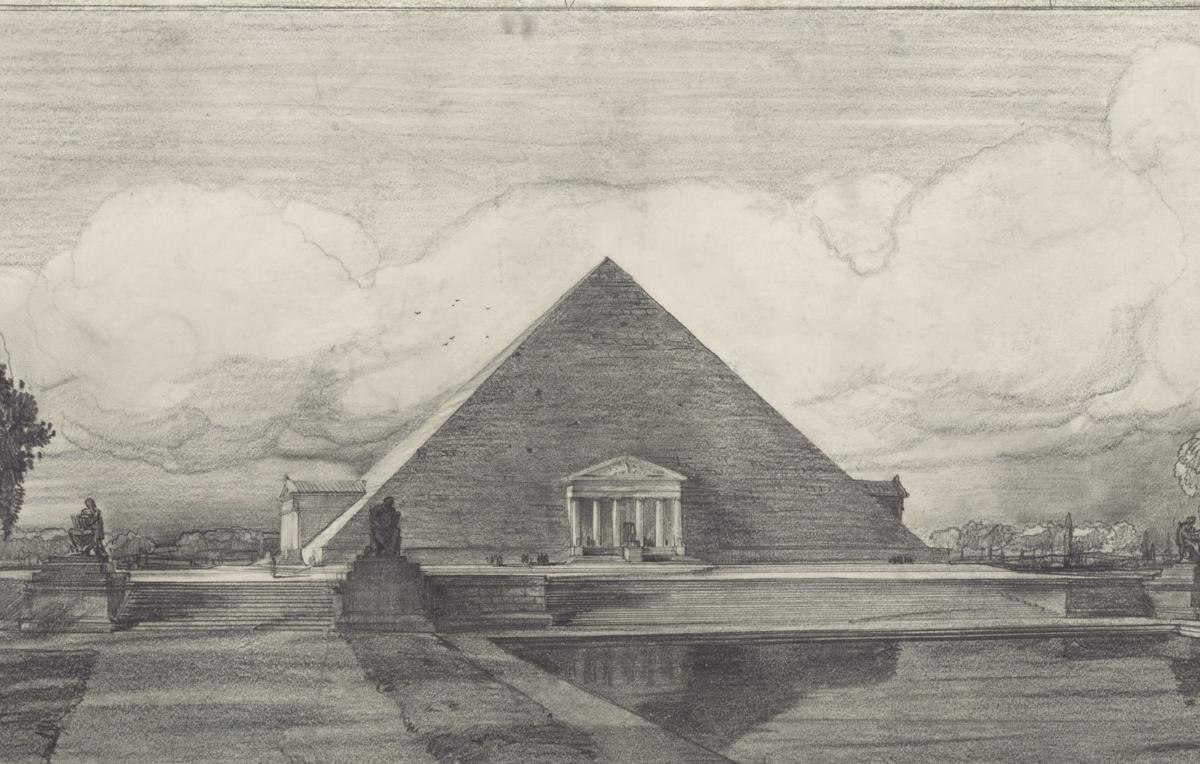 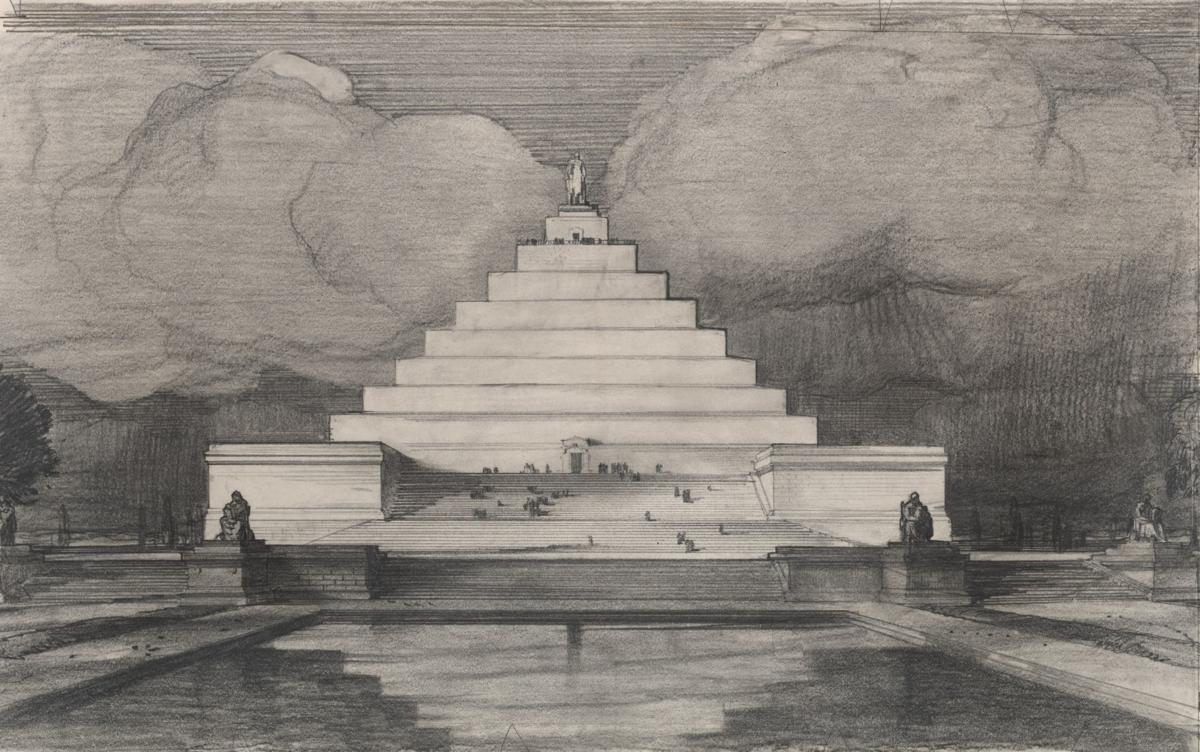 WASHINGTON — The memorial to President Abraham Lincoln was a sight to behold. A gleaming white, pyramid-shaped structure that resembled a giant cake with eight layers rising high above the Mall. At the top stood a statue of the Great Emancipator himself.

That is what the Lincoln Memorial would look like if architect John Russell Pope's proposal had been adopted in 1912. Just a year earlier, lawmakers authorized $2 million to build a memorial to Lincoln. They appointed a seven-member commission headed by President William Howard Taft to recommend the design, but the final decision was up to Congress. After further debate and construction delay, the memorial was dedicated 97 years ago this week.

Pope's pyramid scheme was one of several ideas he submitted in a competition with fellow New Yorker Henry Bacon. Pope's terraced pyramid was styled after the ziggurat temple towers of ancient Mesopotamia, the "cradle of democracy." The architect also suggested a four-sided, Egyptian-style pyramid, with portico entrances on each side.

The concept of an Egyptian pyramid wasn't all that far-fetched. The neighboring Washington Monument, after all, is styled after an Egyptian obelisk.

Pope wasn't the first to propose a pyramid for a national landmark. In 1800, Congress approved a plan by Benjamin Latrobe, the designer of the U.S. Capitol, to construct a pyramid with a floor 100 feet deep as a mausoleum for the remains of President George Washington. But the project was never funded. In 1837, architect Peter Force proposed to build the Washington Monument as a pyramid.

Pope's ideas for a memorial to Lincoln weren't as bizarre as one proposed in 1867 by Clark Mills, who designed the equestrian statue of Andrew Jackson in Lafayette Square across from the White House. Mills proposed to build next to the U.S. Capitol a 70-foot high bronze structure with no fewer than 36 separate figures, including six on horseback. Topping the memorial would be a statue of a seated Abraham Lincoln signing the Emancipation Proclamation.

The choices for the Lincoln Memorial in the early 1900s weren't limited to statues and structures. Many influential lawmakers and the fledgling automobile lobby pressed for building a "splendid boulevard" between the nation's capital and Gettysburg, Pa., where President Lincoln delivered his Gettysburg Address on Nov. 19, 1863. House Speaker James Beauchamp "Champ" Clark, a Missouri Democrat, offered the ultimate argument for the highway. "If Abraham Lincoln could be consulted about spending $2 million to build him a memorial," Clark said, "he would undoubtedly want one that would do somebody that is now living or to live hereafter some good."

The idea of a divided highway was dismissed as folly. An Abraham Lincoln Memorial Highway "would be lined with saloons, road houses, merry go-rounds and whatnot, and would be disgrace rather than a fitting tribute to that great historic figure," scoffed Glenn Brown, secretary of the American Institute of Architects.

Even the memorial site stirred controversy. The commission planned to build it in Potomac Park next to the Washington Monument. At the time, this was a remote, swampy area infested with mosquitoes. Legendary former House speaker "Uncle Joe" Cannon, a Republican from Lincoln's home state of Illinois, vehemently opposed the site. "So long as I live," he declared, "I'll never let a memorial to Abraham Lincoln be erected in that g-------d swamp." Cannon preferred a statue at Union Station near Capitol Hill.

The commission and Congress ultimately agreed to upgrade the Potomac Park site and approved architect Bacon's proposal to build a huge, neoclassical Greek Doric temple. The temple was based on the Parthenon in Athens. Bacon believed that "a memorial to the man who defended democracy should be modeled after a structure from the birthplace of Democracy," according to the National Park Service.

Bacon's plan called for placing a statue of Lincoln inside the 99-foot-high temple. The commission chose sculptor Daniel Chester French to design the statue. After seeing how huge the temple would be, French upgraded his planned statue of a 10-foot high, seated Lincoln to 19 feet, plus an 11-foot base.

Bacon's design drew wide praise, but also criticism. The Illinois chapter of the American Institute of Architects passed a resolution calling Bacon's design "purely Greek and entirely un-American." Sculptor Gutzon Borglum complained, "We are about to spend $2 million upon a . . . cold, classical meaningless temple" with no mark outside about the humble man it memorializes. "Into the middle of that," he said, "we are going to drop a statue of Lincoln" and "upon the doormat we are going to put 'Lincoln Memorial.' "

World War I slowed work on the final memorial, which ended up costing nearly $3 million, equal to more than $45 million today. Finally, the dedication was set for Memorial Day, May 30, 1922. About 50,000 people attended, including 78-year-old Robert Todd Lincoln, the late president's only surviving son.

The crowd honoring the Great Emancipator was racially segregated. Keynote speaker Robert Moton, principal of the Tuskegee Institute, was the only African American orator. And he wasn't allowed to sit at the speakers' table. Organizers picked Moton because of his moderate views on race, and they censored part of his advance speech. Moton departed from his prepared speech to note that "among 30,000 persons convicted of disloyalty during the last [Civil] war, not a single one was colored."

Former president William Taft, now the U.S. chief justice, presented the memorial to President Warren Harding, who also addressed the crowd. Everyone could hear the speeches, newspapers reported, because of the use of new devices called "loudspeakers."

Soon after, a reflecting pool was added between the Lincoln Memorial and the Washington Monument. The memorial became a site for civil rights activities. On Easter Sunday 1939, African American Marian Anderson sang "America" from the steps of the Lincoln Memorial after being banned at the Daughter of the American Revolution's Constitution Hall because of her race.

In 1963, the Rev. Martin Luther King gave his "I have a dream speech" from the Lincoln Memorial.

Today the Bacon-French Lincoln Memorial is the most visited of all the monuments in Washington, drawing more than 7 million people a year. While Pope didn't get his pyramid designs accepted, his presence is felt throughout the nation's capital. He designed the Jefferson Memorial, Constitution Hall and the West Building of the National Gallery of Art.

Watch Now: Seniors struggle to get the vaccine

Watch Now: Seniors struggle to get the vaccine