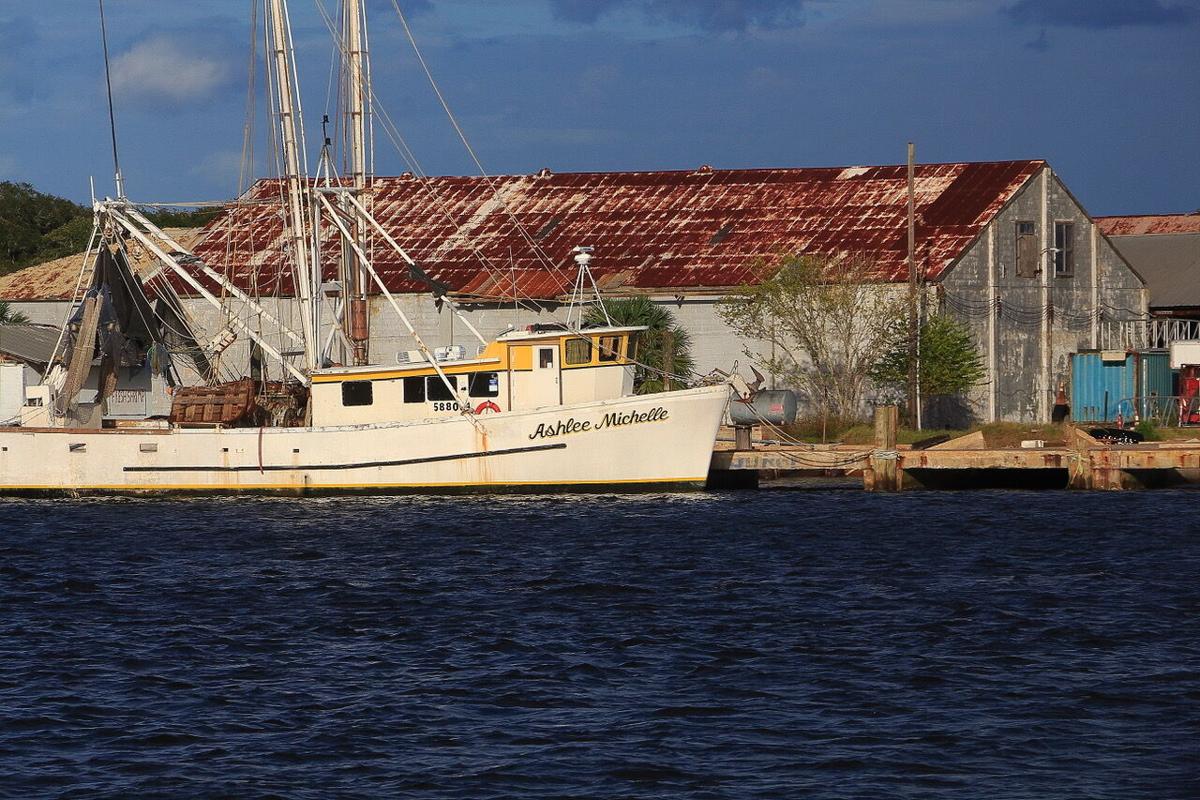 The Ashlee Michelle shrimp boat is part of a changing industry.

Photographers love to shoot them at sunrise. Riding a glittering golden sea, shrimp boats strike a classic silhouette with that orb of fire rising behind them. A shrimp trawler working coastal waters ranks right up there with other iconic coastal scenes … elegant sea oats at sunset, a classic lighthouse, workboats in a marsh, and a cast net at full extension.

Nowadays my trips to the beach and explorations along coastal stretches turn up fewer and fewer shrimp boats. It’s a sad commentary on modern times: photos of trawlers at dawn are not easy to get. You don’t see shrimp trawlers working the sea like you once did. You don’t see them coming in with their photogenic outriggers up. To be clear, trawlers still work the sea but nowhere in numbers like they once did. You have to work to find them these days. Vacationers don’t expect to look up from your beach lounge chair and see trawlers on the horizon. You might see one. Maybe.

Times were you’d see them out at sea working, nets out, capturing shrimp. Beachgoers would see several trawlers with nets up coming home with a haul. Beachgoers and locals alike knew where to get fresh-caught shrimp and it was no marketing spin. It was the real deal, but those days are slipping away.

Glorified in song, “Shrimp boats is a-comin’” heralded the romance of the sea and the men who worked it. An old salt of a captain with a snow-white beard like Hemingway braving the elements to reel in shrimp seemed gallant, a hero. There’s nothing gallant about putting a bag of frozen shrimp in a sink full of water. Nothing heroic about cutting open a plastic bag of thawed shrimp. Give me fresh-cut roses, not plastic ones. But that’s where we are. These days shrimp boats aren’t a-coming, they’re a-goin’. No, you just don’t see shrimp trawlers much.

Regulations, pollution, imports, inaccessible shrimping grounds, mariculture, maintenance costs, aging fleets, and other factors have put the hurt on the shrimping industry. Adverse effects on fish and other species pose problems. Shrimping like so many other areas of life has grown more and more complicated, less and less profitable.

I’m sure getting workers isn’t as easy as it once was. The work is hard. Tough hours. Tough conditions. And perilous. Like other boats, shrimp trawlers sink, burn, and suffer adversities that only the sea can throw at them.

“Walk a mile in my shoes” goes the saying. Lowcountry fisherman and shrimper Woody Collins of Beaufort, South Carolina, knows the deal. He walked the walk and wrote “Where Have All of the Shrimp Boats Gone?,” a 100-year history of the shrimping industry in the South Carolina Lowcountry.

An insider’s story, it’s told by a man who was involved in the industry for about 60 years. Collins began his shrimping career as a boy growing up in the 1950s in Beaufort and Port Royal. “I didn’t come from a fishing family,” he said in an interview. “I was the same age as boys whose daddies owned shrimp boats. If you showed an interest, you’d end up working on them.”

Men like Collins watched as change silenced diesel engines. “From Texas to North Carolina,” said Collins, “boats that don’t work are just sitting at docks.” As Otis sang, they’re “sitting at the dock of the bay.” They’re sure not out on the sea like they once were.

The silencing of trawler engines goes on here and in other states. Shrimp boats no longer ride into a rising sun. They’re trawling into a setting sun, and yet another coastal icon vanishes.

Years ago as kids, Mark Koenig and I came up with what has come be known in philosophical circles as the “Jelly Donut Theory.” Little did we realize at the time how far reaching and robust its implications would be.

The recent failings (in my opinion) of NFL superstar quarterback, Aaron Rogers (who plays for the Green Bay Packers), supplied me with the impetus for this article. His twisting of the truth to make it seem that he had been vaccinated with one of the COVID-19 vaccines by using the term, “I have been immunized” is both misleading and a betrayal.

Remember those "shovel-ready jobs" promised by the Obama-Biden administration in 2011? When many failed to appear after passage of this spending boondoggle, President Obama joked, "Shovel-ready was not as shovel-ready as we expected."

LETTER TO THE EDITOR:

Do you really think taking guns from law-abiding citizens would decrease violent crime?

Too many men are stuck in a cycle of "idleness and pornography and video games."

The fix has been in by members of the S.C. House for a long time. For months, they’ve been actors in a theatrical drama of their own creation to make it look like newly redrawn voting districts are fair.

The Biden administration’s “Build Back Better Plan” is currently sitting at a hefty 2,500 pages – more than 100 times larger than The Communist Manifesto, a 23-page pamphlet. And the proposed spending would make even Marx and Engels blush.

She dried sliced apple, peaches, and pears on a slanted wooden table facing the sun.

If Bill Murray were to star in a sequel to Groundhog Day, he’d wake up to the Sonny and Cher alarm clock, take the cold shower, step in the puddle, parry the insurance agent, trudge to the gazebo…and see Chris Christie doing his same old song and dance.

The Ashlee Michelle shrimp boat is part of a changing industry.