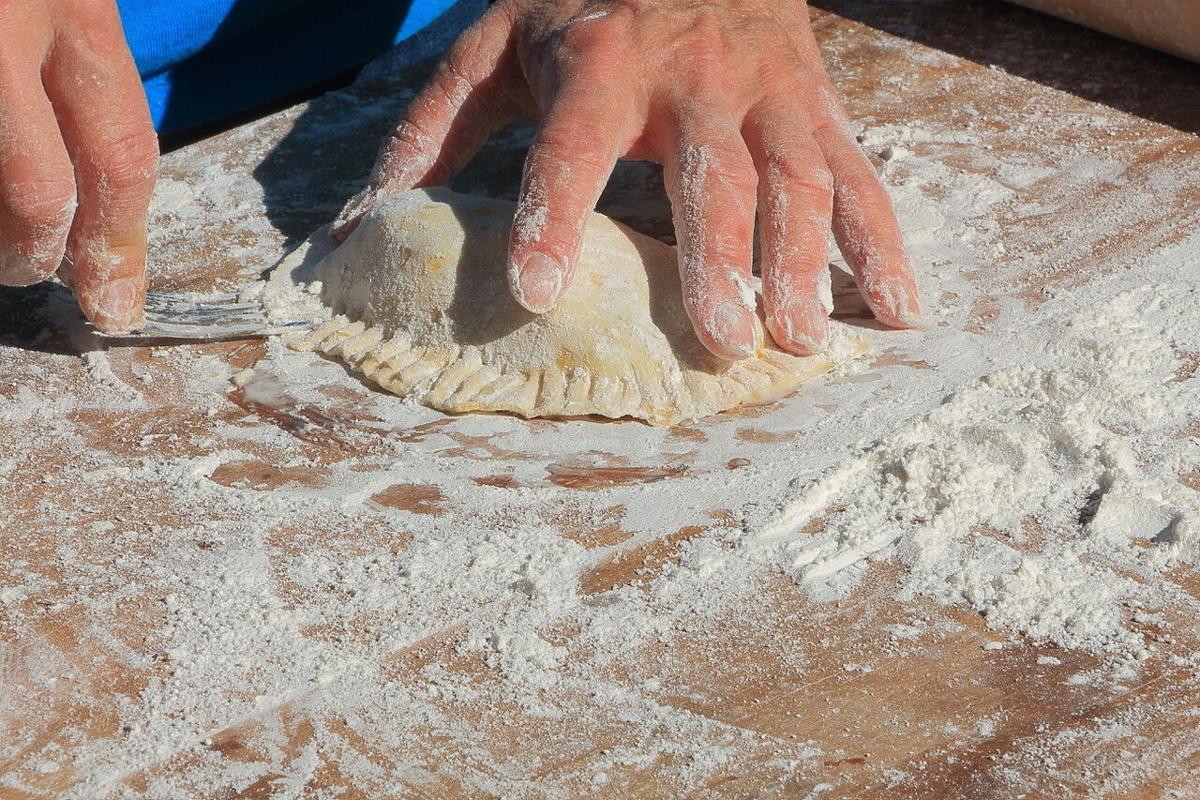 The cook uses a fork to crimp the crust for a fried pie. 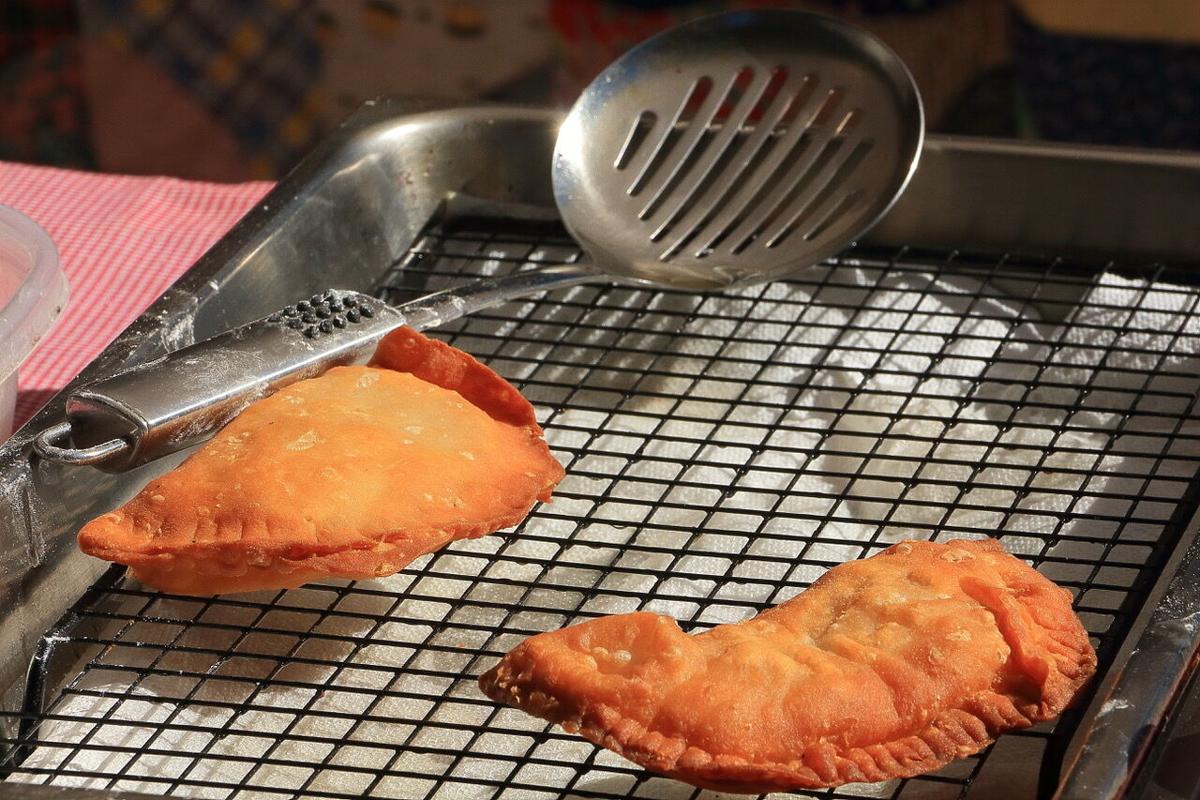 Fried pies are a savory part of Americana.

She dried sliced apple, peaches, and pears on a slanted wooden table facing the sun.

Nails prevented the fruit from sliding to the ground. Once it dried to her taste, Grandmom Walker waited for a cold day. Then she mixed up some dough, prepped the fruit, and placed it into a circle of dough, which she folded into a pocket. Into a kettle of boiling oil it went. Oil bubbled and gurgled as wood coals spat and hissed and the fragrance of fresh-made fruit pies filled the air.

Fried pies, a scene straight out of Americana.

Some of us silver-haired nostalgic types recall fried pies with fond memories. Seems to me it was during the colder months that we enjoyed such treats. The sun had taken a while to dry the fruit and working over a black kettle sitting over a bed of red coals was hot work. And besides, cooler air better carried the fragrance of cinnamon, sugar, and frying peaches and apples.

Fried pies. They were far superior to the boxed, cellophane-wrapped pies you buy in convenience stores. Who knows how old those too-sugary pies are? For sure they are mass-produced. Here’s the clincher. There was nothing mass-produced or convenient about Grandmom’s pies. Her pies were the clichéd labor of love except it was no cliché. Folks in my grandparents’ day grew fruit trees. They spent years working those trees. They harvested apples, peaches, and pears and dried them out. Freezing had not made the scene, not yet. Then one magical cold day the making of the pies commenced to the delight of a lot of kids who recall those wonderful times.

The wonderful times live on here and there, the ambrosial remainders of yesteryear I’ll call them. One Thanksgiving, my sister, Deb, made some old-fashioned fried pies and they were fabulous. And then last Sunday driving a back road up near the drowned town of Petersburg, Georgia, it was my good luck to discover a woman who still makes fried pies the old-fashioned way.

Teresa Crane Smallwood, a fast-moving auburn-haired woman who drinks four pots of coffee a day, stood over a 200-year-old table. A wooden rolling pin dusted with flour did its thing, and she worked with precision and beauty readying pies for the kettle, rolling dough, sealing fruit in with a swath of water, crimping pies edges with a fork, and dropping them into gurgling boiling oil in a black kettle. At 325 degrees Fahrenheit, it didn’t take long for the pies to turn into golden, juicy delicacies. Rolled into a sugar-cinnamon mix (a favorite additive of old-timey snuff dippers), the pies sweetened a tad more and then a snow-like dusting from an old hand-cranked flour sifter prettied them up nicely.

Teresa hails from Commerce, Georgia, but she was born in the North Georgia mountains of Rabun County, Georgia. She operates Mountain Heritage Canning. She makes award-winning jellies, pork skins, and candied pecans. She “cans the old-timey way, one small batch at a time.” I came back with fried pies, some pork skins, and a jar of pear jelly, which is almost gone already, but her pies are the stars of her artistry.

Yet again, the back roads of the South pleased me to no end. I’ll find Teresa again I’m certain because what she sells is not just good food. She sells something rare—tangible evidence of my fond memories of Grandmom’s fabulous pies, and I suspect you wouldn’t mind purchasing a slice of the past yourself. Why not? Bring your memories alive one more time. And another and another.

Trials are a contest between dueling narratives.

Years ago as kids, Mark Koenig and I came up with what has come be known in philosophical circles as the “Jelly Donut Theory.” Little did we realize at the time how far reaching and robust its implications would be.

Before the right to keep and bear arms is stated in the Second Amendment, the Founders wrote why they believed it necessary for people to arm themselves as part of a "militia." They said it is a "necessity to the security of a free state." The Founders knew that liberty is not the natural state of humanity and must be defended against government authorities and lawbreakers who try to limit or abolish it. That is why the Preamble to the Constitution begins: "We the people," not you the government.

The Biden administration’s “Build Back Better Plan” is currently sitting at a hefty 2,500 pages – more than 100 times larger than The Communist Manifesto, a 23-page pamphlet. And the proposed spending would make even Marx and Engels blush.

If Bill Murray were to star in a sequel to Groundhog Day, he’d wake up to the Sonny and Cher alarm clock, take the cold shower, step in the puddle, parry the insurance agent, trudge to the gazebo…and see Chris Christie doing his same old song and dance.

The recent failings (in my opinion) of NFL superstar quarterback, Aaron Rogers (who plays for the Green Bay Packers), supplied me with the impetus for this article. His twisting of the truth to make it seem that he had been vaccinated with one of the COVID-19 vaccines by using the term, “I have been immunized” is both misleading and a betrayal.

The states experienced a major upheaval of the economic success that preceded the pandemic this year, but, like clockwork, we have overcome one step at a time.

ANDY BRACK: We know better, but we don’t act appropriately

There’s a big difference between knowing something, understanding it and doing something about it.

The Ethical Life podcast: What does it mean to be a good COVID citizen?

Remember those "shovel-ready jobs" promised by the Obama-Biden administration in 2011? When many failed to appear after passage of this spending boondoggle, President Obama joked, "Shovel-ready was not as shovel-ready as we expected."

The cook uses a fork to crimp the crust for a fried pie.

Fried pies are a savory part of Americana.