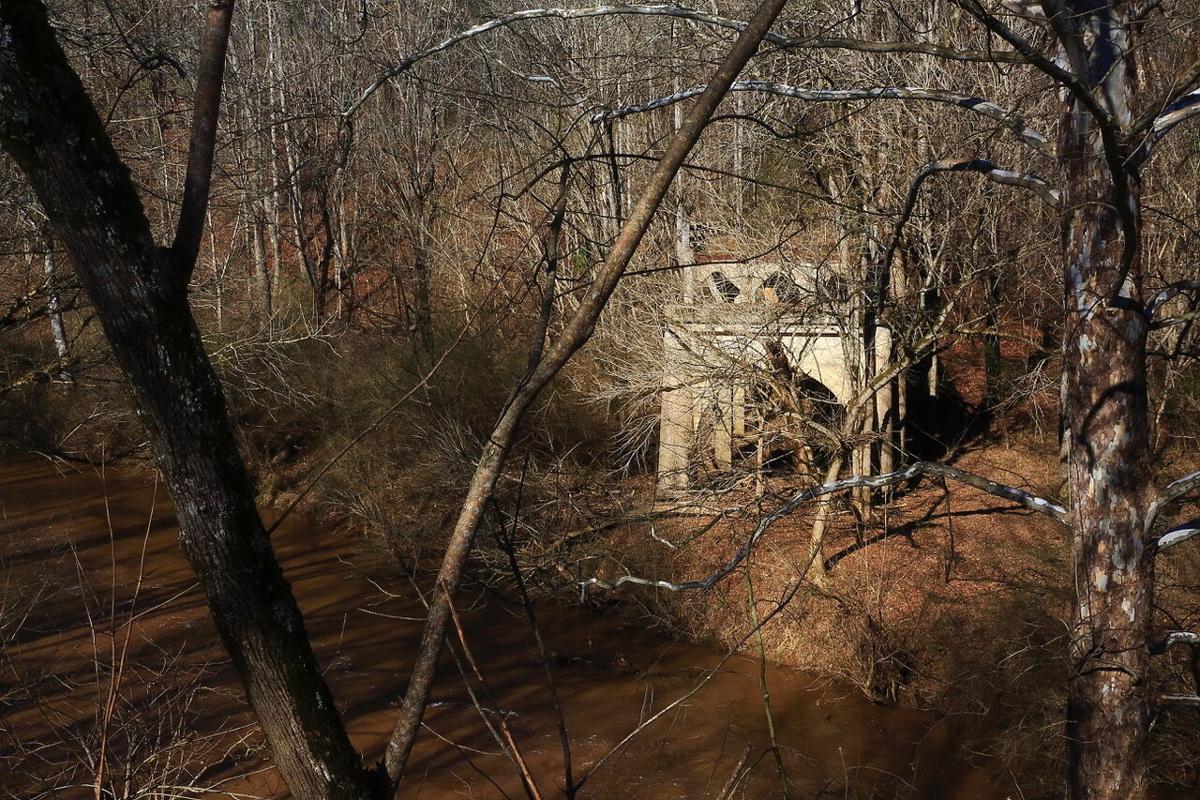 This is the north end of the abandoned bridge. 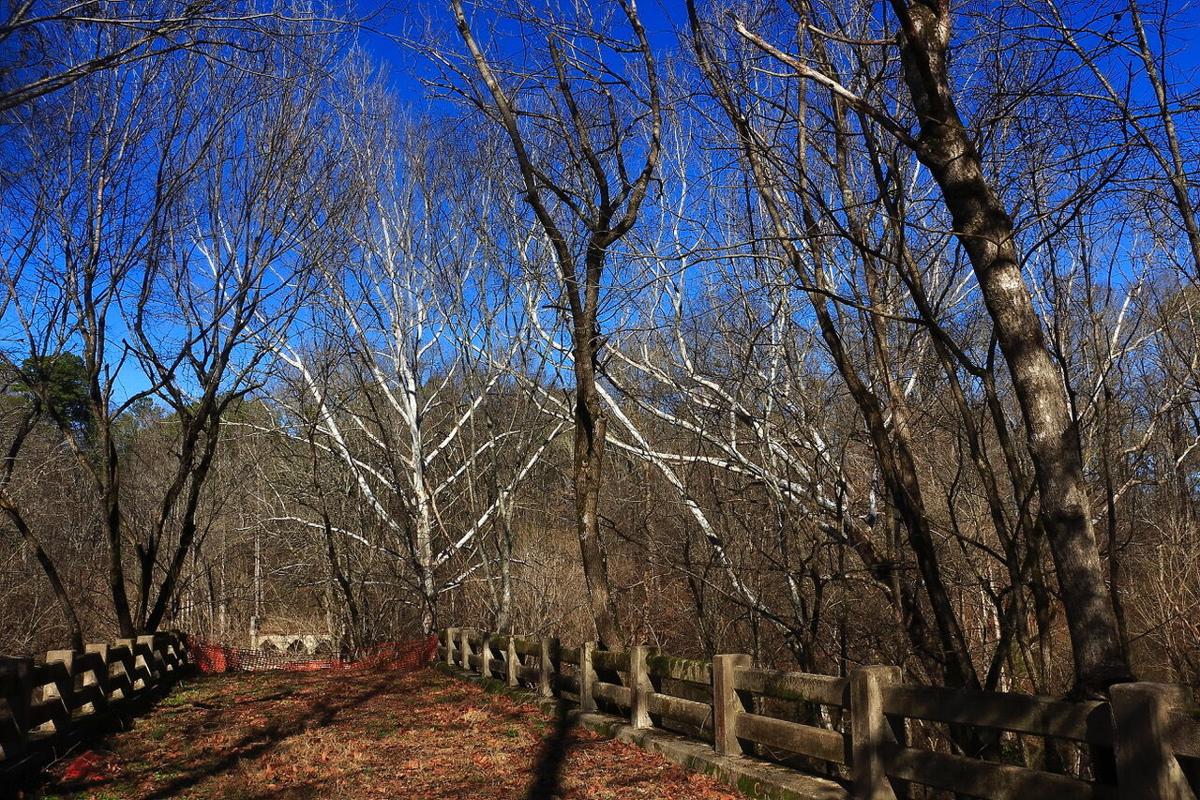 When man abandoned it, the traffic diverted west, and the forest began to claim it. Today, sycamores, cedars, and oaks console it, and wind and water song replace the hum of tires. If you know when and where to look, you can glimpse this noble ruin of the South.

A mere second, my glimpse, but it whispered, “Take time to visit me,” so I did. I knew the place would give me a good feeling, and it did. The place? The old U.S. Highway 25 bridge that used to straddle Turkey Creek.

“Yes, men cut away its mid-section.”

Now like bookends, its truncated ends stare at each other across a westward-flowing creek. You won’t see books suspended midair, but this place is a book, and it deserves to be in a book, and I just might put it in one. In winter light, the north end looked Romanesque. The snow-white limbs of sycamores added brilliance to the dry brown of January, and the azure sky reigned perfect, not a cloud in the sky. Only man’s orange safety netting, a band-aid of sorts, marred the setting. Rains had the creek swollen and muddy, a chocolate-colored torrent.

I like ruins. I’ve been to Rome’s Coliseum. I like going to the Glendale Ruins up Sparkle City way. I’ve never been to Cumberland Island’s Dungeness Ruins, but I will. Best of all I like the ruins beneath my nose, the ones no one cares about but me. And so it was I found myself walking toward this old bridge. On the way in I walked past coyote scat and a deer stand. A refugee from the Old West and primal instincts seek safe harbor here near this bridge to the past.

When I got to the old bridge, right off I noticed that missing midsection. I noticed, too, two strange steel towers, green moss, white quartz embedded in gray concrete, and those dazzling sycamores — a majestic setting for majestic ruins. This bridge speaks to me. “Like you, I was younger and essential once, but to see me is to see your future.”

Time and something called progress leave many a bridge behind. Many get razed, like the vanquished Silas N. Pearson/Cooper River Bridge. But the old Highway 25 Bridge stands still, and it gives me that ancient Rome vibe. It’s truly a bridge to the past. I think of old makes and models of cars and trucks it ferried north and south. Old Coca Cola trucks. Women in labor. Men bound for labor. Surely an old crew from the abandoned chain gang camp five miles south worked the highway here. Come torrid summer days I bet they leaned over those concrete guardrails and dreamed they were swimming. The chain gangs are dead now. All those trucks and cars rusted to death. Those who built the bridge are dead. Those who traveled it? Many are dead. When you and I are dead, it will still be there as it holds its place among the ranks of forlorn bridges forced into retirement.

On a cold, windy afternoon I stood on the old bridge’s south end watching the newer distant bridge ferry traffic across a creek turned small river when rains come. None, I daresay, knew a man was watching from the past, but I was, a witness to God Change. I watched them speed along oblivious to the old bridge and God Change who’s patiently waiting for them as well.

MICHAEL GOINGS: A bundle of joy who was born spoiled

One of the greatest days of my life took place on Feb. 4, 2021. My first grandchild was born, E’Lisha Noelle Rouse. I am going to devote and dedicate my article today to expressing the joy and pleasure that her birth and arrival have brought to me.

LETTER TO THE EDITOR: Why Jay Jordan for Senate District 31

Jay Jordan has been in the state House working for our area for the last seven years. However, I don’t consider him a politician in the normal…

LETTER TO THE EDITOR: Club for Growth's scores for Jay Jordan exaggerated

The South Carolina Club for Growth seems to inadequately explain its methodology for creating annual legislative scores for House and Senate members.

For some reason the New Year made me think of the the 3 Bs for improvement — no, not Build Back Better,  but rather, Brains, Beauty and Brawn.

LETTER TO THE EDITOR: Florence needs Jordan as senator

ANDY BRACK: Want to make a difference? Get involved

For a teenager in the 1970s, the Boy Scout Handbook offered an escape into a practical world that provided answers to lots of things for a young, curious mind: how to tie knots, start campfires, safely hike and camp in the woods, use a compass, identify trees and track animals. Manuals for merit badges provided more detailed information on everything from survival to citizenship. (In my view, the Boy Scouts’ three merit badge manuals on citizenship – for the community, nation and world – are better than the civics materials provided in school.)

Hypocrisy and lies from politicians are so rampant in Washington that hardly anyone pays them much attention anymore. Perhaps that is why our cynicism about so many things political deepens and distrust of our institutions is pervasive.

When I opened the refrigerator door, I found myself starring at recycled Cool Whip bowls. There were three of the Cool Whip brands, a Food Lion whipped topping bowl, an extra-large Country Crock butter container, a large red plastic bowl that once contained Christmas sugar cookies, and some Zip Lock plastic containers with contents unknown.

This state Senate race is a very passionate one for both candidates and their supporters. But it is beginning to incite sides in the Republica…

Richard Kyte: Tolerance of profanity is a cultural failing

Commentary: We should not be complacent about the way the words we use shape our perception of the world around us.

This is the north end of the abandoned bridge.