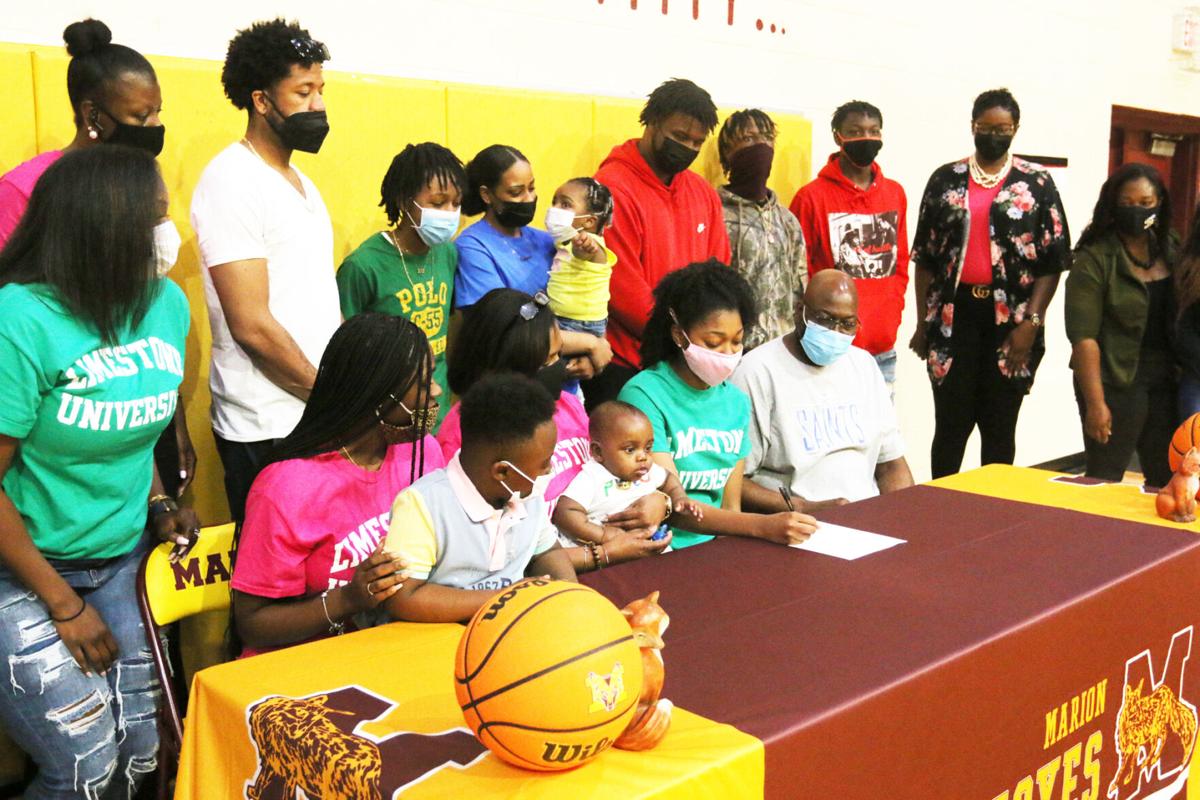 Marion High School senior Kimmie Barnes signs a letter of intent to play basketball at Limestone University on May 3, 2021. 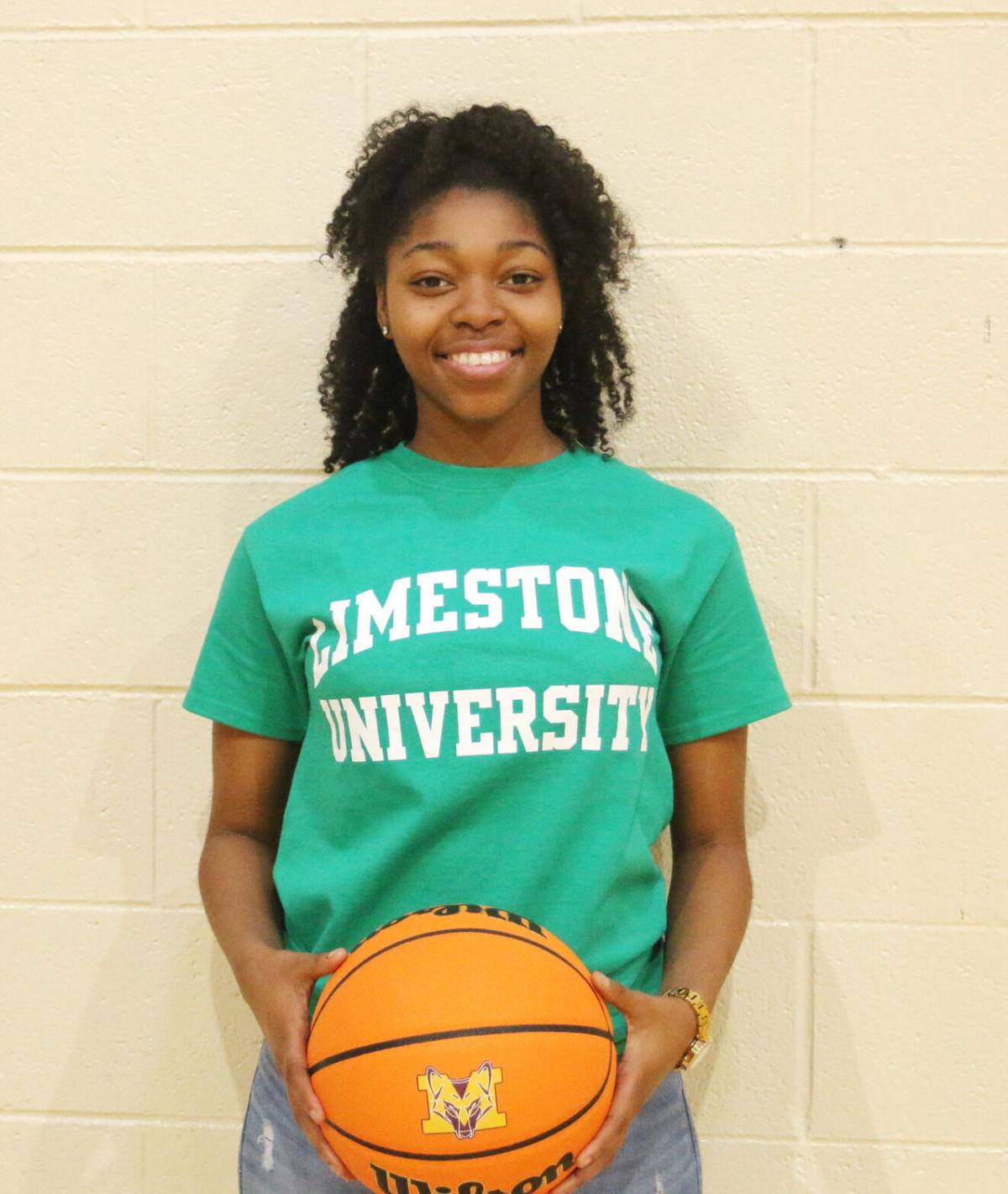 Kimbrie'l Barnes is taking her game to Limestone University to join the Saints women’s basketball program. Barnes was named All State leading Marion as a four-year player. 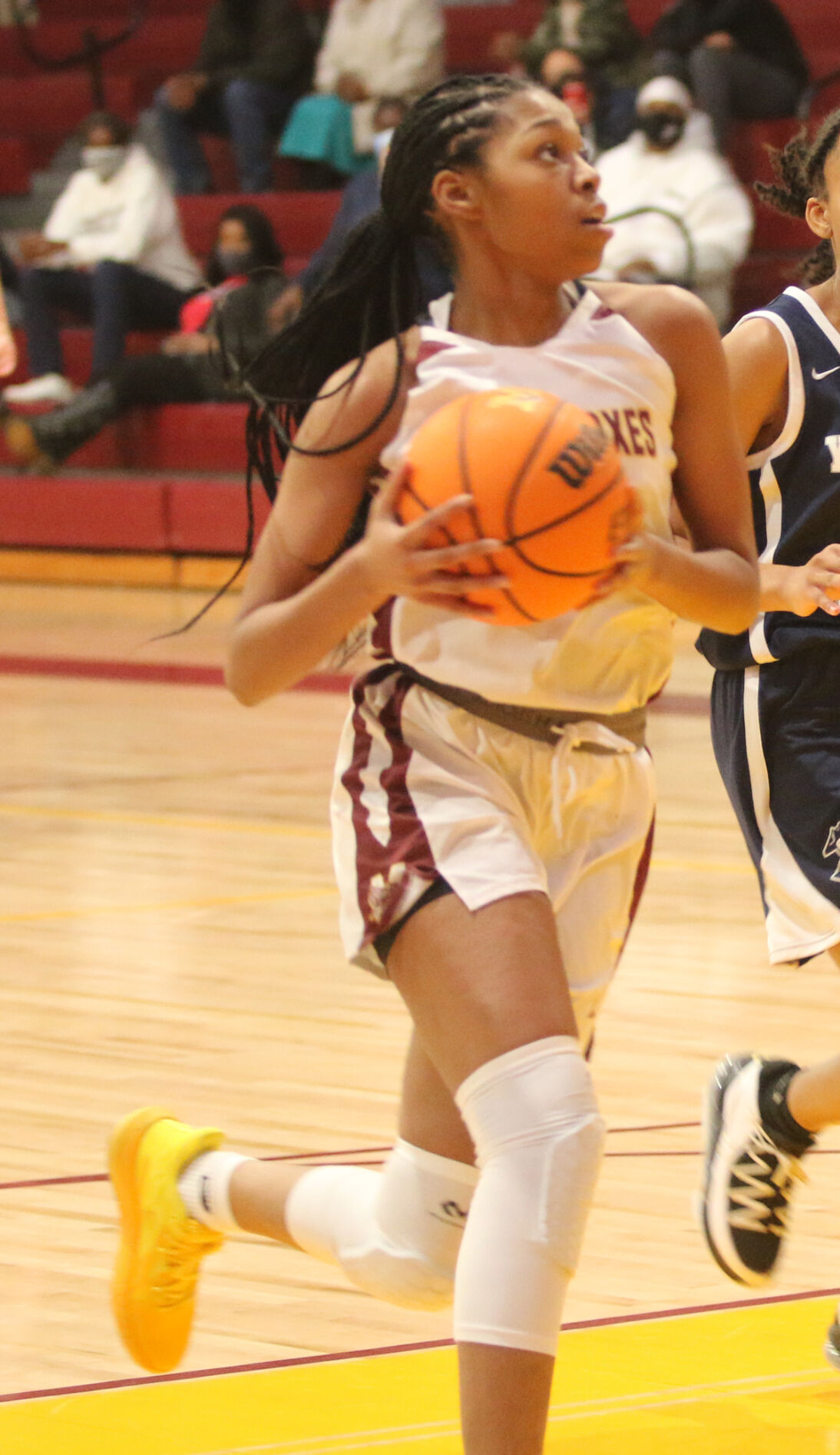 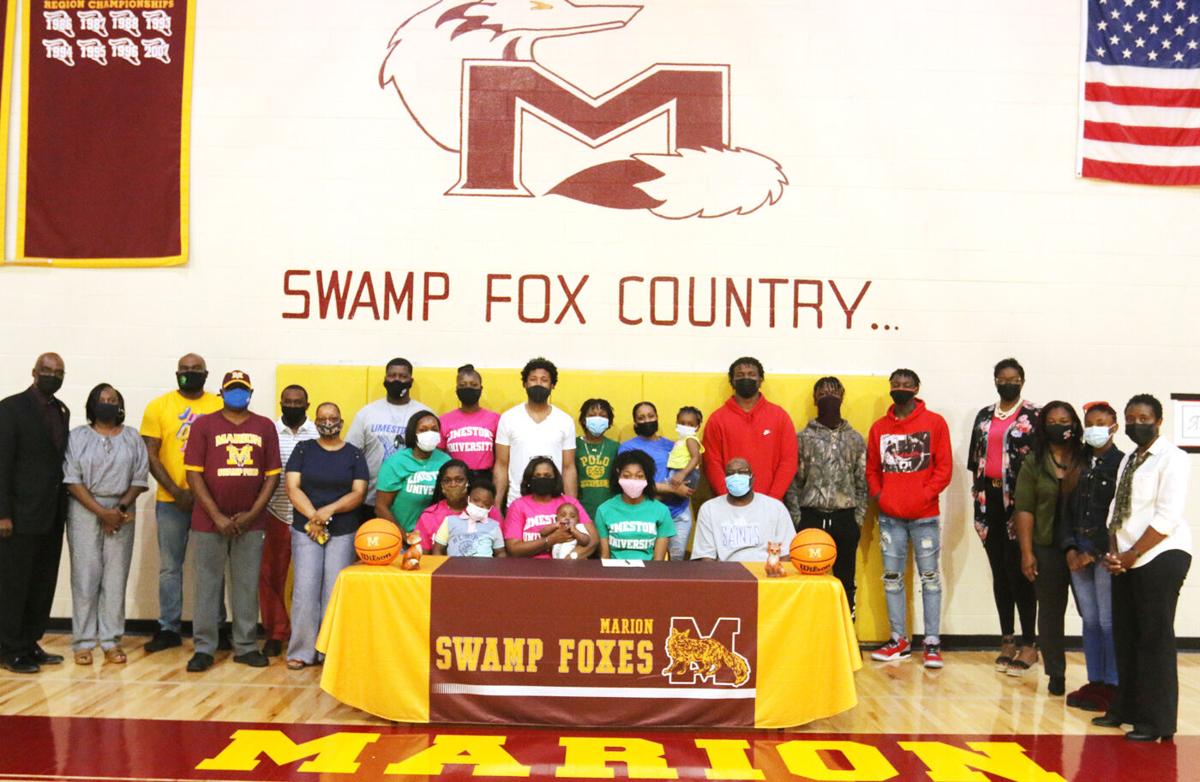 “I’m overwhelmed and it was very emotional though because I will be leaving everybody soon,” Barnes said of the more than 20 people in attendance to support at the signing ceremony.

Barnes said out of several options it was the visit to Limestone College that helped lead to the decision to join the Saints women’s basketball program.

“When I visited the campus it was so nice and the coaches there were great,” Barnes said. “They were all sweet to me and I also met some of my teammates and they were nice.”

“Kimmie” Barnes is another four-year starter for the Lady Swamp Foxes named All-State. She averaged 12 points per game leading the squad to 2020 Class 2A state championship appearance and a pair of region titles.

“It was somewhat hard and interesting but it was a very good experience,” Barnes said. Her fondest memory is winning the Class 2A lower state final along with having the experience of playing for a state championship.

“This is my 16th year coaching and I never coached anybody like Kimmie,” he said. “It was being able to coach somebody you never had an issue with, never had anything negative and she came to practice ready to work.”

Davis said having two seniors sign with colleges speaks for the talent level of the team.

“The talent level that we had was unprecedented,” he said. “We have a lot of talent and some talent coming back but we’re truly going to miss our three seniors we’re losing this year.”

Barnes said she plans to major in Physical Education. “I plan to coach later on in life,” she said. Barnes already experienced a great deal on winning games. Her Lady Swamp Foxes won 76 games and only loss 12 with her in uniform.

Marion High School principal Daris Gore said was proud of Barnes for all that she has accomplished.

“She is a young lady that embodies a lot character,” Gore said. “She works hard and is very respectful.”

DARLINGTON, S.C. -- Darlington High's Bradley Knox, the reigning Morning News Girls' Basketball Coach of the Year, will now see if he can achi…

FLORENCE, S.C. — A frenzied mass of columbia blue and gold gathered near the pitcher’s mound, as South Florence celebrated what many said coul…

HARTSVILLE, S.C. − Cam Cannarella has done it all for Hartsville – at the plate, and on the mound.

FLORENCE, S.C. — Scotty Keefe is stepping down as athletic director and baseball coach at the end of this school year at Florence Christian.

KINGSTREE, S.C. — Williamsburg Academy scored three in the fifth, and that set the stage for the Stallions' 4-2 win over Lee Academy that clin…

FLORENCE, S.C. -- South Florence's Aydin Palmer struck out 13 batters while throwing a complete-game two-hitter, and the Bruins won 5-0 at hom…

FLORENCE, S.C. − The Region 6-4A champion South Florence Bruins will have their backs against the wall come Monday after a frustrating ending …

FLORENCE, S.C. — Drew Andrews shot a 81 to help Hartsville finish in sixth place at the Class 4A lower state championship at CCSC and advance …

MULLINS, S.C. — It took a couple of innings but the Pee Dee Academy Lady Golden Eagles batters found their groove against the Colleton Prep Academy Lady War Hawks in the first game of the SCISA 2A state championship Monday at home. Allison Carter drove-in four runs, including a solo homer to lead Pee Dee Academy to an 11-5 win.

LEXINGTON, S.C. – Preston McDonald has marveled at the resiliency of his Florence-Darlington Tech baseball team at times this season.

Marion High School senior Kimmie Barnes signs a letter of intent to play basketball at Limestone University on May 3, 2021.

Kimbrie'l Barnes is taking her game to Limestone University to join the Saints women’s basketball program. Barnes was named All State leading Marion as a four-year player.