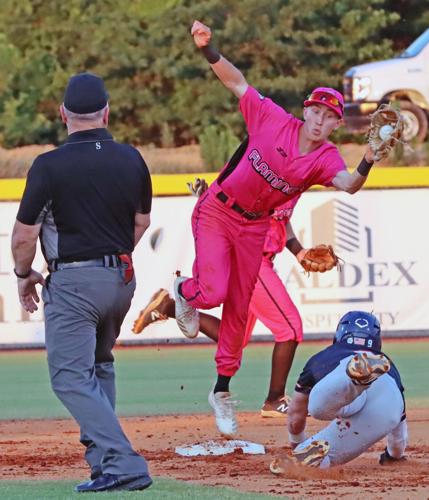 Florence second baseman Jet Weber leaps to field a throw from Flamingos catcher Nathan Housen. But the tag was late on the Lexington County runner. 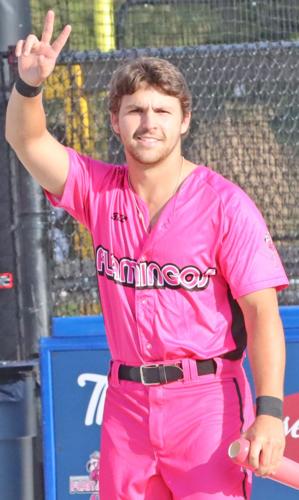 Florence’s Will Hardee walks toward Carolina Bank Field before the start of Saturday night’s game.

FLORENCE, S.C. – Cameron Kovach scrambled inside the confines of Carolina Bank Field as if he was caught in a rundown between bases.

Only on Saturday, he was working his way between fans and employees while getting ready for game time.

He slowed down just enough to talk about his excitement for the Florence Flamingos’ sold-out, home opener at the 1,408-seat park that’s centerpiece to the city’s $16 million baseball and track complex and new home of Florence’s Coastal Plain League baseball team.

That Florence CPL team had been known as the RedWolves until the organization decided on a name change Then, it conducted a public vote that led to the current mascot (complete with a flamingo mascot named “Flo.”)

“It’s exciting to open up this brand new ballpark,” Kovach said. “It’s the home opener, a sold-out crowd. The team is amped up; the office staff is amped up and I hope the fans are amped up.”

It soon became obvious that’s the case as a long line of fans waited for the gate to open at 6 p.m. In spring 2021, ground was broken for this facility to take shape.

“It’s truly remarkable how quickly they got this done and how quality it is,” Kovach said. “If you look around, from the beer garden to the Budweiser Lagoon and the club to everywhere else, it’s great. The fans are really going to be surprised in a good way.”

But Kovach was not surprised with the sellout.

“The game had been a sellout for a couple of weeks, which is great,” Kovach said. “People are really coming on to us, and we have another five to 10 games we’re trying to make into sellouts, as well.”

Florence’s Reggie Sanders (not the former major-league star who also hails from Florence) was happy to be there.

“So far, the field looks nice,” Sanders said. “We went to a RedWolves game when it was at (Francis Marion), and that was really fun. So, the school where my son goes to, they had tickets for things like family day and they enjoyed it the last time. So, we want to come out and support this team.”

“I think it’s neat,” he said. “I think it goes well with (the league’s) theme. There are a lot of crazy names like the (Savannah) Bananas and (Macon) Bacon. I like all the uniforms and stuff like that, so it’s pretty cool.”

Florence’s Chris Lane is joining in on the team concept, as his family is host to three Flamingo players for the summer: Blake Shepardson, Trey Harrison and Scout Updike.

“I can’t wait to see the stadium,” Lane said while waiting in the pregame line. “We’re really excited about the new team. I know that they’re just trying to make changes with the name and the new stadium and everything. I hope the people come out and support this team. The kids are so good and so ready to play ball. I hope the community will come out.”

“The players that are coming from out of town, they don’t have their family here or have the exact connections here in a lot of cases,” Lane said. “So, I think it’s really important that we show them how much we are into the team and what a great city Florence is and how supportive Florence can be.”

“I’m already to go. It’s been a long, exciting wait,” Black said. “I think it will be wonderful. It’s really an improvement over the Francis Marion park, but that was a good park, too. It’s a little closer of a walk from your car here. So, that’s also good.”

One of Black’s grandsons, Ty Fisher, plays for Georgia Southern’s baseball team which clinched a spot in Sunday’s Sun Belt Conference tournament championship. And another one of his grandsons, Cade Fisher, recently graduated high school and signed to continue his baseball career in college with the Florida Gators.

One day, maybe one of Black’s grandsons could play on a CPL team and even play some games in Florence.

Of course, before all the games, someone sings the national anthem. Spartanburg’s Emmy Hepfner had that honor Saturday at Carolina Bank Field.

“I like watching everybody go to home plate when they have made a home run,” Hepfner said. “And, I like the Flamingo mascot a lot.”

Then, arriving for a pregame meal were Florence’s Shannon and Maria Hardee. They spent the daytime watching one son, Jake, play American Legion Baseball for Florence Post 1. Then, they spent Saturday night watching another son, Will, start for the Flamingos.

“We’ve been rather busy. Lots of baseball, but fun times,” Maria added. “This is our first time here, but it’s really nice. It’s going to be fun. Lots of people here, there’s a good crowd, good food. And, we get to see some good baseball.”

The Flamingos were 0-2 going into Saturday.

At game’s end, 4 hours and 13 minutes after the first pitch, Florence lost 14-11 to Lexington County. The Flamingos are now 0-3.

However what the Flamingos also did was become part of something important to Florence for several reasons.

“Hopefully, it’ll attract more people,” Shannon said. “There weren’t as many at the RedWolves games at Francis Marion. Hopefully, with the new stadium and everything, we can draw a crowd.”

A 12-time APSE national award winner, Scott authored, "70 Years of Thrills and Chills, Drama and Dents at Darlington Raceway." Scott has received several SCPA awards, 9 for 1st place since moving to SC in 2010 from his home state of Georgia.

FLORENCE, S.C. – Brian Hickman is not superstitious. But before the Hartsville Middle School principal putts, he makes sure to read his ball marker.

FLORENCE, S.C. – Title IX was in its infancy while Sylvia Hatchell coached the Francis Marion women’s basketball team, and Pearl Moore was her…

FLORENCE, S.C. — Florence Post 1 broke a 1-1 score in the bottom of the third with two runs. Coach Derick Urquhart’s team never looked back an…

FLORENCE, S.C. — The Florence Flamingos scored three in Monday’s third inning, and that held up for a 3-2 win over the Savannah Bananas at Car…

Kemp DeWitt finds fun in the game of golf

FLORENCE, S.C. – Kemp DeWitt began playing golf in the eighth grade at Trinity Collegiate. He was part of the Titans’ third-place team in the …

MACON, Ga. — Macon scored three in the first and made it hold up for a 5-2 win Friday night over Florence. The game was called in the fifth in…

U.S. swimmer rescued by coach after fainting at world championships

U.S. swimmer rescued by coach after fainting at world championships

Florence second baseman Jet Weber leaps to field a throw from Flamingos catcher Nathan Housen. But the tag was late on the Lexington County runner.

Florence’s Will Hardee walks toward Carolina Bank Field before the start of Saturday night’s game.