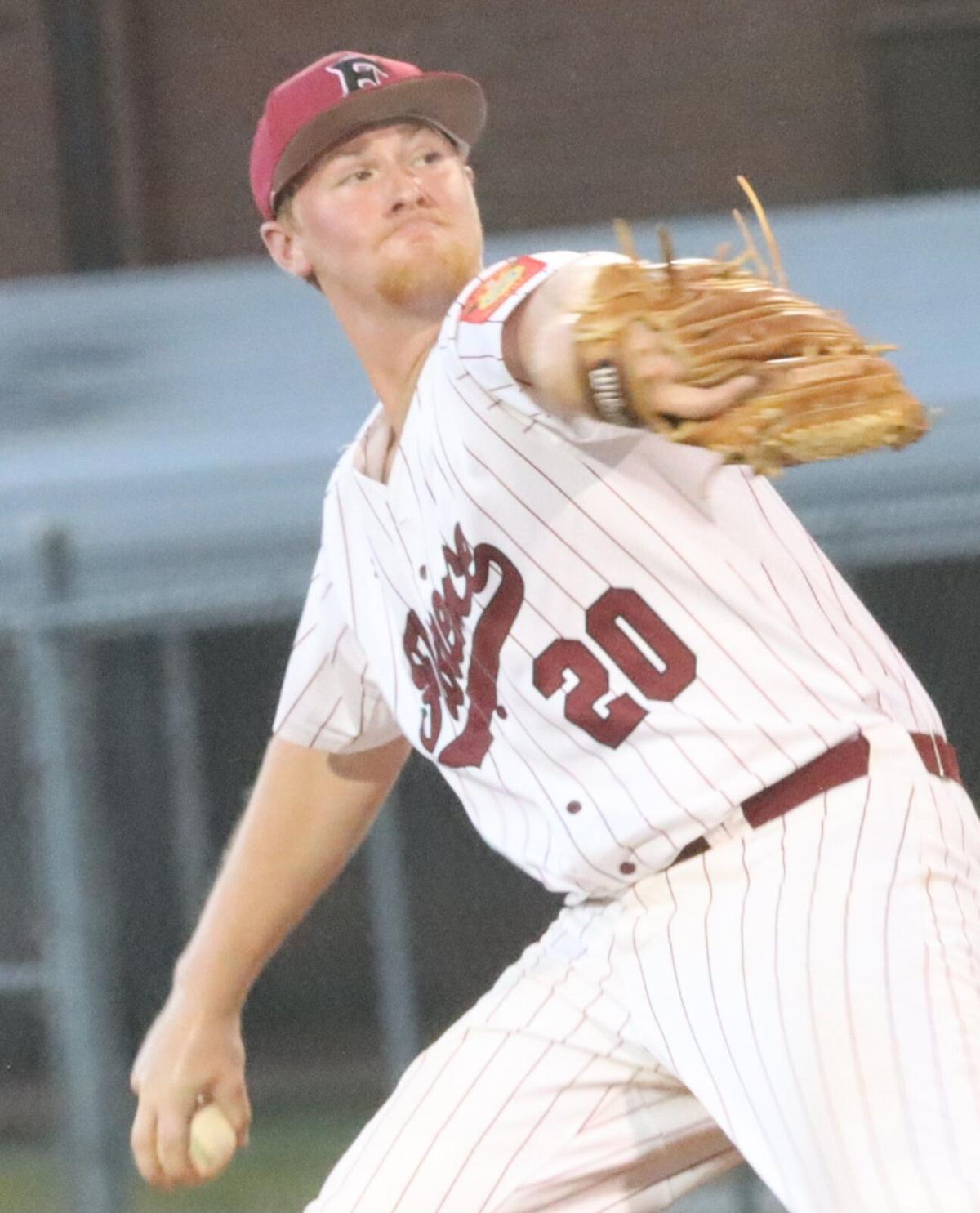 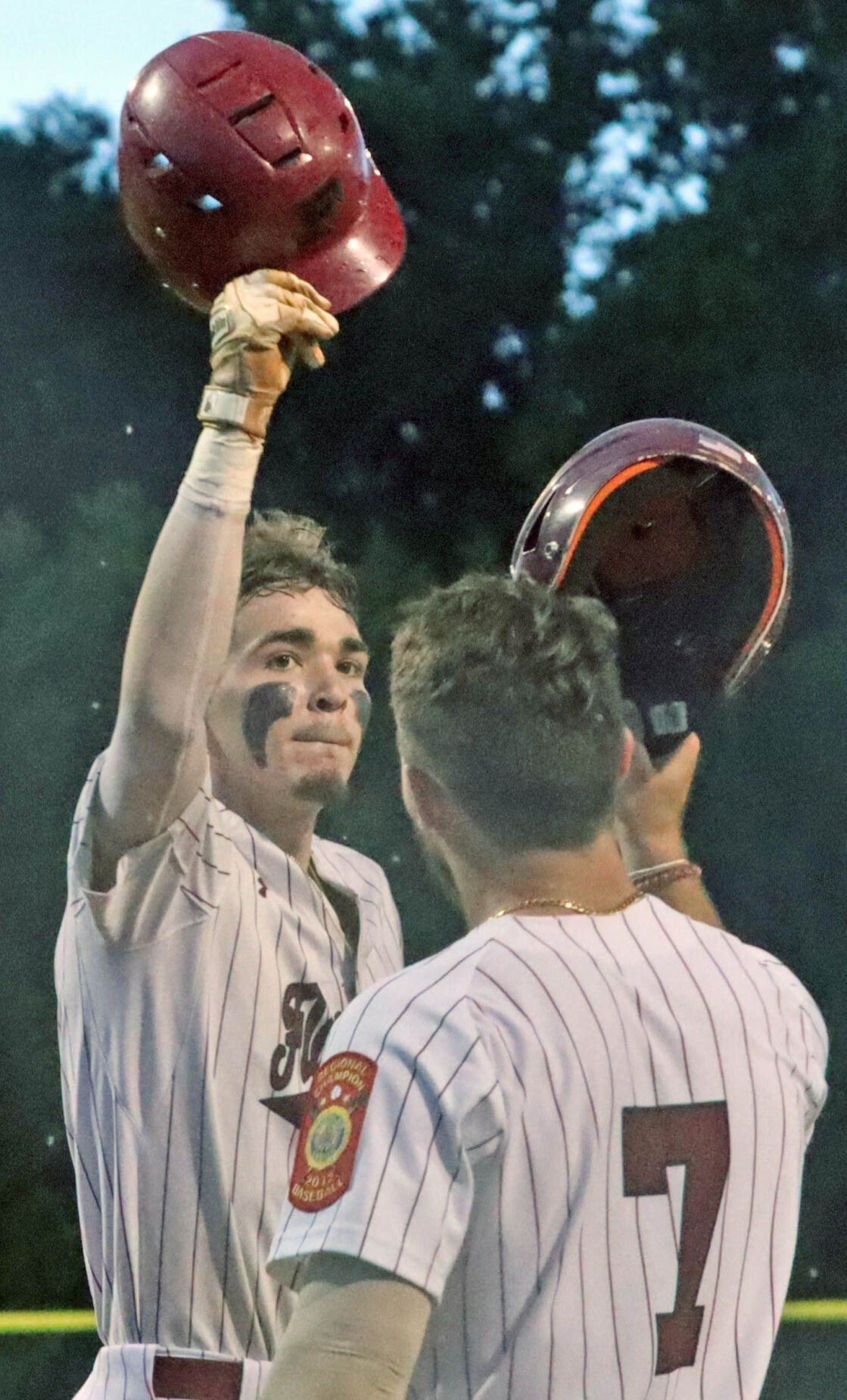 Florence’s Owen Taylor is congratulated by teammate Noah Carter (7) after hitting a two-run home run in the second inning Monday.

FLORENCE, S.C. – Florence’s Robbie Jordan was three outs away from a no-hitter Monday after striking out eight batters during the first six innings.

With Post 1 leading 7-1 going into the top of the seventh against Manning-Santee, Florence coach Derick Urquhart substituted Jordan for closer Thomas Skipper.

“(Jordan) had some more pitches and could have gone out in the seventh, but he was up to 90 pitches, and we had Skipper ready,” Urquhart said. “(Skipper) is our closer for a reason, so we made the decision to go ahead and make that change. He didn’t throw last week at all, so we felt like we needed to get him an inning tonight.”

Manning-Santee scored two runs against Skipper, but that was it, and Florence won 7-3. Game 2 of the best-of-three series is 7 p.m. Wednesday in Manning.

Those two runs, however, were enough to agitate Urquhart, knowing his team faces that same team on the road in Game 2.

“Thank goodness (for the 7-1 lead after six innings), because we didn’t play well that last inning,” said Urquhart, whose team is now 26-2. “I was a little disappointed in the way we played tonight. As well as we had played in the past couple of weeks, tonight was not our best night.”

Although weather forced the game to start 30 minutes later, and move it to South Florence High School, Jordan still felt right at home as he struck out the side in the third, and almost did it again in the sixth.

Florence took command at the plate in the second with a Noah Carter double, followed by an Owen Taylor home run − his eighth of the summer. Kody Hanna’s bloop single in the third brought home another run, and Florence took a 4-0 lead when Jacob Adams hit into a fielder’s choice. Adams finished the game 2 for 3.

“We always try to play with the lead and then put it in the hands of our pitching and defense late in the game,” Urquhart said.

After Britton Morris scored on a wild pitch for Manning-Santee in the fifth, Florence responded with three more in the bottom of the sixth.

Post 1 increased its lead to 7-1 with RBI singles by Caleb Rogers and another run-scoring single by Hanna. Also, Parker Winfield scored on a wild pitch.

But to start the seventh, Skipper hit Manning-Santee’s first batter, Colby Newton. Next, Jarian Pinckney got his team’s first hit of the night, and the two runners advanced to second and third on a throw home.

Manning-Santee added runs on a sacrifice fly by Morris and an RBI single by McKrae Ard. But Skipper closed the game with two strikeouts.

Detroit Lions embrace being underdogs in 2021

Detroit Lions embrace being underdogs in 2021

FLORENCE, S.C. — Former West Florence star pitcher Akeem Bostick, has been called up to join the New York Mets for their game tonight against …

By the end of business Monday, Texas and Oklahoma could officially be headed out of the Big 12, putting the conference on life support.

Bob Bowlsby has a message for ESPN: Stop trying to break up the Big 12 Conference.

FLORENCE, S.C. — The Francis Marion University volleyball program learned Monday that it has earned a Team Academic Award for 2020-21 presente…

Florence’s Owen Taylor is congratulated by teammate Noah Carter (7) after hitting a two-run home run in the second inning Monday.