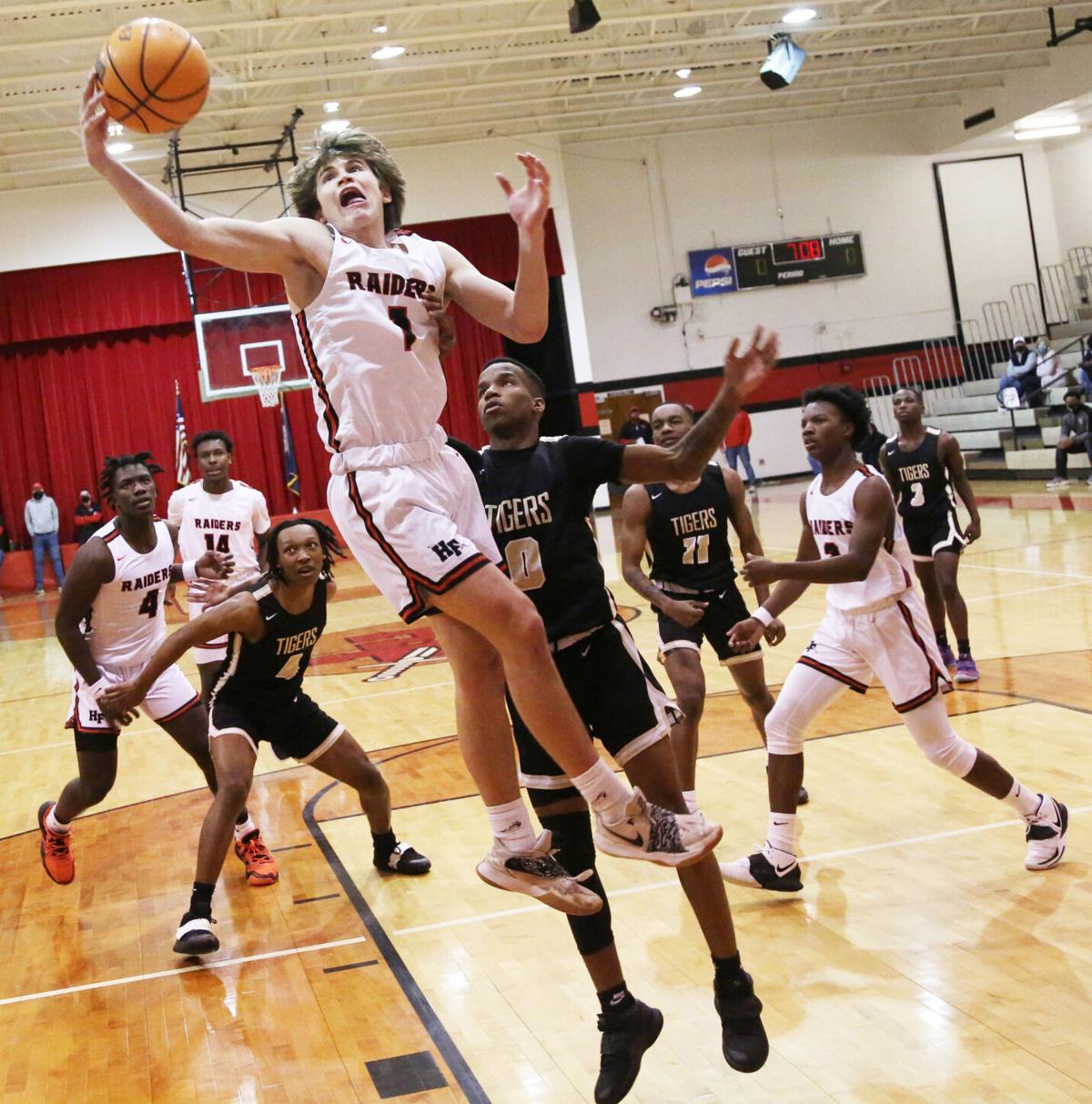 Hannah-Pamplico's Zander Poston (1) grabs a rebound during the Raiders' 50-47 victory over Allendale-Fairfax on Saturday in the opening round of the 1A state playoffs. 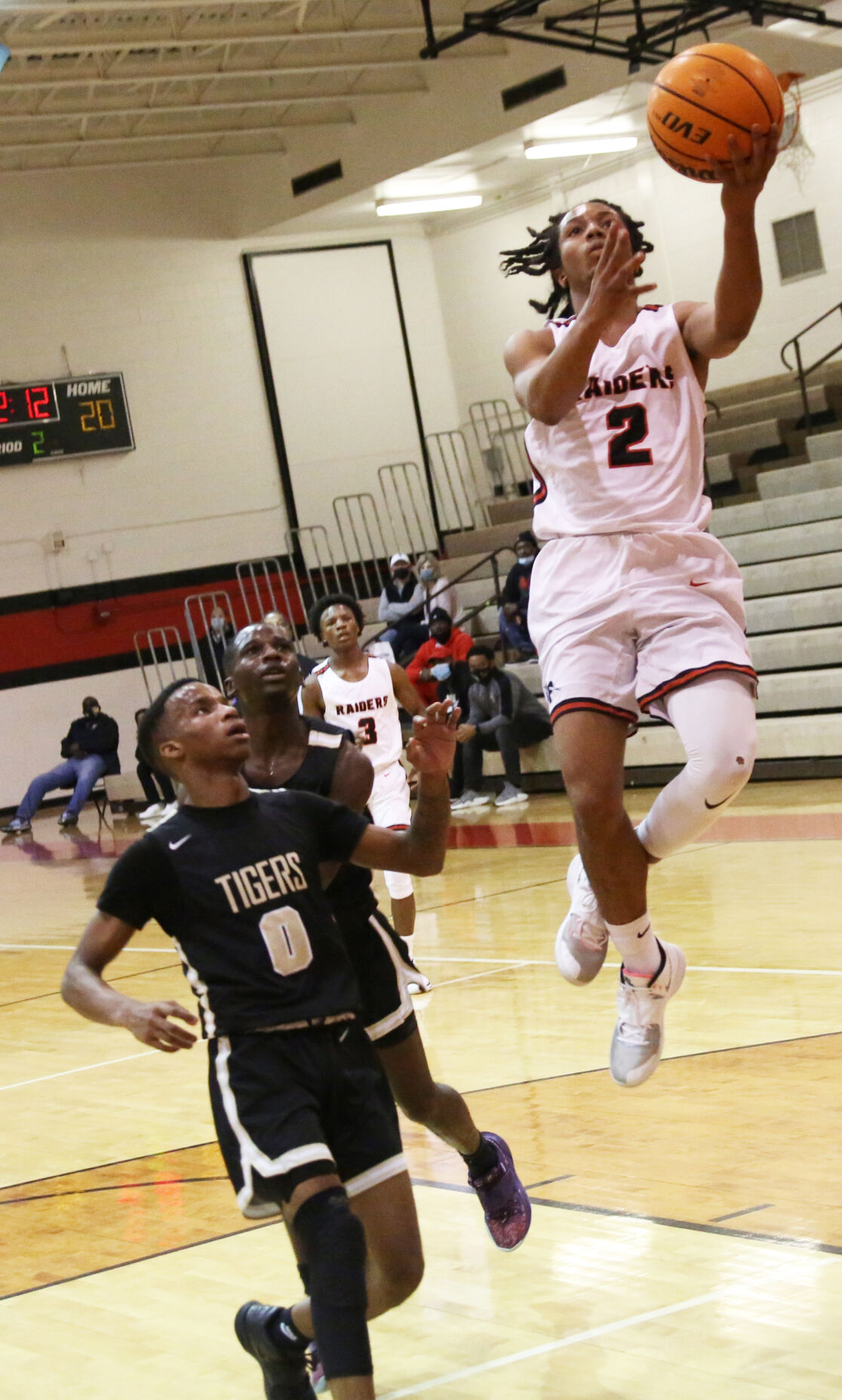 Hannah-Pamplico's Davian Coaxum (2) goes up for a shot during Saturday's playoff game against Allendale-Fairfax.

“We wanted to live to fight another day,” the Hannah-Pamplico coach said. “So we kept breathing.”

Everyone else likely held their breath in the final moments of the Raiders’ 50-47 victory over Allendale-Fairfax as a late run by the Tigers put a scare into the Region 5-A champs.

But a strong defensive effort most of the night — including a huge game on the boards — helped H-P hold on for the win. Next up is a trip to Summerton to face Scott’s Branch in the second round on Wednesday with a tentative game time set for 7 p.m.

Saturday’s contest was likely much closer than it could have been thanks to a tough night at the charity stripe for the Raiders (12-1).

“We struggled at the free throw line,” said Williams, whose team missed 13 of 19 shots from the line. “Give Allendale a lot of credit because they didn’t stop. Shawn Jones is a great player for them.

“We struggled at the line, but we played good defense and in the end it came down to a couple of free throws and we were able to pull through.”

H-P nearly saw a 10-point lead evaporate in the final minutes. The Tigers went on a 12-5 to close out the contest, getting as close as 49-47 at one point. But Vincent Jackson’s free throw with less than 20 seconds gave the Raiders a 3-point cushion. Jones, who led all scorers with 25 points, put up a desperation trey moments later but to no avail.

Jones was the only player to reach double figures for the Tigers while H-P’s Cyrus Ellison, Davian Coaxum and Zander Poston led the charge offensive for the Raiders — and on the boards as well.

The trio combined for 39 points including 21 in the first half. A 10-0 run in the opening stanza gave H-P a lead it did not relinquish and the Raiders held a 25-16 advantage heading into halftime.

Ellison led the way with a team-high 15 points and also added 18 rebounds. Coaxum followed with 14 points and Poston ended the night with a double-double of 10 points and 12 rebounds.

A-F never got too far behind though. The Tigers trailed 28-16 at the start of the third quarter and were down by 10 at various points until their final run. Jones led the charge with 10 points in the final stanza, including a 3-pointer.

Combined with a change in defensive philosophy, it was enough for the Tigers to make things interesting in the second half.

“They came out in the second half and played an in-your-face-man-to-man defense,” Williams said. “A lot of teams haven’t really played us that way this year, so our guards had to get used to that. Once they settled down and realized they just had to go by their man and get an assist to our bigs, we started to be OK.”

Hannah-Pamplico's Zander Poston (1) grabs a rebound during the Raiders' 50-47 victory over Allendale-Fairfax on Saturday in the opening round of the 1A state playoffs.

Hannah-Pamplico's Davian Coaxum (2) goes up for a shot during Saturday's playoff game against Allendale-Fairfax.