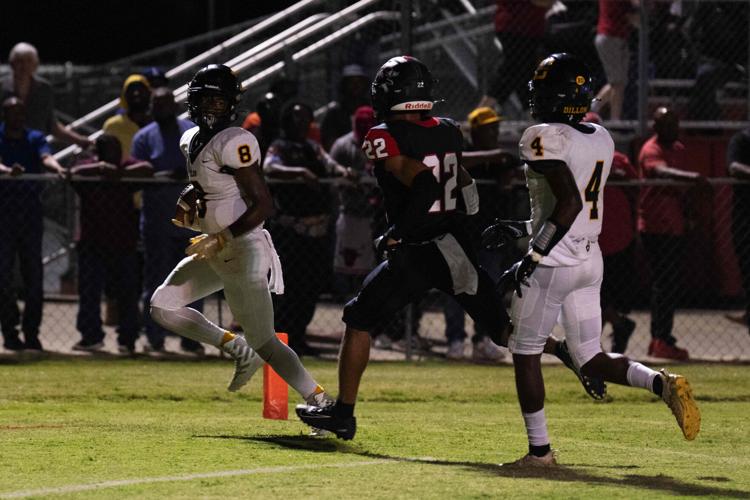 Dillon’s Ty Martin (8) scores a touchdown during Friday’s 59-35 victory over Hartsville in Kelleytown. 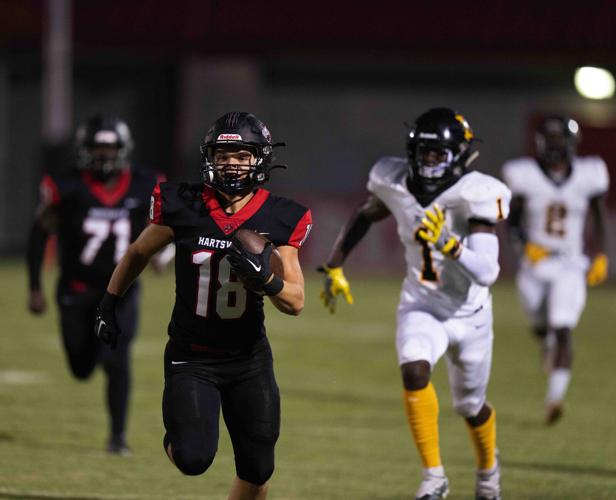 Hartsville’s Cole Winburn (18) breaks free for a touchdown during Friday’s game against Dillon.

KELLEYTOWN, S.C. – There have been whole regular seasons in the past, Kelvin Roller admitted, where the Dillon High football team faced little to no adversity on its way to the state playoffs.

That was something Roller was looking to change with a beefed up schedule, and Friday night in Kelleytown certainly provided its share of adversity for the Wildcats.

But for the second straight week, Dillon was able to not only face that adversity, but conquer it.

Down 20 points in the second half, the Wildcats used a couple big defensive plays to swing the tide of the momentum and then rode a dominant rushing attack to a 59-35 victory over Hartsville.

It was the first meeting between the two former annual rivals since 1995 – also a Wildcat victory.

Dillon (3-0) will travel to Socastee next Friday evening while Hartsville (3-1) will look to rebound from its first loss on the road against Irmo.

“I’m just proud of them – the way they came back in the second half and played Wildcat football,” Roller said of his team. “…We felt like we left some plays out there offensively in the first half. We struggled stopping them in the first half. I think scoring that touchdown late helped the kids keep their heads up and understand that it’s a long football game and we can move the football – we just gotta make some plays that were out there.”

Dillon got nothing out of its first three drives, despite two ending in Hartsville territory. Ty Martin’s 17-yard touchdown pass from Josiah Oxendine with 33 seconds left kept the Wildcats from being shut out in the first half and gave them a needed jolt heading into the locker room.

But Hartsville began the second half much as it had the first – marching down the field for a score. Carmello McDaniel scored the second of his two TDs on the night to open the third quarter as the Red Foxes built a 28-8 advantage and seemingly had full control.

The offense had been balanced behind McDaniel and quarterback McKendrie Douglas, who ran for one score and also threw for another while connecting on 3 of 5 passes for 125 yards in the first half.

But that was the last time HHS’ offense found the end zone as Dillon was able to take advantage of a couple of miscues to shift the momentum in its favor.

After Martin scored to pull the Wildcats back within 28-14, an interception on Hartsville’s next drive was returned to the HHS 4-yard line by Jamorian Fling. Martin followed with another short TD run and all of a sudden, Dillon was down just one score – 28-21.

“We made some plays early in the passing game,” Hartsville coach Jeff Calabrese said. “We knew we were going to have to do that. We had the pick and that’s when it all kind of starting tailing off a little bit. We couldn’t get our wheels back on track, and I think Dillon…the momentum kind of swung to their side and their kids got excited and elevated and we dropped too much.

The Red Foxes got a quick boost when Da’Marion Coe returned a kickoff 79 yards for a score to close out the third quarter, but Dillon responded with four rushing touchdowns in the fourth.

Fling scored twice, Chris McCollum scored the second of his two TDs on the evening and Martin wrapped up his big game with a 48-yard TD score. He led all rushers with 28 carries for 286 yards and a combined four scores.

“We came out and we played a bad first half,” Martin said. “But we found stuff that worked, put it in and figured out that it worked and kept running it back to back. They couldn’t stop it from then, so we were good after that.”

There was no panic in the locker room at halftime, Martin said, just a focus on making plays.

“At first we were down, but we were like, ‘Alright somebody make a play.’ We get up – we get up in spirit and when we do that, it’ll take off from there.”

Fling had 133 yards rushing for the Wildcats. The Dillon defense was also able to contain Hartsville running backs Carmello McDaniel and J’Shawn Anderson – holding the duo to less than 100 yards on the ground combined.

NEXT GAME: Hartsville travels to Irmo next Friday while Dillon will be on the road at Socastee.

KELLEYTOWN, S.C. – Ty Martin rushed for 286 yards and accounted for four touchdowns as Dillon rallied in the second half for a 59-35 victory o…

Dillon’s Ty Martin (8) scores a touchdown during Friday’s 59-35 victory over Hartsville in Kelleytown.

Hartsville’s Cole Winburn (18) breaks free for a touchdown during Friday’s game against Dillon.