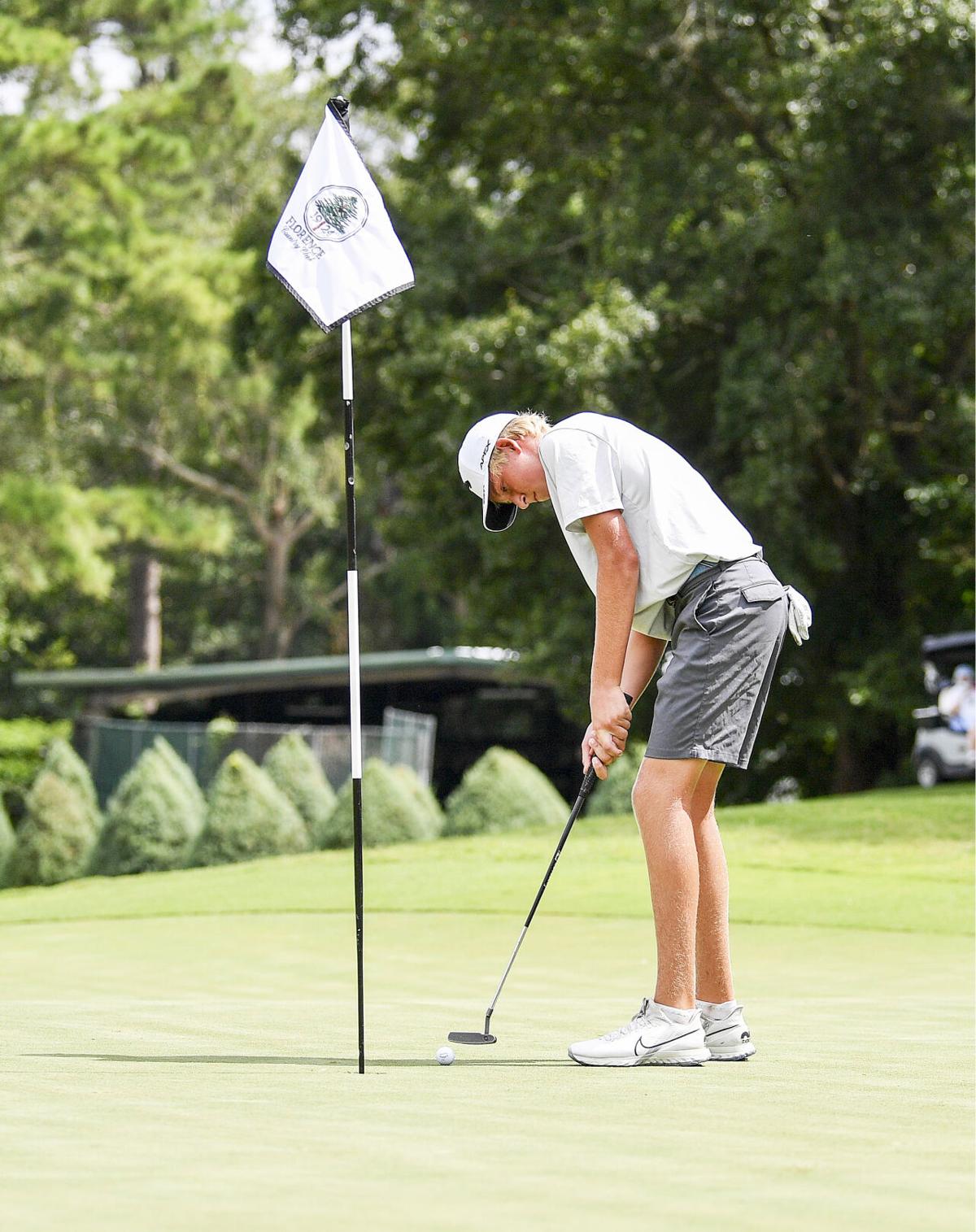 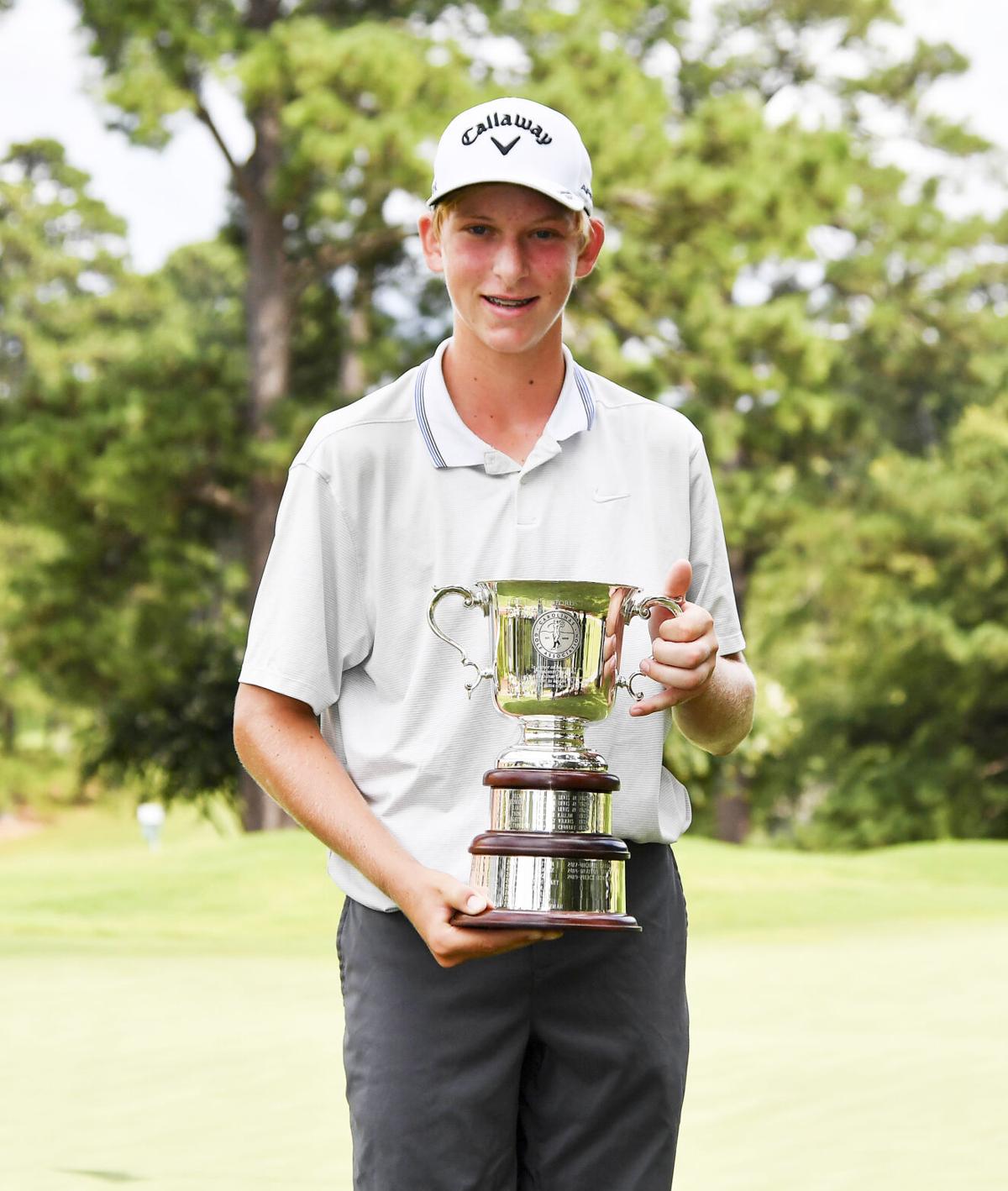 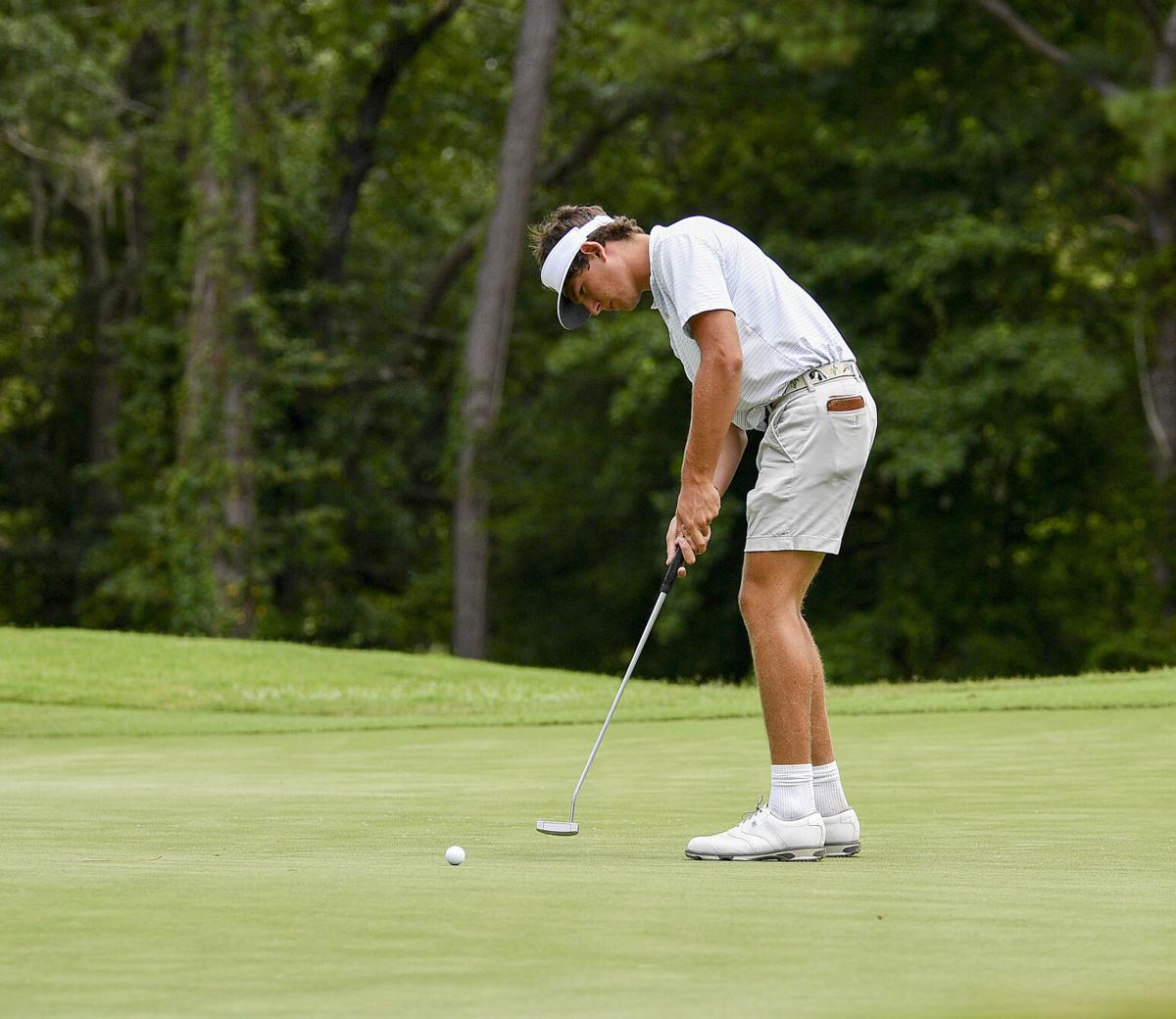 Trinity-Byrnes' Gene Zeigler putts for eagle on the 14th hole during the final round of the 71st Carolinas Junior Boys' Championship on Thursday at Florence Country Club.

Trinity-Byrnes' Gene Zeigler putts for eagle on the 14th hole during the final round of the 71st Carolinas Junior Boys' Championship on Thursday at Florence Country Club.

FLORENCE, S.C. — William Jennings could only look on as a bystander while the last group made its way to the 18th green Thursday at Florence Country Club.

“It was nerve-wracking,” said Jennings, who's from Greenville. “I’d say nine times out of ten I wouldn’t have been in a playoff, so it was a relief when I knew I had a chance.”

Chance became reality as Gene Zeigler, who entered the day one shot off the lead, bogeyed the final hole to send the pair into a sudden death playoff.

Jennings capped off his remarkable two-day comeback with a tournament-clinching birdie on the second hole to capture the 71st Carolinas Junior Boys’ Championship.

“I was 3-under through six, after making a 30-footer on No. 6,” Jennings said. “So I knew I gave myself a chance after that. I had two bogeys the next two holes which really hurt, but I just played solid the rest of the round and didn’t make many mistakes down the stretch.”

Not making mistakes was pretty much the story of Jennings’ final two rounds. He was 2-over before shooting a second-round 64 on Wednesday to pull within four strokes of Thursday’s leader, Griffin Tarver.

Despite another solid round, he was still looking up at Zeigler for most of the day. The Trinity-Byrnes standout was 3-under through nine after making an eagle on the fifth hole. He overcame back-to-back bogeys on 12 and 13 with another eagle on 14.

“Coming back on 14 with that eagle, regardless of how I finished, that’s confidence,” Zeigler said. “After making two bogeys — momentum’s not in my favor. So it felt good to be back out there and competing. I haven’t been able to compete and been trying to make cuts for a month and a half.”

A bogey on 16 left Zeigler with a one-shot lead, which he carried into the final stretch. An errant shot toward the green overflew the hole and landed near the Carolinas Golf Association tent, however. But Zeigler managed to salvage the hole with just a bogey to force the playoff.

“I made sure to hit a club that wouldn’t go over the green and caught basically what we call a jumper, which the ball comes out high with little spin and flies way further than you’d expect it to,” Zeigler said. “That’s what happened there, and I was actually fortunate I could play it from where I did.

“…It happens. It was an unlucky break.”

Zeigler appeared to have the upper hand on the first sudden death hole with a much shorter putt for birdie, but Jennings managed to sink a 12-footer to keep the playoff alive. A great shot from the fairway on the second hole led to a short putt for birdie and the overall tournament crown.

“The second (hole), I only had 190 yards in, so I knew if I put in on the green I’d have a good chance of winning, and I did just that,” Jennings said.

Hilton Head Island’s Max Green shot a 68 on Thursday to finish in third place (-6) while Tarver wound up fourth (-5).

Hartsville’s Daniel Coker finished 1-over to win up tied for 15th overall while Florence’s Pake June (+6) and William Phipps (+6) tied for 28th.