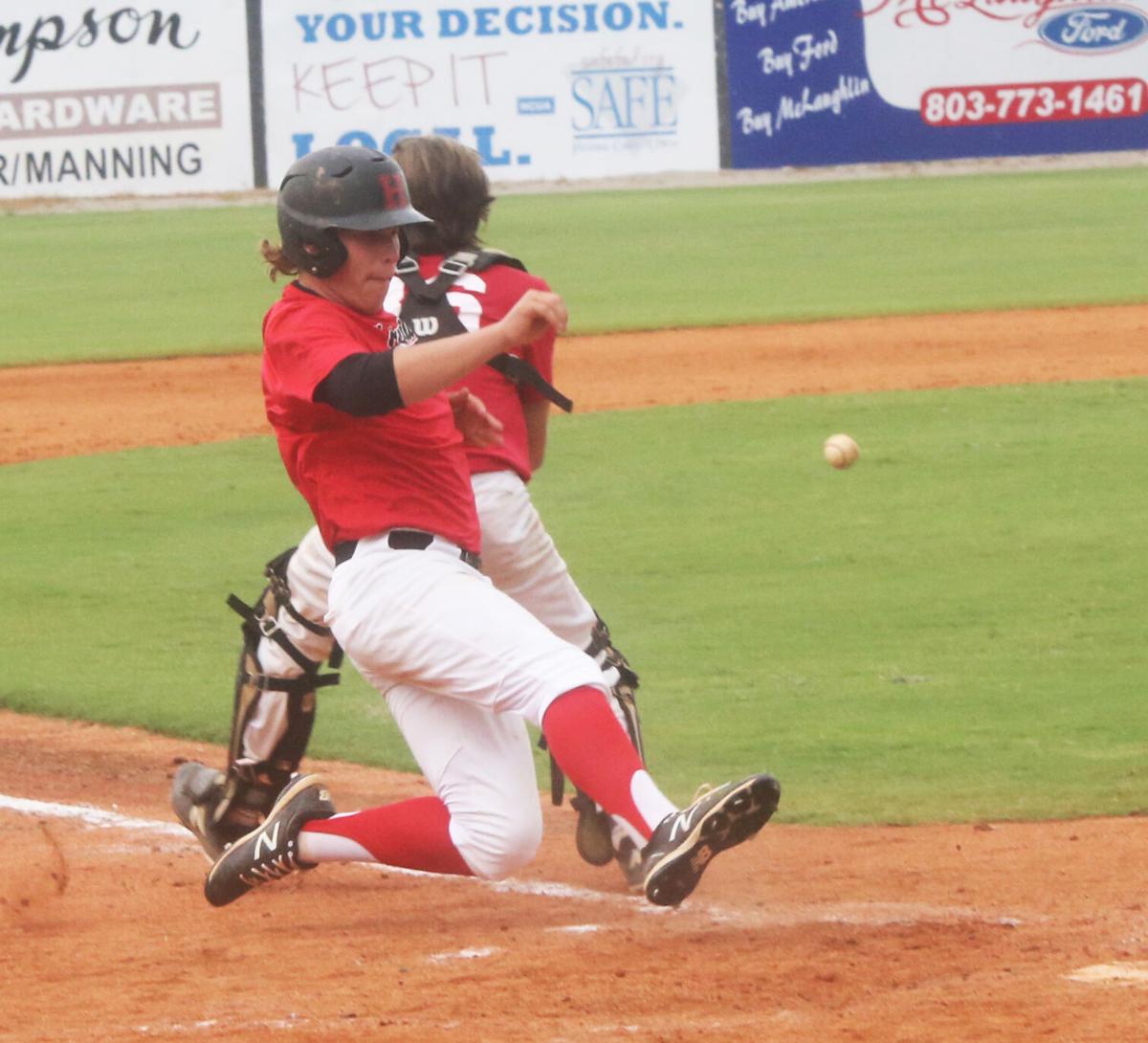 Hartsville's Michael Norris (front) slides and scores during Thursday's 17-7 victory over Rock Hill in the junior state tournament at Riley Park in Sumter. 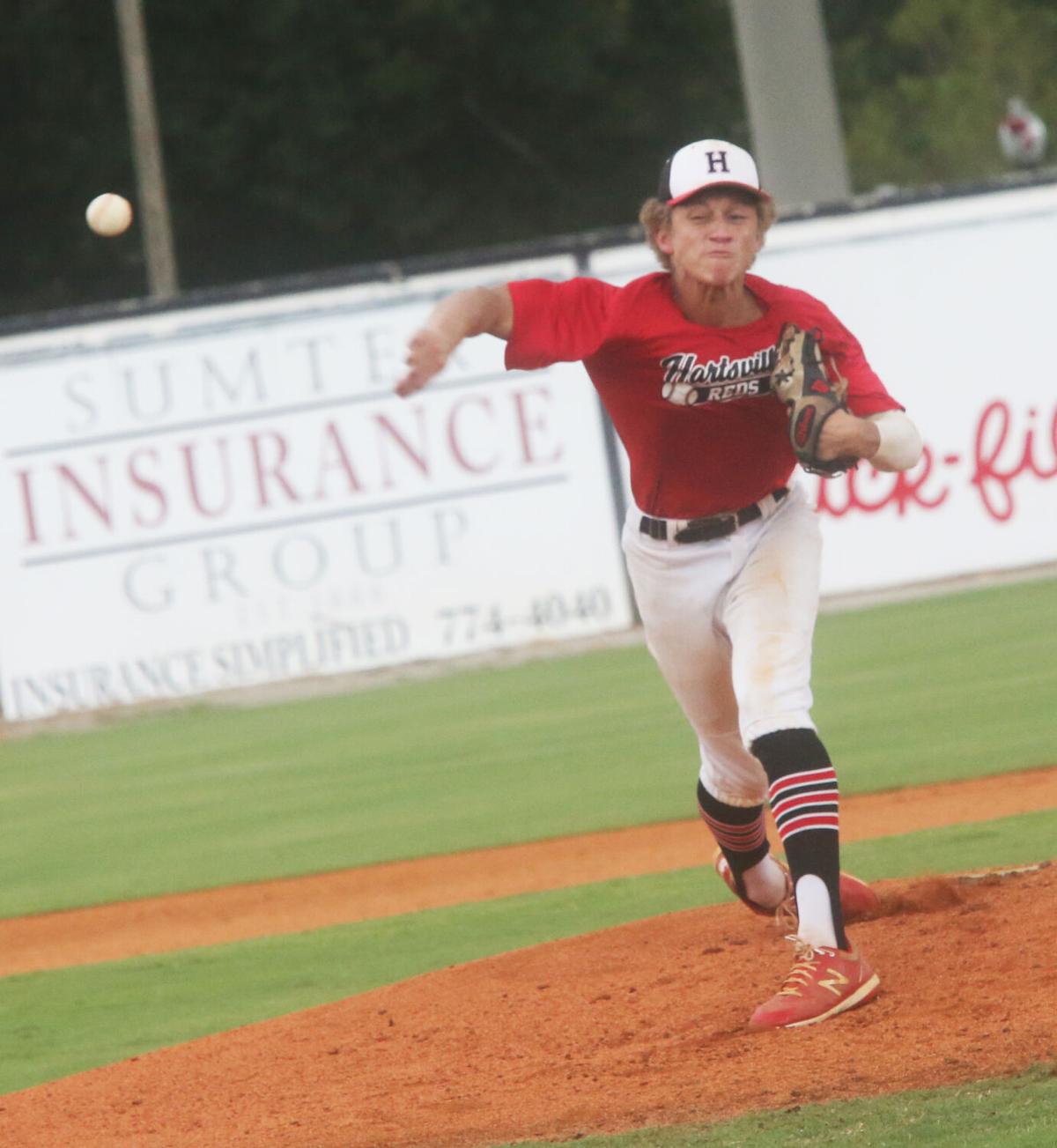 Showing patience at the plate, Hartsville took advantage of 18 walks, three hit batsman and eight wild pitches en route to a 17-7 victory over Rock Hill at Riley Park in Sumter.

It was the 12th win in a row for Hartsville (12-5) following an 0-5 start and puts the Reds in the winner's bracket for a 4 p.m. matchup Friday against the Florence Green/North Augusta victor.

"I'm super proud of these guys," Gainey said. "We're short-handed a little bit; our numbers aren't big, but they just came out ready to play today. They were really patient. (Rock Hill) had trouble throwing strikes to start with and we just stayed with it."

That was the one aspect that showed Gainey how much his squad has matured since the start of the season.

"They've grown," he added. "Earlier in the year, we would have gone out and helped their guys and swung at things we shouldn't have. Today we were patient and made them throw strikes."

Hartsville was also able to persevere through a little adversity. The Reds looked dominant early on, taking a 7-0 lead behind an opportunistic offense and a dominant Cam Cannarella on the mound.

Cannarella breezed through the first two innings, recording five strikeouts in the process, but a weather delay in the third inning wound up getting the Hartsville right-hander out of his rhythm it appeared as Rock Hill used three hits, a walk and an error to pull back within 7-4.

"Cam's a great athlete, and we weren't really concerned, but that does happen," Gainey said. "...I don't think he ever got back as sharp as he was at the beginning, but he was good enough today."

Rock Hill put up three more runs in the fifth, but that was it as Cannerella and Harrison Moore shut the door the rest of the way. Cannerella wound up striking out 13 in six innings of work.

Meanwhile the Hartsville offense continued to take advantage of having multiple runners on in nearly every inning. Ryan Jordan had the big day going 4 for 5 with two doubles and five RBI. He drove in a run in all but one of his at bats.

Roddi Morris had an interesting day at the plate. He went 1 for 1 with four walks and was hit by a pitch — reaching base in all six plate appearances and scoring four times.

Collin Reason drove in a pair and scored twice for Hartsville while Cannarella walked four times, had a hit and scored two runs.

Michael Norris and Treion McFarland each collected an RBI while Garrett Parker drove in two and scored a pair.

TIMMONSVILLE, S.C. – Carlton Graham believes his Timmonsville boys’ basketball team has what it takes to compete in Region 5-A.

FLORENCE, S.C. − As a father of three young black men, I truly understand the importance of my sons knowing the burdens that come with their s…

Hartsville's Michael Norris (front) slides and scores during Thursday's 17-7 victory over Rock Hill in the junior state tournament at Riley Park in Sumter.